270 gyuto just as good or better than a sujihiki?

Recently I bought a relatively affordable 270 gyuto just 'to try the length'....and also as an experiment to see how well it'd do as a slicer compared to sujihikis. So far my preliminary conclusion is... it gives me the same stiffness that's missing in a lot of the thinner & lighter sujihkis, and as a slicer I haven't really noticed any downsides. The extra height actually makes it easier for me to judge the direction I'm cutting.
Am I missing something here or did I just discover something blatantly obvious?
Discuss!

Taller blades have more drag passing through food, which will mostly matter when the food is relatively thick. Probably not much difference between a gyuto and sujihiki when slicing a thin steak, but maybe a big difference for large roasts. …at least in my experience as a home cook.

I have and use both a 270 gyuto and a 270 suji. The suji is far better at slicing. Where I notice this most is thinly slicing raw beef across the grain. The gyuto pulls at the end of the cut and leaves a tail on the hunk of meat I’m slicing.

In my experience, the type of grind that optimises a meat cutter (assuming you’re only using it to cut meat) makes it worse at cutting vegetables, which is why it can make sense to have a specialised knife just for meat

You can of course slice with a gyuto and in a pinch I've done it. Likewise you can chop with a suji and I've done that as well. But neither alternative uses is optimal. Grinds, taper, etc all play roles.

I slice a couple dozen steaks a week and nothing compares to a sujihiki for the task. The grind and the height make passing through protein a pleasurable and efficient experience.

pgugger said:
Taller blades have more drag passing through food, which will mostly matter when the food is relatively thick. Probably not much difference between a gyuto and sujihiki when slicing a thin steak, but maybe a big difference for large roasts. …at least in my experience as a home cook.
Click to expand...

I agree, but you might not notice it too much on even large roasts unless your aim is to slice something super thin. To me, that is where it really shows how the low height really makes a big difference in reducing drag. Don't get me wrong, the drag is still there when you cut thicker slices, I just don't think you necessarily notice it as much. For example, after I've let a grilled flank steak rest, I am typically cutting not only as thin as possible against the grain, but also at a severe bias holding my suji at a very small angle in reference to the cutting board. The physics of this is even more obvious when you are slicing something really delicate like gravlax, and when you see pros do this behind the counter they are often using something with even less height than your typical suji, like this WTS - Thiers Issard Sabatier (elephant) 300mm 'salmon' When you do something like that with a taller knife, it tends to tear the product a bit and makes a bit of a mess.
Last edited: Dec 4, 2022

Depends on the tip profile, as long as the tip is pointy and narrower, because I only use front half of the blade for slicing tasks. One of my 270 gyuto cuts better than my 270 Sujihiki K-tip on certain slicing tasks because of narrower tip.
J

I have a 270 Konosuke HD2 gyuto and a Kono HD2 300 sujihiki and the difference when cutting through protein is pronounced. The suji really glides through meat much easier. I do a fair amount of breaking down larger hunks (e.g., boneless rib roast into steaks) and even then, the sujihiki is superior, and it just gets better when slicing thin.
R

For cooked dense meats, the extra surface area on a gyuto can drag quite a bit more.

I find a good stiff Sujihiki really good at portioning meat and large roast, my Tadokoro is great when I buy a whole chunk of beef or pork for a roast. Tho I rarely cook those so I might be selling it soon to cover my other impulse purchases...
G

For slicing meat specifically the suji is better because of the drag mentioned above. However especially in a pro environment sometimes it’s good to have versatility. I like sujis that are a bit taller, which provides the stiffness even if thin and also makes cross utilization easier; but we are talking like 40mm not 50-55+ for a gyuto. Examples Kurosaki and Shiro Kamo. Taper also provides stiffness, examples Hinoura and Mazaki (at least my Maz, from the stainless batch a few years ago.

You could have a custom gyutohiki made if you Really want that one knife to do most things.
T

What type of grind is optimal for a meat slicing suji?

I signed myself up for some prep today to put a suji (HSC ZWear) against a gyuto (Gengetsu Stainless/Stainless) for slicing a dicing a couple pre-cooked beef roasts.

The suji sliced with maybe half the effort of the gyuto, did a neater job, and was the knife for the job. The Gengetsu is certainly no slouch but was not nearly as well suited for the task.

Gengetsu. Had to make an extra cut to only deal with half the product that I cut with the suji. Still required more force.

And fwiw, the next task was cutting up a case of cooked chicken breasts for a chicken caeser salad 2morrow. The suji was out of place (though useable) but the gyuto was great.

They all have their place, but a sujihiki is designed for slicing protein.

Here is one of my favourite sujihiki series pics … is this knife a “Gyutohiki“? Possibly, but it sure cuts beautifully. Depth at heel is 50mm. Your call I guess. Each portion was cut with a single long stroke, no residual attachment. 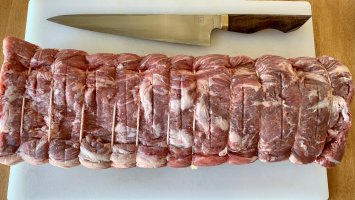 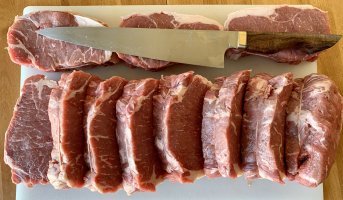 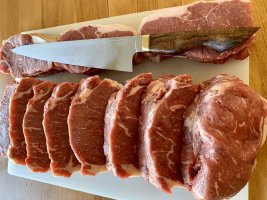 Maybe I'm just really unobservant but I'm still struggling to really notice any downside from using the gyuto. FWIW I have 2 270 sujihikis that I've used for a while (Fujiwara FKH + Mazaki Kasumi). Between those 2 I've always preferred the Maz simply because it's a lot stiffer, but it's also significantly taller.
But compared to a cheap and humble 270 Carbonext gyuto (admittedly not the tallest knife around at 52mm) I'm struggling to see why I'd grab the suji. It has the same stiffness I'm looking for but so far I'm not notice any tearing or dragging.
Maybe it makes a bigger difference when you're doing filleting stuff or trying to cut waferthin slices of anything, but I tend to cut slices at least 5mm thick.... similarly for trimming meat I use shorter stuff.
Not that I'm complaining, but I kinda expected there to be more of a difference?

As with anything in specialised knife land, your return on investment will generally be pretty limited unless you’re doing specialised work

Gyutos are absolutely fine for general meat cutting duties (heck, that’s why the Japanese made their own version of the sabatier in the first place) but the general short height + stiffness of most sujis will give you an advantage if you’re trying to make really fine cuts, where drag begins to matter lest you end up tearing your product

To me, it’s somewhat similar to the comparison of a sujihiki vs. yanagiba - the yanagiba will provide that bit of incremental performance that probably matters if you cut delicate sashimi professionally, but probably doesn’t make that much of a difference if you’re just making coarse cuts of fish

Exactly. What proteins you cut, how thin you want to cut it and the quality of cutting you want, etc.

I noticed no one mentioned Fish here either. Sujihikis make a big difference on fish (especially sushi imo). The drag from a taller blade can rip/damage delicate fish or create unclean cuts. I have a separate sujihiki for cooked/crusted proteins that I rarely use but I use my fish one a lot more.
G

Even if you get a good cut with two knives, sometimes differences in weight and balance and height and thickness really make the difference when you’re doing a lot of something. Slicing a pound slab of bacon vs 3 whole bellies, a 5lb brisket flat vs a case of briskets, etc.

eta: so on the small scale end of things it very well might not always make a difference.

from The Netherlands, EU.

refcast said:
For cooked dense meats, the extra surface area on a gyuto can drag quite a bit more.
Click to expand...

Noticed the same, especially with pork.

GorillaGrunt said:
Even if you get a good cut with two knives, sometimes differences in weight and balance and height and thickness really make the difference when you’re doing a lot of something. Slicing a pound slab of bacon vs 3 whole bellies, a 5lb brisket flat vs a case of briskets, etc.

eta: so on the small scale end of things it very well might not always make a difference.
Click to expand...

This is actually where for me the 270 gyuto has an advantage. It has more weight in the front so there's more weight helping out on the cut, and the extra height makes it stiffer even if the knife isn't as thick.

It really has nothing to do with the height of the blade, it's all about the grind. Sujis are more convex, so less surface area of the blade is in contact with the meat. If you had a taller knife with the same convexity, it would have just as little drag. Of course it would also be thick as heck. But yeah, it's not really about height

I bought sujis when I was doing hotel banquet work. I wouldn't want to slice thousands of pounds of steaks and roasts with a gyuto. I haven't used my sujis since I stopped doing work like that. There's not much point in having a dedicated slicer unless you need it but then you really need it.

Location
Barefoot and in the kitchen

I use a 270 Kochi V2 gyuto like a suji. It works better for me the my old Toyama suji. I like the pointy tip and higher (52mm) heel height. For raw meat trimming, I like my 210 Fujiyama petty.