I am in the market for a 270mm sujihiki to add to my collection. I will be primarily using it for slicing pates and terrines. I would imagine my best bet would be something as thin as possible.

Is the konosuke the thinnest you have? I am very partial towards white steel, all of my current knives are white steel, so I was leaning toward the konosuke white. What other knives do you carry that are similar and would fit my need? I also think that the suisin honyakis are absolutely beautiful knives, but may be a bit out of my price range (depening on my state of mind)

I've been using a KonHD 285 suji with a kiritsuke-looking tip. That thing is very thin (I wouldn't go any thinner.), has very nice geometry and we know the steel is great. It is an excellent dedicated slicer. Because it is so thin and narrow (not weird narrow, just normal suji narrow) it's pretty flexible so I prefer other knives for all-purpose work. I would imagine a 270 in white #2 would be similar but a little more suited to serving as an all around knife.

Konosuke. Really any type of steel, I'm pretty sure they all have the same geometry. Steel type is your preferance.

There's no reason for you to have two knives that similar, you should sell me one of them
T

tk59 - is that a custom job you did by yourself - or did you order it that way? and where can i find a pic?
T

I would assume Jon can get more of them in fairly short order. If you want better pics, let me know.

so... funny thing... i just noticed i totally forgot to answer this thread... sorry. Everyone else already had good answers

I agree with the posts... something thin in the 270ish range... gesshin ginga, konosuke, suisin, ashi... take your pick. A lot depends on your personal preferences with regard to steel.
A

Thanks for your input, I was wondering if you saw this thread, I started to feel bad when other people started replying instead since it's in your forum lol, I was lucky enough to find that 300mm konosuke in my favorite white steel locally. My god I really want to put one of those Suisin honyakis in my kit, though....

For those of you just tuning in;
I ended up with a second hand 300mm Gesshin konosuke sujihiki white #2 special edition. It is basically (correct me if I'm wrong) the 300mm konosuki white #2 suji with an ebony western style wa handle. It is the same handle as seen here:

This is my first sujihiki. It is in my kit with a yanagiba, usuba, gyuto, deba. I can raise a burr usually with two passes on a 5k rika stone, have not had to go to a lower grit with it yet. The first day I used it was also the first day of a new job i started. I cut beef, duck, onions, celery, and shallot with it.

It glided through the carrots with easy, no crunchy sounding wedges, onion and celery gave me no resistance either (rough cut for mirepoix).

I shaved down the PSMOs and created a perfect beef cylinder no problem, a job I usually do with my yanagiba (say what you want, my final product is sexy) although my yanagiba is usually a bit too short, no problem now, this knife gets that job in the future. I then portioned the tenderloins with the sujihiki. I sometimes even give my knife a pass on the stone before I do this as I firmly believe one resistless slice yields a much better final product than a saw cut with force. I did not pass the knife of a stone and the length of the knife as well as how thin it is made this job a breeze. Although I have become accustomed to single beveled knives, I did not have to worry about any blade steering while making the slice, ensuring all were made at decent right angles.
With the ducks, I still chopped carcass, removed legs, and breast with my usual deba; but instead of using my yanagiba to square up the breasts and put brunoise-sized scoring in the skin, I used the sujihiki. It worked well, but I still prefer my yanagiba for the job as it is shorter and seems to deal with greasy skin a tad better, not that the sujihiki doesn't perform well in this condition, the yanagiba is just a bit more efficient. I am fussy about making those breasts perfect rectangles with a porcupine-esque brunoised skin. This knife did that job well despite my yanagiba preference.

The last task of that day that I can remember was just a brunoised shallot. I say brunoised over minced because I am implying a minimal amount of knife strokes to complete the task and many thing of one rocking a knife over shallots to mince, something I would never do. I used the heel for the perpendicular slices, a task I usually do with the tip of a gyuto or mukimono knife, and the tip of course for the vertical slices, followed by the front midsection of the knife for the final chopping into the brunoise. The only set back I had was the vertical cut wasn't as smooth as I wanted it to be, BUT this was due to negligence with my initial sharpening. I have since resharpened and the tip is ****** dangerous now. It was this task as well as any delicate herb chiffonades that really made me understand how many Japanese chefs use this knife as their all around knife.

I couldn't be happier with this knife. It sharpens readily (which is great when sharpening such a long flexible blade). The fit and finish is a 9 out of 10, the geometry is perfect (I was a little nervous about that going into a 300mm) it does not feel awkward despite it's length. The blade, white #2 is reactive, but not nearly as reactive as my usuba, comparable to my masamoto white #2s. I got some blues right away from the beef and onions, rinsed and wiped not-so-carefully between each tasks and when I put the knife down and had no problems with some orange rust beginnings like I have to worry about with my usuba. It will probably be my most used knife in the near future, once I get a bit more accustomed to it.

Very glad you're enjoying the knife though
R

I think that picture was just posted to illustrate the handle on the knife he got.
A

Rottman said:
I think that picture was just posted to illustrate the handle on the knife he got.
Click to expand...


True, here is the knife, the top one obviously; 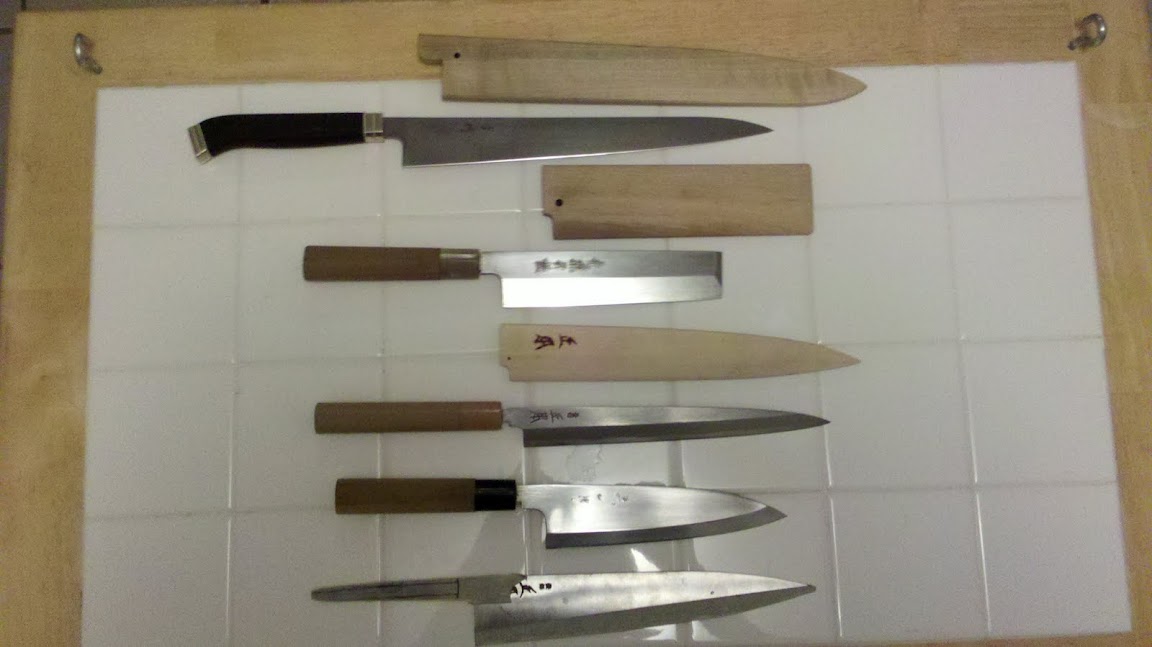 yup that's the one... great knife and sexy handle though. Glad you enjoy it and put it to work Steve .
A

Yep! even got a beer and some chill time with him out of it. Turns out he lives like 10 minutes from me.

lol I haven't met any chef that doesn't like beer .

I really recommend getting a new cutting board, those tiles look like they would be hard on your knives.[/QUOTE]

AnxiousCowboy said:
True, here is the knife, the top one obviously;

Hattorichop said:
I really recommend getting a new cutting board, those tiles look like they would be hard on your knives.
Click to expand...