An old and rusty Kikushige Yanagiba

I got this today, and has taken up a chunk of my afternoon... a fairly rusty, old Yanagiba by Kikushige.

Another member has helped translate some of the Kanji (here: A Kanji Question) and mentioned that because of how they were written the knife could possibly be pre 1945, which would be cool! Either way, a rusty old Yanagiba, after taking the handle off: 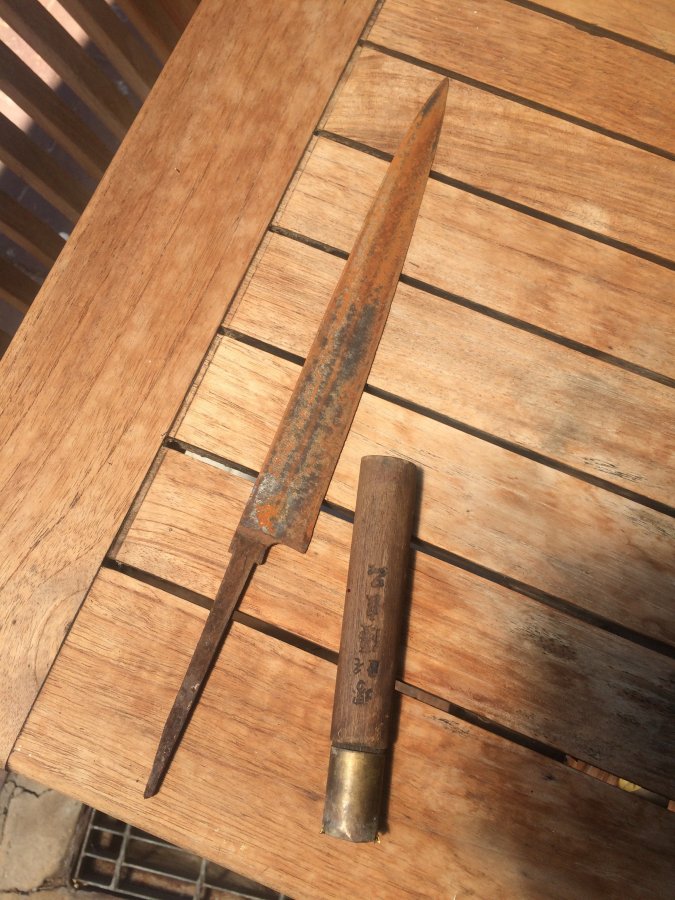 After some vinegar, baking soda, and scrubbing: 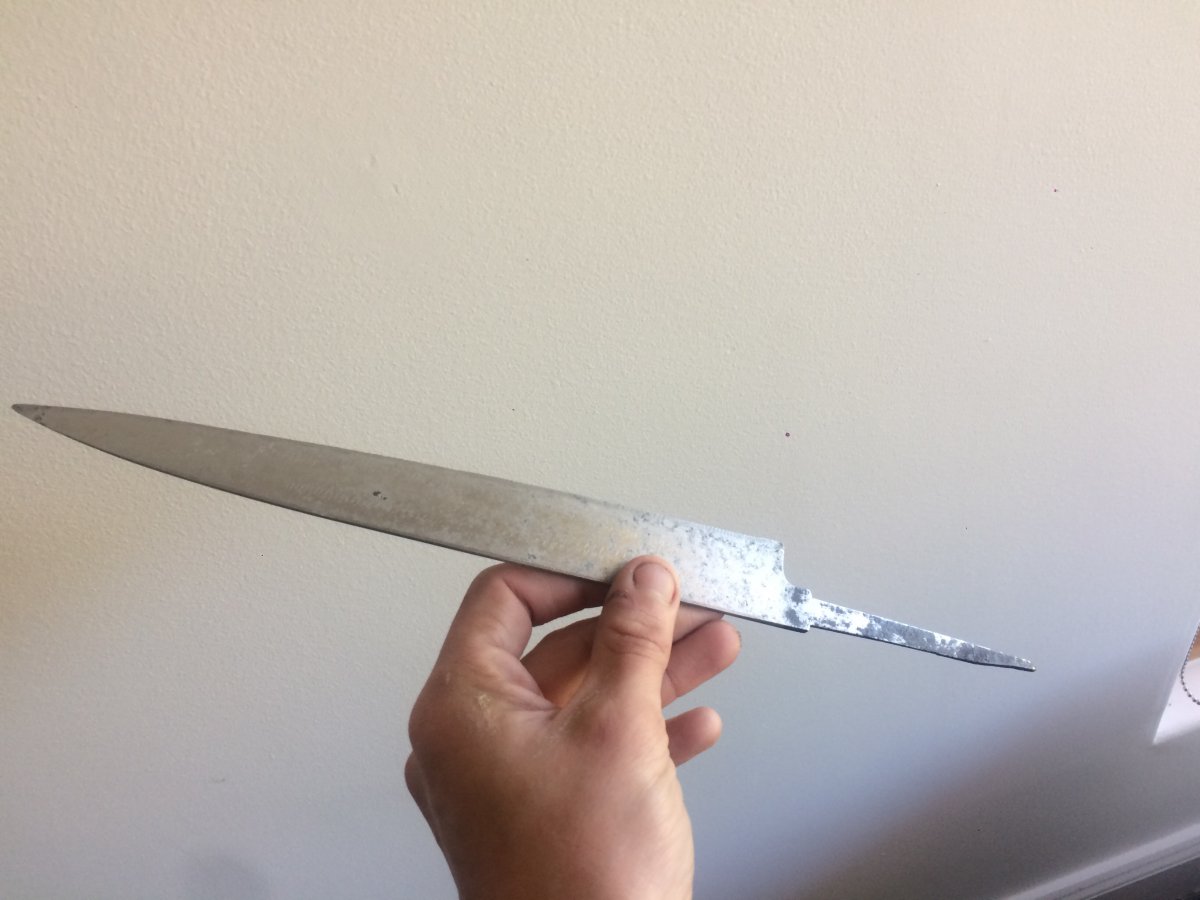 There's some pitting, particularly around the tang, but the blade is in ok shape (particularly if it's 75+ years old!). There were also a fair few rust spots along the edge which will need to be sharpened out, and some weird sharpening marks near the heel that almost give it a serrated look. Here it is after some sanding: 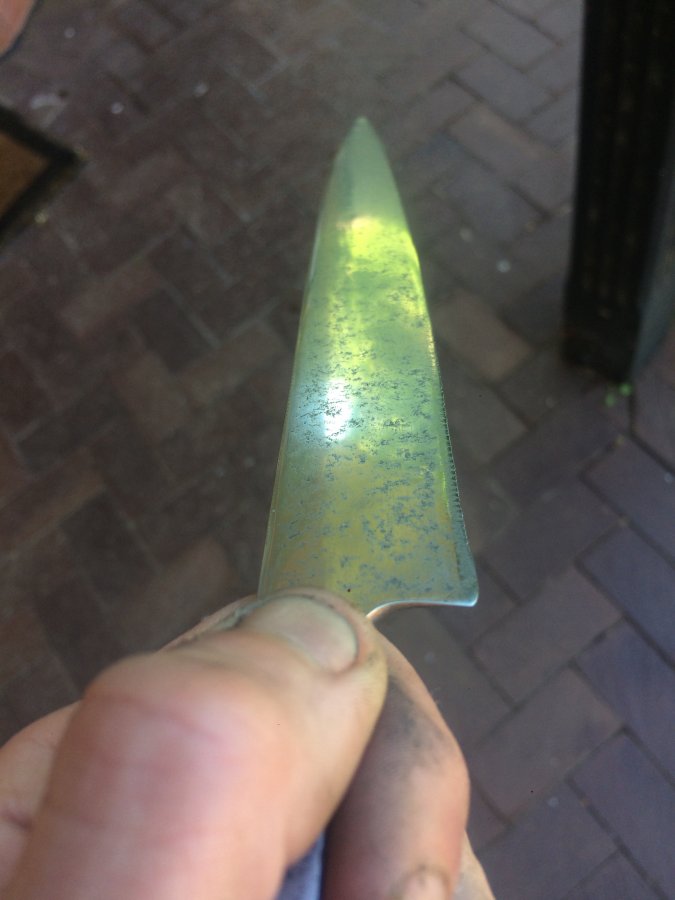 And onto making a handle, and my biggest win of the day... the invention of the VB-Tinnie-Epoxy-Mixing-Cup: 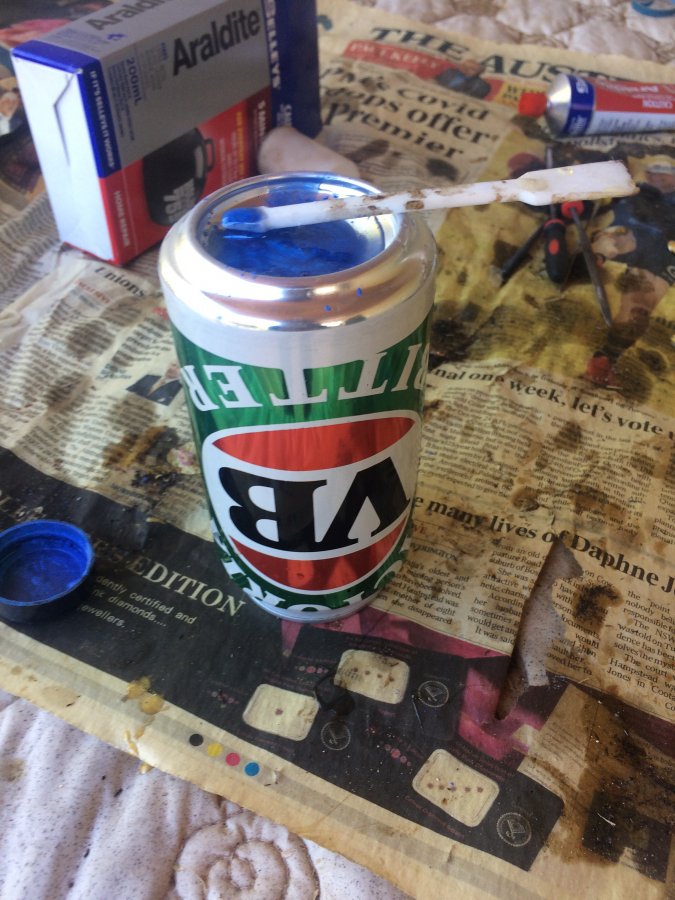 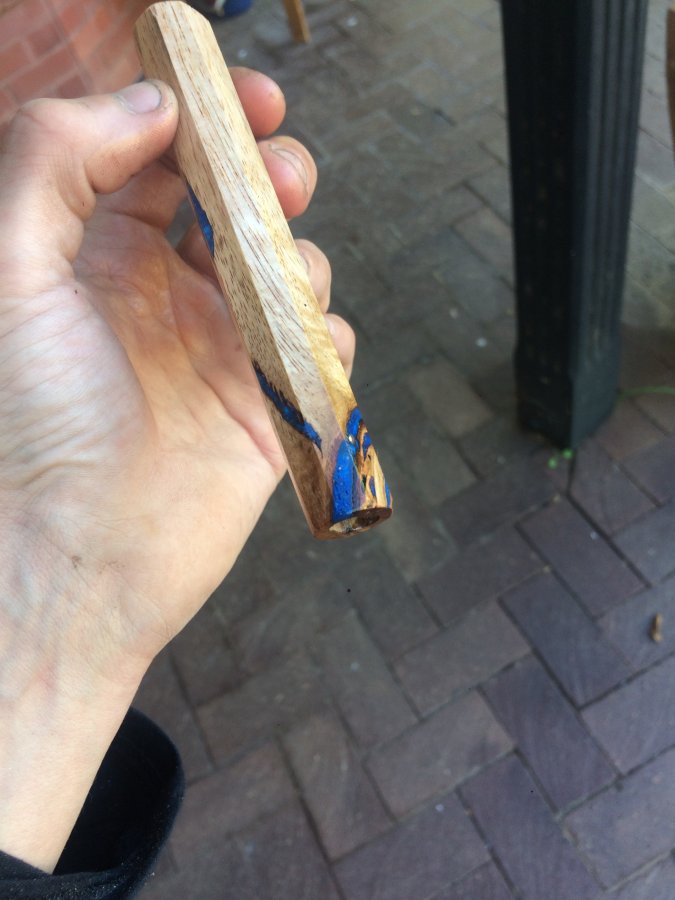 And here we are now... It needs to be sharpened, and the dings/pits gotten out of the edge (if anyone has any advice for this i'm all ears...) I'll probably sand it down another time too, and touch up the handle a bit: 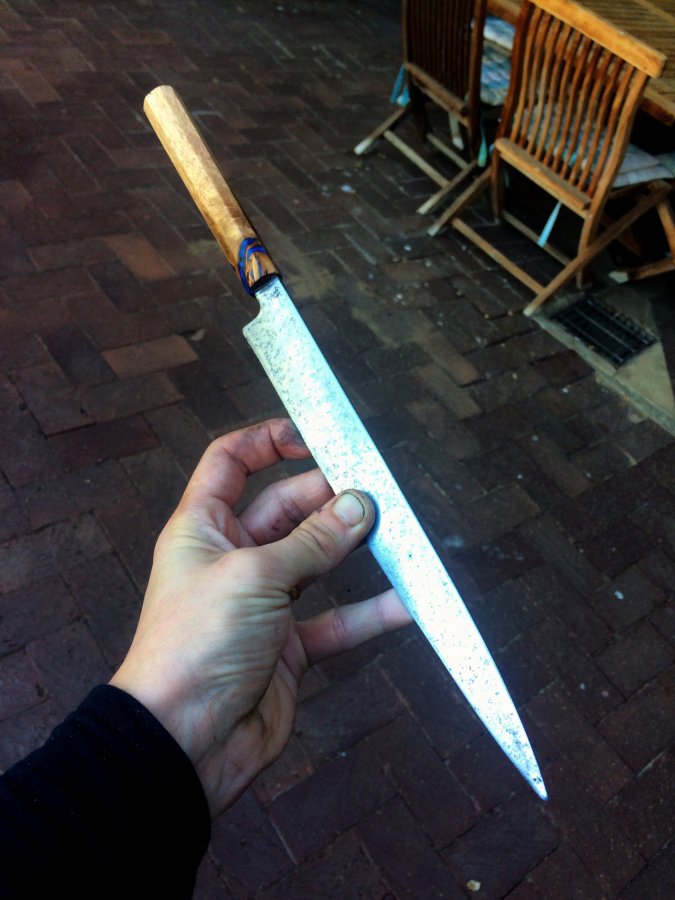 (I'll post some better pictures tomorrow too when it's done. These are all on the fly!)
K

I'm kinda wondering about the blade grind on old blades. Spine thickness, distal taper, thickness behind the edge? Is it similar or different from current blade preferences?

kbright said:
I'm kinda wondering about the blade grind on old blades. Spine thickness, distal taper, thickness behind the edge? Is it similar or different from current blade preferences?
Click to expand...

I'll try to get some pictures of this later, but to my untrained eye I would say pretty similar, tho maybe others might have a more expert opinion. The only thing being that the Shinogi is not particularly sharply defined, but I guess this has probably been smoothed out over time, you can see what I mean in the 3rd and last pictures above.

(It was only mentioned as a possibility that it might be that old, but I rather like the idea of having a very old J knife, so I'm going to stick with it until told otherwise )
Last edited: Oct 29, 2020

Here we go @kbright . My phone camera is rubbish, but seems to have done ok here. It gives the gist at least.

Taper goes from 3mm at heel, to 2.5mm in the middle to 1mm about 1cm away from the tip, down to nothing. Which I'd imagine fairly normal (?) 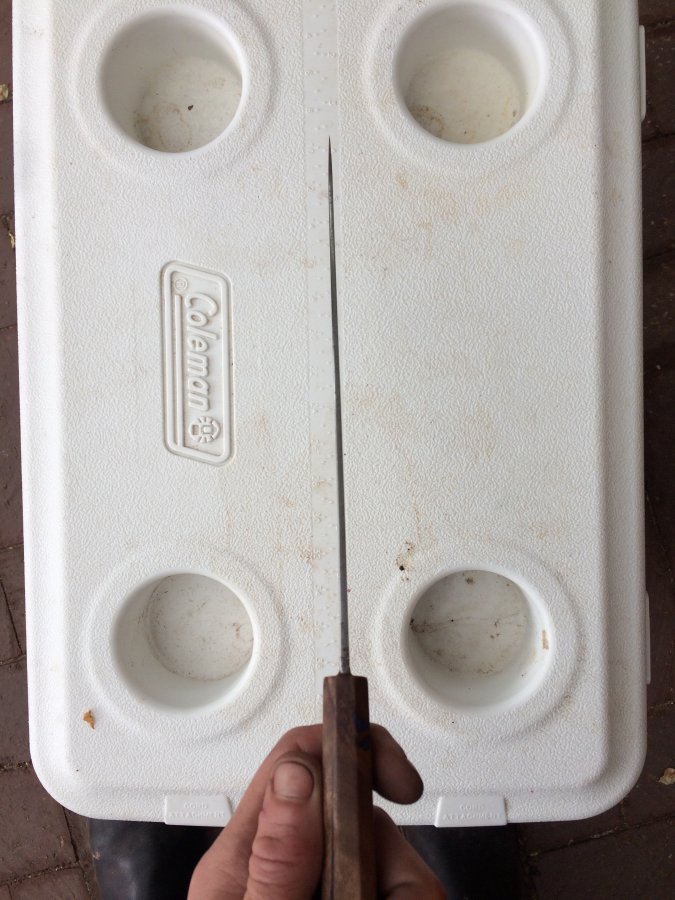 This choil shot is slightly deceiving, the bevel is a bit more defined for most of the knife than it is right at the heel atm. 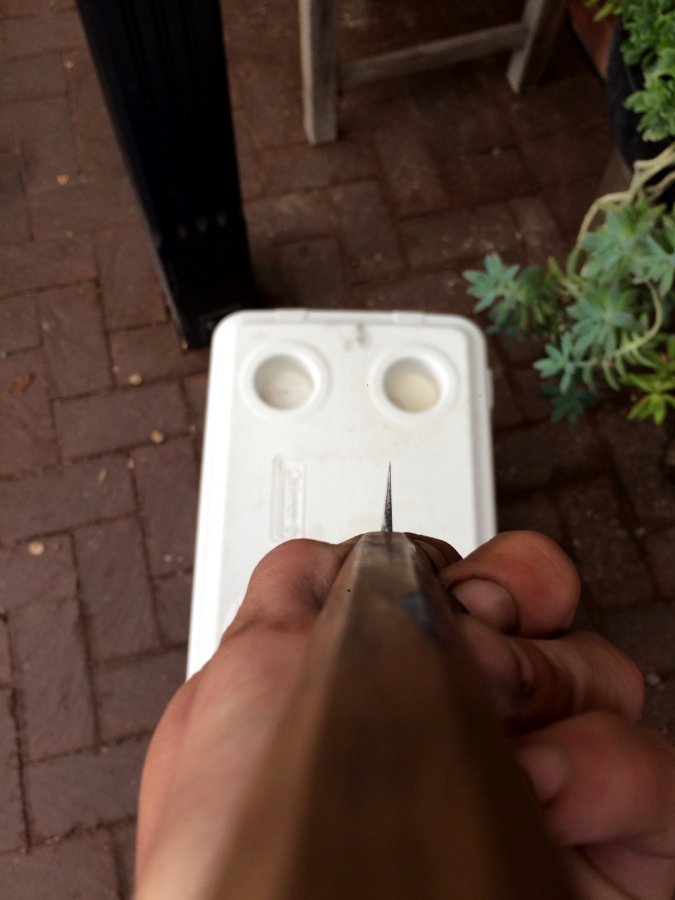 It's pretty thin behind the edge and the ura hasn't been over-worked, and has a nice even (fairly shallow) concavity to it.

[If I'm misusing any of the Japanese words in these posts - please do someone correct me!]
Last edited: Oct 29, 2020
K

Thin behind the edge 70 years ago. They knew what they were doing.

This is where I've got to so far today with stones. Restored the tip, and taken out all of the pitting from the edge (there still a tiny bit of one near the heel which will come out with time). This took a lot longer than I thought probably I imagine because the steel is a lot harder than the knives I've removed chips from before.

It's give the knife a kind of tripartite effect. On the left is shiny from the sanding yesterday, the shinogi (such as it is) has an almost kasumi-like finish to it from the stones, and then the very edge back to shiny. I assume that's normal, and something to do with the layers in the steel...?

Anyway it's really quite sharp now, hence the band-aid, so I'm going to do another sanding run (wearing gloves!) and then a final sharpening, and then re-sand the handle which has gotten rather dirty from all the mud! 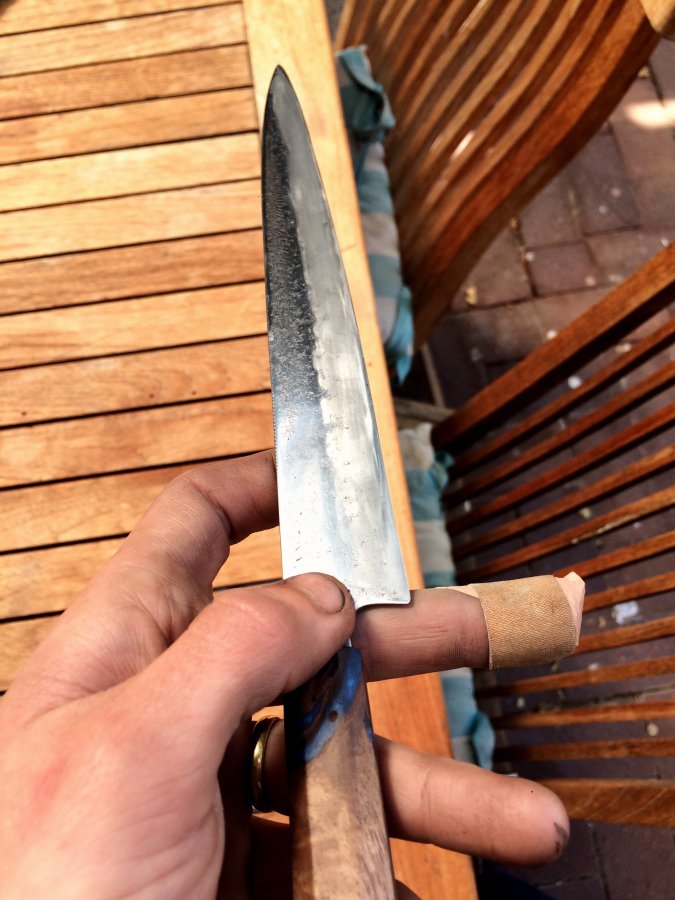 And I think I'm about done for the time being. This is after a final sanding run, sharpening, and restoring the handle to somewhere near what it looked like this time yesterday. One might say it still looks a little grubby, I however say it has 'a patina that echoes and recalls that of the blade itself'.

On the basis that I'm still a complete newcomer to single-bevel sharpening, I didn't do anything more to it than to get it usable and vaguely nice-looking. Having said that I've learnt an awful lot about the geometry of a Yanagiba, thanks mostly to a number of forum members and their generous sharing of knowledge and advice. As well as to keep paying attention during the slightly boring task of trying to sharpen out rust pitting, and not to install pretty light oak handles beforehand.

The shinogi is still not massively well defined, tho in the picture in the previous post you can see it is there. And there's still some pitting on both sides of the knife, even if not now on the edge, but as another member pointed out - it would take a madman to try get rid of it all by hand, so I will leave that task until I lose the last remnants of my sanity.

Looks like a slightly less rusty old Japanese knife, cuts like a Yanagiba through your middle finger... 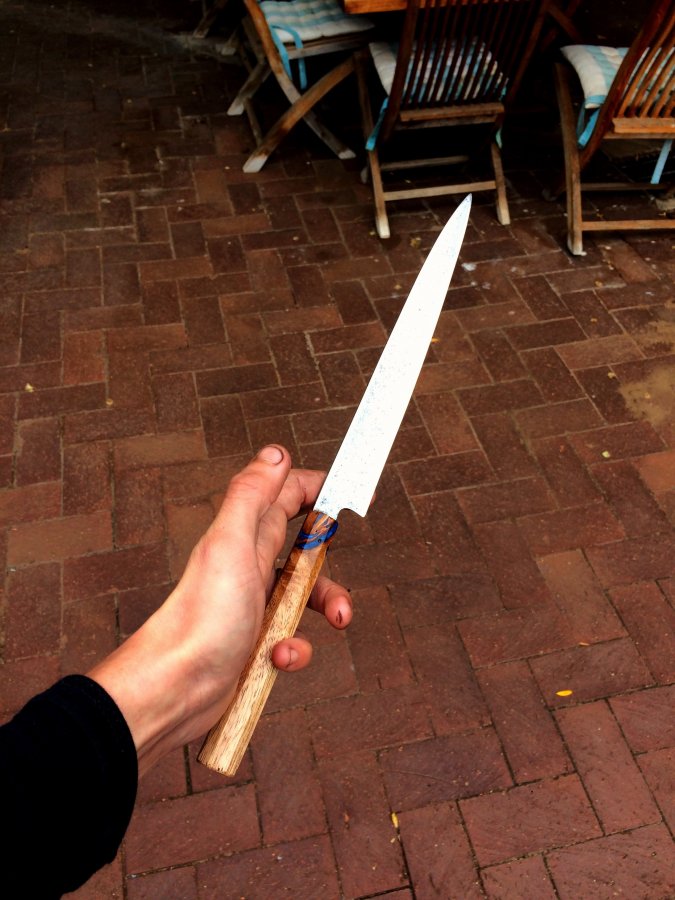 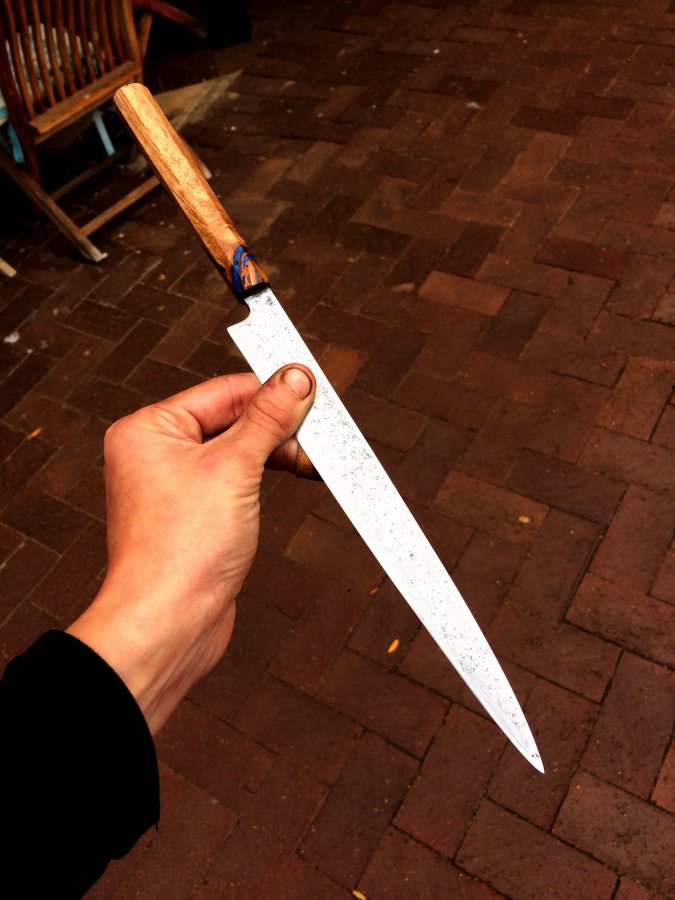 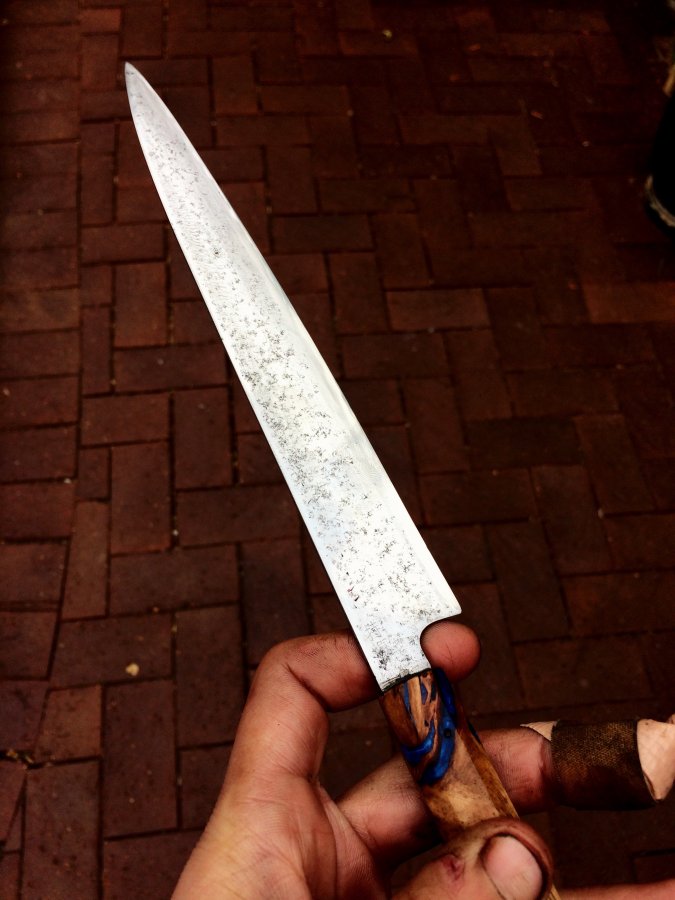 cotedupy said:
This is where I've got to so far today with stones.
Click to expand...


cotedupy said:
And I think I'm about done for the time being.
Click to expand...

Not on the slates today no, there was a bit of material to remove and I didn't think they'd work so well. Tho I may try them later or tomorrow and see what they're like for finishing/polishing...

And one last final arty picture, which gives an idea about what the remaining pitting looks like (tho the most major-looking bit there is actually a ding on my phone's camera lens - if you look carefully you can see it on all of my pictures.) 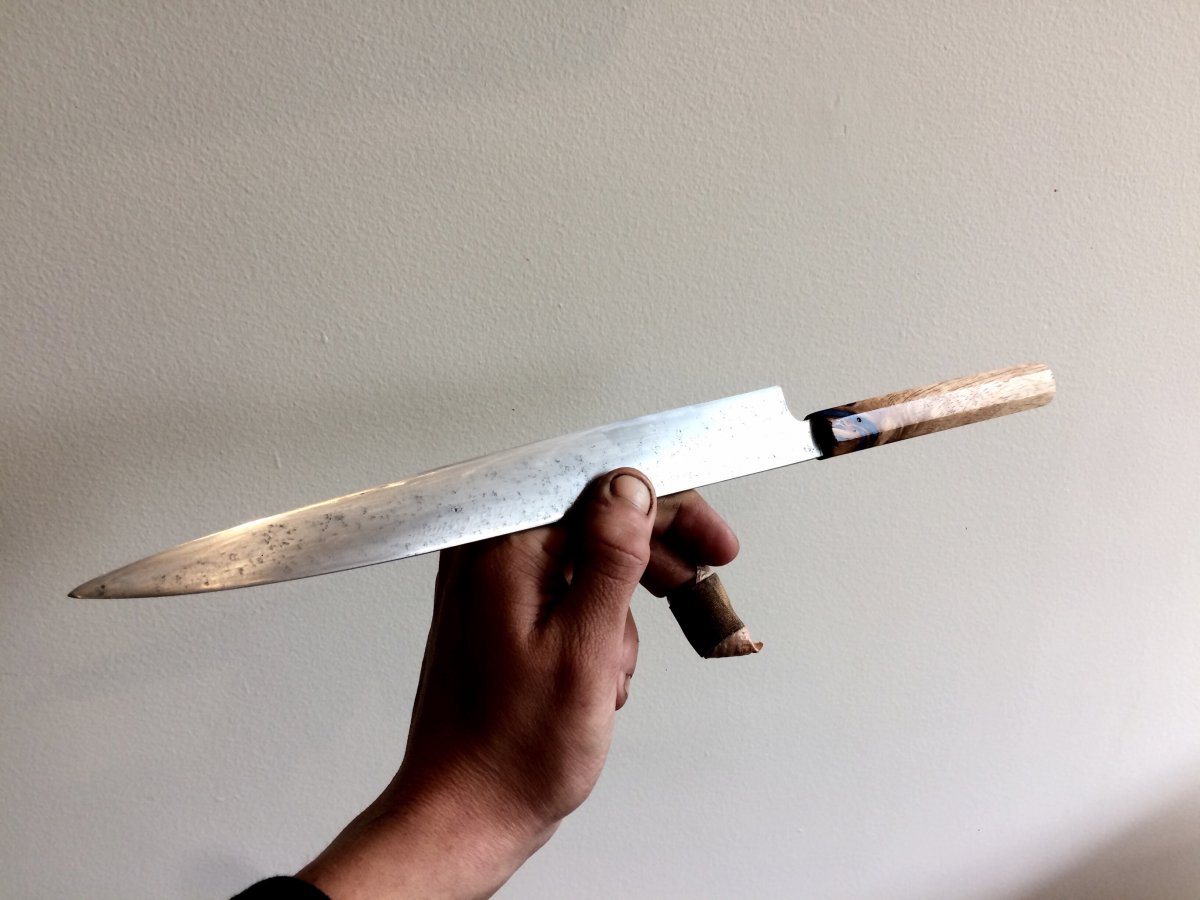 So this is a "historic" knife. Come up with a good story about the pitting, maybe it comes from the blood sacrifices that you and others have contributed to sharpening on stones for 75 years. Maybe each tiny pit represents a meal prepared with this knife.

kbright said:
So this is a "historic" knife. Come up with a good story about the pitting, maybe it comes from the blood sacrifices that you and others have contributed to sharpening on stones for 75 years. Maybe each tiny pit represents a meal prepared with this knife.
Click to expand...

Ha! Good idea. I've always been a fan of a bit of creative embellishment!

Thank you for the entertaining post and all the photos.

cotedupy said:
and then re-sand the handle which has gotten rather dirty from all the mud!
Click to expand...

I'm doing something quite similar right now with a what I'm gonna call a 100 year old German knife (It's got an award date of 1900 & 1904 stamped on the blaed so it was made sometime after 1904). I'm glad I decided to do the majority of the blade polishing, thinning and edging before I re-handled it. I anticipated mucking up the new handle if I installed that first.

I'd love to see a close-up of just a portion of the blade, maybe even a before and after. Mine's got only a couple of moderated pitted areas but a lot of deep, coarse scratch marks all over the blade from what I can only assume were drunken sharpening attempts. My blade is an amazing 3 inches wide at the heel (!) and there are scratches all over the blade including up to the spine at the heel. And those scratches mostly resisted 120 grit sandpaper that I started with when re-polishing the blade.
And I don't care about the remaining pitting and those scratches. The blade will be thinned where needed, the wavy parts of the edge will be fixed and then the whole thing will be straight and sharp. Then I'll re-polish the blade and add a new handle. The scratches and pits on the blade will not affect it's cutting ability but they will attest to it's age and previous life.

Ha! Wise move with leaving the handle to the end. I managed to rescue mine, but was a bit of a pain tbh.

I'll post you some pictures in a bit. I imagine my pitting might be a bit more extensive than yours, but doesn't have any scratches. And again like you, I don't mind it at all (tbh I rather like it), I've got a couple of old Sabs too that I purposefully haven't polished up too much, to leave a bit of that look.

That stuff just adds character IMO, and to remove all that might be considered a travesty.

Ericfg said:
That stuff just adds character IMO, and to remove all that might be considered a travesty.
Click to expand...

It's a bit difficult to capture the pitting on my camera phone. I've tried a couple of close ups below, to compare to the first few pics in this thread. This is what it looks like now: 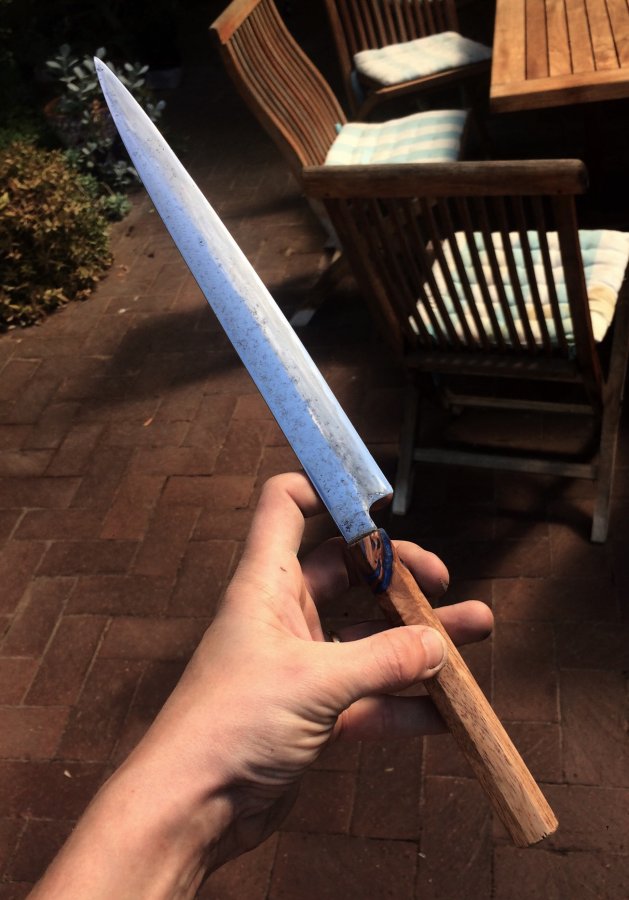 Most of the pitting is around the heel of the knife, here on the Shinogi side: 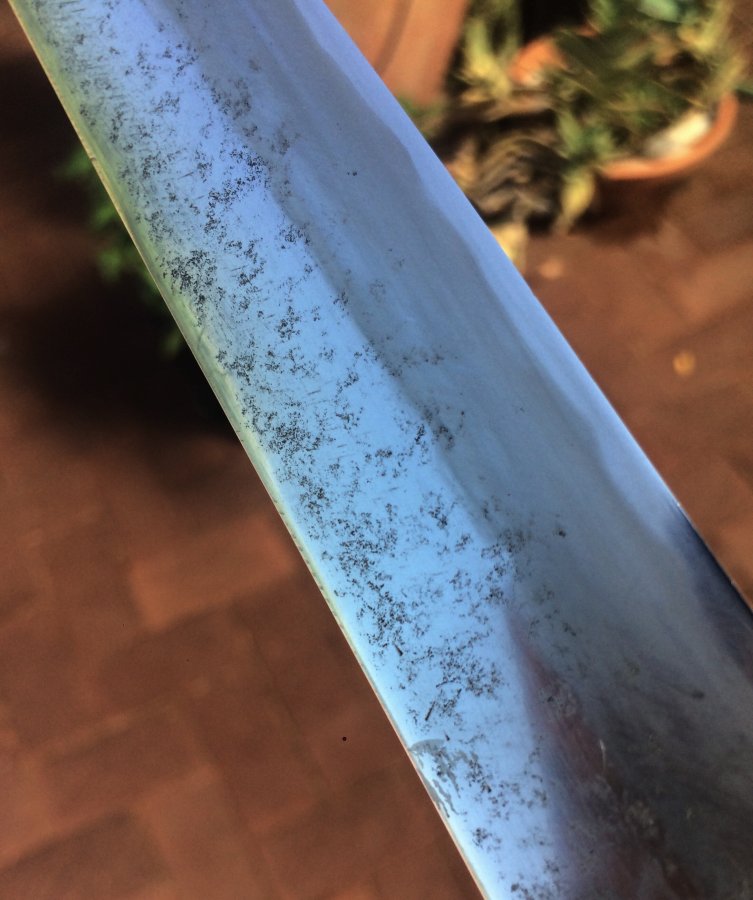 And here on the Uraoshi, you can see near the bottom that one of the pits still extends onto the edge. Also that the ura is actually quite flat, particularly on reverse of the hira. Don't know if this is part of the grind, or from years of sharpening (?): 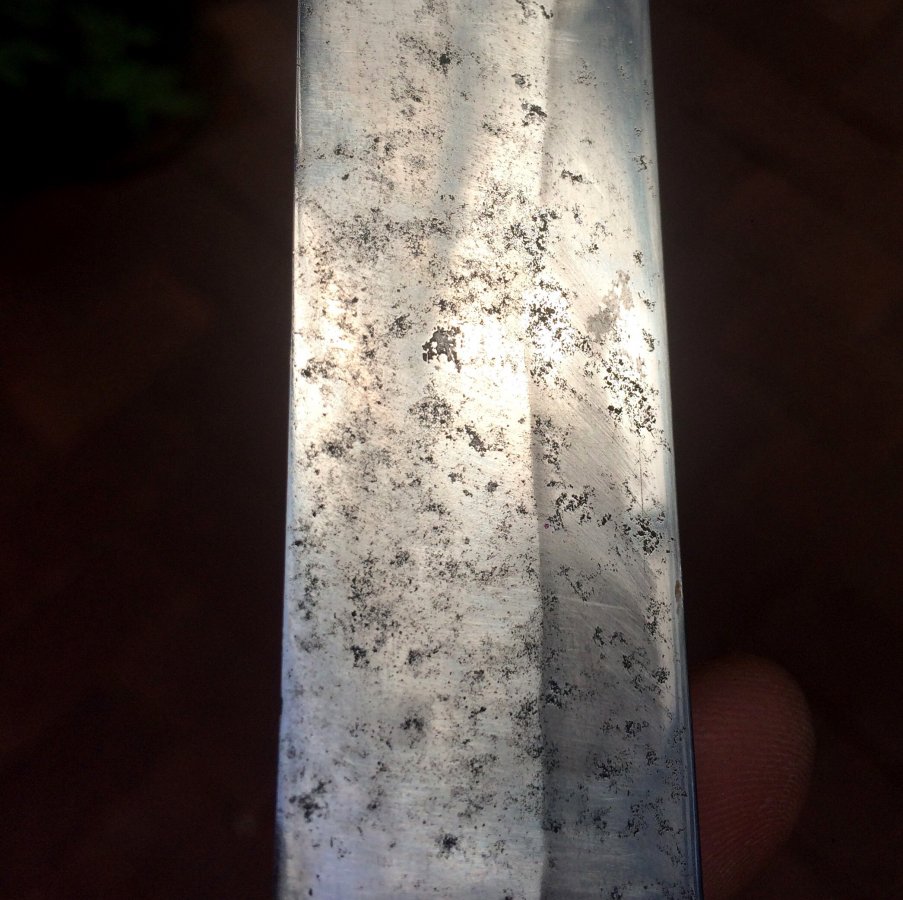