Being a Lefty can be a good thing!

A picture can be worth a thousand words... 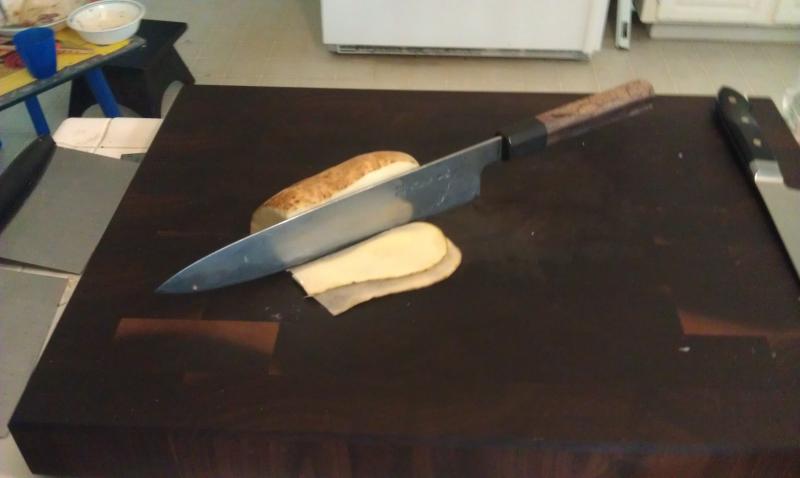 Haha. For anyone who is interested, that is a kasumi Mizuno gyuto sticking to the side of a potato after completing a slice. We cut a bunch of potatoes using several knives. The two standouts were on loan: this knife and the Gengetsu 240 carried by JKI. The funny thing was, Pesky kept raving about the Miz but I didn't feel it was nearly as amazing a cutter as he did. It had significant sticking issues, too, whereas I felt the Gengetsu definitely ranked among the finest cutters I've had the pleasure of using. Anyway, I tried cutting potatoes using every possible motion and all parts of the blade and felt it was equally uninspiring. Then, Pesky gave it another shot, made a few slices and then let go of the knife and this picture shows what happened next: nothing. Perfect release for a lefty and perfect sticktion on the right side. Pretty funny, no?

Nice photo with a good story,and you can use a Kanisaki deba as a regular single bevel:biggrin:

in the olden times they used to burn crazy left handed people alive, said they was touched by the devil. I'm just saying....look around.:O
L

"Left handed people belong in zoos" This cracked me up.
T

Haha, I'd join in on the lefty-bashing but the gentleman that loaned me the knives is a very large lefty and my wife is also a lefty, lol.