First off, I'd like to say that I do not work for Stanley. I also want to say that this isn't intended to be so much a *plug* for this product, or anywhere it can still be purchased, as it is a heads-up, since it is available cheap and no longer being made!

I pondered the best surface to put my sharpening stuff on, and carry it around, and spent weeks considering different options. Perhaps a small folding table. Perhaps a short ladder. Perhaps a dolly of some sort to carry it. A gurney? I dreamt of new designs.

Then along comes the Stanley FatMax Mobile Project Center. Very hard to find. Obscure, even. Hardware stores that officially stock Stanley products don't have the item number in their computers. It is no longer being made.

And it is the best sharpening station I've ever seen.

As far as features that it touts on its own website, they are all true. It is a sturdy, functional dolly(with a very LOUD forklift). It is solidly built, even though it is plastic, this is more like plastic people make ladders out of, not trash cans. It folds up to a fairly compact size, like a very large TV dinner tray from the 70s. It doesn't weigh a lot, though I wouldn't carry it across a mall without it's wheels.
The cranks that adjust the gap in the tabletop work well, and will adjust unevenly without a problem.

But here's the cool things about it, that Stanley doesn't know about specifically. It's 33 inches high, which is just about perfect for sharpening standing up. The outlet mounted on it works as advertised, which doesn't provide portable power, it just cleans up the workspace, so you don't have a long power cord laying around. It wraps around the outlet, so you don't trip. I use it for the following tasks, generally. I've used it for a lot more than this(no comments on my homemade gear, you hooligans)!: 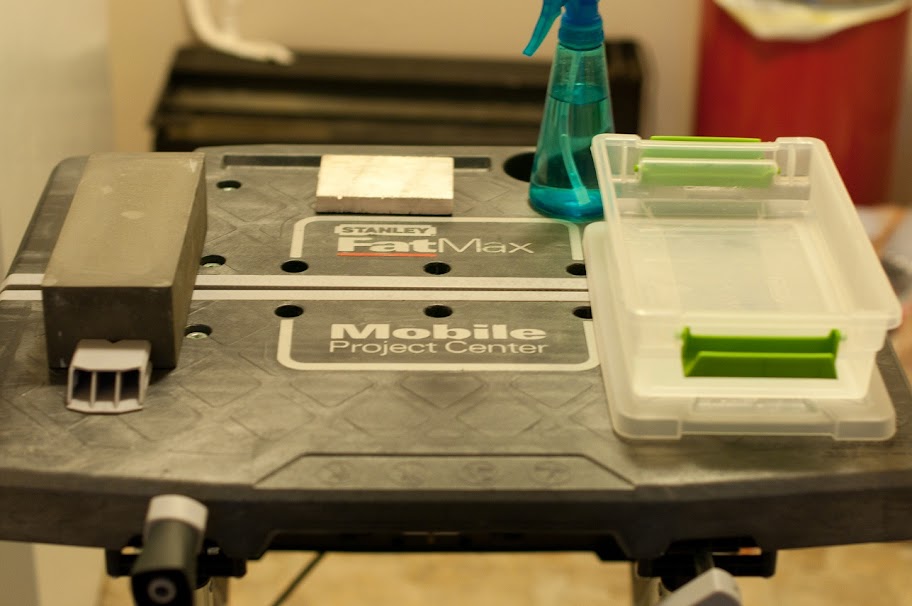 The nubs are close enough that you can open the table a bit and crank it closed carefully, and it will hold your stones, very firmly. I've stress-tested it by putting a beater on it and REALLY bearing down and hauling @$$ on the stone. No wobble. 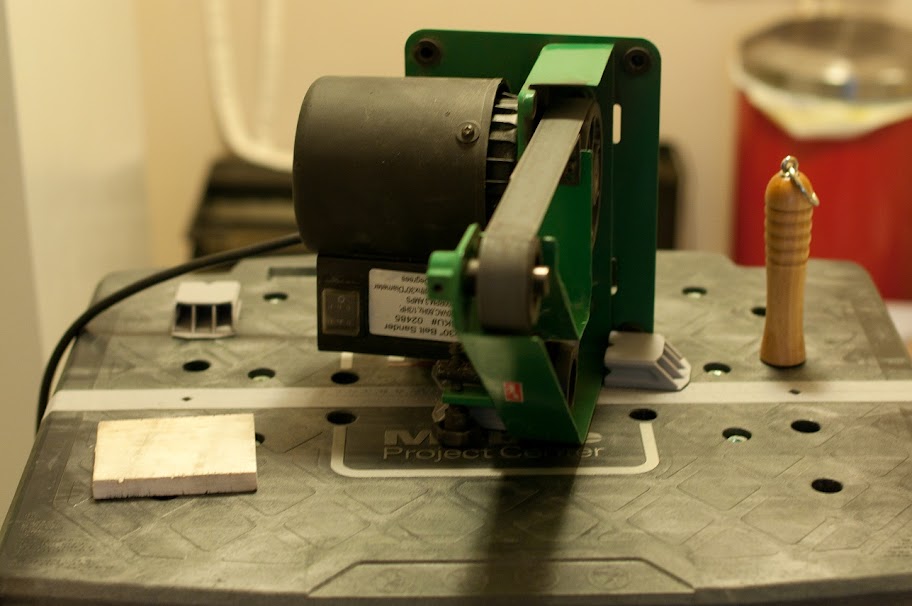 This is how to sharpen 95% of the world's knives without wasting time. The holes in the table will hold a ceramic rod, and the nubs can be moved. If your sander is wobbling around because you laid it on it's back(as you should), you can put the nubs close to it and twist, as seen here, and it sits still. 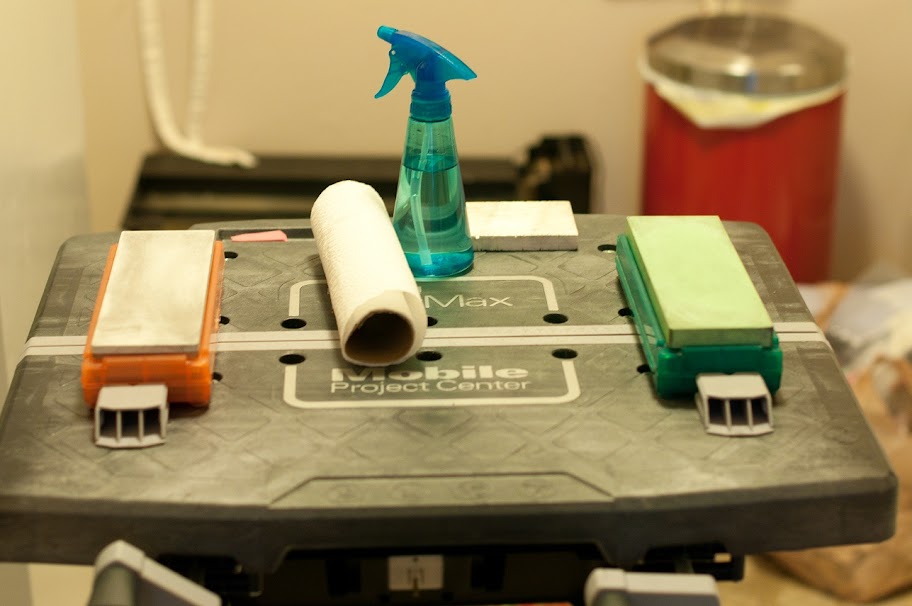 Again, the table can hold stones and stuff pretty well. I still use my Shapton Pro boxes, and they hold the stones above the nubs. Since there are two cranks, you can put a big stone/holder and another, or a strop, on at the same time. There is a little pencil rest that can hold stuff, like that eraser I am deburring on(Yes, an eraser. Got any more felt coming, Dave? :whistling. 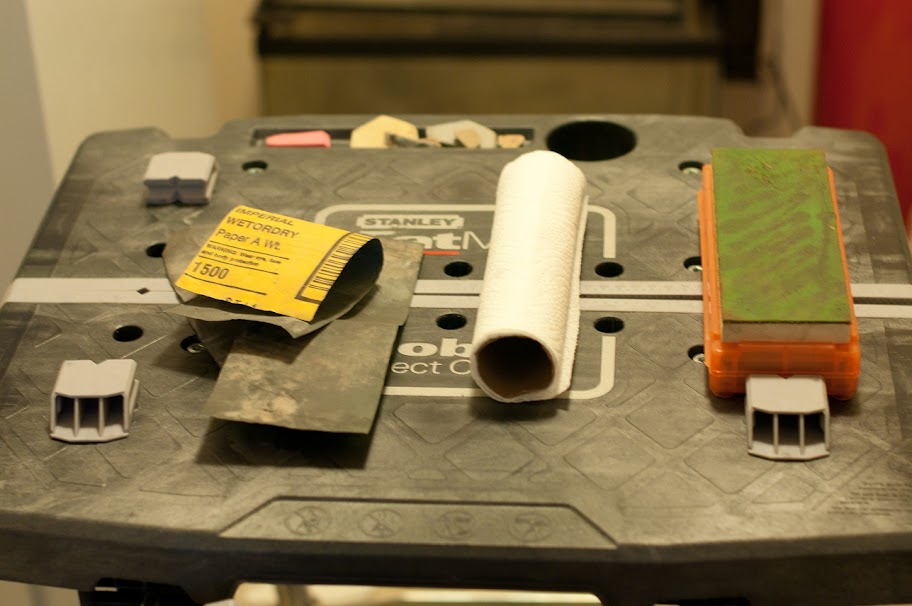 The little rest can hold stuff that otherwise will get lost(like fingerstones!) and the thing is big enough to put a strop on and still have room to polish on the rest of the table.

There is a guy on eBay who is still selling them, and has plenty, it appears. You can find it yourself!

I have been very happy with this thing, and hope other people can get the same benefit of knowing about it!

How is this different from a Blackened Pecker Workmate&#8482;?
OK, I looked, it has wheels and a workmate doesn't, but a workmate has the same mechanism for the top as this. It looks like a decent deal, butt over 60 bucks for shipping makes the workmate a better deal for me!

SpikeC said:
How is this different from a Blackened Pecker Workmate&#8482;?
OK, I looked, it has wheels and a workmate doesn't, but a workmate has the same mechanism for the top as this. It looks like a decent deal, butt over 60 bucks for shipping makes the workmate a better deal for me!
Click to expand...

Yeah, the wheels make carrying it around a lot easier, and it's a working dolly too, which is awesome! The workmates I've seen in stores(which maybe were not the best) were fairly flimsy and the workspace wasn't as big. But it is a comparable thing--both would probably do a similar job. I'm just really happy with this one so far, and it usually retailed for $130, and I got mine for $95 shipped.

*edit* forgot to add..this one is 3 inches taller. 36 inches is my favorite height, and 30 is just too short.