Did some test cuts with it, who ever sharpened it last, what edge is this/what progression was used? It's hot damn sharp and I love it.

Do to the stipulated rules he would no longer be eligible for this passaround, so in fairness to the non-Raquin owners in this passaround he has agreed to opt out.

We also had another person opt out as well, so I have updated the list below. I do not plan on getting subs. I will eat the cost and still continue to pay for the knife "refresh" at the end of this passaround before it goes to a lucky winner.

Hope you are all enjoying it.

I do get nervous every time I see this, with him last on the list

SolidSnake03 said:
Did some test cuts with it, who ever sharpened it last, what edge is this/what progression was used? It's hot damn sharp and I love it.
Click to expand...

Been sorting out what I think about the knife because I really like it, but more for how useful it is over how it excels at any particular thing. The length and heel height are perfect with the KT grind to me for both general prep and butchery. I'd choose something else for either in a professional environment, but at home it covers all of my needs. Thin enough behind the edge to enjoy cutting veggies and durable enough to take apart a few chickens or salmon. I enjoyed the tip profile in particular for this.

The only trade-off is that it does hesitate (not wedge) on taller items as others have said. I didn't notice much difference with density. It's not enough to care about compared to what you're gaining in return. I'd probably prefer his regular grind on anything larger. This is a sweet spot, I think.

For a home or travel knife this is basically all you should want. I've spoken on my preference for all-rounders before and in these environments this fits the bill well. Still, if I had my choice of Raquin it would be a shorter Meat Killer. This would be my second.

Thanks for the write up! Ah figured it may be some naturals. Has a very nice feel to the edge and the way it cuts into food immediately is reminiscent of that. Thanks!

Wanted to give an update with a review of sorts and let everyone know that I'll be shipping it out tomorrow with USPS insured and tracked for the $700.00 to the next user in line LostHighway.

Review/Thoughts:
The knife is real, it is visceral and has a feeling of strength and confidence to it. I used the knife to prep a few weeks worth of meals as well as a variety of daily chores and it never once let me down. This is a knife that rewards you for using a little more force, a little more oomph and seemed to prefer a bit of a rock to the cutting motion (like a good French Sab does). To avoid repeating what some others have said, yes it's a bit thick...more than a bit thick but in that it has excellent separation and food release. I did get some slight wedging and halting in some foods but that went 99.9% away by using a bit of a rock/glide and using a little more confidence when cutting. I found that if I treated it lightly and used a really delicate touch I had more problems than if I gave it a little more moxie, then it really shone. The knife grew on me, it really did, it felt like something I've held in my hand for years and done 1000's and 1000's of covers with. The balance, height, length, everything felt perfect and natural. The wa handle had the most grip I've ever experienced and I want this type of handle for all my wa knives now. The feeling actually was a lot like Heiji, a direct from the maker Heiji is a little thicker than it needs to be (like this knife) but performs well, takes a wicked edge, feels natural in the hand and prefers a little more force/confidence in use. The knife could be thinned a bit and the shoulders eased but it would loose a hint of that magic then. Same with Heiji to me, the slight idiosyncratic aspects like this make it feel more real. Is it the best cutter I've ever used? No, it's top tier for sure, but the best? Nope. Does it have the best food release and separation? Nope, not that either but it's real close. Is it the best finished? Nope, not that, a little more artistic and rustic than high art. Do I care that it isn't first in any one thing? Absolutely not, I miss it already and I'd rather have it than my best cutter, my best food release or my nicest finish.

Overall....how did I feel and how do I like it in not so many words? I feel like I'm losing a friend sending it away, it was never mine but damn I'll miss it and you know I'll be counting my stars hoping to win it.

Thanks for the experience, it's been great, really really great.

Just a quick update, this is in the mail with USPS insured for $700.00 to LostHighway who is next in line. Should arrive with him on Saturday. Thanks all, was an amazing experience and keeping my fingers crossed hard for this one
L

Raquin arrived in Minnesota early this evening. Kudos to my predecessors on the list as the knife is in fine shape and looks well cared for in marked contrast to the torture some other passarounds have suffered.
Initial observations: It isn't quite as much of a beast as I anticipated. At 181.4g it definitely has some heft for a 210 but not enough to feel unwieldy so far. Balance is at the pinch. The handle feels oversize, but given the weight of the blade that, or going to a denser wood, is probably required to maintain the balance point.

Glad you got it! Yup I found the same with the handle, definitely sized for balance otherwise with a more normal size wa handle you would be very blade heavy
L

First, my thanks to @Jaszer13 for putting together this passaround. Also, credit to the prior users as the knife arrived looking very carefully cared for, in marked contrasts to some other passarounds. My comments will be brief both because I'm pressed for time and because the knife has already been ably reviewed and there isn't much else to add.
Appearance-wise I loved the knife. Bryan Raquin's command of his craft is obvious and I can understand why his knives are sought after. I've never even seen a photo of Bryan but post using the knife I'm picturing a big guy. I'm far from tall, about 166cm, and the knife felt built for a larger person. The handle is markedly oversize for 210 gyuto, both in length and girth. It looks like it belongs on a 270 WH. I am guessing that it is this oversize because it was necessary not to make the knife super nose heavy (it balances at the pinch) given the choice of handle material. While I like the chosen wood, personally I probably would have gone for a denser species or put a tungsten slug in the handle to keep the balance but reduce the handle to a more conventional size. That said, the wood of the handle (oak?) felt really nice.
The edge profile also suggests to me that it is intended for a taller user. It functioned quite well for tip work although the high nose forced my elbow up a bit too far. For long push cuts the last few cm of the edge felt a little too flat/abrupt with more board contact "thunk" or drag than I'm used to although I have experienced that with other knives, my Isasmedjan has this quality but to a lesser extent, and I've used a few that were worse in this regard than the Raquin. @pleue didn't find this to be true so maybe it is just me or again a matter of stature/geometry. Chopping and draw cuts were issue free.
The wedging in taller, firmer produce was not as bad as I had feared it might be but there was a definite increase in required effort. Again less than I've experienced in a few knives but a bit more than in the knives I've kept. Food release was very good but not absolutely exceptional. I would place the release toward the bottom of the top quartile among gyutos of my experience.
The knife reached me perhaps not totally fresh off the stones razor sharp but certainly with a good working edge. I used it exclusively on my Hi-Soft board which I consider the most edge friendly of my boards, but never-the-less there was some obvious loss of sharpness after about four vegetarian meals (peppers, cauliflower, onions, garlic, potatoes, tomatoes, ginger, a few herbs...) - this kind of surprised me but there are too many uncontrolled variable to draw any firm conclusions.
Overall my reaction is nice knife but probably not for me. I might have slightly preferred the standard, not KT, version - hard to say not having tried one. Personally, I would not trade my HSC/// or Kippingtons for this knife (only one of the Kippingtons is close to the same size) but those knives were made for me and the product of protracted discussion as to my preferences.
M

Just got a chance to use this to make a quick squash soup. Knife didn't wedge at all in the smaller honeynut squash, but wedged slightly in the bell bottom of the butternut. 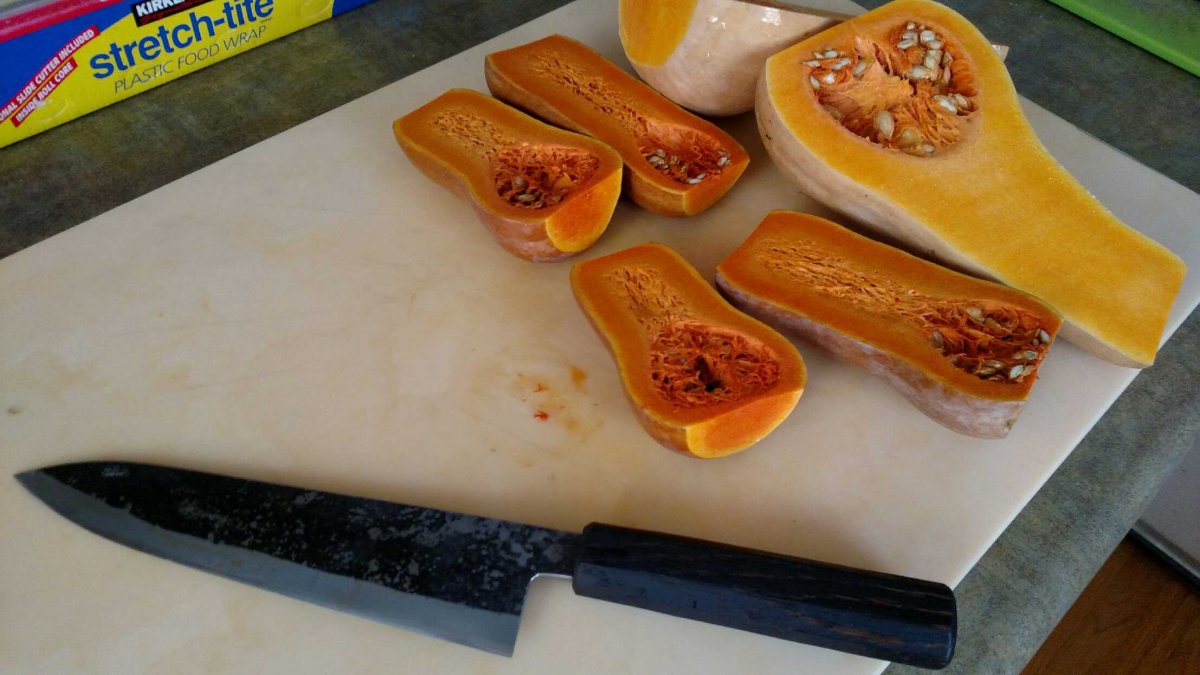 Then I cut up an onion, shallot, clove of garlic, and a bell pepper. I really liked the performance of the knife. Came with a nice edge and sweet polish job courtesy of @ryandunk . No resistance on the skin of the bell pepper and the tip glided through the onion and shallot. 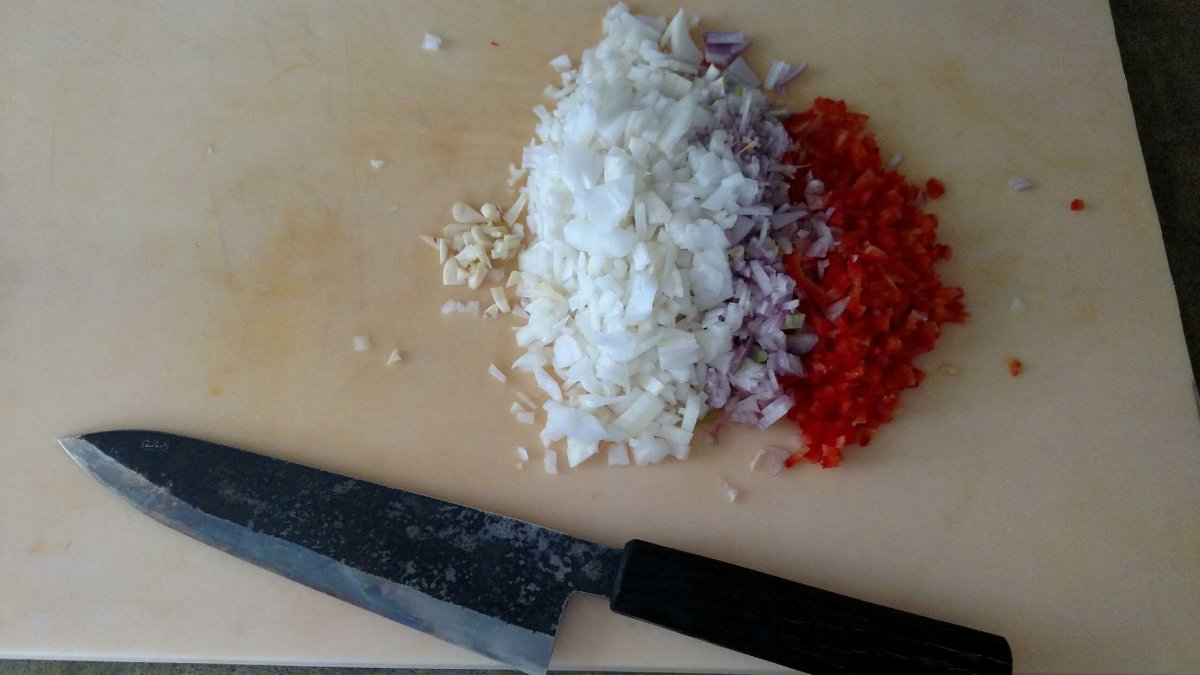 After cutting that much veg here is the patina: 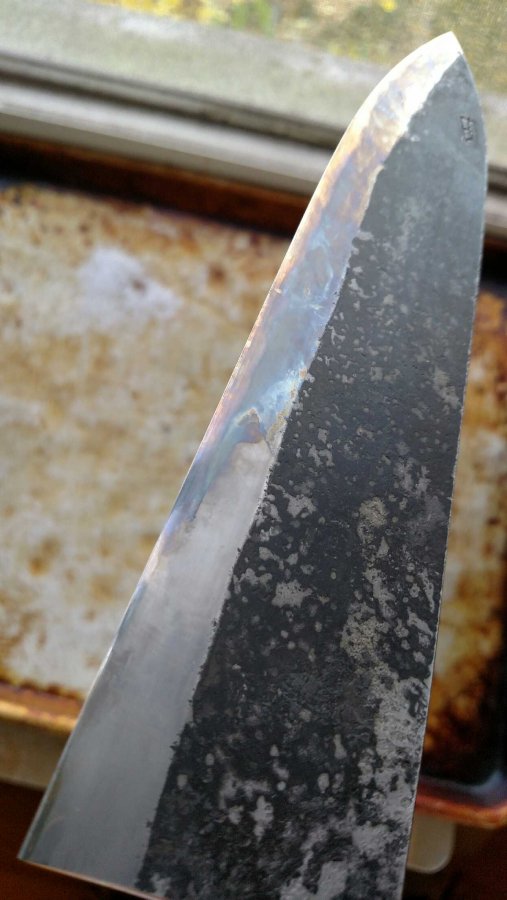 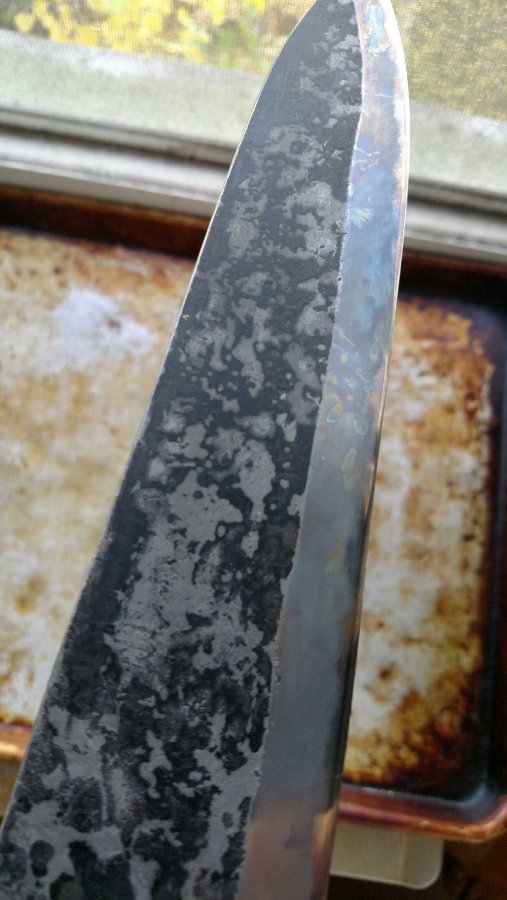 Only downside so far is there was a little bit of rust formation after very minimal prep: 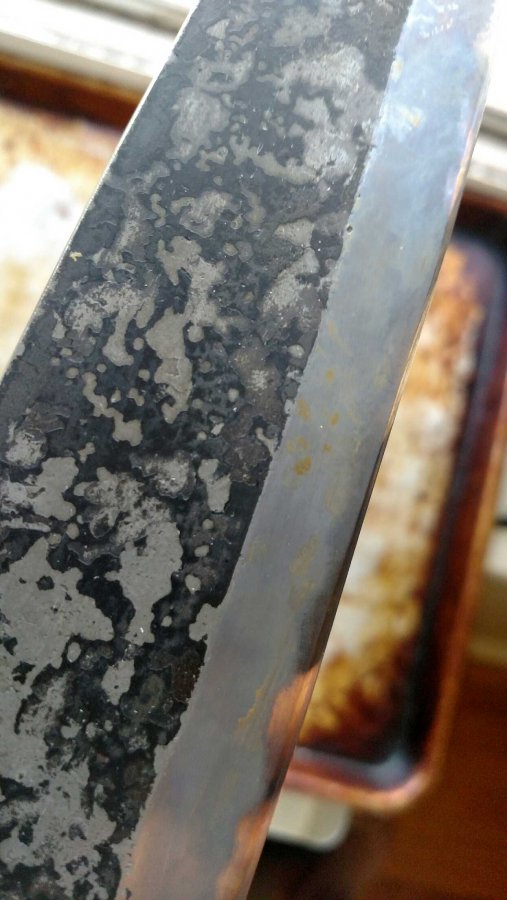 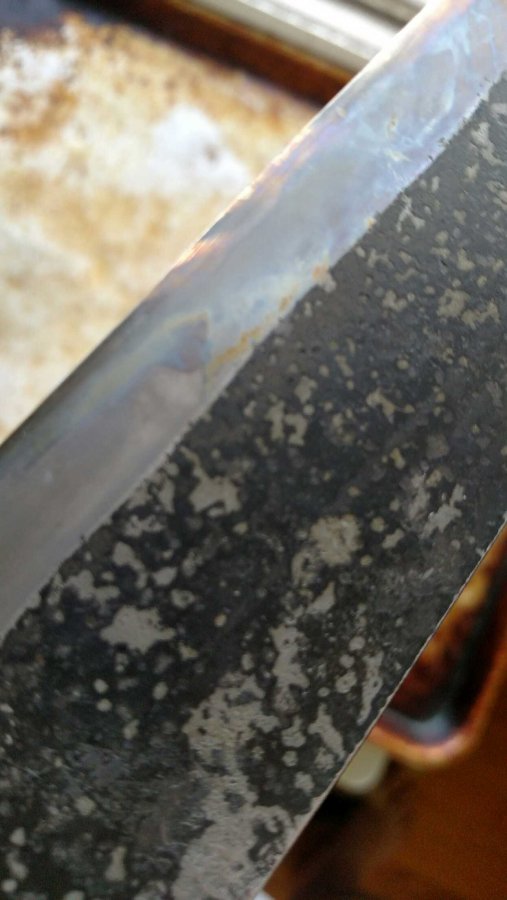 I removed the rust with a cork and some baking soda slurry.

I'll do a more in depth write-up later but so far the knife is pretty great.

Knife just arrived. Took a full week in the mail via USPS. Opened the package just to inspect it. Initial impression: small but hefty. Love the large, textured handle. Love the weight, not a fan of the height. Haven't used it yet just wanted to update.

Barely had a chance to use it but I made a point to go through some mirepoix and potatoes. I only cut 2 onions, but unlike others, I thought it was a struggle. The knife didn't have as much distal taper as I expected, but I assume that's a property of the kt grind.

Other than the onion, everything else was blissful. Wonderful food release without wedging. The height initially looked and felt a bit short, but I didn't notice during use.

It never touched the stones. Stropped on bare veg tan leather. I did notice a rolled edge near the heel but it was above the pinch point so I didn't bother doing anything. Didn't feel it on the strop, just saw light reflecting off the edge.