I bought this huge and beautiful Natsuya recently from @Froztitanz , a member here who knows much more about JNATs than me. I don't enjoy sharpening on it, I don't like the feel, it feels hard and sandy at the same time if that makes sense. It must be a personal thing because the seller assured me this is a perfectly fine example of a Natsuya. This is a medium-grit stone, supposedly in the 1000-2000 range. The stone is quite hard but auto-slurries without problems.
Size: 77 mm x 210 mm, height 60 mm. Weight about 2340 grams. This will last several lifetimes!
There is a hairline crack visible but it only goes a few mm deep, so no problem for the integrity of the stone. It can't be felt while sharpening.
I'm letting this go for the price I paid, € 350 including PP fees and shipment in EU. For other countries please ask me. 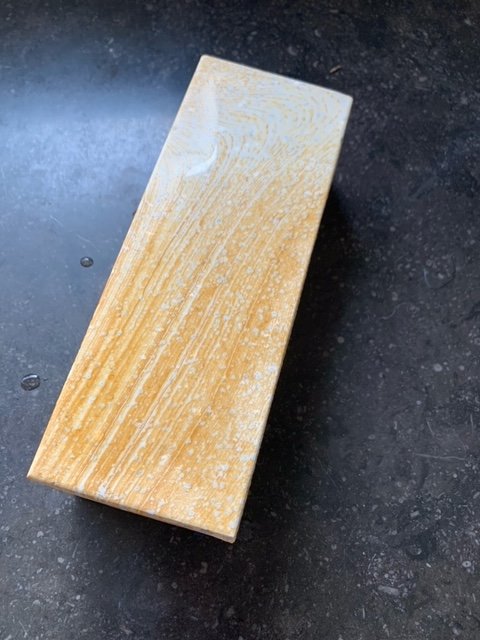 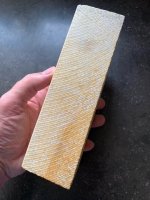 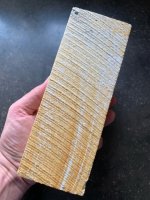 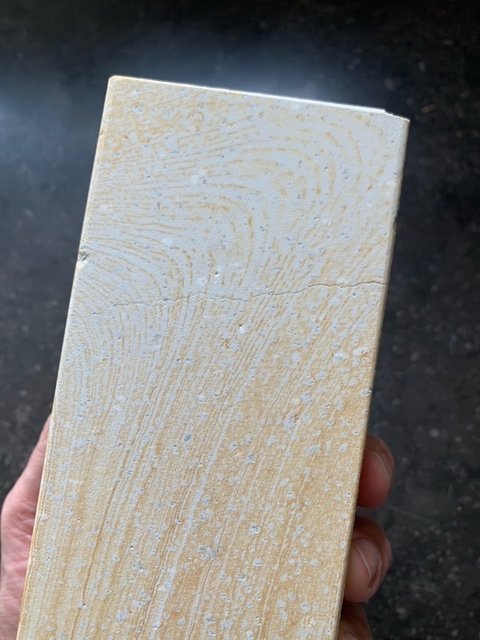 For polishing I think this stone makes sense. It is traditionally the first stone in a JNAT lineup for polishing. It produces an even scratch pattern. 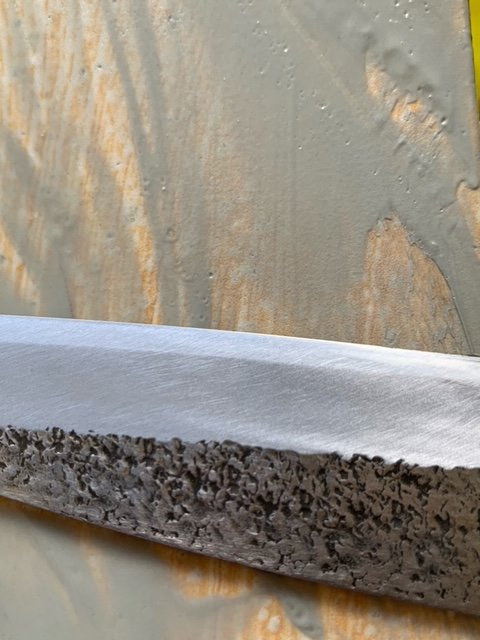 It also is easy to surface crack . . . feeling wise, if you've tried amakusa, natasuya feels like a super consistent amakusa, but 1K. The sandinness/rubberiness in my example helped to make shallow scratches, and the rolling grit helps with making a dark kasumi. Mostly though, I sold it because I liked ikarashi more when I wanted a consistent finish, and it was fast enough to take out synthetic scratches. However, it's one of the fewer lower grit jnats out there.

Hi Wim, sorry to hear that you didn't like the stone. Just wanted to make 1 slight addition to your post.

I never mentioned during our conversations I was a Jnat expert. Thanks for helping to clarify that. There are other guys who definitely have more experience out there than me.

Hello @Froztitanz , just to make clear I have no problems with our sale, you were open and clear to me, it was a pleasure doing business with you. I also think there is nothing wrong with the stone, it's just no to my liking. Unfortunately in this world it's very difficult to try different stones before buying, unless you go to some shop straight in Japan.
Sorry if I put pressure on you saying that you are an expert, that's just the way I felt conversating with you, it is very true you never stated it yourself. I have removed this wording from the ad.

I hope I didn't scare potential buyers by being honest. I'm sure many people here like their natsuyas and I'm sure other- probably more experienced - people will like mine too.
The crack is really a minor issue really, fairly common with this type of stone, I'm just mentioning it for full disclosure.

Open for international offers and price drop: € 300 / $350
Shipment to CONUS isn't that expensive and could be done for $25 extra.
H

Wow, I will have to try an ikarashi then. I really disliked my natsuya so much as well

I totally understand where the OP is coming from, but regardless people are willing to pay $400+ for these things for some reason

I’ve seen where vendors get them for around $100 though, but then turn around and mark them way up

refcast said:
Yep, that was about how my natsuya was like, and I paid $375 USD.

It also is easy to surface crack . . . feeling wise, if you've tried amakusa, natasuya feels like a super consistent amakusa, but 1K. The sandinness/rubberiness in my example helped to make shallow scratches, and the rolling grit helps with making a dark kasumi. Mostly though, I sold it because I liked ikarashi more when I wanted a consistent finish, and it was fast enough to take out synthetic scratches. However, it's one of the fewer lower grit jnats out there.

Like how natsuya have some different varieties, there are also a couple different ikarashi. . .depending on how blue/green or white they are.

A video of sharpening on a natsuya:

And one from JNS:

PineWood said:
I hope I didn't scare potential buyers by being honest.
Click to expand...

No, at least you didn't scare me. And I feel good understanding what you think about this stone. This makes a lot of sense to me.

Offers highlighting the nice part only make me sceptical.

@refcast
Have you got experience with natsuya? I always like to get an idea what people look for from a specifik j-nat.
Last edited: Oct 27, 2021

I like how this sales thread is evolving in a really informative thread about natsuya. That's why this forum is so great, thanks everyone for the input. I wish I had known that much before buying the stone.
The link @refcast provided is describing natsuya as 600-800 grit and it's probably right. It feels definitely coarser than 1000-2000 grit.
R

My experience with natsuya comes from about 5 years ago. I had it at the same time as my Iida tool kozaki aoto, and ikarashi from Japanese-Whetstones.com

It was the natsuya from Japanese-Whetstones.com.

It overlapped with my other medium grits if I wanted to remove synthetic scratches, and of these, the aoto was the fastest but it scratched the iron almost as deep as synthetics.

I learned to more seriously wash and scrub stones when doing finish sharpening so I don't have grit contamination. That's the biggest thing with finer stones.

My opinions on my ikarashi and aoto haven't changed much. I keep the particular ikarashi I have because it's a good stone. Starts off thirsty and slow, but then the slurry clogs the huger pores and prevents it from drying. Then the abrasives can cut the steel. . . good speed, not super fast, but good, and it cuts consistent depth on iron and steel.

Natsuya is as I described above. . . on the harder side of jnats, but it always slurried a bit, and you can tell by the grey swarf, not black.

In the JNS video you can kinda hear how hard the stone is by the higher pitch. . . this also could indicate muddiness or clay-i-ness.

A monzento in Jon's video for example is a medium grit stone thats a good bit finer, but its so muddy that the sounds are all dampened.


There's still a tiny high pitch sound, and of course audio setups are different, but this is how a smoother, muddier stone will sound. It is still a bit scratchy-ish sounding because it's still cutting quite fast, and the rolling grit helps make the noise of sharpening. . . if there's enough clay or if the particles aren't as 'sharp', then the sound is more quiet. . .when I tested some stuff.

Natsuya would be good if you wanted a stiff stone that still acted soft in some ways.. . it will release very consistent rolling grit, which helps with shallow scratches. Also, the darkening of the iron tends to come from stones that release grit to roll around, so I believe that part is true with Pine's stone, based on the picture.

For instance, cerax 300 gives really dark iron, and it slurries and dishes faster than any other stone ive used so far.

Not completely related, but info about the village where it was mined:

Thank you @refcast , that fits other pieces of information I read.

OK, I've got other stones coming in, so let's find a new home for this one!
Price drop to €220 shipment included in EU or $270 shipment included for CONUS. For other destinations please contact me.
Mind you, Hitohira is selling natsuya at over € 400 in EU see here.
JNS is selling a smaller one at € 267 without shipping.
NOT saying these are all the same, just giving a price indication for this kind of stone.