extremely rare one of a kind stone

This is something extremely rare and beautiful. I have searched for years around the world and was always one rumor away from finding it. Once every four or five years I would see a photo or read and article with a little tiny mention of it, never any details.:eyebrow: a few months ago I finally got in contact with a guy who knew a guy who was sleeping with some other guys sister........... and so forth, who owned a mine in a country formerly known as b???a. We corresponded and after working out some trades and creative financing, they cut me a custom made stone out of solid jadeite. It came while I was in the hospital and nobody told me about it. I found it today sitting on the floor with a bunch of boxes ready to go out to the garbage.:bat: I opened it and thought I might have another heart attack :eek2:it is beautiful. I haven;t used it yet and probably won't. It is a nice mottled green, matt finish estimate 10k-12k if you can measure that. 200mmx 50mmx 25 mm. Here is the kicker, I am going to have to sell her to pay for my meds. Deep sigh! :sad0:$450 shipped. You probably will never find one in your lifetime and neither will I. Deep sigh:sad0: well here you go, new never used. 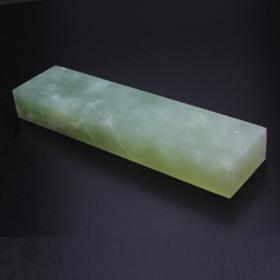 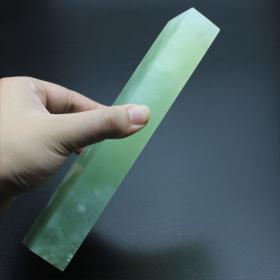 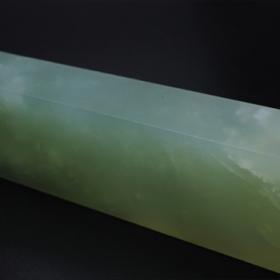 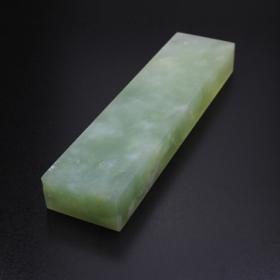 Completely off topic here.. but i feel for you man. Healthcare in the US seems like a pile of bull.. but perhaps i'm just getting "princessed" by our government.. as much as we whine about ours.


One sexy stone, one really, really sexy stone. As the person above, extremely wowed by it.

Can I make a handle out of it and then sharpen my other knives on it in a pinch?

JohnnyChance said:
Can I make a handle out of it and then sharpen my other knives on it in a pinch?
Click to expand...

I imagine you could. that would be cool.

:wow:um I so think that 450 seems cheap, and out of my league. but what do I know jaw dropping wow:ubersexy::notworthy::thumbsup2:

Crothcipt said:
:wow:um I so think that 450 seems cheap, and out of my league. but what do I know jaw dropping wow:ubersexy::notworthy::thumbsup2:
Click to expand...

it is cheap, but I gotta move it. Time and drug pushers wait for no man.

sachem allison said:
it is cheap, but I gotta move it. Time and drug pushers wait for no man.
Click to expand...

Daddy needs his Pills...
Wish I could help you out by taking that beautiful rock off your hands. It's a bear that you go through all that work to get it and have to give it up right away. I really feel for you, hell I really feel for me for not being able to get it :biggrin:

I've never heard of using jadeite as an abrasive. How would it work for that?

I read an article where someone was testing toughness / wear resistance of this stuff and they put it in rock tumbler with steel and some other tough stuff and everything was turned to sludge except for the jadeite.

So, I'm guessing that this thing wouldn't produce any mud. Maybe it would be more similar to a very fine glass stone or diamond plate than a jnat?

Really, I think that Son should just take it for a spin and post picturess/video

the thing is is Jadeite isn't particularly hard, but it is incredibly tough and wear resistant because of it's structural make up. They used to use it to make swords, daggers and axes. not as tough as nephrite jade because the structure is different, but the two stones are regarded as the toughest on earth. It has the translucency and feeling of a novaculite.

how is this different than jade or is it the same stone?

mainaman said:
how is this different than jade or is it the same stone?
Click to expand...

There are two stones that are recognized as true jade, nephrite also called old jade or fat jade which is considered the toughest stone on earth and jadeite which in super fine quality is the most expensive gemstone in the world. This one is Jadeite jade also called Burma jade or new jade, but not gem quality.

I really don't know, I have never used a nagura stone.

I think that this would be a place where the nagura would be used on this stone. The nagura adds abrasive to the working surface. The natural structure of this stone would hold those abrasive particles so that could work on the blade, without grinding the surface of the jadeite down.

That is a wild stone. Beautiful.

Sorry you have to let it go, but happy you are still with us.

Is that from Myanmar? I now have THREE friends there.... but they don't know a damn thing about knives or stones or...

Anyway, that story if freaking amazing and sad. I hope your health improves "impossibly" well and quickly!

Wagstaff said:
Anyway, that story if freaking amazing and sad. I hope your health improves "impossibly" well and quickly!
Click to expand...

If you didn't live 3,000 miles away, I would pay $500 up front for some cooking lessons so you could hang onto that stone.

Hate that you have to sell it but hope you find a buyer quickly.
T

Wow. You get your hands on a lot of cool stuff, Son.
S

I say keep the rock. Post up some kitchen tips / tricks / cool ideas once a week when you have time and i'll ship 20 bones to a paypal account. I'm sure other some other members (hopefully more generous and more...employed...than me) will do the same

Wagstaff said:
Is that from Myanmar? I now have THREE friends there.... but they don't know a damn thing about knives or stones or...

Anyway, that story if freaking amazing and sad. I hope your health improves "impossibly" well and quickly!
Click to expand...

I can not confirm or deny, that this piece of perfectly legal B@#$a Jadeite originated in said country.

If you didn't live 3,000 miles away, I would pay $500 up front for some cooking lessons so you could hang onto that stone.

Hate that you have to sell it but hope you find a buyer quickly.
Click to expand...

Well, thank you, but I have finally learned over these last five years that they are just things and that they have no hold over me. At least I got to finally touch one.haha.

you don't know the half of it, you should of seen the stuff I would get when I was running guns. people would trade you just about anything for a gun.

6 Angus ribeyes (that fell off the back of a truck) for a walther ppk?

jadeite toughness:
http://webspace.webring.com/people/wj/jadejewelry/Jadeite.tough.html
"You will find that when cutting Nephrite and Jadeite, Jadeite takes longer and wears the cutting material more. Jadeite can be used to shape Nephrite tools, whereas Nephrite is useless against Jadeite. Put Jadeite and Nephrite, steel, and Quartz in a tumbler, I have. The Nephrite, steel, and Quartz will be ground to about half their respective mass, whereas Jadeite looses only a small fraction."

Hardness:
http://en.wikipedia.org/wiki/Jadeite
According to wiki, it has a hardness of 6.5 - 7, which puts it up in the range of some fairly hard stuff like quartz.

So, I have no question as to the theoretical ability of the stuff to abrade steel, but I don't know enough about the microscopic crystalline structure to be able to tell how it actually works or what the scratch pattern would look like. The only jade that I've ever held was in jewelery or art an it was polished very smoothly.
You must log in or register to reply here.
Share:
Facebook Twitter Reddit Pinterest Tumblr WhatsApp Email Link