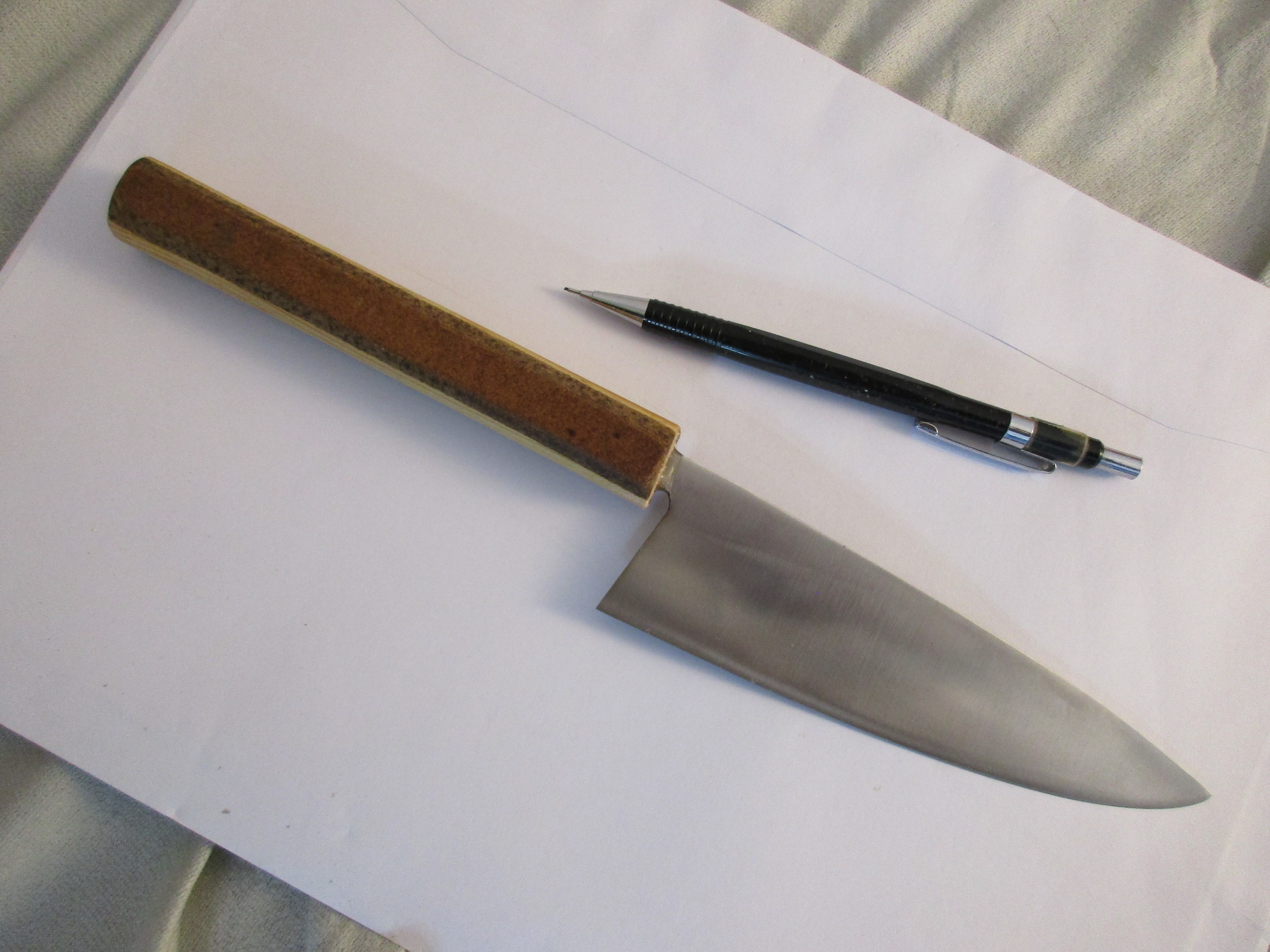 Here is a picture of the first knife I "made" a few days ago - it used to be an IKEA chef's knife from this series here: https://www.ikea.com/de/de/p/aendlig-messer-3er-set-hellgrau-weiss-70257624/, except it was the longer 20cm version that is no longer sold by IKEA.

I used it to practice thinning and buffing on my belt sander when the buffing wheel caught a bit of edge and hurled the knife out of my hand and into the ground so hard the blade snapped off at the handle (narrowly missing my bare right foot in sandals, holy ****, not gonna do that again). As it turned out the blade had been half broken at the handle anyway; you could tell from the rust on the fractured half of the tang.

Other than that the blade was still fully intact and I deemed it too nice to throw away. So what I did was to use my angle grinder to cut a "corner" from the heel that left me with a half-inch wide short tang. For a handle I used some pine wood from the scrap box in my basement with a layer of particle board on each side. No idea what it used to be, maybe some cabinet door?

I split the stick lengthwise with a blunt saw, carved a groove for the short tang into one of the halves with a wood chisel and then glued everything together again with a massive amount of 5-minute epoxy glue. The knife is a horror to all real knife makers out there, I know, but it ws a fun project and I enjoy getting some further use out of a knife that most people would have thrown into the thrash.
Last edited: Mar 28, 2019

Nice fix! :thumbsup:
...and yet another good reminder that the buffer is one of the most dangerous tools in the workshop...
M

Too true ... I once did a really nice thinning job on a cheap no-name brand gyuto, almost flawless if I do say so myself, then bufffed the bladeface and on the very last pass across the buffing wheel it caught the spine and slammed the edge of the knife right into the metal base of the motor. Now I have a pretty good ding in the knife. Fuuuuuuuucccccckkkk!!

Ah yes the furry wheel of DEATH!
You were seriously gambling against the cosmos wearing sandals doing anything in a shop setting.
Pants/boots/leather apron/gloves/respirator/eye protection....you only 1 I consider optional is gloves depending on what your doing.
In any case at least you were not hurt....go play the lotto

I like the idea of up cycling, looks good for a 1st project. Keep at it and stay safe.
F

Simple but very nice knife to say the least
M

Nice rehab. Still not sure where the particle board went into it though.
M

Often I find the rehab and tuneup projects the most fun. Takes a lot less time and boring grindwork than making a new one from a strip of metal.
F