I picked up one of those XXL stones, too. Out of the box, the stone was smooth and flat on one side, and it had a few minor surface undulations and cutting marks on the other side. A few minutes with an Atoma 120 and 400 got both sides very smooth.

The edges of the stone were very sharp, so I chamfered them a bit. The two sides of the stone are almost, but not quite, parallel, maybe 1º off. (Not that this would matter.) The strata runs parallel to the cutting surface on mine. It looks and feels a lot like fine slate. I don't think it is slate though—the texture of the grain is finer than any slate I've seen.

Not surprisingly, the stone doesn't absorb any water. It's splash and go all the way.

So far, with that stone, I've sharpened only two Opinel Carbone knives that were quite blunt and needed a touch-up. Normally, I'd just use a 3000 stone for that, but decided to try them on this one instead.

This is a hard stone. I think it'll take me years (probably more than my remaining life span) before it will need flattening.

And this stone will probably outlast three generations of sharpeners. Good value for money!

Here's a pic of the scratch pattern. Fine feather scratches. I would call it bright but hazy. 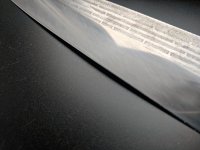 Here is the pattern for shapton glass 8k for comparison 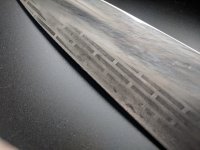 I have re sharpened the new CarboNext sujihiki, finishing it on the big brick from Etsy. Just for fun, I sharpened a couple of the (real-ish) D2 Chinese pocket knives first on an (allegedly) 3,000 grit Chinese diamond waterstone then de burred with a natural cork before finishing on the big brick, all were very briefly stropped on denim with a bit of "Flitz" metal polish. 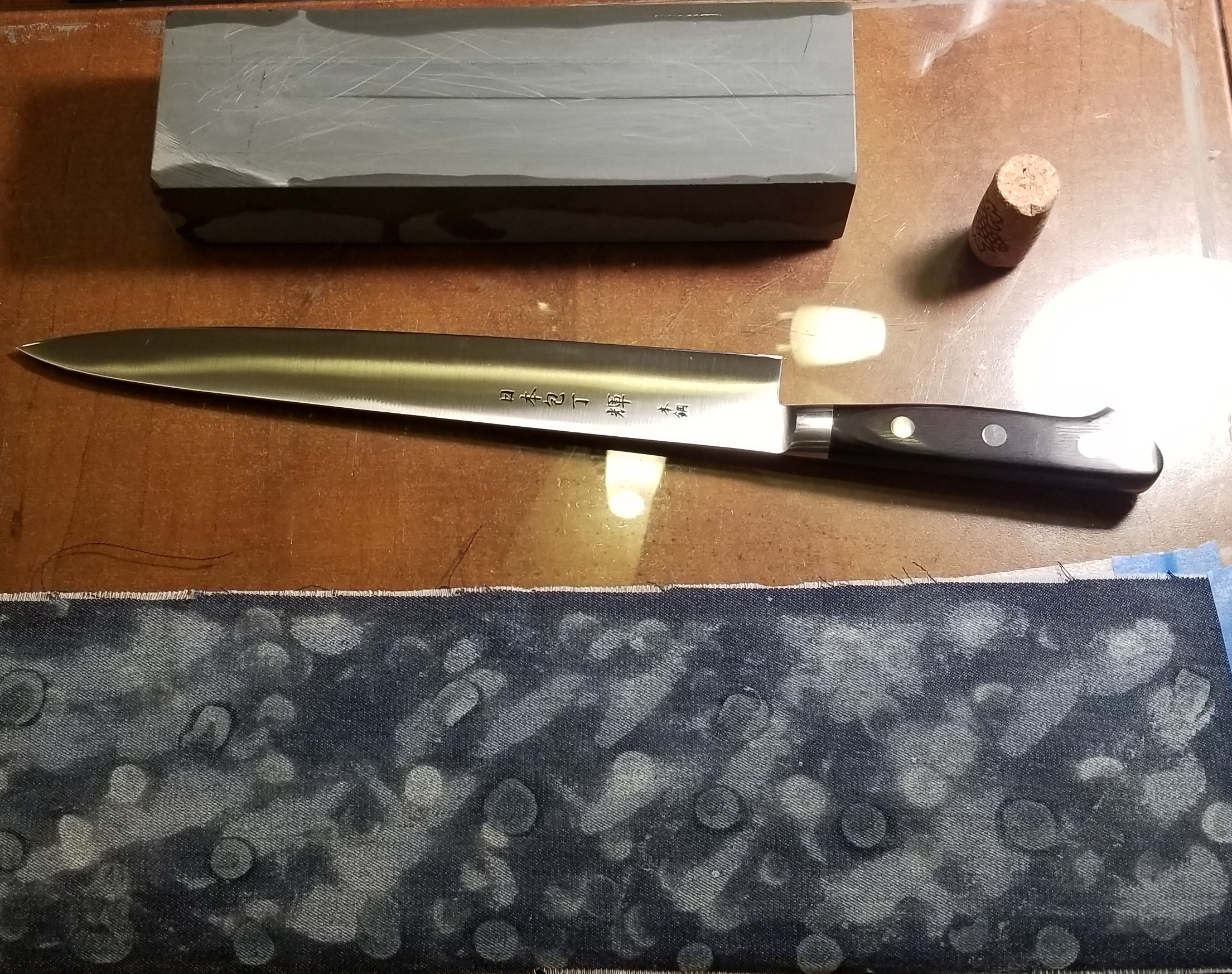 Outstanding results, among the best outcomes I have had with semi stainless or stainless steels.

I have started using the denim stropping material over a thin layer of a quite firm closed cell foam plastic which is normally used to make the cores of broadhead archery targets, the two layers supported by a piece of heavy "float plate" glass.

This layering with this foam gives more compressability and "spring" to the denim surface, stropping can then be done with a flat ground/scandi ground blade with the barest of secondary bevels laid flat on the denim, it becomes easy to keep the optimum angle. All I do to tune effect is vary pressure, very light pressure with minimal number of passes seem to work best for me, given a well de burred and freshly sharpened edge from "the big brick".

The science of sharp site owner makes the point on one of his pages that much of the effect of strops is dictated by firmness/springyness of the surface bouncing back from compressed state as the edge is drawn over it. I'm trying to "tune" this, inital results suggest it works.

If anyone wants some of this foam to experiment with, I have several bales of it. Makes a good packing material for stones sent in the mail too. I needed to blow up targets for a TV commercial and they were too tough to blow up with their guts still inside-

Bert2368 said:
I have re sharpened the new CarboNext sujihiki, finishing it on the big brick from Etsy. Just for fun, I sharpened a couple of the (real-ish) D2 Chinese pocket knives first on an (allegedly) 3,000 grit Chinese diamond waterstone then de burred with a natural cork before finishing on the big brick, all were very briefly stropped on denim with a bit of "Flitz" metal polish.
Click to expand...

What do yo think about the "(allegedly) 3,000 grit Chinese diamond waterstone".
BTW the big brick from Etsy is on the way.

I think the scratch pattern left by the Chinese "3,000" is rather coarser than from my Shapton 2,000 and finer than left by my Shapton glass 500.

Comes with a small stone for flattening or removing glaze/stuck on steel. Does NOT wear fast. Have needed to remove steel buildup 2X so far.