Up for sale is a gently used Gengetsu 240 in stainless clad w#2. I am the second owner and purchased it here on KKF.

A few notes about this particular knife: the original owner had this gengetsu professionally thinned and refinished by JKI soon after purchase. It is now an insanely wicked cutter, as the choil shot below suggests. The refinish is kind of a hazy hairline that extends all the way down to the edge in order to aid in food release. It also looks like JKI reinstalled the handle with a touch more neck than the stock version. My speculation is that this was done in order to maintain the balance point after thinning, but it's also possible that this was purely incidental. Regardless, it has the added benefit of providing a bit more room for your fingers. Finally, there is a bit of marbling on the ferrule that you can see in the photos.

I am also including a couple of pictures below by the original owner that do a better job of capturing the refinish and portray the balance point (forgot to take a balance point photo and now the knife is all packaged up). Please note that I have used the knife to slay some onions since the original owner's photos were taken, so it now has the partial patina on the exposed shirogami core that you see in the first few photos. I have not sharpened the knife since receiving it, and it has only been used a handful of times.

it's yours for $245! Shipped/insured CONUS. PPG&S only, I eat the paypal fee.

And now, the part you've all been waiting for: 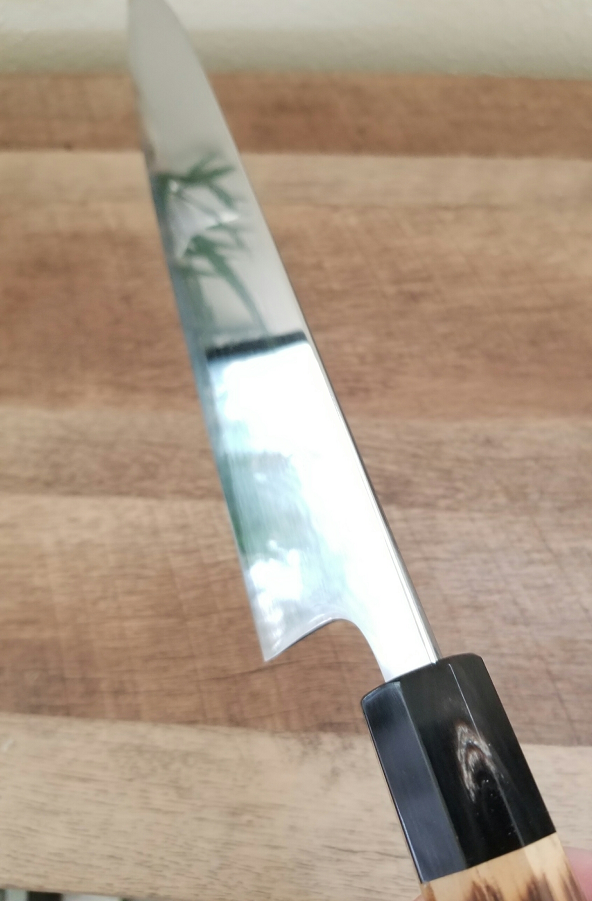 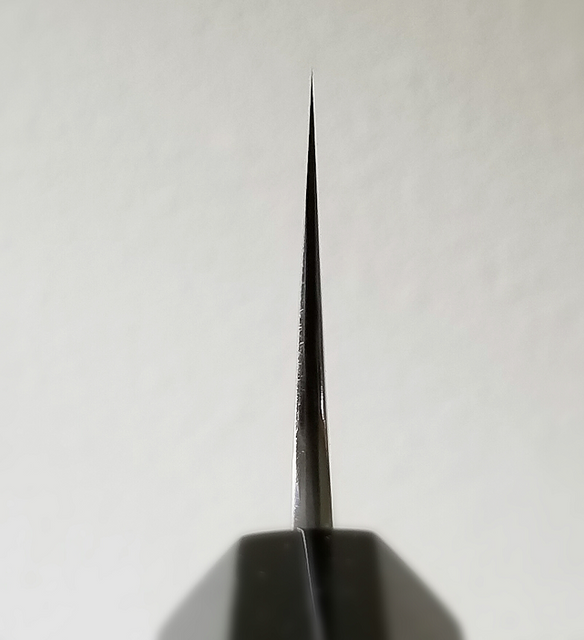 Next are the above mentioned photos from the original owner that do a better job of showing the refinish by JKI, and also show the balance point since I forgot to take a balance point photo before packing up the knife. Again, please recall that the knife now has the partial patina shown in photos above. 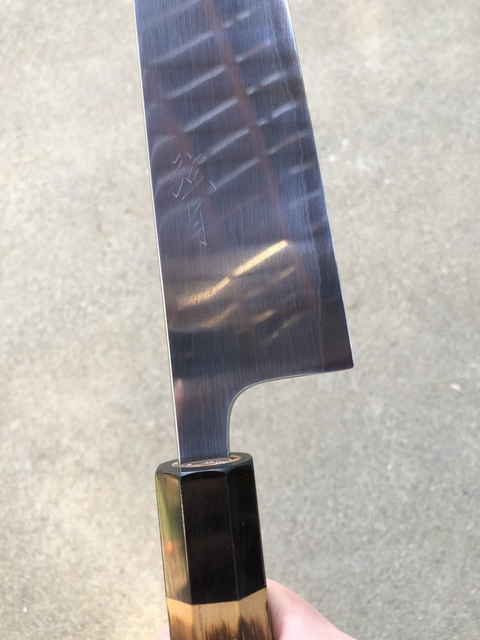 Wow that looks awesome. Someone is going to be super happy with this.

Do you remember by chance where the balance point is approxiamately?

oh and what’s the edge length and height?

Runner_up said:
Wow that looks awesome. Someone is going to be super happy with this.

It's sick knife for sure. But somehow I ended up with three gengetsus and I don't think it's fair for me to hoard them all

Chang said:
Do you remember by chance where the balance point is approxiamately?

oh and what’s the edge length and height?
Click to expand...

Using my tape measurer, it looks to be almost exactly 240 in length, maybe 239. Height looks like 47mm. The balance point is just forward of a pinch grip, as depicted in the last photo above .

And weight is 166g per my kitchen scale: 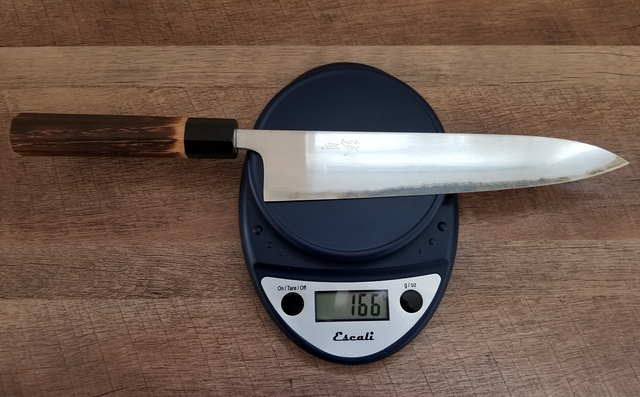 These are such good lucking looking knives.

Wow! That one really calls to me. Too bad I have too many knives in that pattern and length already or I would probably have it headed my way.
T

I be all over this if I don’t have too many knives already, that grind is sick

Hell I'm thinking about it - number 5.

MontezumaBoy said:
I've never forgiven you for selling that 180 mm ... just saying ... sad face now that i thought of it again ... of course chuckle's deserves it more than me but still "not fair" ... even sadder face ...

lol it's okay any press is good press

Really curious why "the original owner had this gengetsu professionally thinned and refinished by JKI soon after purchase." Stock gengetsu geometry is like SO wonderfully thin!

ian said:
Really curious why "the original owner had this gengetsu professionally thinned and refinished by JKI soon after purchase." Stock gengetsu geometry is like SO wonderfully thin!

The heart wants what it wants!

And SOLD! Thanks KKF