Small black spots from long-term storage. They will go away with sharpenings. Original deeper grinding marks still present at heel. Bevel is even and has slight clamshell. 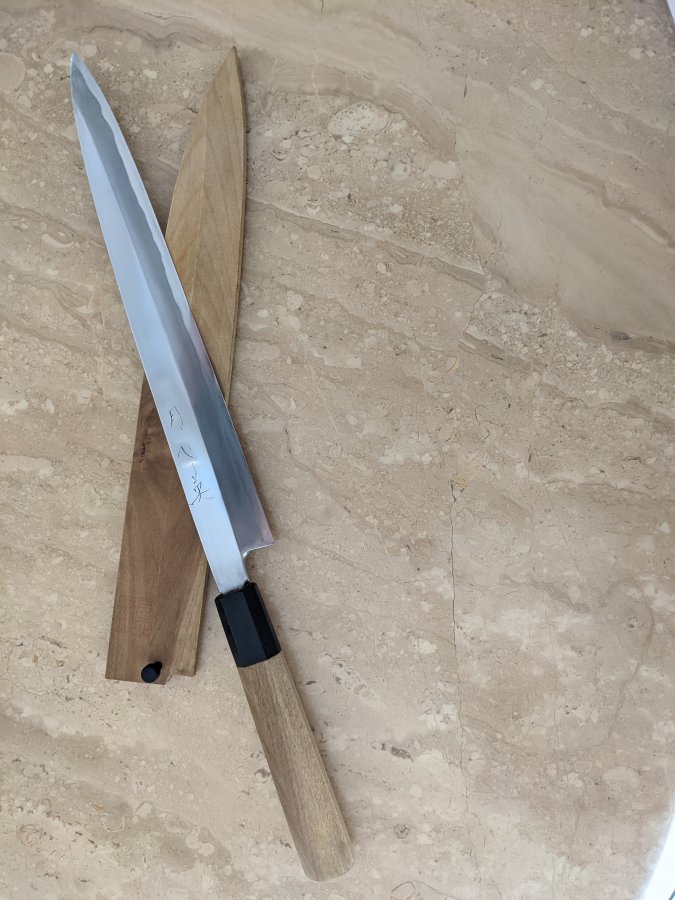 Did you sand the hira? The reason I ask is because the shinogi looks rounded.
R

can you tell us more about what work has been done on it?
R

Yeah I did. I can resharpen the bevel if you want it super crisp though.
R

I sanded the blade face and the ura to make the grind marks less deep. The bevel was flattened and then slight conexing. I ended up rounding the shinogi a bit though.

Bevel is uchigumoru fingerstones then metal polish and jnat powder.

Thank you for your honesty
R

When I tried it stock the more pronounced shinogi helped with food release, but I would have to press down a bit more and making thinner cuts wasn't as nice as I wanted. This was 5 years ago when I didn't know as much, but those were my preferences then.

It's like the laser vs food release debate I think except I knew less and was was wrong. I think I understand grinds more now, and a crisp shinogi helps food release way better than a rounded one.

The hira was a bit concave stock, which I didn't like as much and made the shinogi crisp and pronounced, but also thicker at that ridge.

The hira near the heel is still a bit that way, but the ridge is reduced. I asked Jon about it a bit day back then, and what I remember was the makers ( whether in general, the region, or this maker) doesn't focus on making the hira flat.

I'll probably sharpen it tomorrow to get the little dots on the hard steel out.
Last edited: May 14, 2021
R

Those black spots were from fingerstone polishing I found, without making the water alkaline enough.

I don't use the knife much, so