As some of you guys may know, Saori (owner of Korin) is also the founder of a non-profit organization called the Gohan Society (http://gohansociety.org). This organization's mission is "to foster an understanding and appreciation of Japans culinary heritage in the United States through outreach to chefs, culinary arts professionals and all who admire and enjoy Japanese culture." Every year for the past 10 years, the Gohan Society selects 3-4 scholarship applicants to Japan to train under some of Japan's top traditional restaurants. This year was the first time I was invited to attend the scholarship program as a translator for the 4 chefs, so I wanted to share pictures from the scholarship program. :biggrin:

This post is part 1 of 2 (or 3) of the scholarship program. I hope you guys enjoy!

This year we sent these chefs to Kanagawa city in Ishikawa prefecture.

Kanazawa city is home to some of the oldest ryotei restaurants in Japan. The Gohan Society had the honor of working with: 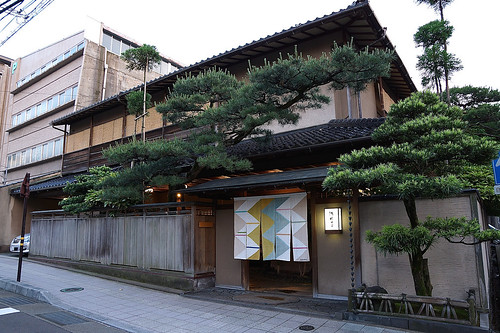 - Asadaya - Asadaya is more than 140 years old and the most famous ryokan, or traditional Japanese inn in Kanazawa. It has only 4 elaborate rooms for guests in order to provide perfect services in accordance with the "sukiya" style of simplicity. It is an unforgettable dining experience combining traditional local cuisine, seasonal fish and produce with refined dinner-ware. 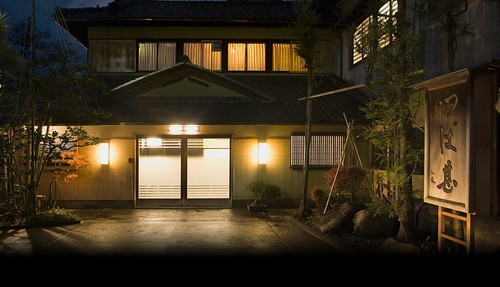 - Tsubajin - Before exploring the world of cuisine, many generations of the Tsuba family had been artisans of making a Tsuba-sword guard in Kaga Province. In 1752, Jinbei Tsuba III opened a small restaurant besides his main business of sword guard making. This is the origin of Tsubajin as a Japanese restaurant house (Ryotei). The restaurant gained a great reputation among the feudal lords, and soon it was recognized as the best restaurant in Kaga Province. After the Meiji restoration in early 19th century, literary masters including Saisen-Muro, political figures including Ito Hirofumi, the first Prime Minister of Japan, had all dined at Tsubajin to enjoy Kagas specialty food. 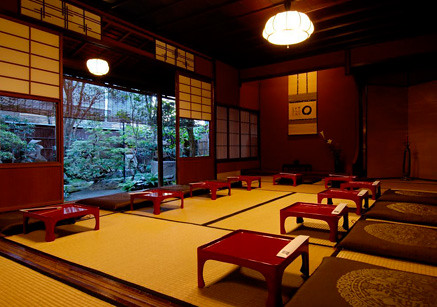 - Kotobukiya - Kotobukiya is the only ryotei (high-class Japanese restaurant) in Kanazawa that offers shojin ryori (Zen Buddhist vegetarian cuisine) on their standard menu. This ryotei in a 150 year old Japanese house that has been designated as a cultural asset by Kanazawa City. 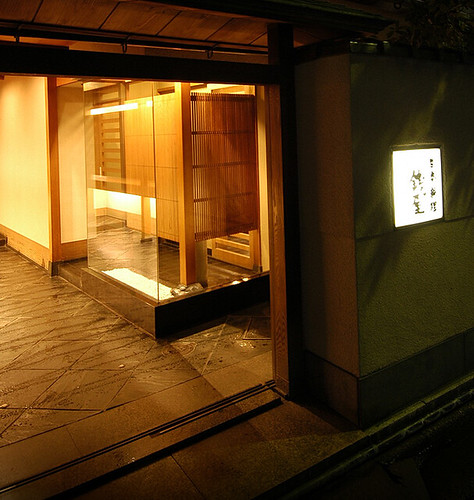 - Zeniya - The pinnacle of Japanese cuisine is a collaboration between the content and the container. At Zeniya, Chef Shinichiro Takagi supervises every ingredient and detail of decor. From every dish and vessel to every flower, making each creation a perfect instant of harmony. Zeniya specializes in "IshokuDogen": literally translated as food and medicine are of the same source, is an ancient concept from China which expresses the simple idea that both medicine and one's daily food are equally important in keeping oneself healthy and active.

What is ryotei?
Ryotei is the term reserved for Japanese-style eating establishments of the highest quality. Such restaurants may be run by famous chefs or have long and distinguished histories of 300 years or more; they offer the finest and most refined of Japanese cuisine... The origins of ryotei may be found in the late sixteenth century, when fine dining was offered at temples on the scenic slopes of the mountains surrounding Kyoto. Large-scale ryotei made their appearance in Edo (now Tokyo) and Osaka in the eighteenth century; these sometimes consisted of expansive gardens with a number of separate buildings, each accommodating private groups of diners. The service provided might include not only fine food, but entertainment such as song and dance, and even possibly a dalliance with geisha.
- Kikkoman

The scholarship program began in a small town called Yamanaka in Ishikawa prefecture, where we stayed at Kayo-tei Japanese Inn. This inn only has 10 rooms, hot spring baths, and is famous for their award winning breakfasts.

The front of the ryokan

About Yamanaka:
Yamanaka has developed into one of the most prominent producers of lacquerware in Japan and is especially known for Kutaniyaki porcelain. In the early Edo era, this new kind of porcelain was created in the village of Kutani, Enuma-gun.

Yamanaka Onsen is the hot spring town nestled in the mountains, where the traditional culture of Yamanaka lacquerware prospered. Running through the center of the beautiful green Kakusenkei valley is the Daishoji River. In the valley, many Japanese-style hotels with beautiful views and sounds of the river are built along the banks of the river.

When the scholarship awardees arrived, they were greeted by Chef Michael Romano of Union Square Hospitality who took them on a how to Japanese hot spring tour after their long flight to Ishikawa prefecture.

After their hot bath, the people of Kayo-tei had late night dinner ready for them.

The next morning we had Kayo-teis award winning Japanese breakfast.

The people of Kayo-tei took us to various visit local artisans of traditional crafts.

We tore apart the ganpi tree fibers that she collected that day from the mountains.

What is ganpi?
A species of flowering plants
Tree height: about 1-2 m
Used for paper making more than 1300 years ago.
Grows on sunny mountainside, and Kaga Onsen area is the northern most point of its natural habitat in Japan.

Boiled the fibers than hammered it into a finer pulp.

Then we were all set to make the paper.

They let me make one too. 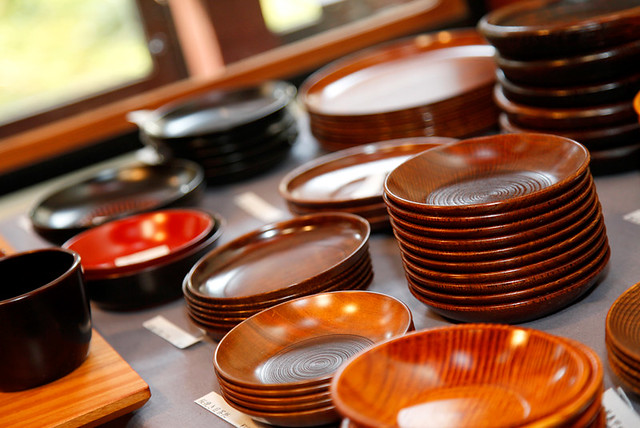 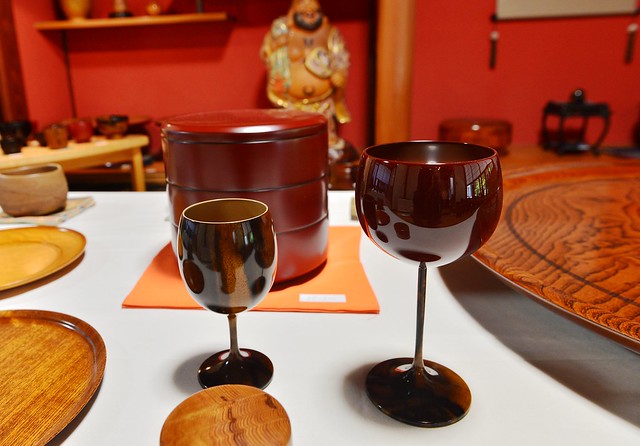 What is wagashi?
Wagashi are traditional Japanese sweets, typically involving sweetened beans (not always red beans). This type of sweets are eaten during tea ceremonies and accompanied with matcha green tea. As you may already know, real matcha (not the stuff in the tea baggies, the powdered stuff) is super bitter. These sweets balance out the bitterness and is delicious together.

Chef Kuroda was famous for making these sweets.

Mixture of potato and bean paste

Much trickier than it looks.

WHEW. Thank you for reading part 1 of the scholarship program!
I will work on part 2 now.

It's always a treat when you share your adventures in pictures, Mari. Thank you : )

WOW! Thanks so much for taking the time to write that up. That looks like a great adventure -- congrats to those who were chosen; I am sure this will influence them tremendously.
K

Thank you so much for reading them guys!! :doublethumbsup:

Awesome! Thanks for sharing this with us Mari.

Thank you Mari - what an amazing adventure! Please sign me up :justkidding:

Outstanding Mari! It's nice to see a few familiar faces from the old GS workshops.
I do sorely miss those. Please give my best regards to Kawano-sama.

Thanks for sharing. Brings back lots of memories for me: In college back in the early 90s I studied Japanese language and literature on a foreign study program. I was there living in Kanazawa for about four months with a homestay family. Umeboshi for breakfast everyday. Kenrokuen and the surrounding countryside is beautiful. I may have gone to the same paper making studio for an afternoon outing. I would love to go back to Kanazawa one of these days with my family. :doublethumbsup:
K

Heeeey are you the same Mr. Klip that was at the Korin Chef's night and helping us serve tuna to everyone? You came into Korin this week too, yea? LOL

Hi Mari san, yup that's me! Nice to touch base with you over KkF
K

Castalia said:
Thanks for sharing. Brings back lots of memories for me: In college back in the early 90s I studied Japanese language and literature on a foreign study program. I was there living in Kanazawa for about four months with a homestay family. Umeboshi for breakfast everyday. Kenrokuen and the surrounding countryside is beautiful. I may have gone to the same paper making studio for an afternoon outing. I would love to go back to Kanazawa one of these days with my family. :doublethumbsup:
Click to expand...

That's so awesome!! Kanazawa is such a lovely city. You should definitely go visit again. They have such an amazing food culture there. :biggrin:
K

jklip13 said:
Hi Mari san, yup that's me! Nice to touch base with you over KkF
Click to expand...

Cool! I'm the instagram-er that said hi in the showroom. That's awesome that you're on here. Were you looking at stones for KKF?

Korin_Mari said:
Cool! I'm the instagram-er that said hi in the showroom. That's awesome that you're on here. Were you looking at stones for KKF?
Click to expand...

Yes of course, I remember you. I was trying to persuade a friend back in Canada to get that stone.
D

thanks for sharing cant wait to see part two.
T

Some day, (soon I hope) I intend to visit that part of the world, and your pictures only made the longing more palpable! Thanks for sharing.