My grand nephew's fiancé (mid-20's) has been wanting to come over and talk kitchen knives forever and we finally made it happen today. She has a very nice Mercer 8" chef's knife that was given to her as a gift sometime ago. Seems she was getting interested in cooking and loved the knife so her folks bought it for her. Sadly, they also bought her a pull-through sharpener to go along with it. Now, it's a nice knife but it is a full-bolstered beast and well...

She had been sending me pictures of myriad damascus knives she liked and was especially fond of the Shun Miyabi. I would send her some links to other knives and she wouldn't say much. Now, I'm in no way down on damascus or the Shun, but it was obvious to me that she was just getting googley-eyed at the looks and not considering price or performance. Understandable as she had no experience.

I don't have a large collection of kitchen knives but I do have some diversity, and they're all pretty budget friendly.

These are the knives she played with today: 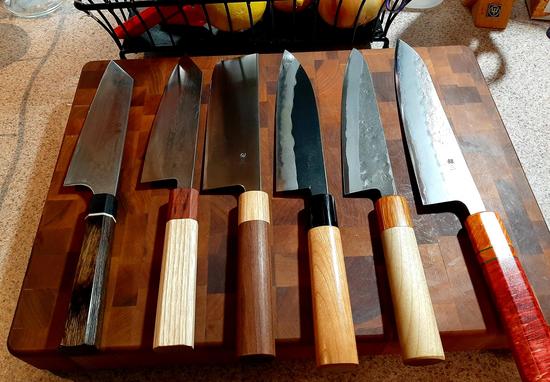 She actually has pretty good knife skills. Pinch grip and claw support. A little rough but just needs some time. She also has a couple nice cutting boards so she's well on her way!

We talked knife nomenclature, differences between German and Japanese knives (build and usage), etc. I had a passel of carrots, celery, and radishes that we worked on together. I showed her fine cuts and let her try, I showed her how a thick carrot snaps at the bottom of the cut with a thicker knife and she really practiced push and glide type cutting. When she started making transparent radish slices she was pretty jacked.

Then, out of nowhere she said, "This really makes me want to cook."

I jumped all over that and talked about how the cut types can change food and the cleaner cuts and just generally feeling inspired cuz you have knives you enjoy.

It was a ton of fun. We ended up needing to eat dinner and stop playing but she surprised herself by having a real fondness for the nakiri and the Tadafusa. She said she hated the looks of the nakiri's I'd sent her but after using one she didn't care about that anymore. And she commented several times about how surprised she was that she liked the shorter lighter knives. She also commented several times about differently the Japanese knives cut and how effortless and enjoyable it was. It really did blow here mind and after a couple hours she was all about function (mostly) over form.

I sent her off with my old Wusthof utility and pairing knives (they pretty much just had the monster chef knife) and my well used but still functional strop.

They're just kids starting out so they don't have any money so we're focusing on bang for your buck stuff. I sent her a link to a Harakuze G3 nakiri and she loved it.

Anyway, it isn't very often someone comes to see me specifically to talk knives and I had a great time! I have no doubt she'll be back. She said she wants to learn how to sharpen.
Last edited: Aug 29, 2021

Great story. Feels good to pass on a bit of the hobby and expand someones experiences with something they may not have ever pursued on their own. Sounds like the beginning of a beautiful friendship.

I know the world is crazy and sometimes it seems like we're all going to just rip apart at the seams but kindness continues to surge through people. Generosity persists and it is wonderful and inspiring.

After my original post, I was contacted privately by a KKF member who wishes to remain anonymous. He was wanting to send the girl who is the subject of that post a knife. I declined but he insisted. Realizing the gift wasn't for me but for someone just starting out and knowing they would genuinely appreciate it, I politely accepted and offered to pay shipping. He declined. I offered a swap of sorts and this too he declined. He just wanted to send the knife and know it went to a good home.

At the time, all I knew was that it was nakiri. Little did I know, it was a very nice nakiri. The donator described the recipient as my "soon to be grand niece in law" and let me tell ya, she is going to absolutely love it! She wanted damascus right from the outset. I haven't told her what she is getting and have been teasing her with shipping updates. I'm waiting for her to let me know when she can come pick it up.

A truly stunning gift from one stranger to another! I'd be lying if I said it didn't tug at an old chiseled vet's heart. I only opened it for a damage check and didn't touch the knife. It's wrapped back up for her.

And to the donator, thank you. Thank you for reminding us all that kindness and generosity will never die and for inspiring me at the least, to choose them when I can. This also came at a good time for our family and is/will be uplifting and much appreciated by a wider group.

Great story.
Congrats to the donating member; truly making the world a happier and better place.
I'm looking forward to her reaction

Can you write a story about me and my secret wish for a KAMON massdrop knife?
Always nice to see people pass it on! I think gifting a nice is one of the best ways to truly convince people of 'better knives'.

Great story, and I’m so happy to see how it all worked out. This community continues to amaze me with how generous and kind everyone is.

On a side note, I dream of the day I can take someone through a progression of knives and show them what all the fuss is about. Nothing better than being able to share something you’re passionate about, and then also see it positively impact them in the process.
T

To the anonymous donor, this post made my day. Thank you for your generosity. That kind of positive spirit is inspiring!

I enjoyed reading this, thank you
J

That is so cool. Well done, anonymous KKF member, and congrats to a new J-knife aficionado!

What a wonderful gesture by someone with a big heart.
C

That's a truly lovely story -
thank you to both OP and the anonymous gift giver for warming my heart up.

She came and picked up her knife tonight and to say she was excited and appreciative is an understatement.

After her initial ooo's and ahhhh's she wanted to take some pictures to send to her family, mostly her mom, who she had told about the whole experience so I took her to where I take my pics so she could catch the light. I went to grab her some mineral oil for her cutting boards and handle and when I came back in, I absolutely freaking kid you not she's trying to take a choil shot!

I mean, the knife flipped upside down in one hand and the phone in the other. I chuckled and she said she couldn't get her camera to focus. Yep. We all know that one! I remembered a tip I read recently I think from @Delat about using a white background so I tossed a napkin down and held the knife for her so she could be steady.

I told her to send me the pic and this is it:

I mean, a choil shot. She was taking a choil shot! It turns out she's been telling folks all about the lightness and thinness of these knives and she wanted to show them what she had been talking about. As she explained it to me, I just kept thinking she gets it!

Anyway, we talked care and maintenance and storage and use for a little bit. Before she left she said that every time she's cooked since our visit she thinks how nice it would be to have one of those thin knives. Well, now she has a beautiful one of her own.

She wants to practice some cutting but she promised to send me a picture of the knife with some ingredients down the road.

The picture I just received with a text reading, "My favorite knife!!!"

Her dad made the cutting board. Great way to end the week!
T

This thread is so dope.

Here is the link provided by the original owner/donator:

Size: 17 cm (6.5"). The NWD nakiri is 45 layers with an AUS10 edge, damascus finish, and rosewood handle. Light, nimble, and sharp, laser through prep in style.

I hope you mentioned it is not really hers until it draws her blood...

HumbleHomeCook said:
Here is the link provided by the original owner/donator:

Size: 17 cm (6.5"). The NWD nakiri is 45 layers with an AUS10 edge, damascus finish, and rosewood handle. Light, nimble, and sharp, laser through prep in style.

Looks super-nice. I’ve recently been thinking about adding a nakiri to my collection and remembered this thread.

Delat said:
Looks super-nice. I’ve recently been thinking about adding a nakiri to my collection and remembered this thread.
Click to expand...

I didn't really use it so am afraid I can't give any meaningful input. It felt light and nimble to me the brief amount I messed with it. I can tell you that she loves it and my nephew says she's been finding excuses to cook stuff ever since receiving it!
J

I am guessing many of us can relate to that!

This whole thread is just the best!! Totally bringing together the best of the forum.

"I'm not crying, YOU'RE crying!" LOL
What an amazing story!