Please provide your thoughts and opinions:

Sharpen like the most experience free-hand knife sharpener. This sharpener copies the movement of freehand sharpening while maintaining the perfect angle for the user.

This sharpener can be used with any stone size. This includes the stone holder and the sharpening fixture. Stones can be purchased separately.

The standard knife holder can be swapped out for Magnetic Knife Holder. The magnetic knife holder used two N52 neodymium rare earth magnets to securely hold your knife in place. This removes the need for clamp and speeds up the setup process.

I Am Jack's Complete Lack of Surprise

I assume it allows rotation in horizontal axis, so that belly and tip can be sharpened?

I'd be very interested to hear people's thoughts if this does end up happening. I've spoken to lots of people who use guided systems, but they're not often also very experienced free hand sharpeners, and might not be sharpening some of the more unusual styles of knife. It'd be cool to hear for instance what something like this makes of a yanagi...

Barmoley said:
I assume it allows rotation in horizontal axis, so that belly and tip can be sharpened?
Click to expand...

This is one thing that puzzles me slightly about systems like this... presumably it not just allows rotation, but forces it, as you go down the edge(?). Otherwise it's not really a guided system. The knife in the pic above looks like it has quite a short amount of flat edge and then a long gentle upsweep to quite a high tip (it's a rock chopping knife basically). So it's going to need different rotation to the majority of gyuto.

So how do you set how much it changes, to make it correct for the profile of the knife?

(Probably a q. for OP, rather than yourself!)
B

Look interesting.
How do you set the angle on the sharpener ?
Is the 10° per side a lower limit ?
What is the deformation

The stone is in the correct position to maybe have some feedback and work on various amounts of slurry. Something that is completely missing on most guided systems I see.
That being said I have zero experience with guided systems, so there is that.
M

First I'll say I'm a novice freehand sharpener at best at this point. But, I do have experience with a KME sharpener and have gotten pretty good at that so I'm looking at this somewhat relative to the KME. I'm also not trying to come across as a KME fanboy ... but I do really like it for some things and others not so much. That said, I think this is interesting system for sure and I think this might actually work but I'm a little undecided about what happens at the tip mostly regarding the angle ... I need to noodle on that some more.

One of the drawbacks to the KME is doing longer blades ... while you can do them it gets challenging around and beyond the 6 inch mark, You have to be more concerned about angles at the extremes and blade alignment in the jaws to maintain those angles but I think this gets around that issue since your moving the blade to the stone and not vice-versa.

Also, as blades get longer that are thin and not a nice and beefy chefs knife - think cheap steak knives or long thin carving knives for example they tend to bend at the outer extremes with a KME. I think that this system would most likely have that same issue. It can be overcome with some care with hand placement over the ends or wherever the blade meets the stone along with careful application of pressure. This isn't an issue freehand sharpening because we are supporting the blade over the stone with our fingers.

Another concern ... the jaws do not appear to have any sort of rubber or anything between the jaw and the knife blade and if not then this is a setup for scratches, marks, ... etc. Depending on the knife it could be a showstopper depending on how much you care about scratches, dings, dents, ... etc where the jaws hold the blade.. But that could easily be overcome with some rubber, neoprene, ... etc.

Another concern with smaller blades - we can easily freehand a 3 inch EDC type knife, or paring knife, but with so much less blade to grab onto what becomes a problem is the thickness of the jaws such that there isn't enough distance from the jaws to the edge of the blade for you to be able to drop to a lower angle - the jaws actually get in the way. KME get's around this by having smaller/thinner profile jaws and for really tiny knives they have a pen knife jaws set - even smaller and thinner allowing for a better grip on the blade and lower angle not obstructed by the base of the jaws.

Enter the magnetic jaw ... that might get around the "jaws to big to get lower angle with smaller blades" but personally I don't think I could trust a magnetic holder that wasn't some kind of powered electromagnetic kind of thing ... hahaha ... but that might just be me.

Another potential issue would be a blade that isn't just flat from spline to edge and or heel to tip. Flat is easy, but with some funky EDC knife designs there are weird things to deal with over a small distance in the "cool" blade profiles - I'm not sure that these jaws could grab at an angle for example that isn't perpendicular to the jaw attaching point ... if that makes sense without seeing it in my mind ... it's a scary place to go

So, all in all I think this is interesting. Some of what I consider to be issues are easily fixed, rubber between jaws, thinner jaws, more robust attaching jaws (do I get a share in the company if they use my ideas?) If you don't care about anything other than big, beefy, chefs knives it might be decent and especially for someone who can't get beyond the frustrations of holding angles or just doesn't sharpen enough to develop the muscle memory of freehand sharpening or just doesn't want to put in the effort to overcome those issues. Maybe if guided systems are going to be your choice of sharpening systems then you just need to buy a few of them ... KME, Edge Pro, and Sharpworx Professional and accept that there just isn't one that is the end all.

They (SharpWorx) do have a website and a YouTube channel - a bunch of videos to see it in action. There's one where he talks about sharpening at an 11 degree angle and the interesting part is the discussion about angles relative to the device and degrees of freedom. I'm assuming what is being said is true - have not fact checked it. To be clear - I have nothing to do with SharpWorx or KME (ther than having one and liking it very much within it's limitations) but I did think seeing the SharpWorx in action in the videos was interesting.

Whiskey for my men. Beer for my horses.

In terms of just edge sharpening, all guided systems I've seen are a compromise to free hand sharpening. I used a guided system for a number of years.

Just about the only thing guided systems offer over free hand sharpening is precise angle consistency and repeatability. Less tangible benefits are they can inspire confidence while teaching sharpening principles and can be a good alternative for folks with physical challenges.

By comparison, they are cumbersome, take more time to setup, are less portable, and none of the ones I've seen allow for belly/tip adjustments. Without being able to adjust for this, you will alter that portion of your knife over time. It's no different than just sharpening with the blade flat freehand. To do this, the system would have to allow for some float and torsional rotation and that would defeat the locked-in consistency.

Note that you never see these systems in use by the widely respected sharpening houses. They either go freehand or power (usually a combination).

Absolute angle precision is just not that important. Yes, consistency is important but in routine use, you will never notice a one or two degree variation here and there on the blade.

I think statements about any system enabling you to sharpen like the most experienced freehand sharpener or requiring no training are, well, open for discussion at best.
Last edited: Aug 18, 2022

I'd use a guided system for thinning. If the angle can dropped enough.

Ericfg said:
I'd use a guided system for thinning. If the angle can dropped enough.
Click to expand...

It probably could be used to thin a Wustie or Henks.... But not on real knives

I tried to make one of these a while back.
I like that real company trying to .. but I don't think this is the right direction. The single cross shaft is just not stiff enough and the clamp is far too long to be comfortable.
I'd want to participate in pass-around .. if one comes around.
I'm kinda more interested in their sliding gizmo as I think that has more potential.

ninja edit / to expand:
- "single cross shaft is just not stiff enough" - this will mean the angle is not consistent enough as shaft will bend.
- "clamp is far too long to be comfortable." - it'll keep poking your stomach or the wall at the back of your sink.
- "that real company trying to" - I do find great value in these types of systems for both newcomers and not .. I learned true consistency only after I felt what true consistency feels like via the rig I made. .. and then I promptly forgot it because I sharpen once every 6 months.
- "sliding gizmo" - link
Last edited: Aug 31, 2022
B

that arm is cantilevered? so a person would still need to not ham-fist the thing.

now if you bridge the back side to lock it in and make it bigger to give you working room..boom. perfect angles. either way, i would give it a go.

Here's another neat one, kinda puts things on it's .. side (ahem)

The smartest sharpening solution for all your knives. Tumbler sharpens and hones your dull blades in minutes. A magnetic holder with 15° and 20° degree creates a perfect cutting angle and with the diamond disc you get the very best ground sharpening. To get an even sharper edge, the stainless... 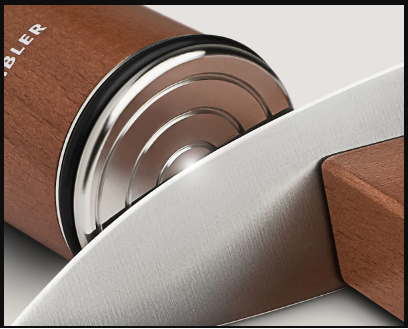 I think if I was going to use a guided system I would rather have something like this than the traditional lansky/kme style ones.

Partially because I already have a bunch of stones.

Whiskey for my men. Beer for my horses.

I think the sponsor hasn't logged on since Aug 17th, the day they posted this thread.