So I recently finished my quest for the five major hitachi Carbon steels with a 180mm blue 2 Hakata by Tsubaki a couple weeks ago, and so far it’s been a major disappointment!

First, the spine...
Since the spine is not flat, but has a parabolic slope upwards before it aggressively dips down for the kiritsuke style tip, it makes pushing ingredients across the cutting board impossible. There’s no flat part on the board to push ingredients with. When I first tried it I couldn’t believe how short sighted I was when I purchased it. I was so mad at myself because it’s such a glaring design flaw: not only does the Hakata have a stupid design, IT MAKES ME FEEL STUPID FOR BUYING IT!

Second problem with the Hakata is the profile. I thought it was going to be mostly flat. It is a very flat profile, but not like a Nakiri, it has to large flat spots with kinda a sudden little curve about an inch up from the pinch grip. So it’s like either chop under ur pinch, or angle your pushes aggressively towards the delicate tip. It’s just hard to get a feel for it, and is hard to get into a groove.
-this might only be a Tsubaki thing, or on my particular knife.

Anyone own a Hakata and actually like it? For me, it’s just on my knife magnet taunting me for being such an idiot buying this thing. Maybe after a couple sharpening sessions I’ll get it to a point where it’s more comfortable, but every time I use it i say screw it halfway thru and grab a different knife
Q

I don't have one myself, but here's some footage of how to use them. It's essentially nakiri technique and deba technique.

Oh wow, I did feel like it could do some deba tasks well. That’s part of the reason why I wanted it but never saw it in use.

When I purchased it I kinda thought of it more as a flat bunka, kinda a k tip flat santoku, which appealed to me, but this really helps me look at it in a new light
G

I like the shape as a general purpose knife. The two issues I had with mine (also Tsubaki) were a wonky grind that I made worse before figuring out how to mostly fix it, and the tip being very susceptible to breaking off (sort of inherent to k-tip knives).
D

Possibly a silly suggestion... What about using the back of the k-tip (opposite end to the handle) to push ingredients with?
S

Dull_Apex said:
Possibly a silly suggestion... What about using the back of the k-tip (opposite end to the handle) to push ingredients with?
Click to expand...

Not silly at all, I do this a lot. Trouble is, read @GorillaGrunt ’s post, the tip seems SUPER fragile. Like more fragile than other k-tips I have. Also it’s less of a natural motion for me as I’ve been pushing ingredients with the spine of the knife for twenty years.

Gorilla Grunt, what’s the edge profile like on yours? Does it have a weird bend like 2 1/2 inches from the heel? Or is it completely flat ?
S

Qapla' said:
I don't have one myself, but here's some footage of how to use them. It's essentially nakiri technique and deba technique.

After watching these again I used it again. I essentially used the last three inches of the blade, and you have to hold it at kinda a slight angle to make it parallel with the board.

Uses the middle of the edge is for the most part ineffective as the profile of the place makes it feel unnatural. But using it towards the tip helps a lot... the issue is that tip. I use a hinoki board, and even though it’s a super soft surface, the Tsubaki tip never feels safe.

I guess it’s be worth a try from another maker. Hinoura and Yoshikane have their own versions. The reason I went with Tsubaki over them is they only offer them in White Steel #2 and I wanted a Blue #2 knife to round out my roster.

Regardless they all have that upwards curve in the spine, which is SUPER ANNOYING. I feel like it’s just to make it aesthetically pleasing, but would actually be better if it were just flat, and the spine was not parallel with the edge. It would still give the extra tall K-tip but allow you to push ingredients with the knife.
G

It’s at work right now but I think it does have that bend, 2.5 inches sounds further back than mine has the kink though. It doesn’t seem to make a difference, I use it almost nakiri style on the board. Its definitely not close to the original profile though- I ground off about 5mm of height. I’ve got a thread somewhere on here asking for help and detailing the troubleshooting process. As I recall I threw some shade at the maker and the vendor but though it definitely had some quality issues and needed some work, I also went at it hard when I knew even less about knives than I do now and made it a longer and clumsier process than it needed to be.
S

For those of u who don’t know what I’m talking about. I took pics: 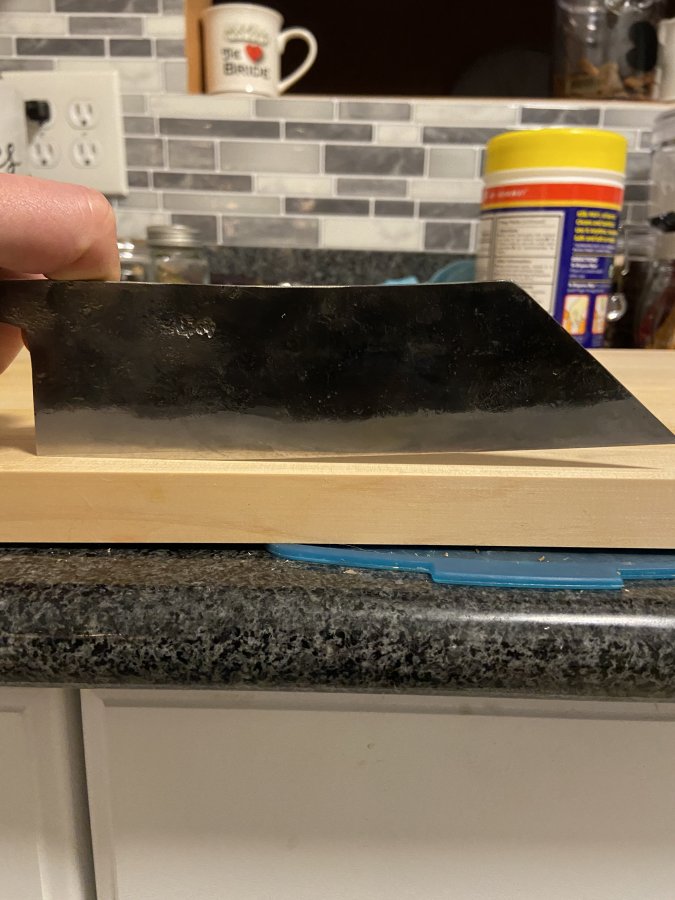 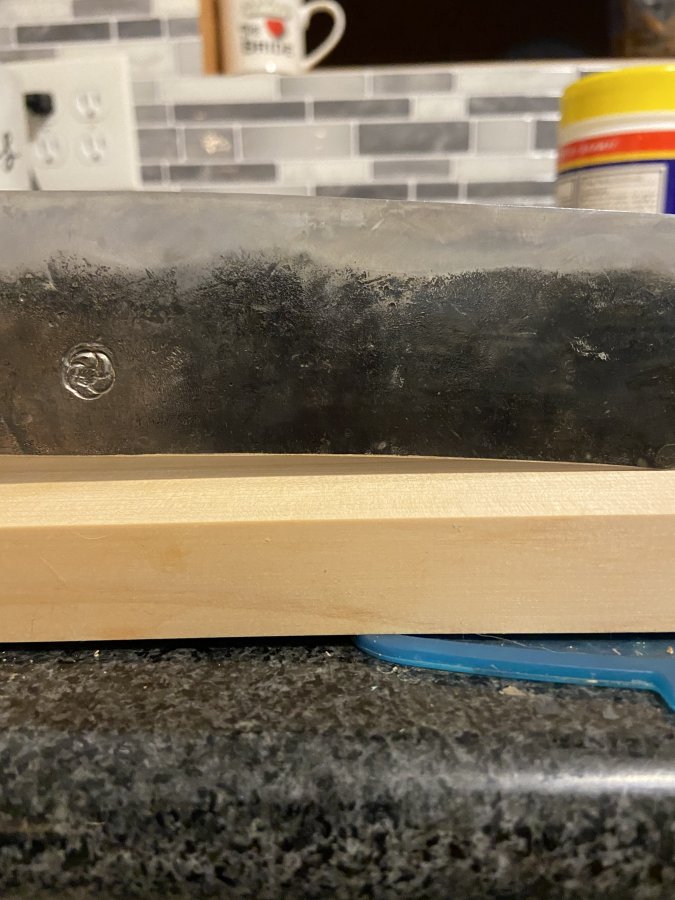