it's a good thing Shun quit their free sharpening

a friend of mine sent me some knives to sharpen, since he can't send them back to Shun again. holy crap. there is 10 years+ of normal use and sharpening removed from some of them, and they all have an erratic curve from heel to tip, with no straight spots at all. they look like they were nibbled, instead of normal grinding, so i'm guessing that some kind of electric knife mangler was used. it's the kind of thing that really needs a belt grinder to fix in any kind of reasonable time frame, i think, so i'm going to suggest he send them to Dave, as i don't have time to fix them by hand.

i had never seen the Shun resharpening and while i would never expect them to be great, i was shocked. i figured they would at least get them close to the factory edge, which isn't completely worthless. i'm not even going to talk about the "refinishing" that was done to the flats of the blades, other than to say it makes me feel very good about my own refinishing work.

the edges have also been made very thick due to the way the resharpening was done, which makes it even worse. really bad work.

ah. i hope they do a better job than what i saw today. funny enough, my friend thought they were pretty good when he got them back. i don't know how you can use a chef's knife with no flat spot though (sure, Shun's are complained about for having too much belly, but they do have a perfectly usable flat spot).

fortunately, one of the knives he sent me was a carbon Nakiri that had belonged to his aunt (he's of Japanese extraction and his aunt is Japanese), and that knife sharpened up beautifully and cuts as well as my Shig, now. at least he'll have one sharp knife.

I stand corrected, it is Perfect Edge but not just the main headquarters in CA, they have other places now I guess as well.

i wonder if they started contracting to other companies due to it costing too much to sharpen the knives themselves (i can't imagine it would, if they were using an electric knife mangler for everything), or if they were getting too many complaints of ruined knives and thus having to replace blades.

Actually I've seen a lot of knives sharpened by Shun themselves and the worst I can say is that they're just never really that sharp. I've never seen that sort of knife mangling you've described. Maybe they already switched over to the new service?

heh, maybe. the knives don't look that terrible at first blush, but they are ****** up. i could tell as soon as i took the chef's knife to the first stone, that something was badly awry. i've owned all the types of knives he sent (and still own two, the classic parer and 6 inch utility) and they don't compare to the original geometry at all. i could put a keen edge on the things, sure, they aren't that bad, but they aren't good and won't cut right without work beyond what i have time for. i also don't like doing a great deal of work with the Beston 500, as i end up having to do a lot of cosmetic work, afterwards. that's not a big deal with a single bevel, where you have to grind those areas anyway, but with a double bevel...

This is the machine used by Perfect Edge. 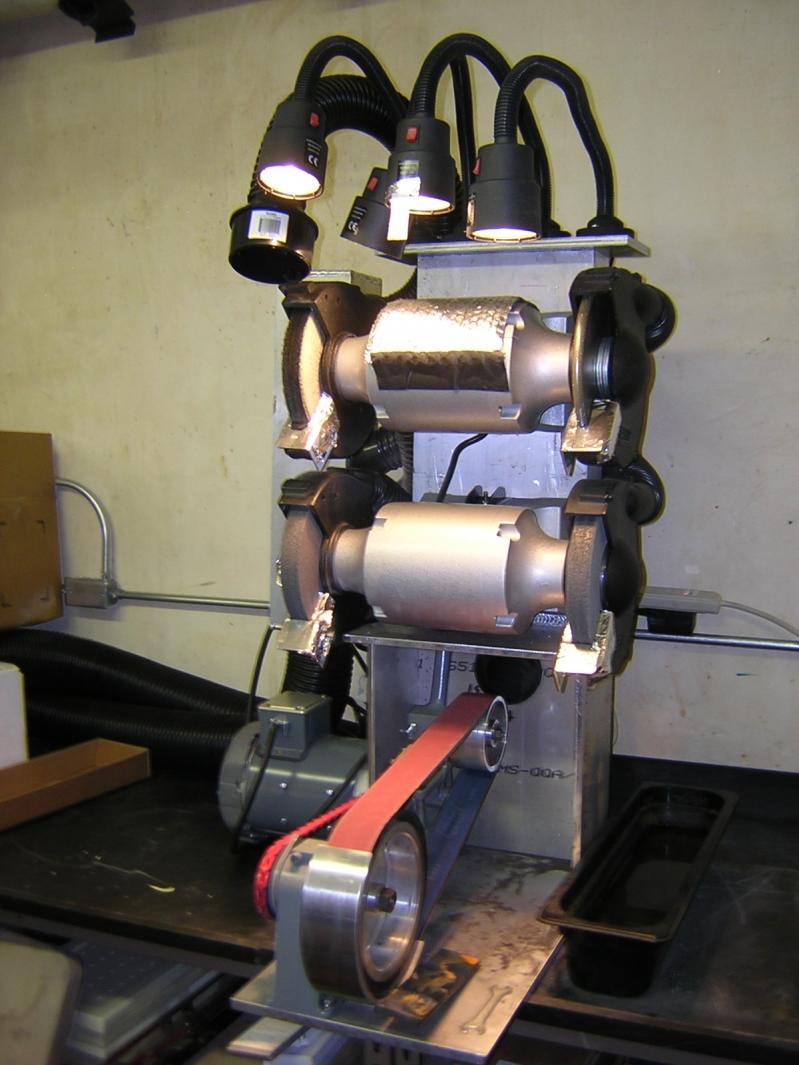 you know, as much as i love my water stones, i bet i could use that in my basement.

EdipisReks said:
you know, as much as i love my water stones, i bet i could use that in my basement.
Click to expand...

I have some of that stuff.
L

Me too! Waterstones AND a basement!

Lefty said:
Me too! Waterstones AND a basement!
Click to expand...

Boy, a person could really do some damage FAST with that setup!

SpikeC said:
Boy, a person could really do some damage FAST with that setup!
Click to expand...

Last I heard they were having contact wheels for the grinder cut down from forklift tires because the high durometer rating of these tires helped to keep the belts on the machine at the speeds that they grind at. I distinctly remember thinking that must be real fast because even at the highest setting I've never thrown a belt and I have the same grinder.

Come on, we are dying for some pictures.

As they say, "Pics or it didn't happen"