Instead of making many more different threads, I'll just post new findings in a single one.

A
hand-made forging knife craftsman known to Sanjo, Niigata Prefecture, a town of cutlery, Shuji Toyama
is a Yanagi knife that is manufactured by integrated production at a smithy with a focus on hand-forging.

As some of you may know,
Shuji Toyama
made kitchen knives as the first Shuji Honjoji at the top brand Tadafusa about 30 years ago, and
became independent as Shuji Toyama when he reached retirement age. bottom.

After independence, Tokyu Hands approached Shuji Toyama to open a booth, but he was so obsessed with the story that he
refused because he was concerned that the number of production would increase and quality could not be maintained.

The work with the ultimate in essence has become a highly acclaimed gem both domestically and internationally, and if you look at Instagram etc., you can see posts that foreign kitchen knives enthusiasts like to use.

He is a very enthusiastic craftsman, and
recently he is old, so the number of production is small, and
now he only wholesales to the companies with whom he has been associated for a long time.
Especially for Honyaki knives, they are very valuable because they are rarely made even at the request of an acquaintance.
I have never seen anyone other than me selling at online auctions.

This time it will be exhibited without
a pattern, so please enjoy it with your favorite pattern.
In addition,
we have been running a kitchen knife sharpener in Niigata prefecture for 25 years . If you wish, you can also attach a handle, so please contact us.

Finally, please enjoy the uncompromising work of the kitchen knife craftsman, from blade cutting to polishing and every detail. "

Around the Buddha sculpture:
Natural whetstone and its properties

History and geology of Gunma whetstones (numata comes from here).

This site also has a paper on watetsu, or japanese iron, and why it's resistant to rust (formation of stable oxide film)

Whetstones in the literature-Whetstones used to polish medical devices

80 pgs long with pictures, and info on steel properties

Theres one for the upstairs, and one for downstairs
scroll down for the downstairs

The downstairs one has him forging a honyaki, so that's neat. . . at least I think it's a honyaki

links to other stone and knife blogs. interview with yukinori shirataka, who forged nails for temples
Last edited: Oct 5, 2021
R

aizu shigenobu is last knife he shows. . . all before them are shigefusa
Y

i would die for an aizu shigenobu
R

maple-farms.co.jp
Hiroshi ashi factory tour . . .multipart is in other posts on the site
R

Got a shigenobu ajikiri clad knife . . . Kurouchi finish with only two stamps in the back, shige and nobu. Steel feels like TF white 1 but harder, lower in carbon, slightly better edge taking, and slightly better toughness. I accidentally snapped the tip. . . Very milky looking and smooth without looking glassy too. Catches onto hair like tf but cuts a bit more mercilessly. 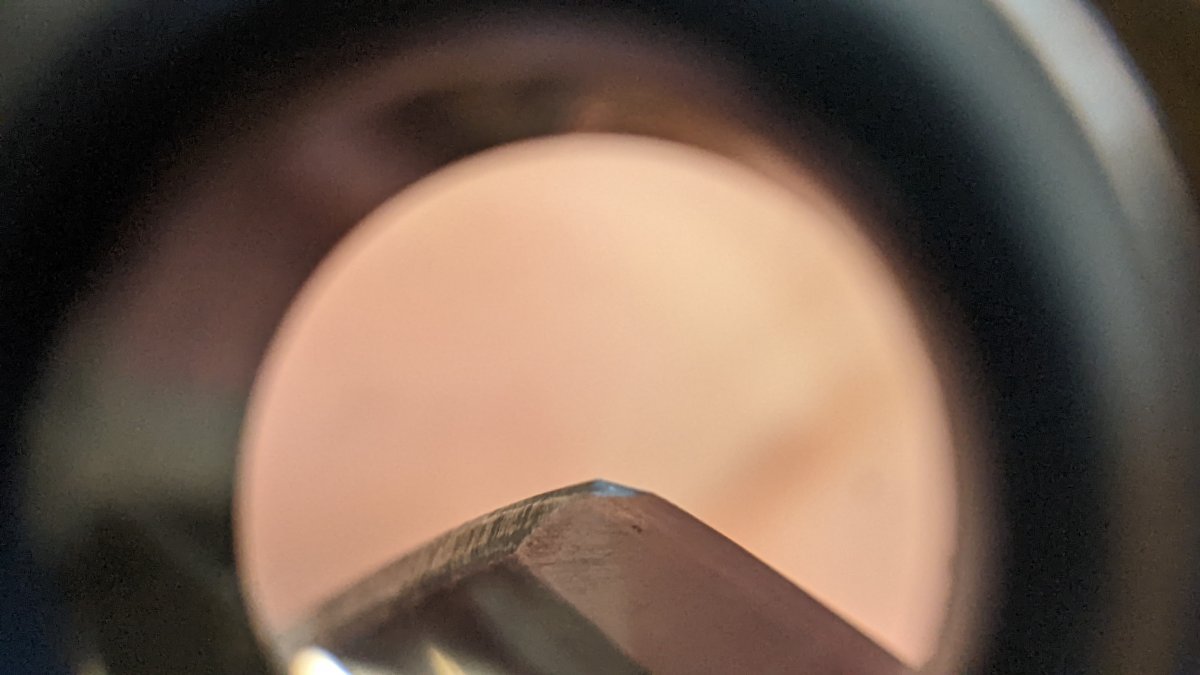 
Mr. Hideaki who had been trained the family business by the first father and Kiyojiro Yamamoto from the junior high school age polished the arm under uncle Masakazu Ueda, and stood alone at the age of 25. As a result, "I want to go up as long as I do it, I always tried to do top work", and many skilled chefs have come to use "English" kitchen knives. Its aspirations and brand power are

Translated from Japanese by microsoft

The article also mentions Jon broida at the end, haha

Not web info, but a review. Takahashi Kajiya grinds and fit and finish are the least consistent out of anything I've ever had. I believe he doesn't have a regular waterwheel . . . I think he has a tiny retail sized one. There is a Google arts page online about it. Supposedly he hand forges everything without a power hammer, but he does have one in the shop

White 2 steel. Feels like white 1 though. Coarser diamond stones can cause the edge to crumble. Reground mine and still need to finish it completely. Expect a ridiculously narrow or short tang that doesn't fit regular Japanese handles. I say ridiculous because it makes fitting on a handle a good bit more troublesome. Mine had a mild reverse distal taper from handle to tip. The tang was barely the thickest part. . . Spine was also too thin . . . Like 1.5mm and shinogi area was like 3mm before I thinned it to around 2.3mm. Well, I say too thin, because I'd prefer a thicker spine if closer to the edge it was thinner. The handle was also loosened easily because of the tang.

On par with top smiths steel wise though for white . . . .took me a while to conclude that because I needed to regrind it.

So think TF wabi sabi but x 4. TF had a fairly even blade road. Takahashi did not. . . Like a deep gouging overgrind at some parts. . . Which is not good, but I've done that before on a waterwheel, so I know how easy that is to do. But the Takahashi had the heel set up to use a bit like a deba, so idk. Some rural smiths do that.

There are tiny pinprick delamination spots on mine which I was actually looking for because I wanted to see if there was indeed a correlation between this and steel, and there kinda is. . . .maybe. They could have also just not been as thorough to remove all the oxide bits from the weld. There is weird crystaling on the hard steel very very much like a good honyaki or tamahagane, having handled both. . . So if youre a metal polisher that might be cool for you. . . It's distinct crystals of hard and soft steel exactly like when I've seen Japanese Swords. Steel feels crispier than tf white 1. More honyaki like feedback in my opinion. 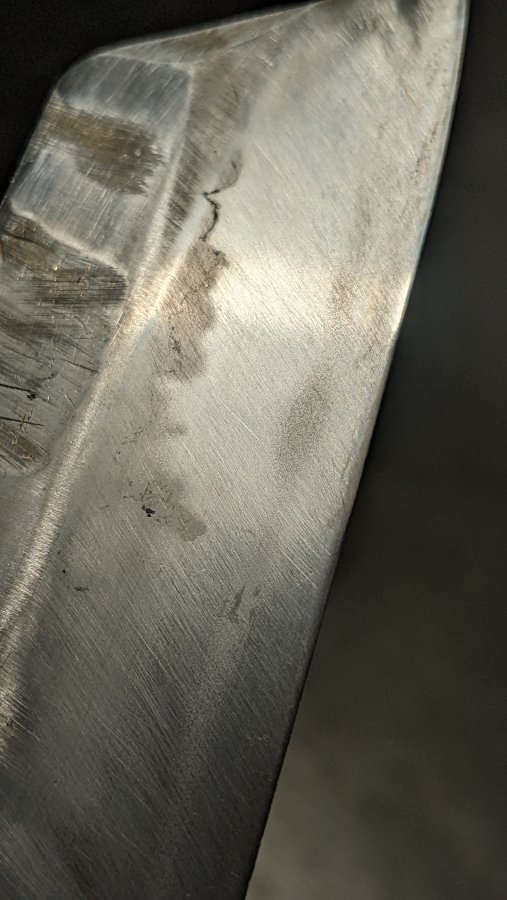 You’re being generous here - mine looked like it was ground by a toddler. I’m confident I could have done better in my first go on a water wheel… blindfolded. Comparing this to TF is wholly unfair to the TF. The state I got mine in was utterly unusable. There was a 2mm hole in the edge and multiple smaller overgrinds that needed fixing. In a couple spots I got these absolutely wild floppy foil edges where I think the edge got cooked during grinding. In other areas I has a similar experience where anything coarser than a 500 grit stone at <20* chipped out the edge. I also have the reverse distal taper and a useless tang - gonna need lots and lots of epoxy to mount that bad boy up.

I’ve gotten a decent, though thiccc, slicer out of mine now that I’ve worked through all the crud. The steel (and iron cladding for that matter) is some of the harder Shirogami I’ve felt. If I end up keeping it, it’ll be because it is so damn fun to polish. There is wild carbon migration like you see on the Kono vintage carbons, a sporadic haze in the core that reminds me of tamahagane, some fun super-bright crystalline structures, and banding in the iron if you take it fine enough. Still working through my polish on this one and find it to be a pretty ideal stone tester as different levels of refinement bring highlight different effects.
R