How to remove a sharpening stone from a plastic base

Primary inspiration - thanks @Michi. I removed both a Suehiro (Cerax/Ouka) flat white plastic base and a Rika wooden base this way. Not all ovens are the same which is the most uncertain part of the whole procedure. I'd say just some gradual low oven heat - 5 minutes and prying and put back raising the temp 25*F - until the corners lift easily then put back for another 5-10 mins at that temp and then finish the job.

My hidden bake element electric oven needs about 200-225*F to be efficient, but I usually start with the Keep Warm function (170*F) and see what happens after 5-10 mins.


How To Naniwa Chosera Base removal

Never did that, nor had a Chosera base to remove. Just follow @da_mich* instructions since they're obviously pretty much fail safe and no heat. And I'd say you can confidently do something of the same with the Kitayama or Suehiros if unsure about what I'll post next. I'm unsure myself if it's glue or epoxy still for the Kit but I'll keep with my method since it's so much simpler and fast than having to go to a clamp you might not have. I also don't think there's much need of sawing off the ends of the base as long as it's not restricting access to wedge a knife there.

- Oven
- Pair of oven mits - there's no not wearing them at any point but when the stone is still in the oven
- Beater knife - preferably 7-8" and full tang design. I really wouldn't use say a Victo Fibrox for example. 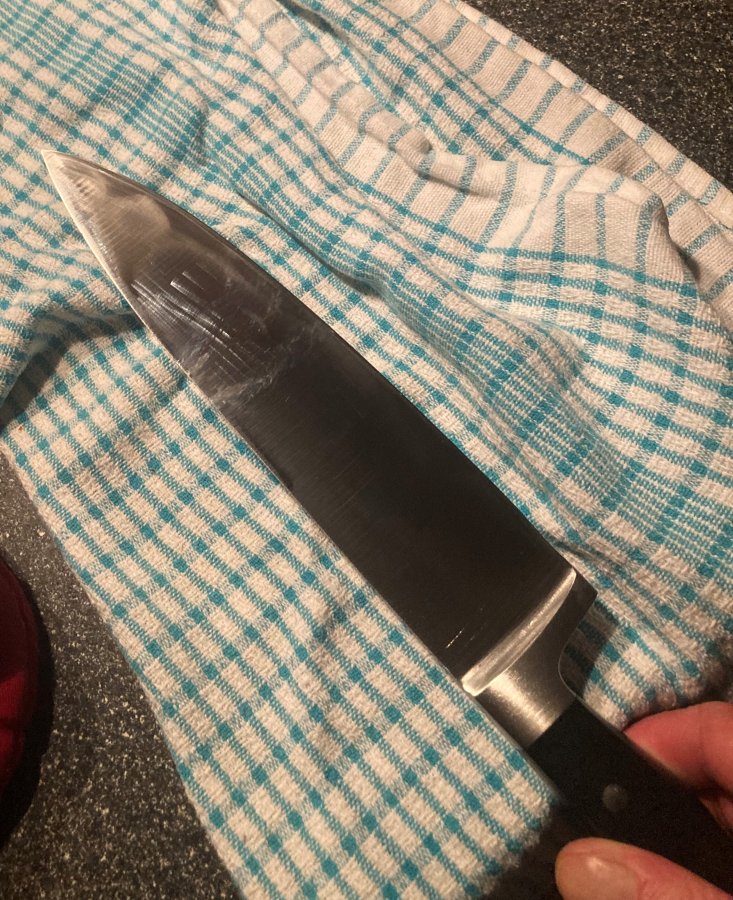 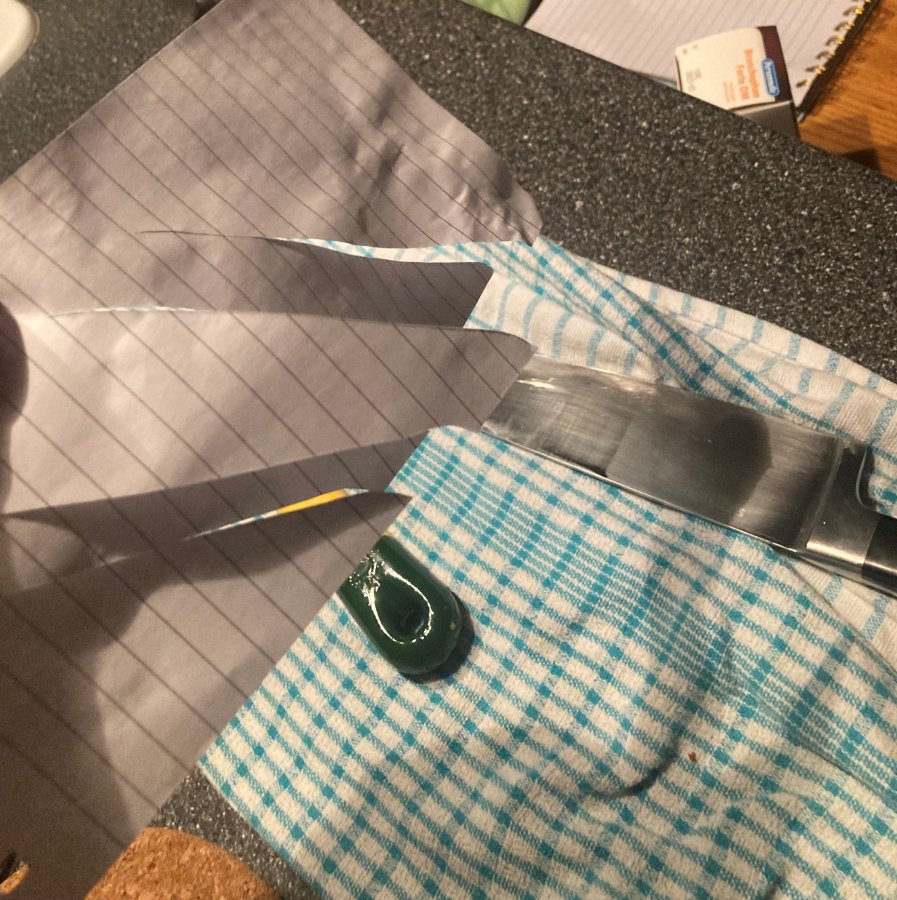 Got scratches but no effect on the edge so much, would still cut paper readily...

- Cork mat (or something a bit soft and sticky you can prop the base vertically on so that it doesn't move or slip AT ALL when you apply downward/slightly lateral pressure)
- Pan/baking sheet (facultative) (I'm pretty sure you can put the thing in the oven directly, and pretty sure no glue/epoxy will seep down into your oven, but a cheap baking sheet is like 5$ so who'd rather not use one IDK?)
- Some Balls & Logic - it's really easy and not dangerous, if you ask me. Right oven temp is probably the most unpredictable part, so don't give up until hitting 250*F which from my experience is still safe for the stone.

- Preheat oven to lowest temp you've got.
- Let the stone sit there for 5-10 mins, then check and raise temp if nothing much happens.
- When corners are clearly showing a wider gap, prop the base vertically onto the cork mat, slowly insert/wedge the knife at the one up end in between the stone and base (duh!). Firmly wedge/pry down and when it stops it's enough don't force it down further. Rather go at it from the other end now.

*The TRICK is to: use the palm of one hand to push at the tip on one side, palm of the other hand to push at the heel on the other side; use the thumbs to secure/press the base downward so that it's steady; use the remaining fingers to cove the stone side (NOT the base side) so that if you go through in the end somewhat more brusquely, the base will fall off, and the stone will still be securely standing up in your grip, NOT the other way around)

*If you can't go completely through with firm but relaxed strength when reaching the center from either end, put back in the oven for a couple more minutes, try again. Rise temp another 25*F if there's still room until 250 if the second attempt still doesn't work well. Or keep the same temperature and be patient through a couple more trials. I prefer quickly raising temp to be done within a few trials than subjecting the stone to heat and room temperature cycle like 20 times in a row to save 25-50*F of heating. YB&LMV...

- Use very coarse sandpaper dry and just rub at the glue/epoxy patch left on the stone so that the bulk is taken out. Then do a complete surface rub with a larger piece of slightly finer coarse sandpaper - might help to buy some in 9x11 size with soft backing and wet it a bit so that it sticks to a flat surface like countertop and you can rub the stone on it with circular motion. Atoma/proper dressing stone/Nagura can do the rest of a finishing/resurfacing job there, but when the glue is all out and the stone flat there, I use a permanent marker to mark it as underside and never care about resurfacing THAT anymore. Besides getting the oven temp right, getting the patch of glue out is the real, real, real PITA.

*I don't know if the Kitayama is soft epoxy or glue. Looked about the same as Suehiro reported to be glue; smelled noticeably stronger though. Was much harder to separate (needing the knife), but probably mostly because the Kit wooden base is a full flat surface, compared to the Rika wooden base being basically like a waffle, with the gluing just happening at the ridges. 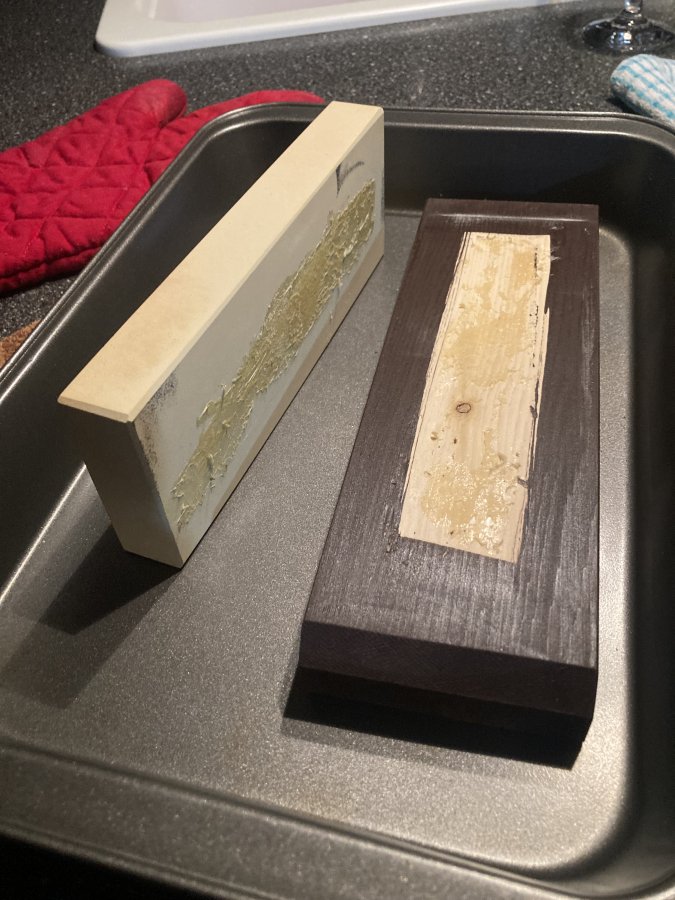 The better question is, why remove them from their bases in the first place?

I actually wished my Naniwas came with a base... At least if it eventually starts showing spidercracks there's far less of a chance of the stone cracking, and when a stone is on a base you can use it pretty much until the last milimeter. If you want full longevity from a baseless stone you'll eventually have to slap a base on it anyway.

Pretty obvious though why many do: it’s preventing them stones to fit with the setup we use.

I almost made the argument within the post but didn't think it needed explaining by now… They should make a base that’s fitted to the stone exactly, IF for improved longevity. Cheapest material that's rigid enough and relatively heavy could do. Particularly interesting being that the brands that propose these crappy bases are brands that also sell stone holders and other various related gizmos.

On top of which, most of these do not have any kind of stability, making the proposition of helping folks without a setup a moot point. I mean, the Cerax plastic plate, to use with a very crappy base doubling as stone cover for storage is completely stupid - as much as for stability, preventing a thin stone to crack (plastic is thin and flexy as hell), or even be useful in storage.

Moreover it's been argued in some cases that the base prevented stones to dry evenly, which for the Chosera was a problem.

The wooden base the Rika had seemed to answer to that: 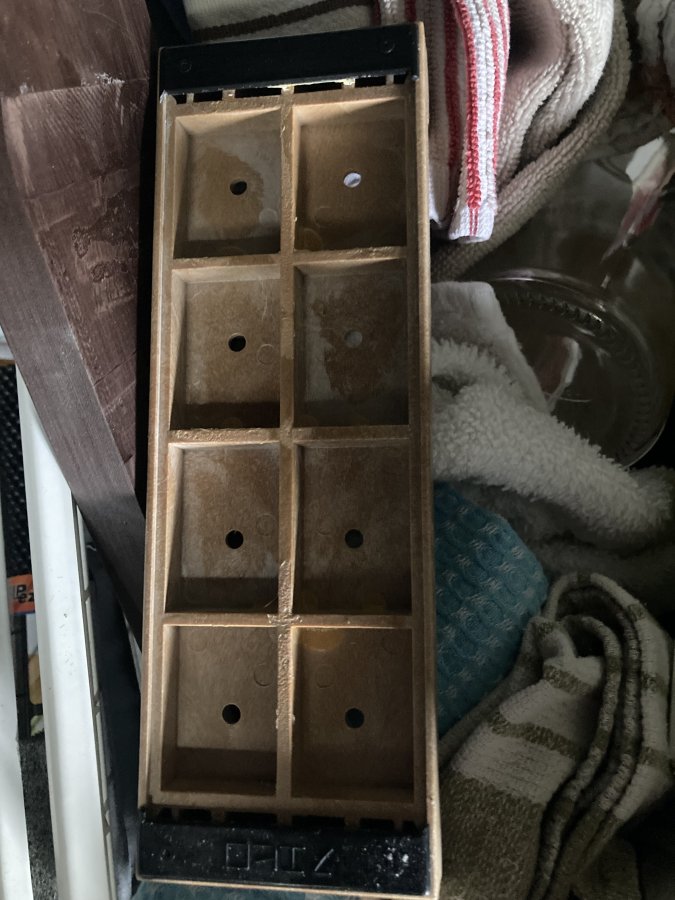 However, I wonder how much this will help to prevent a stone cracking when getting to it's last couple mm. I'm sort of thinking that it will rather ensure the stone will break, if anything. So no good answer in the end, especially where it made that base unusable since lightweight and hollow to a ridiculous extent.

Kitayama base seems to be the same than Chosera, or so. It makes a bit more sense in terms of some stability and supporting the stone when it'll get thin, but it's still crappy material that's too lightweight to provide real stability.

That's not mentioning my other main quibble with these PoS: when the stone actually gets on the thinner side, using the stone low angle (like in thinning or polishing) is all that more likely to either have you knock them bases with your knuckles, or with the sorry arse western handles with half/full bolsters.

I mean, there isn't ANY one reason that makes these things desirable on stones.

As a side note, and not that I care about what they say, but on Vendor Who Must Not Be Named, they actually warn that where they used to sell the Kit with the base, a forum poll had it out that a crushing 10:1 users preferred stones without bases. 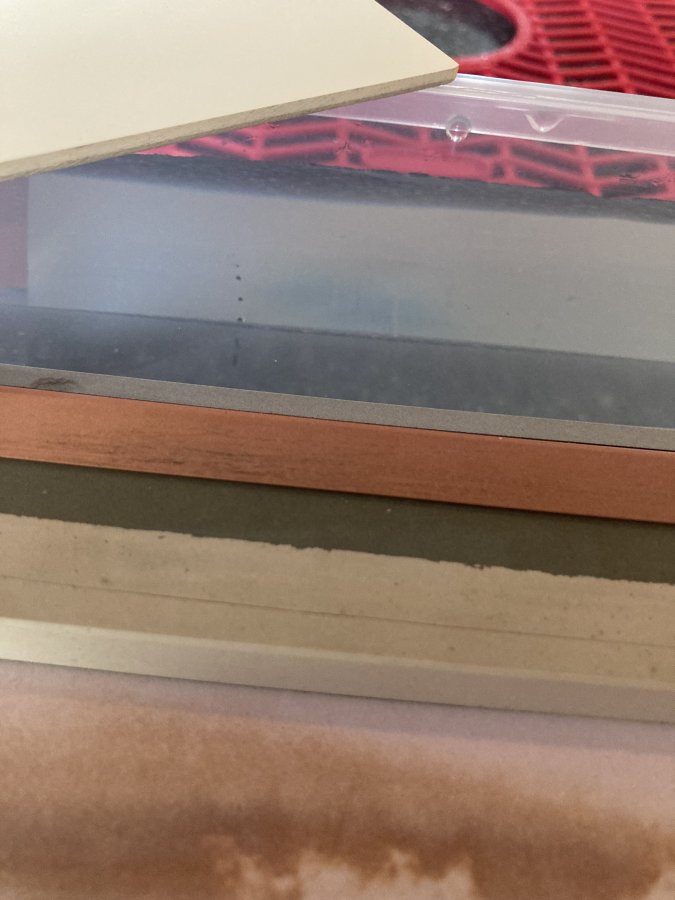 Old Ouka is down to it's last 2mm, Cerax 320 down to three or four. Ouka particularly feels like it's going to break just taking it in my hand. Yet still resists full polishing sessions and sharpening sessions and getting flat with the Atoma, without me ever even taking precautions in my use or being any more particularly gentle with them at any point of their handling.

Nanohone has the right idea…. Not the close system which I can’t for the life of me GAFA, but the plate being a bit longer that the stone (which with a stone holder ensures you don’t clamp and pressure the stone itself) but no wider. It’s like they realized protruding sides wouldn’t cut it in last mm use.

However outside their setup makes the stone slippy. 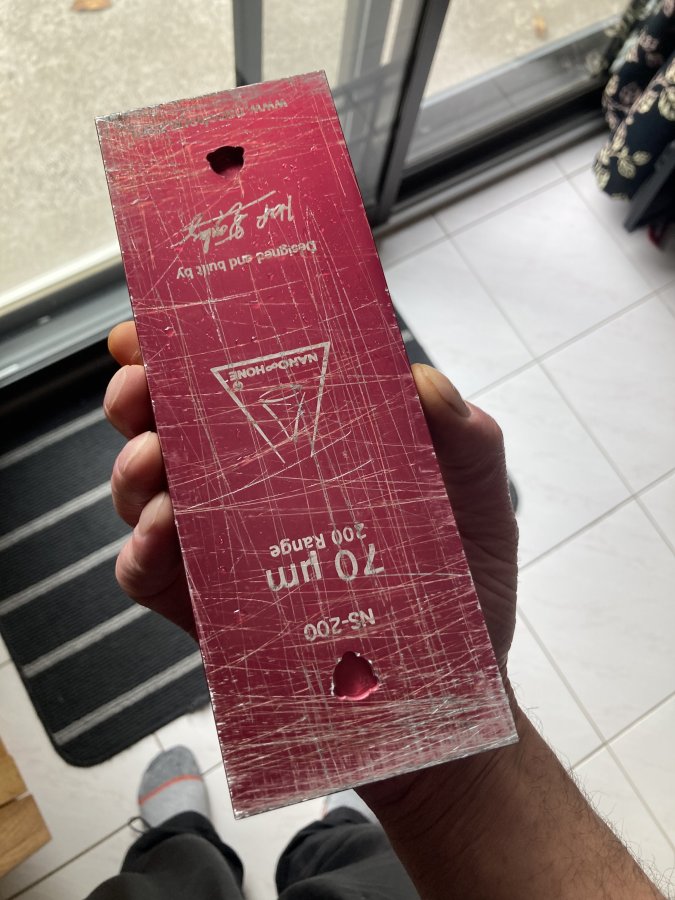 Did I stop to consider one second before I took mine outside today and made a real uncaring job of unbuffing that plate? Nope because first use was a nightmare because of it. So just the same all those bases I had were off before first use. Can’t mess with a guy’s setup.

ModRQC said:
I almost made the argument within the post but didn't think it needed explaining by now… They should make a base that’s fitted to the stone exactly, IF for improved longevity.
Click to expand...

Isn't that what the Shapton glass stones do?

On top of which, most of these do not have any kind of stability, making the proposition of helping folks without a setup a moot point. I mean, the Cerax plastic plate, to use with a very crappy base doubling as stone cover for storage is completely stupid - as much as for stability, preventing a thin stone to crack (plastic is thin and flexy as hell), or even be useful in storage.
Click to expand...

Maybe I'm just not very demanding but I never had any issues using stones on the base that came with them. Feels a bit backwards to knock the base off only to then put it in a stone holder.

Moreover it's been argued in some cases that the base prevented stones to dry evenly, which for the Chosera was a problem.
Click to expand...

Errm... the recommended solution for Chosera stones that get crazing or spidercracks is to mount them on a base. I wonder if this is even a problem that occurs at all on the originals with a base on them.

I mean, there isn't ANY one reason that makes these things desirable on stones.
Click to expand...

Apart from not requiring a seperate stone holder, not having to take stones in and out of stone holders when switching stones, providing rigidity that allows you to use stones to the last minute, and preventing cracking and other nasty business? What have the Romans ever done for us.
If you dig around through older threads the solution to many stone problems that comes up the most is to epoxy them to a base. Why not get it with a base in the first place then if that's the likely end situation anyway and save yourself the trouble.

As a side note, and not that I care about what they say, but on Vendor Who Must Not Be Named, they actually warn that where they used to sell the Kit with the base, a forum poll had it out that a crushing 10:1 users preferred stones without bases.
Click to expand...

The majority isn't always right. I also got most of my Naniwa Pros without a base becaase that was what all the cool kid did at the time, but at this point I really regret it, especially when it comes to the 5000 stone.
If I was buying new stones today I'd prefer them with a base.
You must log in or register to reply here.
Share:
Facebook Twitter Reddit Pinterest Tumblr WhatsApp Email Link