Like many others, I often find myself trying to learn the differences and similarities between knife steels. There are some great resources for all the details (e.g., Zknives), but there are so many steels to sort through and so many elements that can vary, sometimes very slightly. That got me thinking about making one or two graphics to summarize the common knife steels. Here I present a first attempt using statistical method called principal components analysis.

The main plot below shows the various common kitchen knife steels as black labels positioned along an x-axis (PC1) and y-axis (PC2). Steels that are close to each other on the plot are more similar in elemental composition, and those that are far apart are more different. The boxes to the right are my attempt to zoom in on some cluttered spots where the steels are so similar in this analysis that their labels overlap on the plot. The red labels represent the elements and the direction of the arrow points in the direction of increasing amounts of that element. So the long red arrow pointing left to Cr (chromium) means that steels towards the left side of the graph have high Cr content - in other words, they are stainless. In fact, as you move from left to right on the x-axis, you basically go from stainless to semi-stainless to carbon steel. Similarly, V, Mo, Co and W increase as you go down (approximately), as shown by their red arrows. 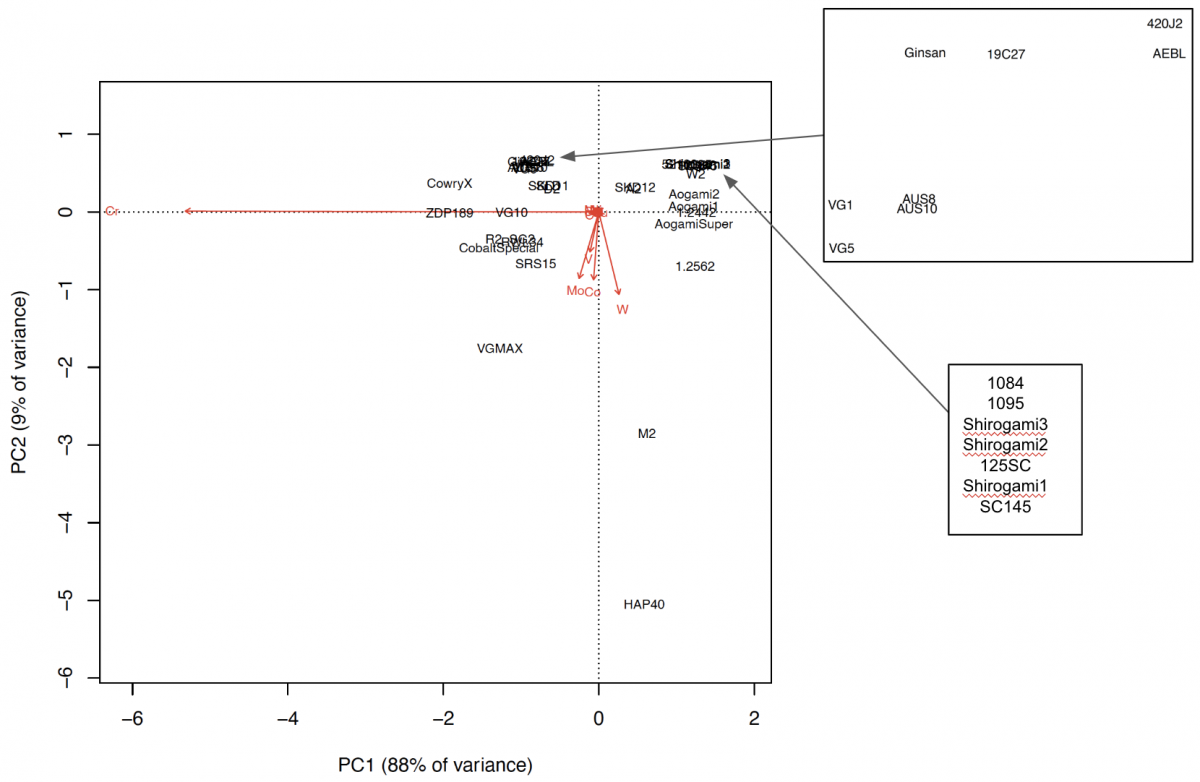 I also made a similar plot for only the popular Hitachi carbon steels, since they are so cluttered above. You can see that the Aogami (blue) steels are especially higher in W (tungsten) but also a little in other elements. Aogami Super, Aogami 1 and Shirogami 1 have slightly higher carbon than the others (follow the red arrow for C). 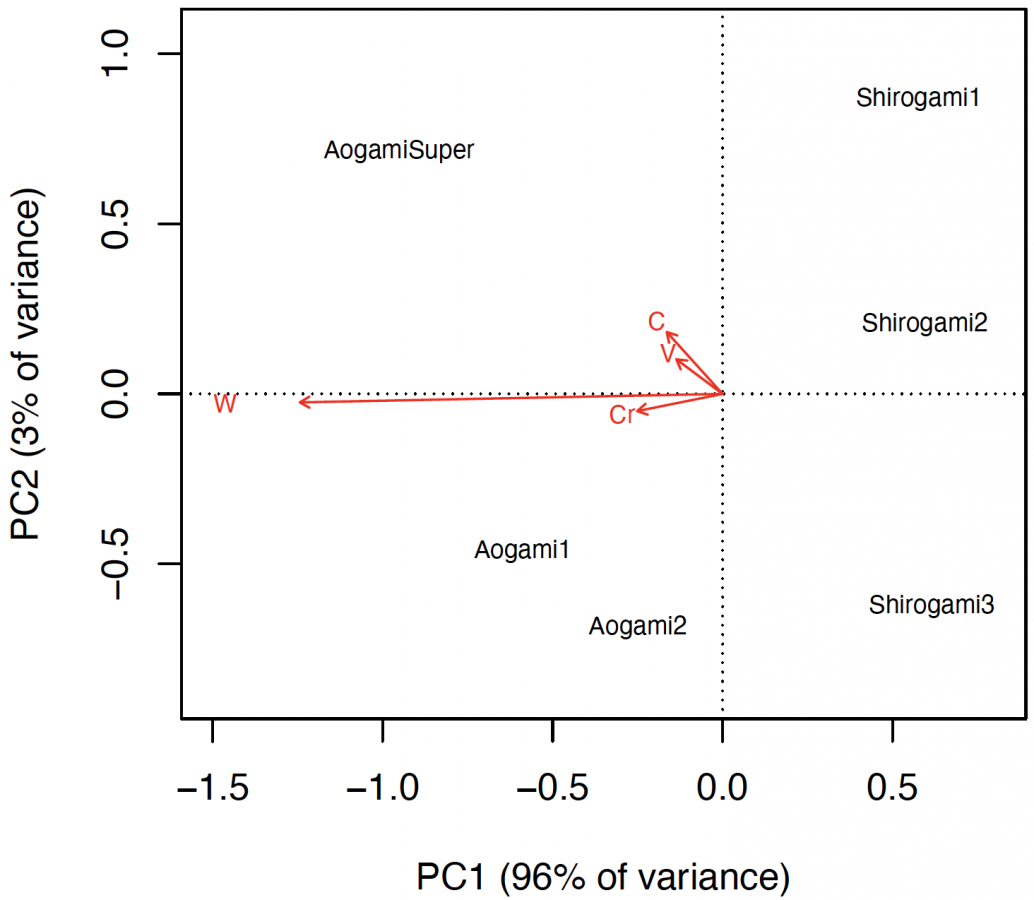 I should mention that the above plots treat the more abundant and variable elements such as Cr as more "important" than the less abundant and less variable elements such as C. For example, Cr varies from 0% to 20% of these steels and C only varies from 0.25% to 3%. You might say that is not fair because C (or any given element) is very important and even little changes can matter a lot. So, another way to analyze the steel composition data is to first standardize the data so that each element contributes equally to the outcome regardless of whether or not it is more abundant overall. Here is that plot: 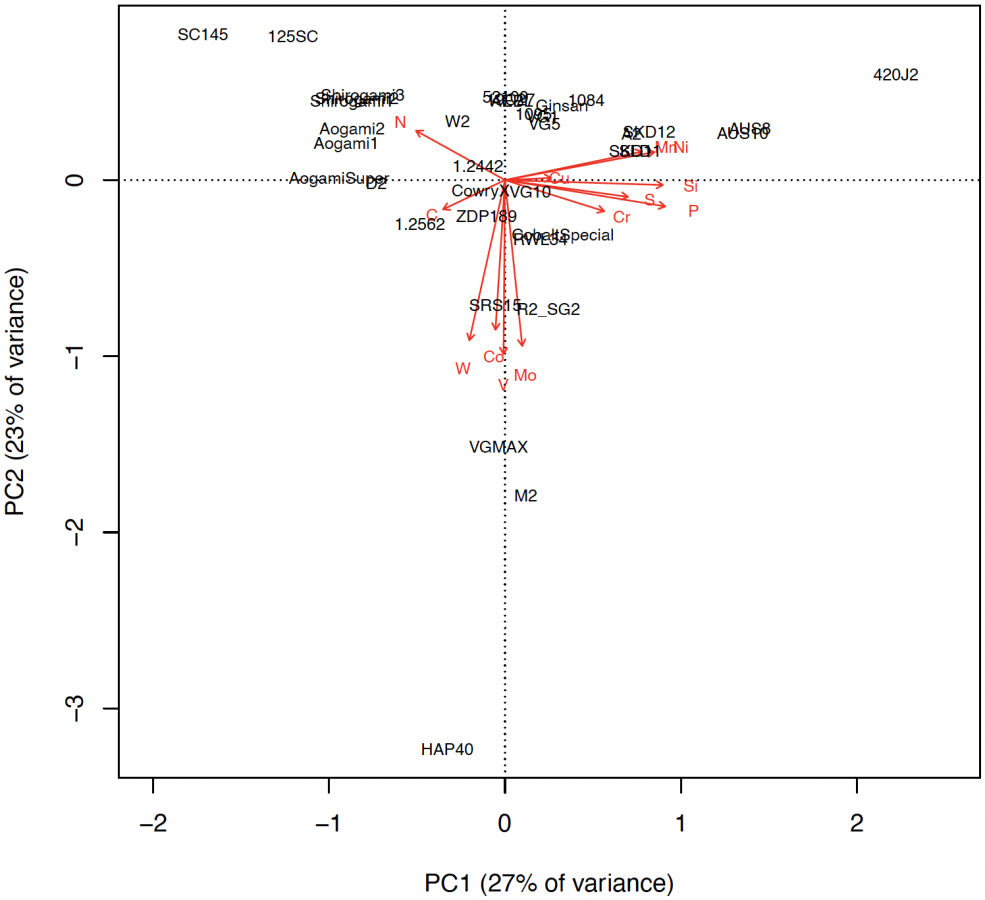 One drawback of this version of the plot is that the two axes shown do not account for as much of the variation in steel types as the first plot. We would need a three-dimensional (or more) plot to really capture all the differences, which is not easy to look at.

Let me know what you all think. I may try to make these nicer if I have more time in the future. There are also probably ways to make an interactive (3D) plot where you can learn the composition by hovering over the points...