Knives that make you go WHOA from the first cut!!

BillHanna said:
My son had that at my MIL’s apt. I smiled died inside.
Click to expand...

Kei kobayashi 210 gyuto as it was my first laser.

Yoshi skd 240 nashiji gyuto still wow me everytime, although I don’t use it much often.

He told her her knife was terrible. Asked me to go home and get his knife.

Kashima Sanjo Gyuto 21cm.
One of the first I bought at Cleancut. Almost never uses it but get always surprised how sharp it is...

Heiji Ikasaki 150mm semi-stainless.
It has a dry feeling cutting with it.

TF Denka ootb was the most whoa double bevel Ive tried. Takeda bunka was quite whoa as well, for different reasons.

Most recent and strongest whoa was a Togashi 300mm yanagiba in white #1. Single bevels are a different game in terms of cutting feel. Secondary whoa was the tremendous blood-to-pain ratio when you nick yourself. You don’t feel it but man does it bleed.

There's no whoa moment to be had when about one of your first non-cheap-factory J-knife is a Moritaka...

Maz Nakiri was a whoa moment when I went to dice onions with it.

Yu Kurosaki AS was a whoa moment that endured about ten cuts. The sucky beveling and brittle feeling edge didn't please me by then.

Ittetsu was not a bad moment, from where I was.

But it took me spending more money to really meet some whoa moments:

Shi.Han and a second Mabs are still with me.

Recently, Wakui B#2 iron clad had me completely thrilled like the noob I once was, which is a feeling I had almost forgotten about.

Gratifyingly pretty much all my recent purchases (Jiro, FM, Myojin) have made me do the full whoa lately, but admittedly I’ve made some nice, if obvious upgrades.,

I’ve actually been fairly glacial in my knife collecting until recently - I think I’ve bought as many knives in the last year as I did in the previous decade ‘thanks’ to KKF - and what was a patient pattern of gradual upgrades has generally kept some kind of ‘wow‘ factor intact for every new knife bar a couple of underwhelming Takefu missteps. But I‘ll admit that the first defining J-Knife ‘whoa’ moments for me were fairly stereotypical - a TF Mab, which opened eyes with its ridiculous ease of sharpening and brutal edge, plus the quintessential ’wow’ when I first clapped hands around a Kono HD and had my first real laser experience.

Honorable mentions go to Toyama and Prendergast, which were less 'whoa' in terms of absolute performance and more from the standpoint of great performance and cutting feel relative to their heft/workhorse-y-ness.
T

Most recently, my Steeleworks CuMai chef. So razor sharp ootb I had to slow down coring bell peppers so that I didn’t slip and cut my finger. 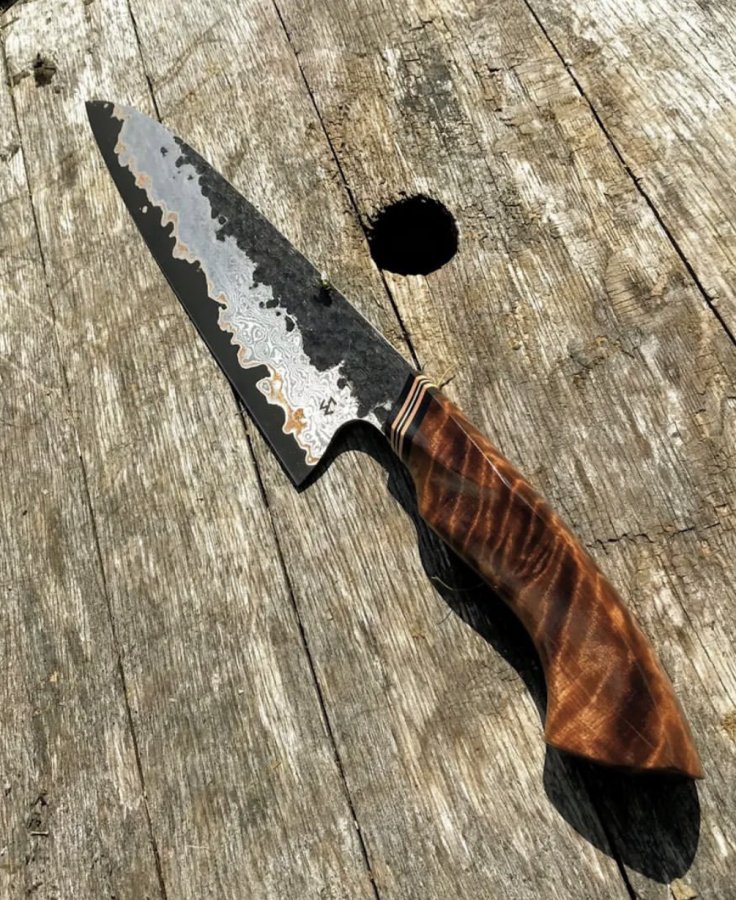 khashy said:
Everyone will have a WHOA moment when they cut with a Kato for the first time
Click to expand...

My latest was my Yoshi SKD 240mm Nashiji. From the first onion I was hooked.

Takamura R2 (the red-handled ones) - coming from western knives and then Miyabi/Yaxell/Tojiro, it was a whoa moment for me of how much sharper knives could be, and then down the rabbit hole I went...
M

Munetoshi! Although the whoa may have been post flattening of the bevels…
H

The tojiro mostly because it was my first descent knife.
The Suisin I've only had for a week now. It was really blunt when I got it. But a good sharpening from a pro just made it so nice.

nexus1935 said:
Takamura R2 (the red-handled ones) - coming from western knives and then Miyabi/Yaxell/Tojiro, it was a whoa moment for me of how much sharper knives could be, and then down the rabbit hole I went...
Click to expand...

Yeah I have to give them some credit there. The edge angle is ridiculous, and I actually put a microbevel on it straight away at the advice of others, but especially at the price point it really sets an incredibly high bar for out of the box sharpness that many other knives can only hope to achieve. Mine would split atoms just by pointing in their direction...
J

Weren’t the Kochi Migaki from JKI said to a) be from Wakui and b) in B#2?

JMS in Germany also has some aogami Wakui.

Wakui Warikomi Hocho
They have some other lines too, both in V2 and in Shirogami that tend to be a bit cheaper.

WifeNotUnderstand said:
I have the 240.... its awesome!
Click to expand...

I imagine. I sometimes regret that I didn't order it in 240. On the other hand the 215 suits me good.. the solution must be to own both some day.
J

That B2 Wakui looks awesome. How I missed these in the past, I'll never know.

My Wakui Hairline is probably my all time favourite knife. Except for the steel. Still definite whoa when first used it.
Mine weighs something around 208g. So it's a bit more robust than some of his other from the hairline series, but soooo thin behind the edge. Just a perfect knife for me. Profile, grind, weight, F&F all perfect.
But just not the biggest fan of W2. I love B2 though.
Too bad these days I want SS clad knives mostly, so actually a bit bummed I have to pass on those beauties.