I just finished these 2 paring knives for a client, shipping out tomorrow. The handles are Hawaiian Koa, one of the most beautiful wood species out there. The steel is 15n20 (such an underrated carbon steel) at 63HRC, sourced from the New Jersey Steel Baron. This particular batch of 15n20 was slated for band saw production, so it came hardened in the mid 40s (if memory serves). I like to know the exact condition my steel is in, so I didn't take any chances by simply hardening and tempering it as received. The 15n20 went through a normalizing cycle, 3 thermal cycles, a pre-quench, and final hardening/tempering. I also like to take paring knives down to a "zero" edge, and then knock them back just enough to establish a flat that will just reflect light. This makes sharpening a cinch, and superb performance! Edge is 25° inclusive, Shapton Pro 1000. Thanks for looking! 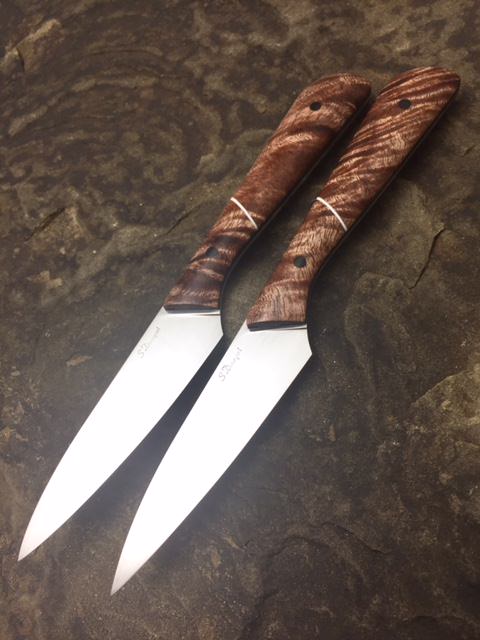 Very nice. Handles look comfortable and the koa is something else.

samuraistuart said:
The steel is 15n20 (such an underrated carbon steel) at 63HRC, sourced from the New Jersey Steel Baron. This particular batch of 15n20 was slated for band saw production, so it came hardened in the mid 40s (if memory serves). I like to know the exact condition my steel is in, so I didn't take any chances by simply hardening and tempering it as received.

These are beautiful! Great koa as mentioned, profiles have great eye appeal!

One question, was this 15N20 from Aldo 0.095" stock? I have been using some that thickness that seems to eat up hacksaw blades, cobalt drill bits, and sanding belts a lot faster than I expected pre-HT.
S

Thanks guys! Milkbaby, the 15n02 is indeed from Aldo, but I bought the 0.070" (it may have actually been 0.072"). But your observation is correct...some of the 15n20 he stocks is hard (or semi hard). Aldo told me that some of his 15n20 steel was originally slated for band saw production, and being such were already hardened/tempered and not annealed. However, IIRC, the hardness was relatively low for our knife standards, somewhere in the low to mid 40HRC. I could cut it with a hacksaw and drill it easy enough, but you could definitely tell it was semi hard. This is sort of an issue with me. I like to know exactly the condition of my steel prior to working it and heat treating. Steel "usually" comes fine spheroidized, and can go straight to hardening/quench/temper. If I don't know that for sure, then I will go through the process of normalizing it to, in layman's terms, "re-set" the structure, thermal cycle it to take care of any possible enlarged aus grain, then on to hardening operations. There is also the issue that most of Aldo's carbon steels come from the mill in Germany "heavily" (or "coarse") spheroidized. The carbon has a tight bond in it's carbide structure due to this coarse spheroidized structure, and requires a normalizing heat to free up enough carbon to get maximum hardness. At least that was the case with his steels some years back, and because of that issue, when I heat treat Aldo's carbon steels, I go through that whole rigamarole just to be safe. Aldo's early 52100 was notorious for only reaching ~63HRC post quench, and Kevin Cashen was tapped into to figure out why. Turns out it was the coarse spheroidization of the 52100, and a good normalizing heat was required in order to free the carbon from it's tight carbide hold and thus reach the goal of HRC 66-67+ post quench. I would highly recommend you do the same when working with that 15n20 you have, and any of his carbon steels. AKA: 1075, 15n20, 1084, 80CrV2, 1095, W2, 52100. (I have no idea where his O1 comes from, never used it from him). For his 15n20, normalize 1600-1650f, 10 minute soak and air cool only. Thermal cycle 3x 1500f, reduce soak times each cycle air cool only. Harden 1475f-1500f, 10 minute soak, medium or fast oil quench. 2x tempers.

15n20 if it actually is 15n20 from uddeholm then it might be supplied as: ready for welding/"use" for the intended purpose format. bandsaw steel for wood at 38-45 or so hrc. i think this is the most common format.
This steel was actually invented for sawing wood at 40hrc or so. and if they had intended it to go higher they would have used something else more ultimate for the task. just saying.
S

Thanks for posting Inferno. I have no idea if Aldo sources 15n20 direct from BU or the other mill he uses in Germany. But with that said, he had 15n20 in varying thicknesses. Some of it was ~40HRC, other thicknesses were fully annealed. My guess is he sourced it from varying suppliers. I did not know bandsaw blades were as soft as 38-45. I would have thought it would be harder, but honestly had no idea.
You must log in or register to reply here.
Share:
Facebook Twitter Reddit Pinterest Tumblr WhatsApp Email Link