One of my favorite parts of knives is watching people cut with them. I often even watch myself cut with them. something about dicing an onion ... just perfection.

It must be said ... if you dont care ... there are other threads....
And onions are almost always sauteed .. so it doesnt matter all that much ... but still

Anybody else agree with me that for the even cuts the horizontal cuts should at least be done on the outer layers ... see highlighted Yellow & Green below. 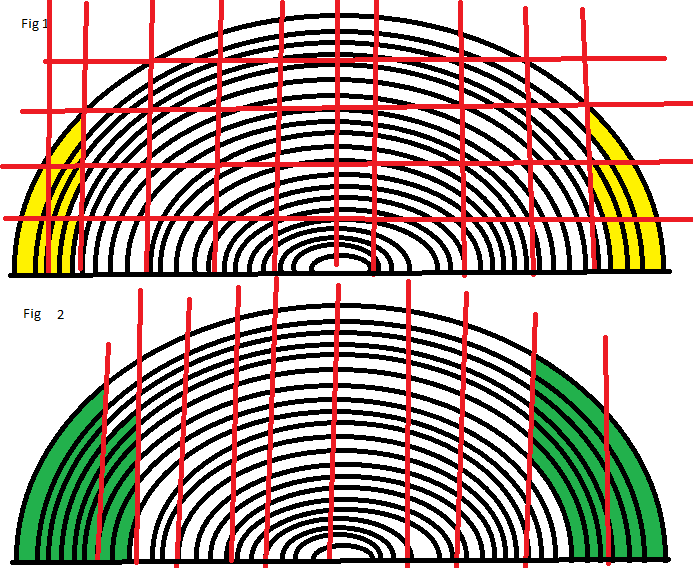 what the F*** are those horzontal cuts!

he doesnt care ... but atleast he his horzontal are right at the very end of the Onion

I think as a community we need more cutting videos still.

I'm terrible at cutting onions and I always seem to hurt myself with horizontal cuts. Either that or the cut would steer upwards of downwards, never perfectly parallel to my board.

Any tips on how I should practice this?

Some people do radial cuts all around. This would obviate the need for horizontal cuts.

I agree about how the outer layers should be included in horizontal cuts, but there are some variables like how fresh the onion is. Do the outer layers stick to the main body of the onion, or tend to separate and spread out as you cut? On some onions it might be preferable to just slice off and discard those outer bits, if you're looking for a uniform dice.

Another tricky thing about onions is that the ideal blade shape for the initial vertical and horizontal cuts isn't necessarily the same as for the final cut. The ideal knife for the horizontal cuts might be a long petty with less surface area that moves through the onion with less drag than a taller knife. But then you want a tall knife like a big gyuto or nakiri for the final vertical dice, so the product doesn't slide up and over the top of the knife.

In practice, I just dice onion with a 165mm nakiri. I'm usually cutting other stuff along with it like garlic, ginger, or scallions, and I don't want to switch knives just for the onion. As long as the onion is fresh enough, a nakiri works well enough for the vertical and horizontal cuts while not being ideal for it, and it's great for the final vertical dice and scooping up the product afterwards for transfer to a prep bowl.

If onions a visible part of finished product, salsa, garnish, etc, then I'll do horizontal. Most of what I do are part of mire poix or the like and I don't do horizontal, just rough dice or julienne.

I find radial cuts more awkward and slower, personally. Less cuts overall, perhaps, but it's harder for me to go super fast if the angle of the cut is changing every time.

I do the horizontal cuts via a push cut in the middle of the knife, rather than a tip sweep, though. Works better, with more control, at least for me.

Even in the first vid above, though, the horizontal cuts only go like halfway through. Gotta go farther!
Last edited: Nov 8, 2019

I think you should either do 100% horizontal or none

Horizontal is for brunoiseish cuts where it'll be visible only. Otherwise radial cuts. Have someone getting after you to get through x number of 50 lb bags of onions is a quick teacher.

The fact is, no matter what technique you use, onions are imperfect and will ALWAYS be inconsistent in appearance, so do what you feel. With that said, I think radial cuts are the most consistently attractive have the best texture. Also the cuts follow the natural growth patterns of the onion, so are less destructive to the tissues of the onion. This technique requires cutting off both ends and having both a sharp knife, and reasonably good skills to constantly adjust the angle of your cut to meet the center. Size of cut pieces can vary considerably but generally look nice.

I exclusively used radial cuts my whole life, but have recently adopted the traditional method with horizontal and vertical cuts only because it shows the knives cutting abilities better.

Probably one should just link the earlier thread, so we don't repeat the whole thing.

And if you look hard you'll find at least once/year. But always good to get new perspective.

ian said:
Probably one should just link the earlier thread, so we don't repeat the whole thing.

And if you look hard you'll find at least once/year. But always good to get new perspective.
Click to expand...

Indeed. Just trying to keep it to *only* once a year.

So, what should we talk about instead? How do y’all feel about flippers?

ian said:
Indeed. Just trying to keep it to *only* once a year.

So, what should we talk about instead? How do y’all feel about flippers?
Click to expand...

Here's a new one: I know someone who refuses to eat goat cheese because of "the smell/ taste/ whatever"

Then one day I was just chilling with a glass of wine my personal platter of Humboldt Fog and Midnight Moon (both goat cheeses from Cypress Grove), she asked for some, I shared it with her, she poured herself a glass of my wine and brought it & a small plate of the cheeses to her room.

The next morning she asked me to write down the names of the 2 cheeses so she could buy some for herself when she goes to Whole Foods.

But those cheeses are just good! Maybe she only has experience with crap goat cheese from a tube. Glad you educated her.

Im in the horizontal cut camp, although I get why radial for speed on big onions.

Sorry to burst your bubble, but if you haven’t evolved to the SlapChop TM- I’m in the year 3000 smdh. Pfssshhh horizontal cuts...

I found my unicorn. Who wants a Kato? Going cheap.

I found my unicorn. Who wants a Kato? Going cheap.
Click to expand...

Send it to me. I can let one of my coworkers use it as a can opener.

I found my unicorn. Who wants a Kato? Going cheap.
Click to expand...

How about getting Kato to custom make a san mai damascus slap chop blade?

Only his ancestors Tamahagane will do for a project of this magnitude. Along with some tasteful Urushi accents to slap on.

The first two videos in the OP are the same person.

bahamaroot said:
The first two videos in the OP are the same person.
Click to expand...

Aaron Gibson's username on CKTG is CGuarin and he did some videos for Mark under that name. Just check out the cutting board in each video. It's IS the same person.

bahamaroot said:
Aaron Gibson's username on CKTG is CGuarin and he did some videos for Mark under that name. Just check out the cutting board in each video. It's IS the same person.
Click to expand...

Sorry, should have included the in my earlier post.
S

I learned to do both horizontal and vertical cuts to dice onions in the late 80's and have pretty much done it the same way on probably a million onions at this point. I see TV people (Food Network and Create) do it opposite of how I do it as I go horizontal first vertical second. I feel like it is easier to do it that way as if I do vertical first the horizontal cuts feel like they are pulling the onion apart (I am sure it is just what I am comfortable with). I can pretty much dice an onion as fast as I want especially with my knives which are generally razor sharp.