Here are some pics I took when it arrived:

Updated sequence with minor edits: I believe @Nagakin is currently in possession, please contact @mrmoves92 who will be next! Thanks all.

mengwong said:
Updated sequence with minor edits: I believe @Nagakin is currently in possession, please contact @mrmoves92 who will be next! Thanks all.

I have it right now, and I will send it to @blokey soon.
M

I sent the knife to blokey two days ago.

I was traveling for work during part of my week with the knife, and I am only a home cook, so I didn’t use it a ton, but here are my thoughts:

Condition when I got it:
When I got the knife, the tip was rounded, and there were some light scratches from sharpening. The knife was completely dull. It wouldn’t even initiate a cut/bite into newspaper with the grain.

Sharpening:
Given how dull it was when I received the knife, I had to sharpen the knife (more than I was expecting). I didn’t want to excessively sharpen the knife because it is someone else’s knife, and other people will be sharpening it, so I just sharpened it enough to be usable. I am used to simple carbon steels (white, blue) and ginsan, which are all easy to sharpen. Sharpening Magnacut was different for me. The steel felt hard and like it didn’t want to be abraded. The knife/stones did not release much slurry/mud, and everything seemed to take more time to happen. With the time I spent, my simple carbon or ginsan knives would have gotten sharper than the Magnacut knife ended up being, but that could just be my fault. For me, I will probably stick to simple, really easy to sharpen steels like white, blue, and ginsan, but that is my personal preference because I like easy sharpening and don’t need long edge retention at home.

Fit and finish:
Really nice! The spine and choil are rounded nicely, and the knife is really comfortable to hold and use. I LOVED the handle. It felt really nice to me. The sanded polish on the knife looked good.

Use:
You will have to take my points here with a pinch of salt because I am left handed (and this is a right handed knife), and I didn’t get the greatest edge on it.
The profile was a lot better than I was expecting, but the tip was a little high compared to what I prefer.
This knife cut well. The knife is thin overall/at the spine, but it still has decent food release for how thin it is (I am sure that it would have better/good food release for a right handed user). I care most about food release when cutting apples into ~1cm slices for lunch, and for this task, the pass around knife had better food release than my flatter ground knives, similar food release to my Kikuchiyo Yohei gyuto, but not as good food release compared to my Takeda gyuto.
The knife wasn’t super super thin behind the edge, which has pros and cons. It felt sturdy in use and never felt delicate to me, but it caught up a bit in really dense carrots (a better edge might have helped some). It behaved well in everything else and cut well/smoothly.

That is everything that I can think of. Hopefully, what I said was accurate. I am relatively inexperienced compared to many here, so I would trust the opinions from other users more than myself.

Just got the knife, looks great so far, the edge is working for me, I might do some sharpening on Gesshin 2k just to see how it feels. The grind and taper is good. 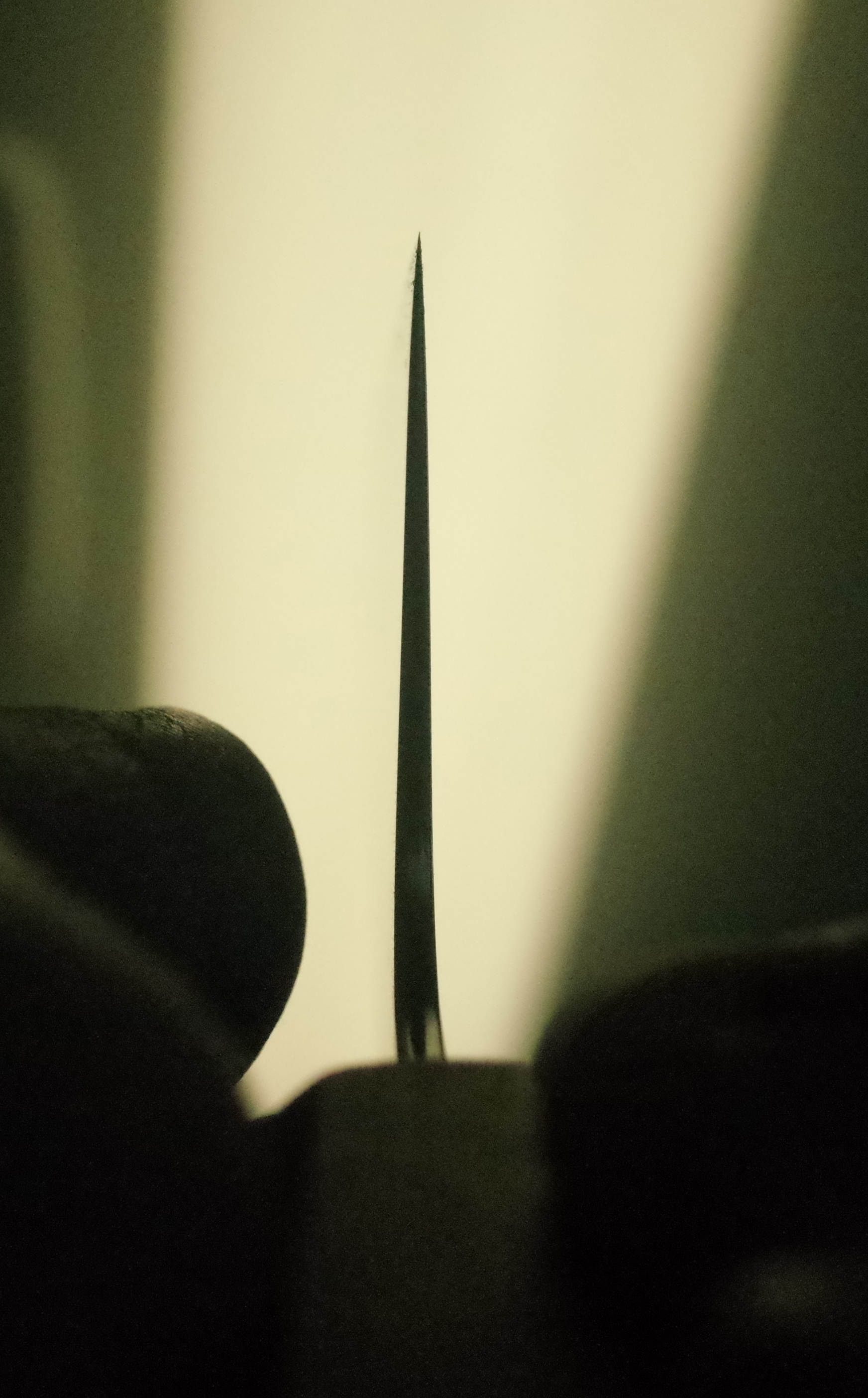 Just took it to the stone, first the sharpening itself actually feels pretty good, not the glassy and non-engaging feel of some other PMs. But it is still much harder to raise a burr than any carbon I've touched, probably took me longer than SG2. I used Gesshin 2k and stroped it on Gesshin 4k, as said before, while I definetly dont doubt with enough time and patience it could get as sharp as carbon steel, it is much harder to get to the same level of sharpness.

i wonder if i'll notice a difference on my diamond stones. will be interesting to try

Yes, everybody please feel free to sharpen. We’re here to learn about the steel. I’d say do it on the way in, not on the way out, to let the next guy have the full experience. And polish and thin or whatever, if that’s your thing.

Also can I request folks take a photo of themselves with some piece of produce stuck on the edge or on the tip? I want the knife to be able to entertain its fellows on the block, one day, with a slideshow from its travels.
Last edited: Friday at 7:11 AM

sansho said:
i wonder if i'll notice a difference on my diamond stones. will be interesting to try
Click to expand...