Also this small thing about geology, which I think probably explains relatively well what the lines or patterns are in my stone #8. It sounds like we're not sharpening across the layers of the slate as such, but rather across the original bedding planes, before the mud/shale had become slate. 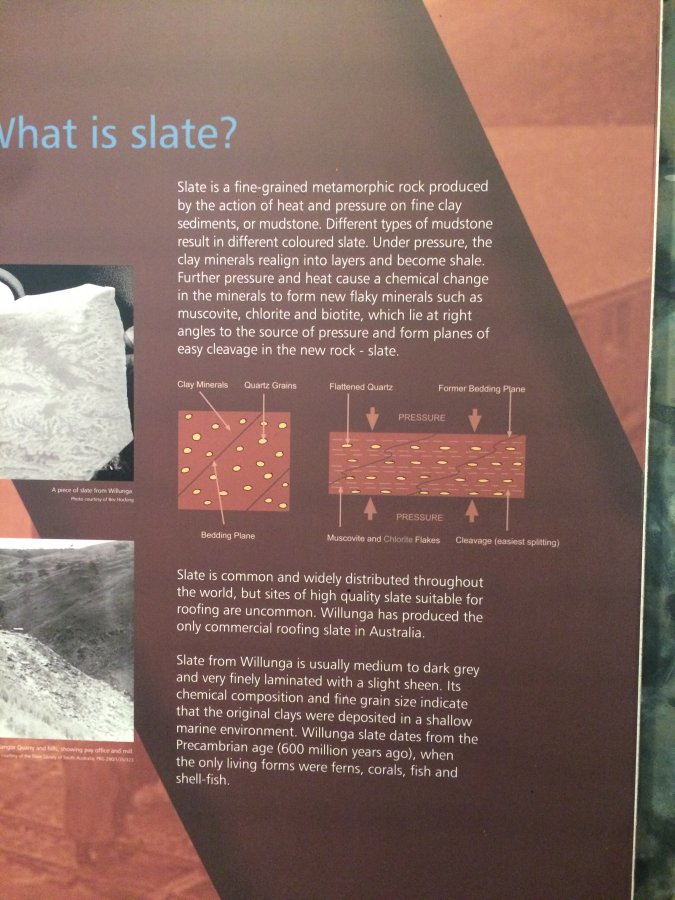 Anyway, needless to say all this excitement has put me in just the mood to flatten and try out Stone 14, which is one of a few I have atm that look promising... 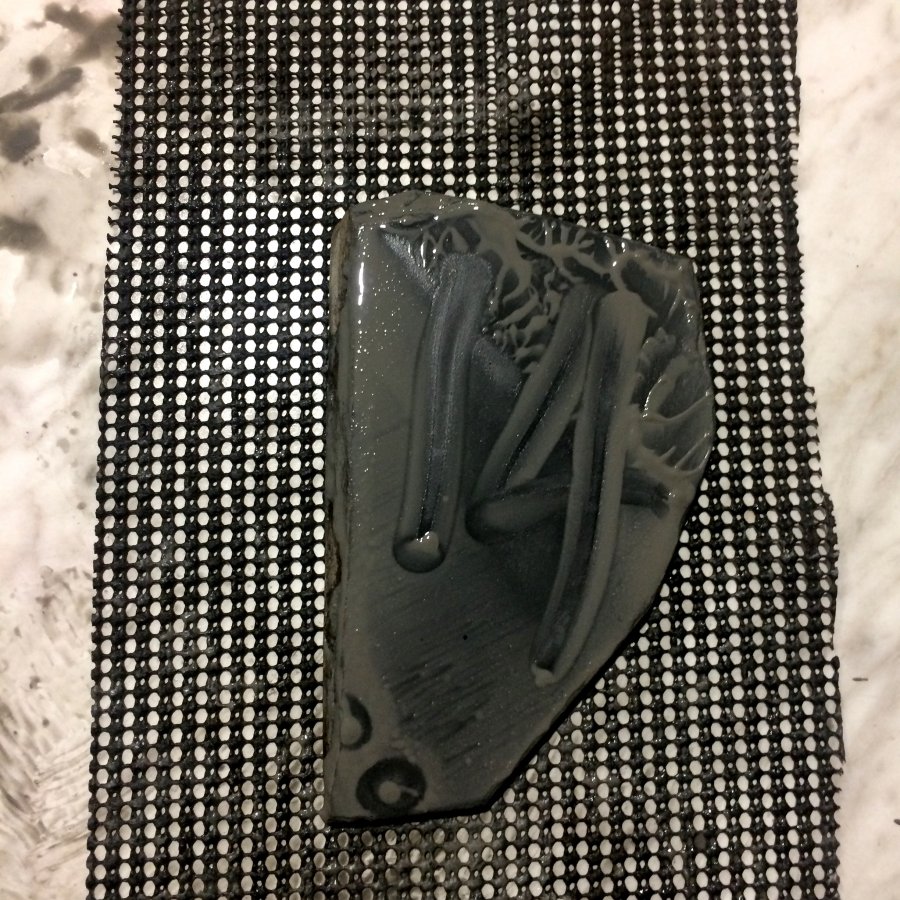 TBH I had pretty high hopes for stone 14. It's the last one I took home that I found in the same pile as #8-13, only one of which (#11) I didn't like. To my eye it looked and felt quite like #8, but actually in use it's slightly finer, and slightly harder. More similar to #10 and #13; and the particle size/distribution is spot-on perfectly even, like those two stones. A really lovely stone to use. If I didn't owe one to @GorillaGrunt I'd be keeping this.

I was beforehand doing some thinning on a 140/400 stone, so the scratch pattern on the blade is from that, but it now happily glides through kitchen towel. And also has some great bite on the edge, which may be either because this stone actually cuts reasonably well, or perhaps because I've gone from a 400 grit stone to something around 4k... (?) 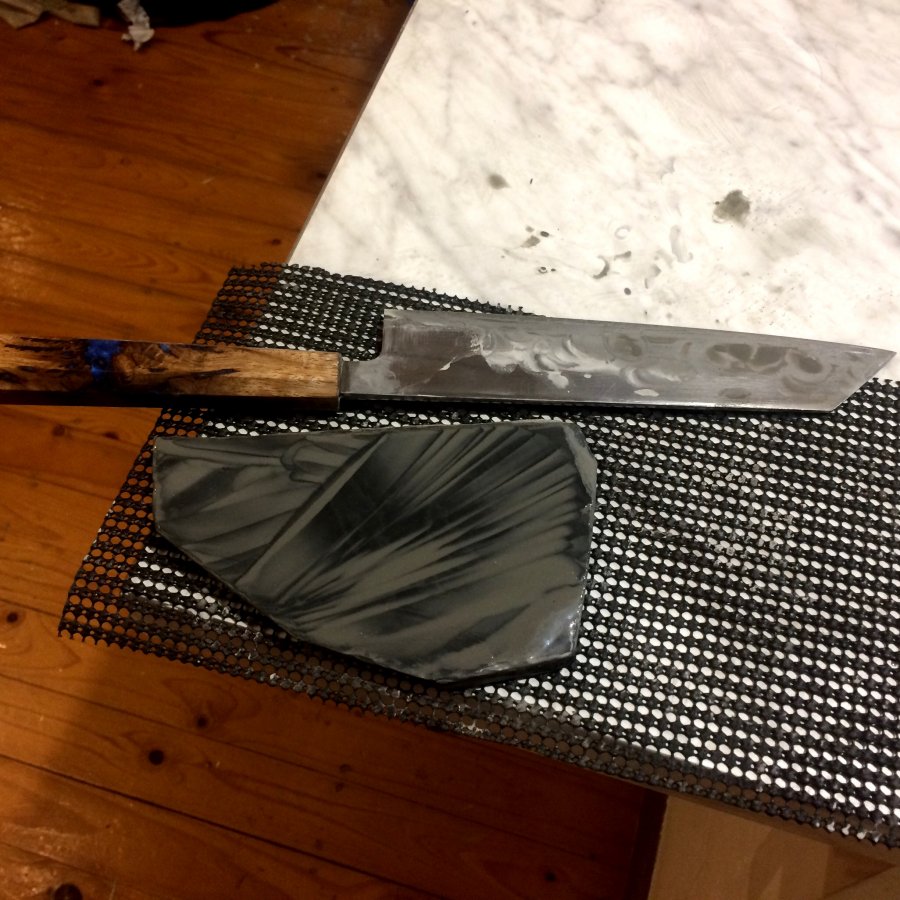 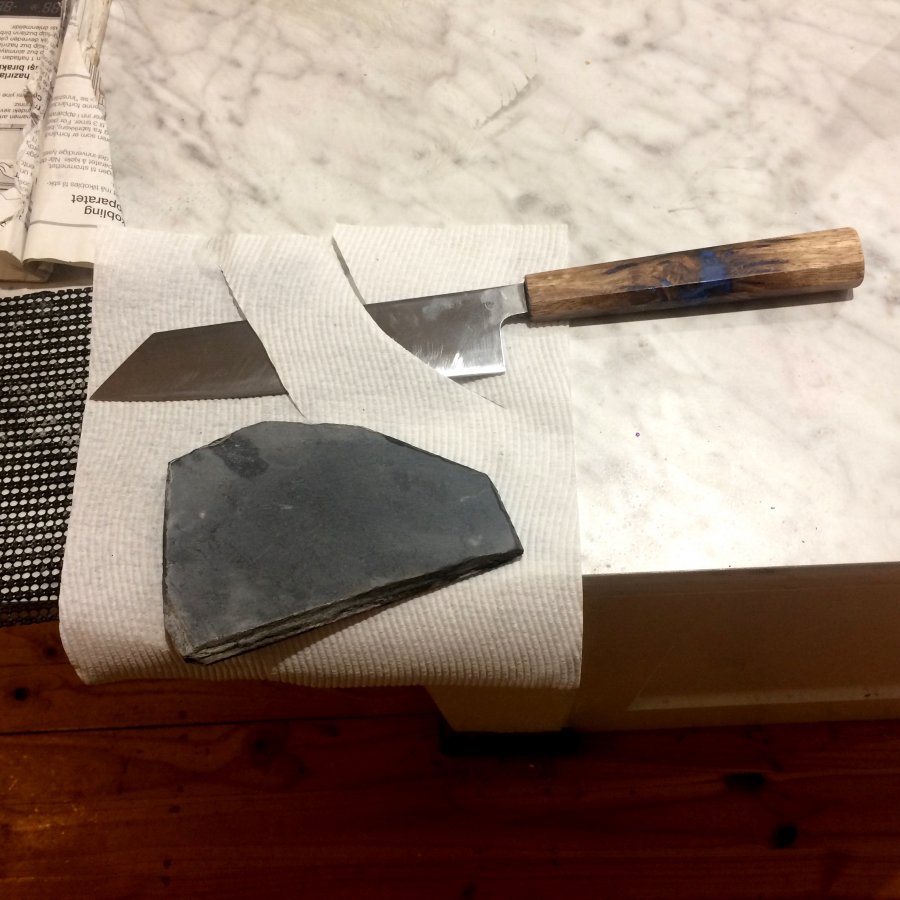 cotedupy said:
One day per month for just a few short hours the Willunga Slate Museum (the only one of its kind in Australia, don't you know) throws open its doors to the public, and reveals the treasures within... today was that day! The museum has its own eccentrically-dressed-and-bearded older gentleman, wearing a trilby, to guide you through the many exhibits. Including...

Maps n stuff, only two of the five quarries are still in operation:
View attachment 122230

And all manner of other slate-related paraphernalia, including a Cornish Pasty in a perspex box, and a speaker that read out 19th century newspaper reports describing in 'graphic detail' the deaths of various people working at the Willunga quarries back in the day... which was an interesting touch.
Click to expand...

Tools fascinate me, almost as much as the stones themselves.
On page six of this book "Ayrshire Hone-Stones", fig two shows a few tools and describes how sycthe stones where roughed out in the mine. 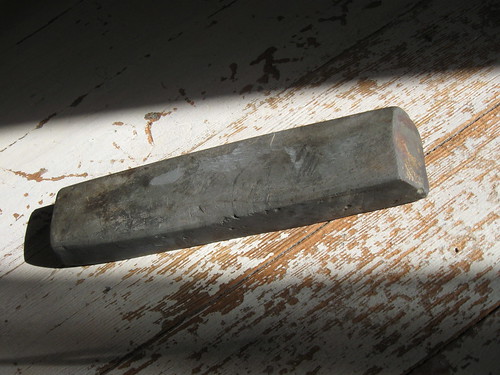 Desert Rat said:
Tools fascinate me, almost as much as the stones themselves.
On page six of this book "Ayrshire Hone-Stones", fig two shows a few tools and describes how sycthe stones where roughed out in the mine.

Very interesting stuff, thank you very much for sharing!

Desert Rat said:
Tools fascinate me, almost as much as the stones themselves.
On page six of this book "Ayrshire Hone-Stones", fig two shows a few tools and describes how sycthe stones where roughed out in the mine.

Fascinating links, thank you. This is what the internet is for!

Once more unto the breach, dear friends, once more. A closer examination of particle size, look and feel...

Outside my kitchen door I now have 3 small piles of slate. The first is slates I've found and think look promising but haven't tried. The second is pieces I've flattened and tried a bit, and then decided I wasn't so keen. The third is just chips and offcuts, that I sometimes use as slurry stones. Stone 15 and 16 are from the first pile, and Stone 3 from the second, as I thought it maybe deserved more attention. From L to R: 3, 15, 16, and 8 as a comparison. 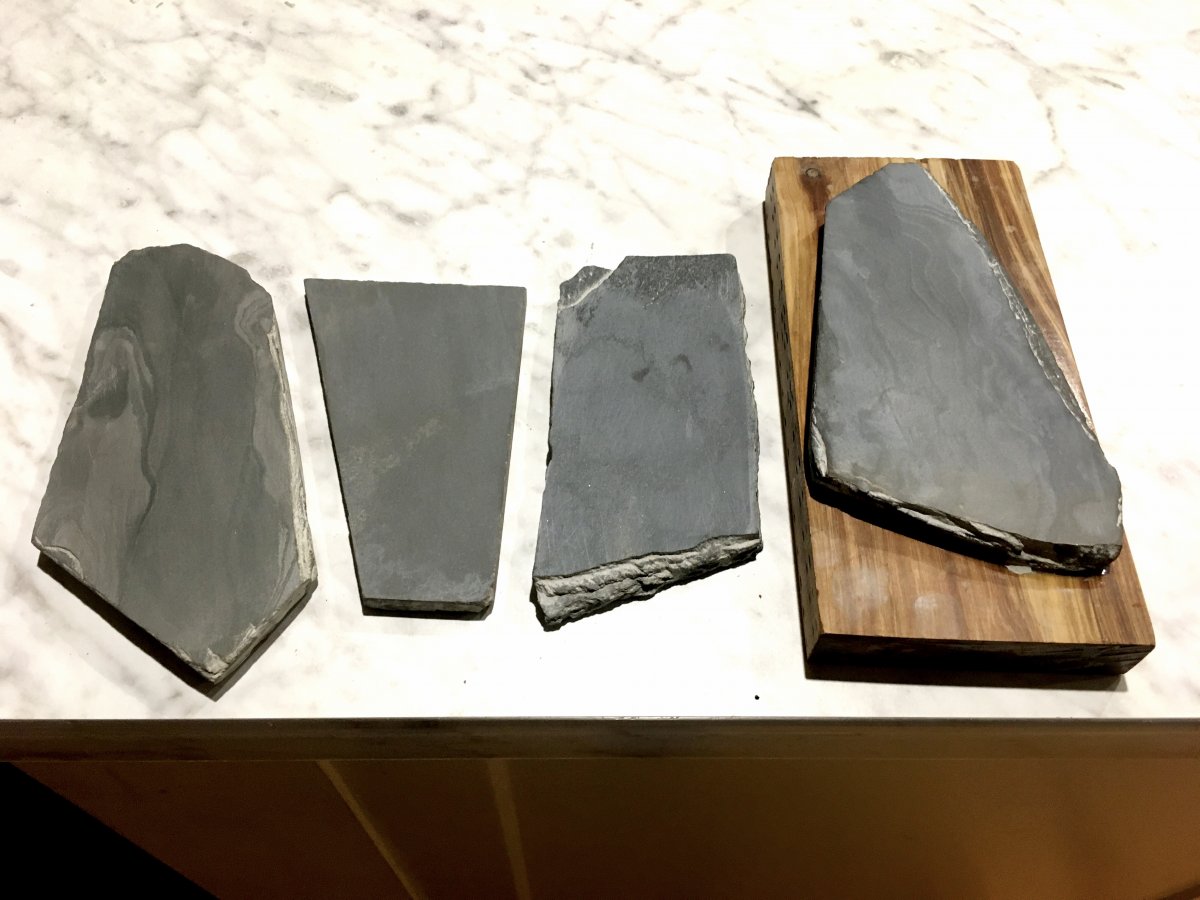 Let's have a look at my favourite stone 8 up close (all of the following pictures of the stones have had a filter applied that maximises small bits of contrast). 8 has a very even particle size and distribution. 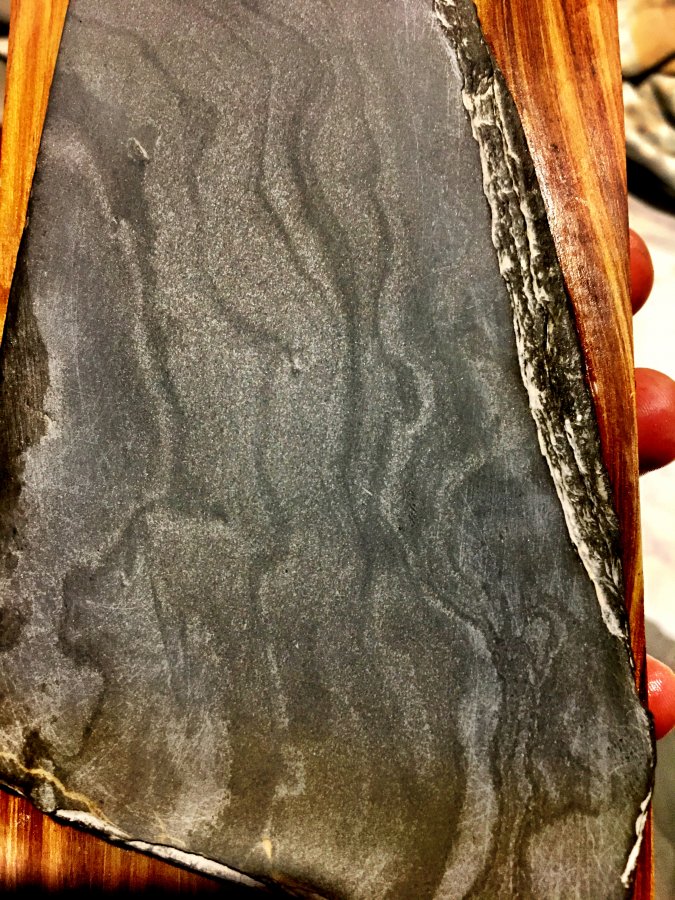 Now let's look at 3. I can't remember exactly why I wasn't so keen on it originally, but I'm 99% certain it'd be because of those brown bits on the left and the right. The middle of the stone looks a lot like 8, but those bits on the side are softer - you can see how the scratch patterns from a diamond plate are more marked there. This stone is completely flat btw. 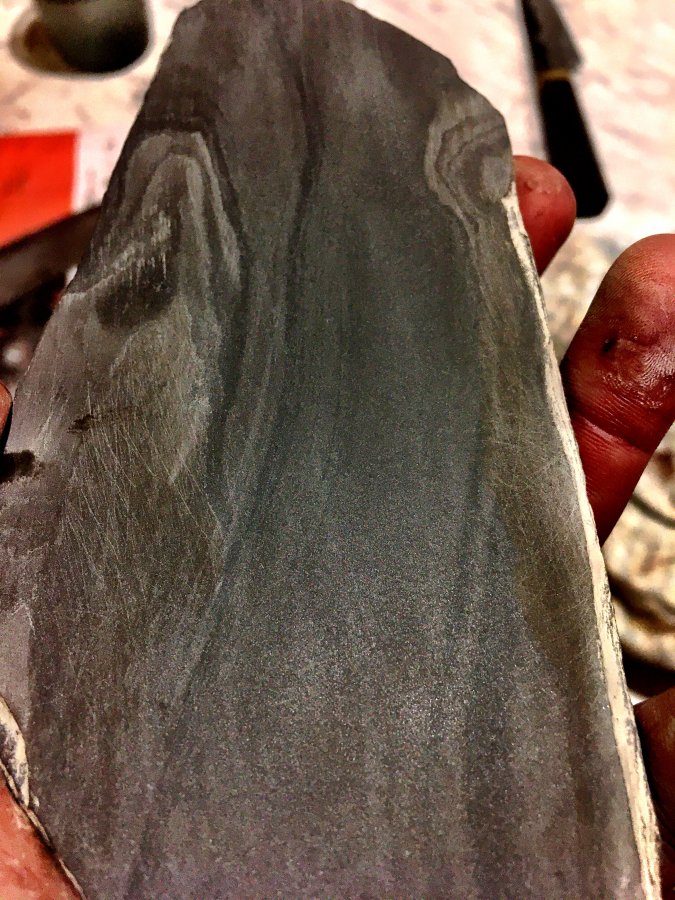 Nevertheless, now that I've really properly flattened it Stone 3 is really quite good. It's a very lovely feeling stone; the mud from the slightly softer bits makes it rather nice to use, and it sharpens excellently. I've taken to using an old bunka blade that I trash the edge of before trying these stones. When I start on each it doesn't have a hope of going through any kind of paper, after a few mins on stone 3 it's cutting kitchen towel pretty slickly. 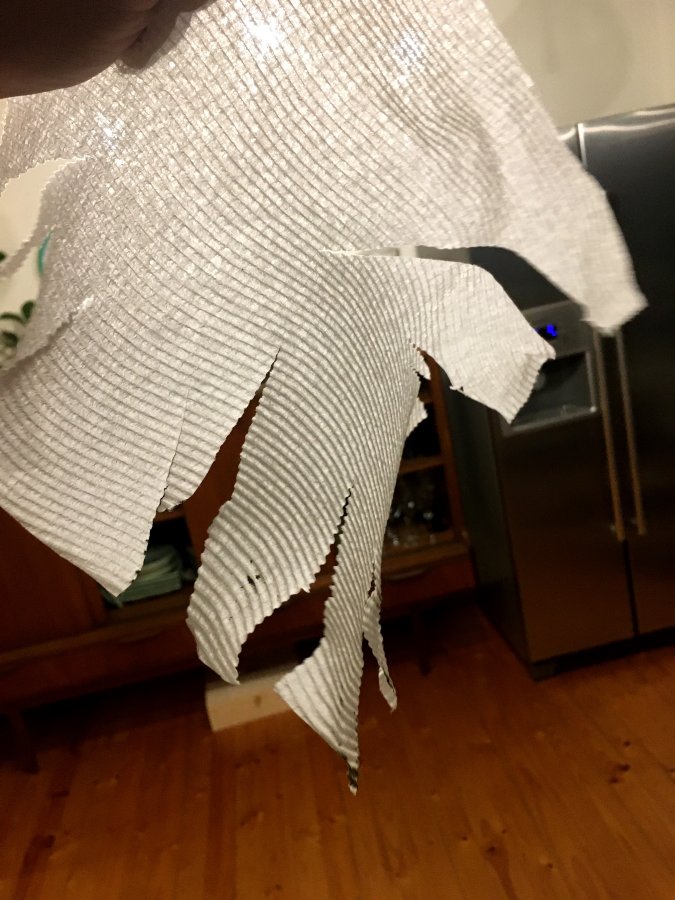 Stone 15 is a little different from most of the other stones I've got, and I'm not sure where I found it. But it has been cut previously by someone, and the layering is much more dense and compact than most of my other stones, barely even visible. Here's the surface of 15. 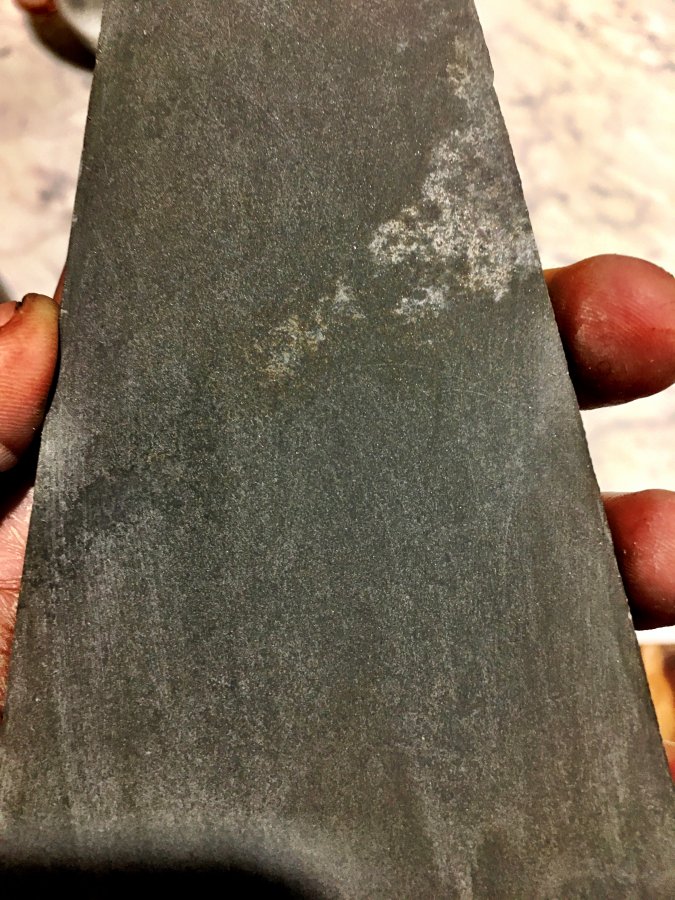 The particle size in 15 looks a bit larger perhaps, but it's quite even, and there are no really large bits anywhere (remembering that these pictures massively exaggerate differences on the surface). I re-blunt my blade and try it out... The stone is hard, it doesn't slurry much at all, and requires a fair bit of pressure when sharpening. It's not as quick as stone 3 but gets the job done after a while, the edge has a bit less bite than 3. 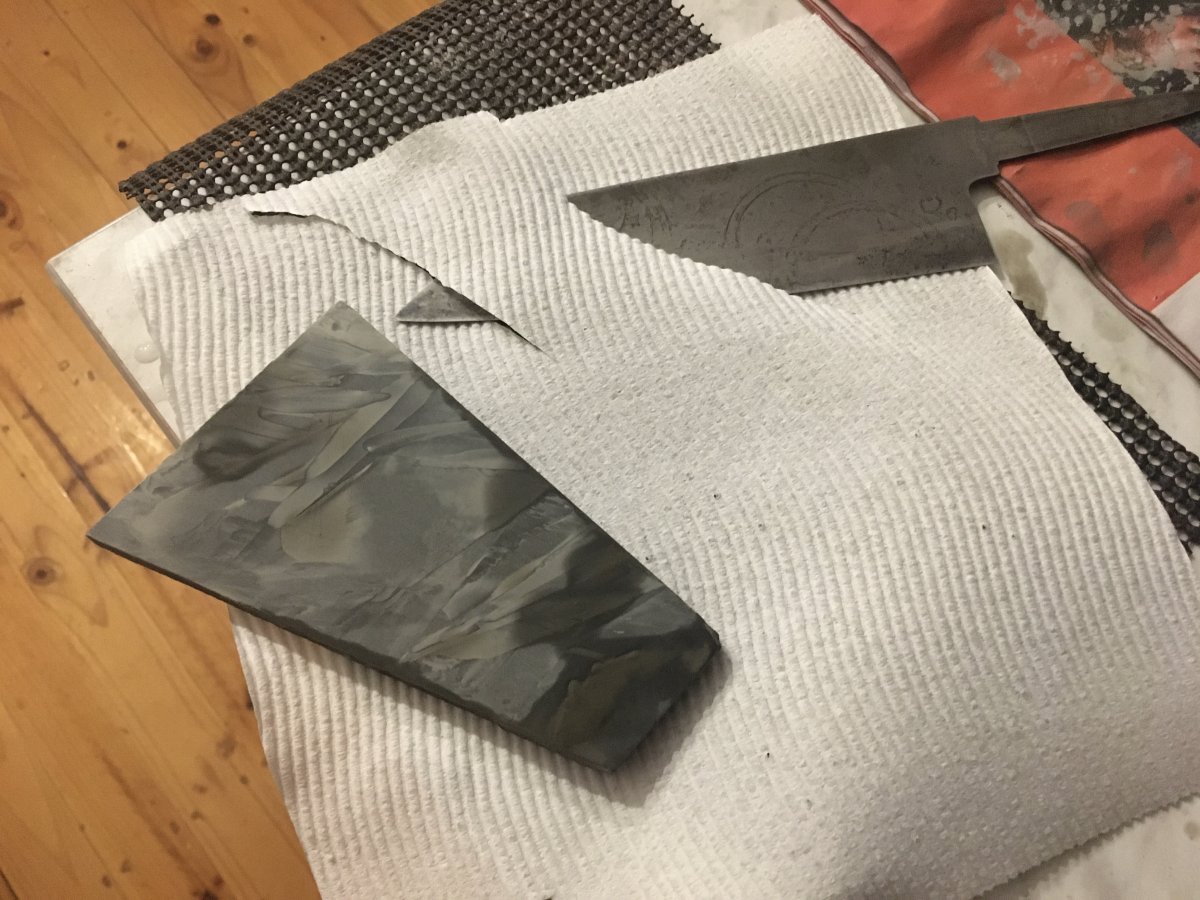 Something about 15 gives me the impression that it might be a good kasumi / polishing stone, so I give it a go. It's rather tricky to take good pictures of this in my kitchen at night, but there's almost no scratch pattern on the kasumi, and the edge is shiny-ish. This is the best kasumi slate I've found. 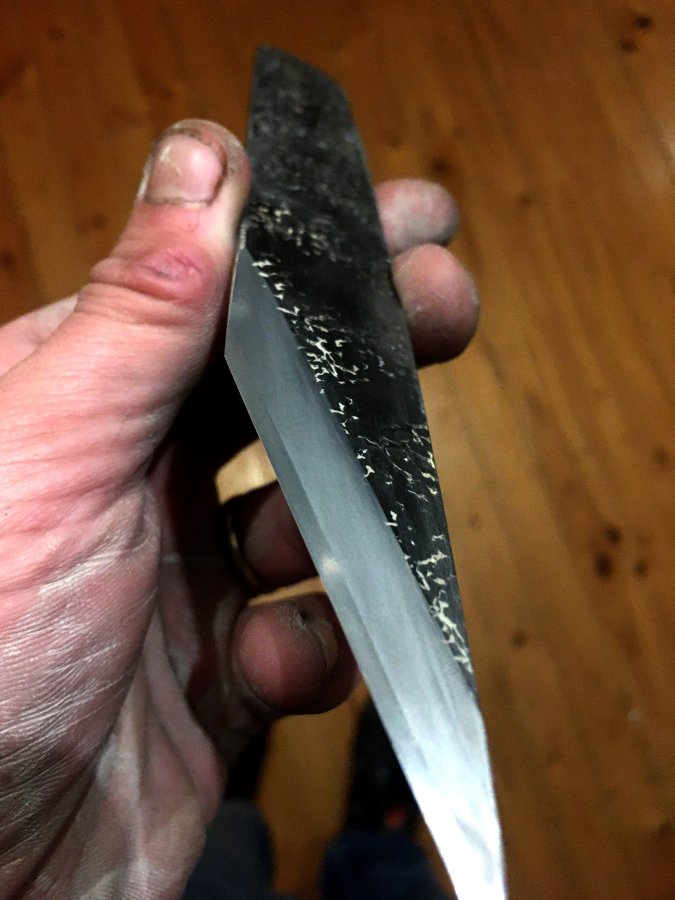 Up close stone 16 is a bit of a mess tbh. The quartz is not particularly even, and some bits are quite big: 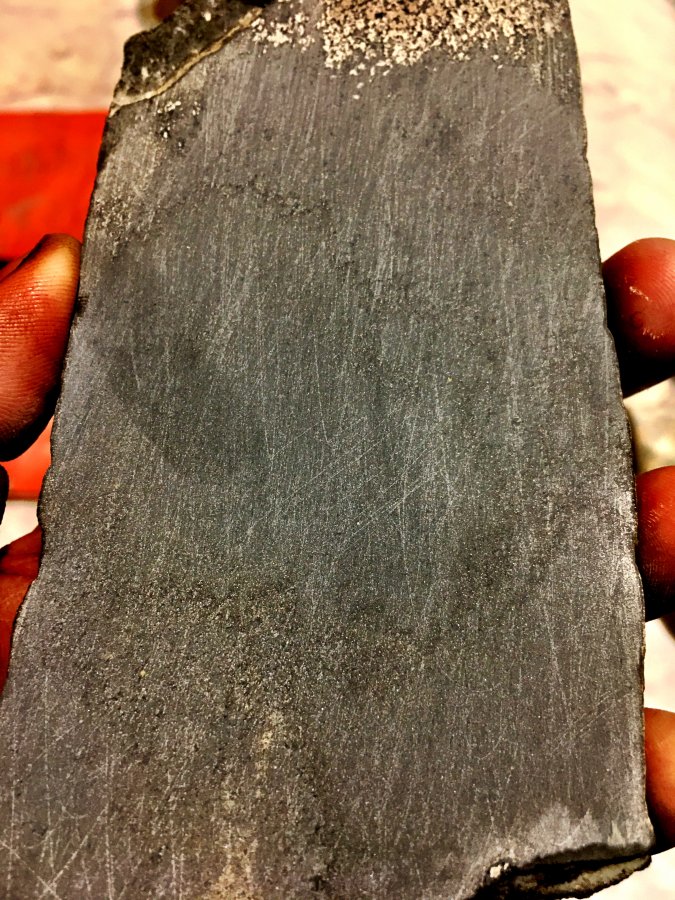 I can't get 16 to sharpen particularly well. Unfortunately it's also relatively soft (note the atoma scratches), and releases some scratchy stuff around the place. Here's a picture of stone 16 after I've tried it out, those big glisten-y bits are causing problems. This will go off to pile 2. 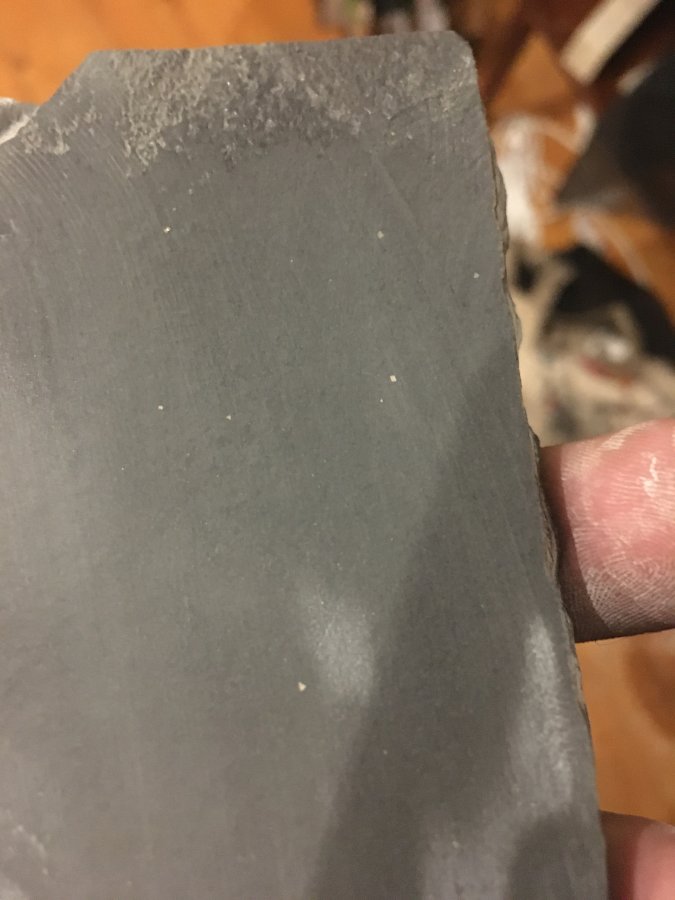 I was quite happy with this evening's outcome. It's probably taught me that perhaps the hardness, or bind, of the stones has more impact on the effective 'grit' than the size of the particles... Stone 15 certainly looks coarser than 3 or 8, but seems to act finer, to me at least.
Last edited: Apr 29, 2021
N

I got a old slate, might be an Escher. It came from outside in wet condition. First try was good feeling/feedback, instantly cutting. I thoght about getting me a razor. Stored dry about a decade the stone became pretty hard.