New knife- Takeda gyuto-feel like i'm late to the party....

So after seeing the Takeda in the for sale section a while ago and watching it whilst i tried to justify a reason to buy it, Christmas crept up and gave me the excuse i needed.
It arrived this morning and for the last hour i've been playing around with it. Upon opening it i was confused as i was expecting a thin knife that looking at the spine it was a good 4mm at the heel. I then looked down the blade and saw the crazy thin cross section and was reassured that this was going to behave like a thin knife.

The bevel was in great shape (thanks timthebeaver ), always a slight worry buying a used knife as i've had some shockers, but i couldn't resist taking it to the stones and making it shine.
Honing the wide bevel was again different to what i expected. I just felt too low to the stone, but i was hitting evenly all the way along and it just needed a quick 1k 6k progression to bring it up to an almost mirror finish. Slightly worried about an edge this shallow but i'll see how it holds before putting a microbevel on it.

It's so much fun to use, like a kind of gyuto cleaver hybrid that wants to cut stuff. Feel a bit like i'm late to the party as nearly everybody seems to have one or have used one already but it's such a nice knife to use i wish i had given in to temptation sooner.

Time to go to the shops and buy some veggies for tea, need something to go with the huge pile of diced potatoes and onions - thinking it'll be soup so i have an excuse to use it some more

Glad to hear you're a happy Takeda user!

I've been happy with my Takeda knives since my first one...
M

The rustic beauty, and incredible performance of Takeda's knives make them almost irresistable for me. I guarantee you will be wanting more. Congrats on the new knife
A

The alleles created by mutation may be beneficial

Very nice knife and not a bad looking bevel either.

Not quite as good as my polish, but not bad TB :thumbsup:

Glad you are pleased the knife.
W

Timthebeaver said:
Not quite as good as my polish, but not bad TB :thumbsup:

Glad you are pleased the knife.
Click to expand...

Lol, reckon it'll take another sharpening session or two to get the bevel completely even, then I might take it up to 12k just for jokes
C

I recently acquired my first Takeda, a nakiri, and couldn't be happier with it! It won't be my last one, I assure you.

I've been a fan of Takeda for some time now. Excellent knifes period. 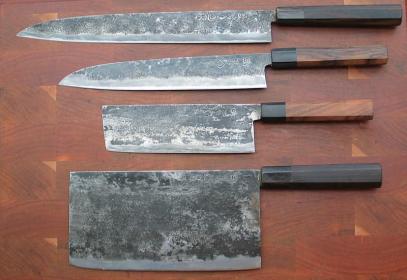 Very Nice, would love to have a play with that one. Did you try the fingerstone on it?
T

WillC said:
Very Nice, would love to have a play with that one. Did you try the fingerstone on it?
Click to expand...

Was going to, but thought I'd keep it shiny for now-quite like the contrast with kuro finish. Also want to see if the core takes a patina quickly.......
It's on the cards to try though

I would always go back and forth with my Takeda bevels with either the polished/mirrored look, or I would get my Chosera 600 super muddy and let that be the final polish for a gray/matte finish. Depending on my mood, but both looked awesome.

Congrats on your new knife! My last Takeda, the kiritsuke, is now spoken for and will be leaving me next week...I've been contemplating this decision for a while now, but it really will be hard to pack that thing up knowing how badass it is. Hopefully I don't regret it.

TB_London said:
Also want to see if the core takes a patina quickly.
Click to expand...

The core does patina quicker with a mirror polish on it, and will look awesome in contrast to the AS with its blues and purples, which then looks sweet a polished microbevel at the edge. Have fun with it!

Your korouchi appears quite a bit darker than mine. I love seeing how every single Takeda gyuto has a slightly different profile.

I didn't learn to fully love my Takeda until I realized how steep of a bevel it would take. It's a performer!

I have to say, I used one of these for the first time today. WHEW.

That is a HELL of a knife. Seriously.
T

johndoughy said:
I have to say, I used one of these for the first time today. WHEW.

That is a HELL of a knife. Seriously.
Click to expand...