This pork loin is somewhat similar to Canadian bacon, but with a lot more flavour, and much juicier. Perfect on any charcuterie platter, or fry some to go with your eggs for breakfast. 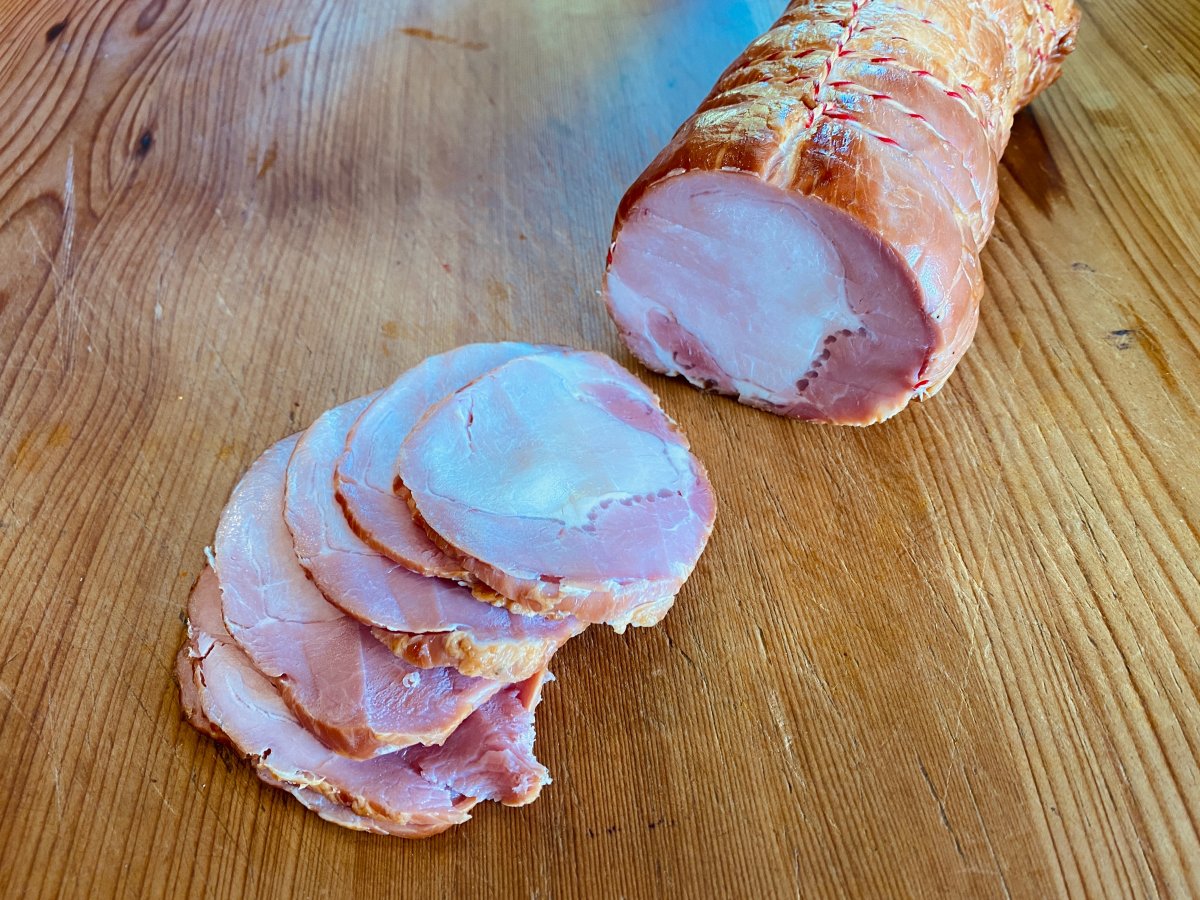 Ingredients:
You need a pork loin, nicely trimmed with very little fat remaining on the meat. This one ended up at 1.6 kg after trimming.

For the brine:
Method:
The loin will keep in the fridge for up to three weeks, and for several months if vacuum sealed and frozen in large chunks.

Here is some on a home-made bagel. It definitely beats any Canadian bacon from a shop

Do you think I could do this by using a smoker only? I was thinking I could hang it in my cold smoker part for some 3 hours at less than 200-degree F? What internal meat temp are you looking for?

The sous vide step is just one option; I used it because the loin is likely to retain more moisture that way and end up with a softer crust. If you don't mind a firmer crust, by all means, bake it in the smoker (without smoke).

Another option is to set up a pot of hot water at around 75 ºC (167 ºF). Throw in an onion, a few peppercorns, a few allspice berries, a few bay leaves, and a bit of salt. Then poach the loin in that broth for an hour.

Any of the above will work.

Argh! I shall need more pig...

So, there were not any good looking pork loins at the store when I checked.

But there WAS a boneless pork shoulder, about 10 lb. On sale, yet!

I made a 4X recipe of the brine, leaving out the juniper berries (because, not available,
unless I went out in the woods and found a juniper tree), trimmed about 2 lb. of fat off the pork roast and reserved that for future saussage making, ended up with 3 pieces of trimmed pork. I put the meat into 2X zip lock bags with the brine split up between. Turned bags daily, left them go for 10 days (pretty thick pieces compared to a loin).

Tonight I put the pork in the water smoker with some apple wood chunks. And right now, one of the thinner pieces has become part of a canadian bacon/pineapple pizza with ghost & habanero BBQ sauce.

(Note: I followed the instructions for air dry time. I did NOT coat the meat with egg yolks, due to a lack of eggs on hand- A neighbor's dog killed all my chickens back at beginning of June and BUYING eggs has not yet become part of my shopping scenario again... Still in the grieving process?) 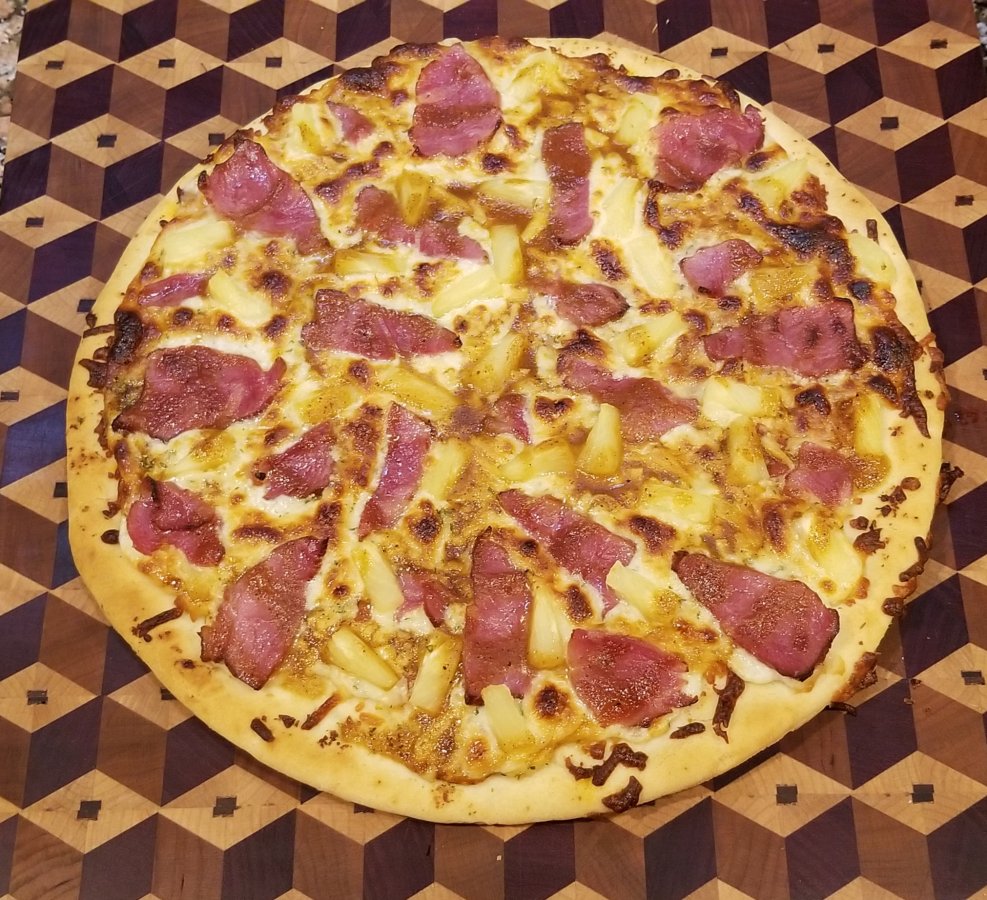 So, there were some half decent chunks of pork tenderloin at the local store today. I grabbed 2.

And I now have juniper berries and eggs.

Will give this a shot using techniques as Michi originally posted the recipe, I've run through the pork butt roast I used for the first try at curing & smoking, some as substitute for bacon on BLT sandwiches with late summer home grown tomato (excellent!) and some with potato and onion pierogies, jambalaya, etc. (All quite fine!).

Will update with results after at least 10 days, judging by thickness of pork pieces. 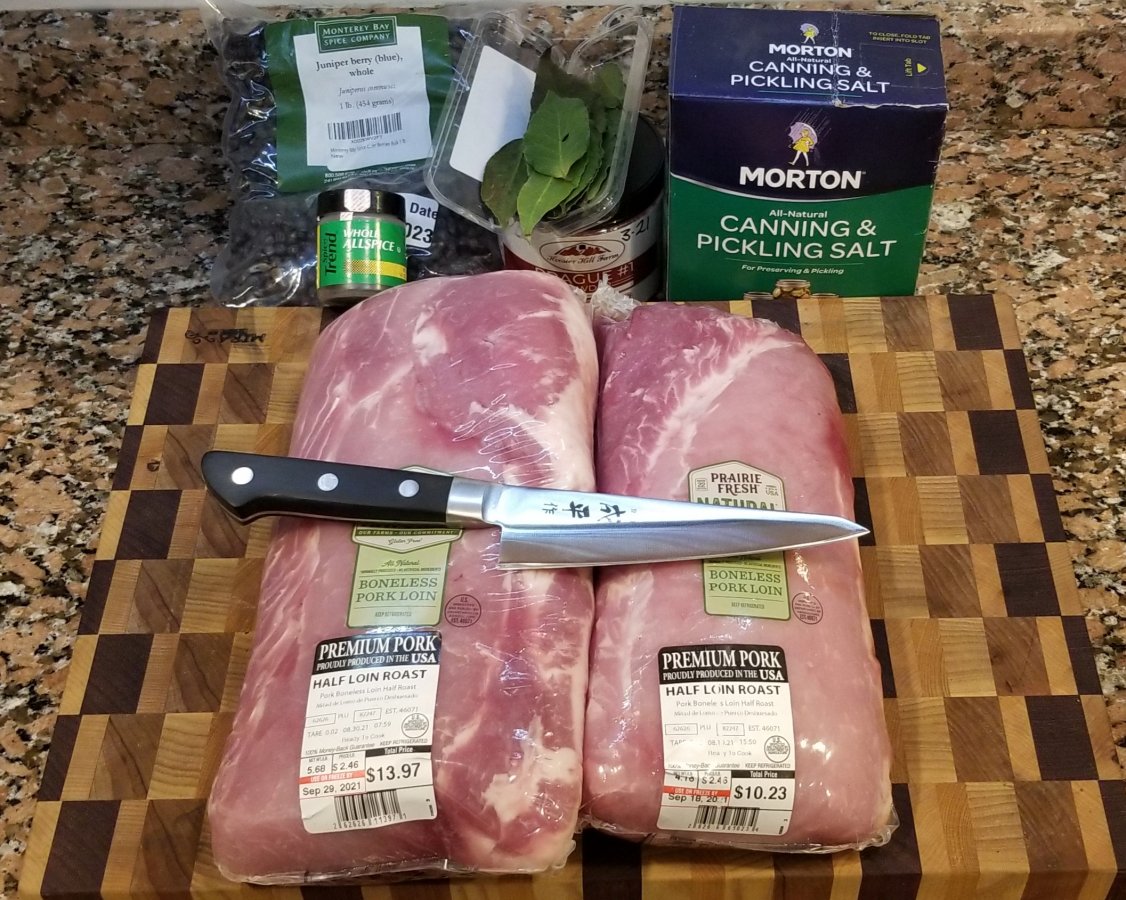 It's a bit difficult to tell from the photo, but it looks like a week of curing will be fine. What's relevant is the diameter of the meat along the shorter axis. Looks like about 3 inches, from your photo.

Forgot to mention: do use the cure #1. It's a safety thing. Mainly to prevent botulinum growing in your meat. And it also makes the finished product taste a lot better. Stick to the quantity quoted in the recipe. More is not better.

Ended up with about 3.5kg of pork loin after trimming. Thickness was indeed about 3" max.

This is kind of the way I make corned beef. I use a brisket and cure it with juniper berries, pink salt with nitrate, brown sugar with spices for a week.

Then instead of smoking it I boil it with cabbage, onions, carrots, potatoes.

I want to cook like @Michi when I grow up

Bert2368 said:
Ended up with about 3.5kg of pork loin after trimming. Thickness was indeed about 3" max.
Click to expand...

How did it turn out?

Michi said:
How did it turn out?
Click to expand...

Per your advice that longer cure time would not be harmful, the meat has just been rinsed, dried and set in fridge to develop "pellicle" today! More as this situation develops.

Things got busy at work, and are continuing to become even more so- Plus, late summer/early fall garden final rush to harvest & preserve vegies.

These loins were too big for the zip lock bags I had on hand. I used a thrift store sourced large ceramic crock with glass cover I had previously used for large batches of refrigerator pickles. I put some glass fermentation weights on the meat to keep it submerged, turned the loins daily except for 2 days I was out of town. 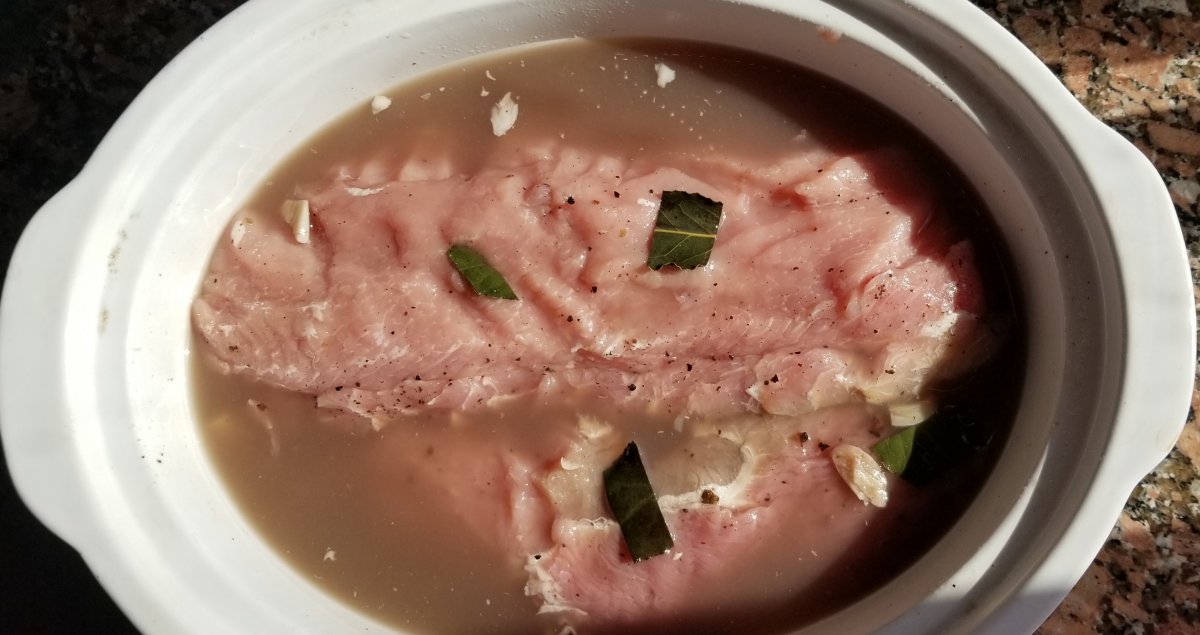 Took most of 2 egg yolks to cover this batch. I did NOT use string or a net, my smoker is not large enough to hang pieces of meat this size- I did "squash" the loins into a more or less square cross section before warm air drying after egg yolk coating. 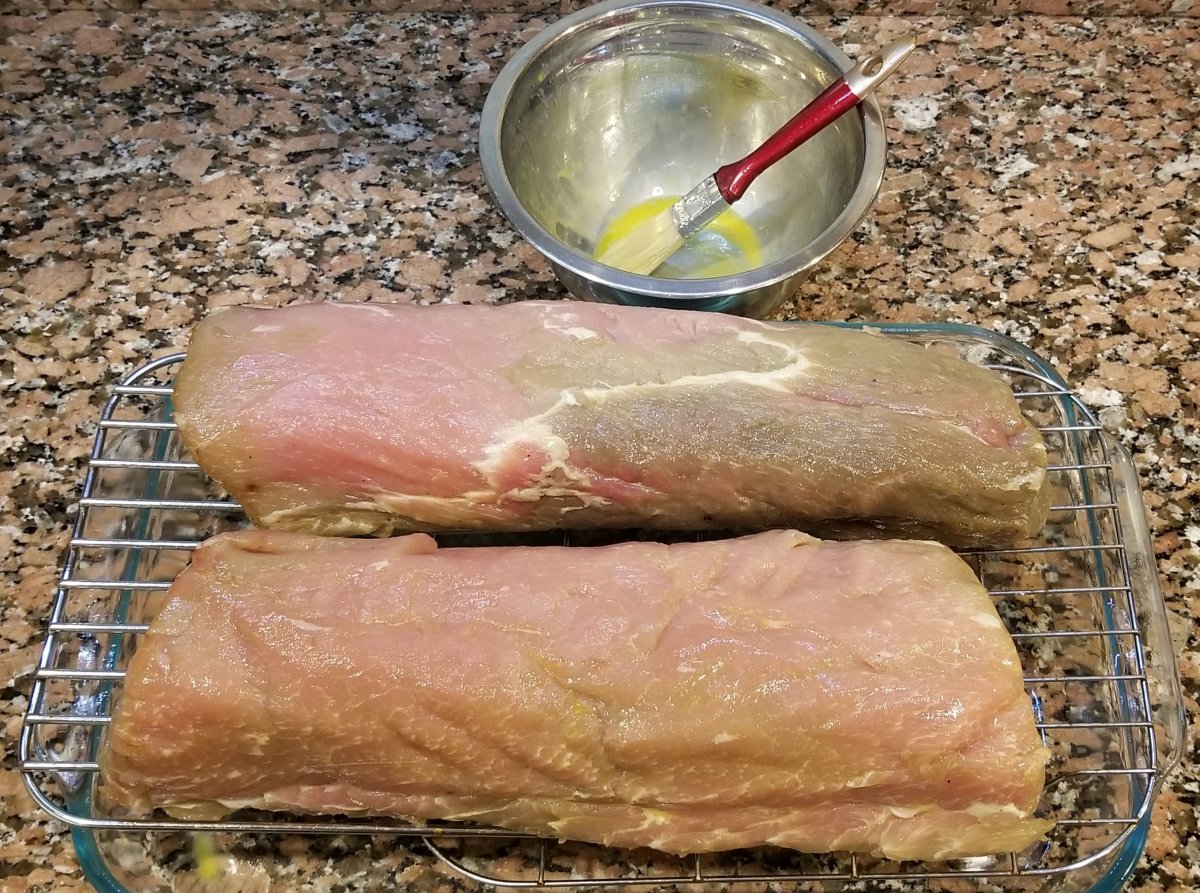 My cheap ass Walmart charcoal fired water smoker, with home grown apple wood chunks once again. Some day I should invest in an electric smoker with a thermostat.

After 2 hours in the smoker with air temps above meat wandering between 150 and 190°F, the internal temperatures of the loins were around 138° to 140 °F, a bit low for pork. So, on to the sous vide water bath- 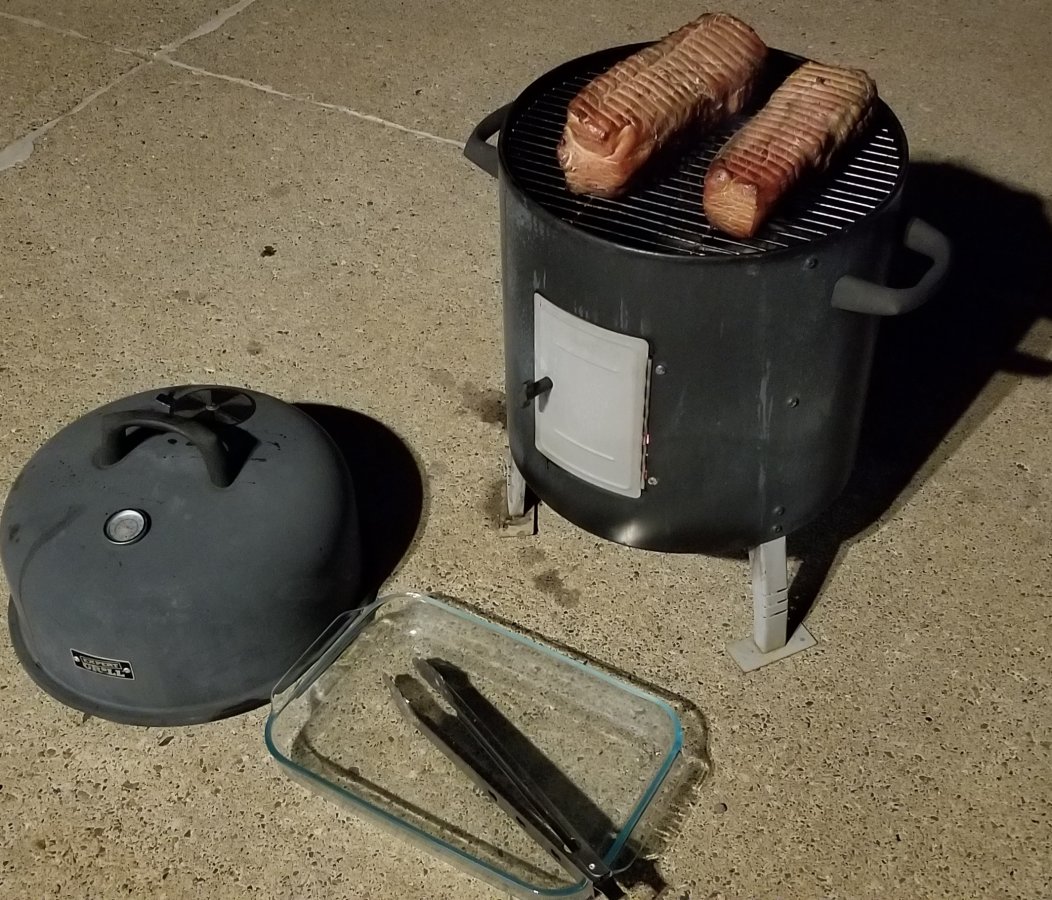 I have never before seen as much liquid pulled out of an (apparently) dry piece of smoked meat as these released during vacuum bagging. Had to carefully dry the ends of bags and re seal the bags to be sure they were water tight, plus I cleaned a few ounces of liquid out of vacuum sealer after each vacuum & seal operation. Beginning to believe Michi's claims of juiciness. 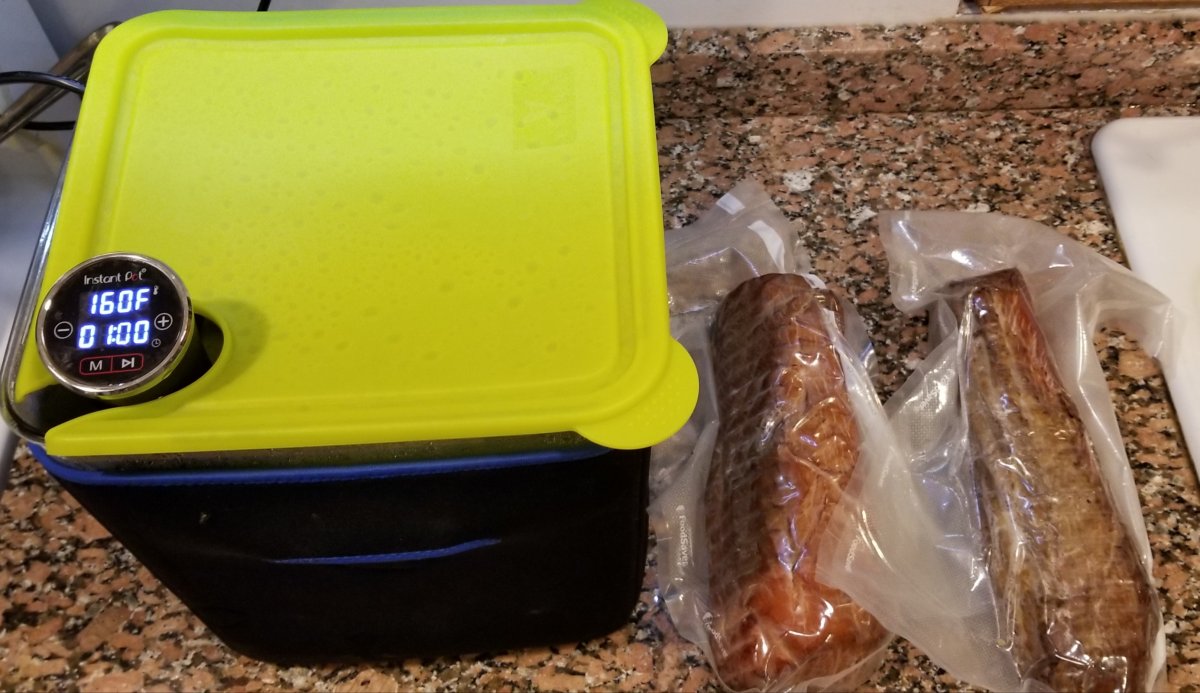 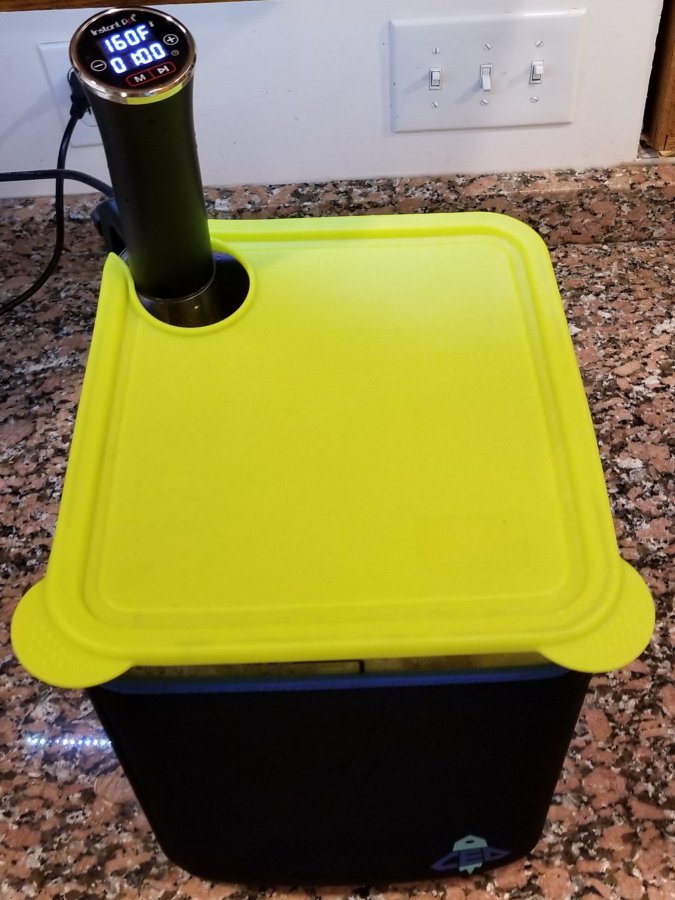 An hour later, chilled in ice water for 15 minutes, removed from bags. Saved about a cup of sous vide liquid from bags, probably will go into bean soup some time this winter.

Took a slice off of one loin and tasted before reposing the majority in fridge for the night- It is a goodness thing. 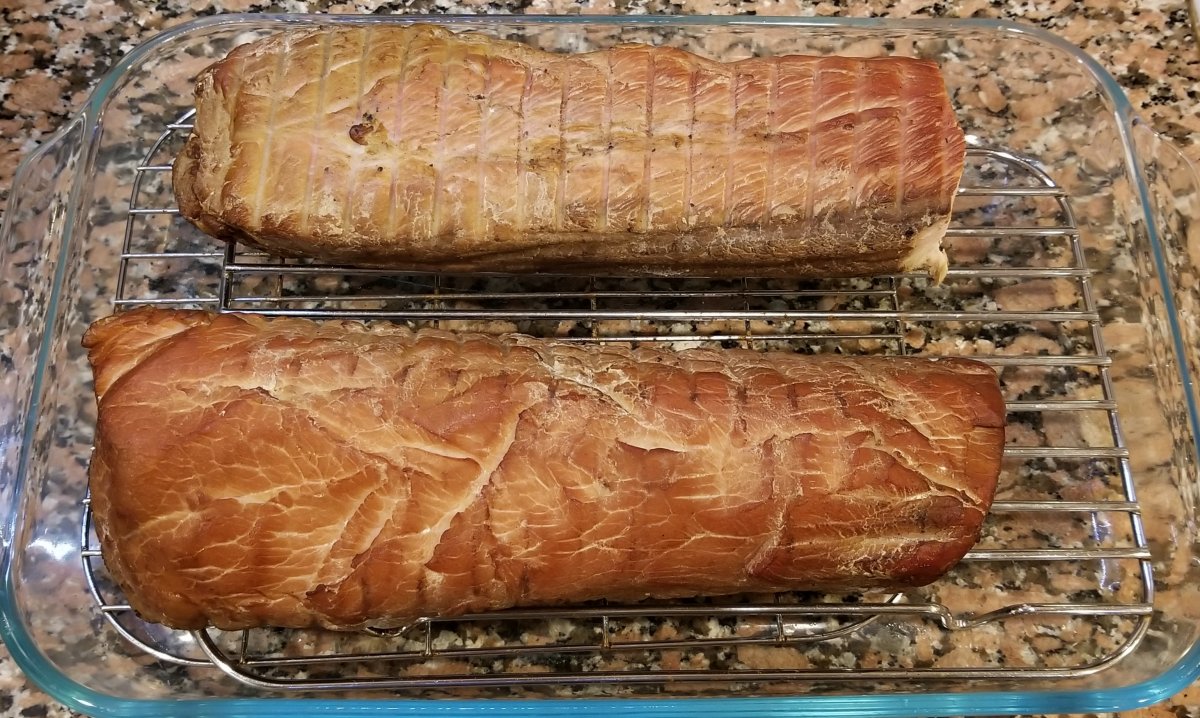 Damn now I need a smoker

Check Dullmart & etc. for end of season sales, should be happening by now- I spent less than $25 at end of season on this little charcoal fired smoker, near as I can recall. Been well worth it.

Bert2368 said:
Took a slice off of one loin and tasted before reposing the majority in fridge for the night- It is a goodness thing.
Click to expand... 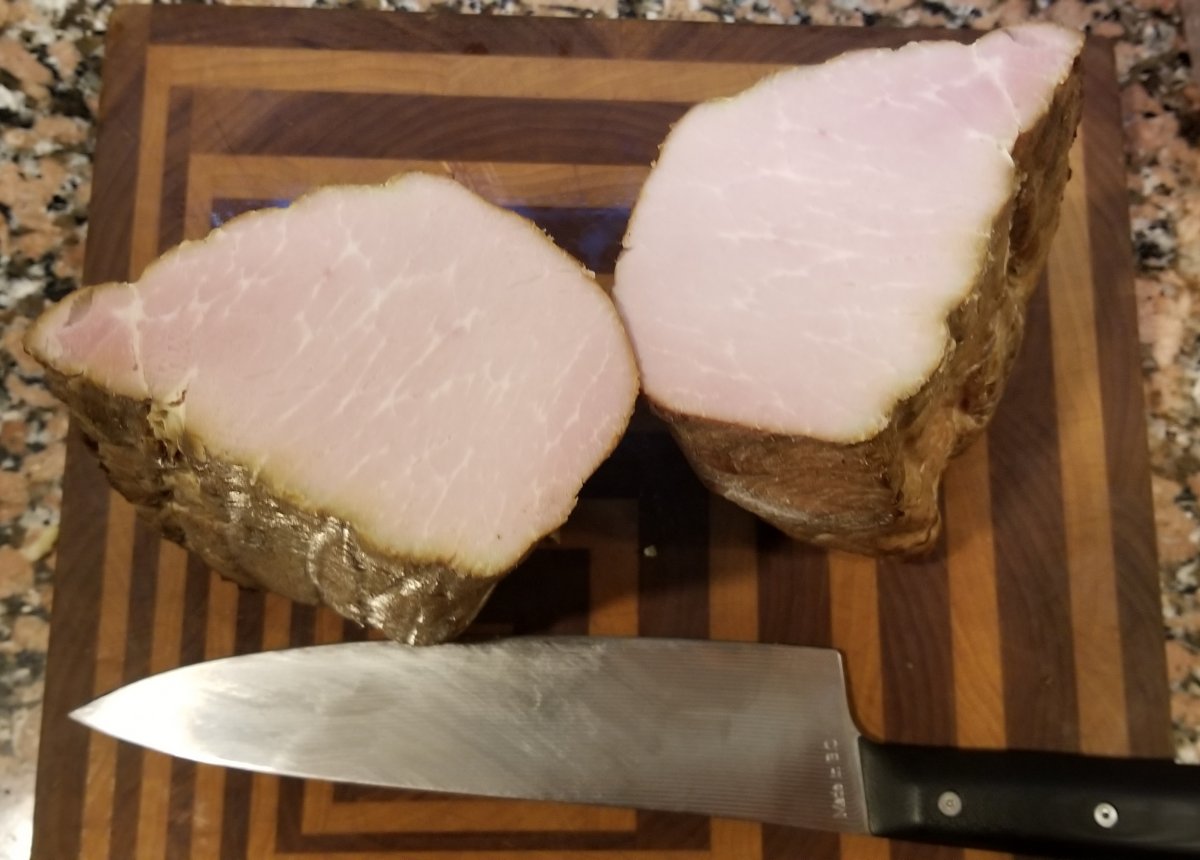