I have 3 stones for sale, if anyone is interested ( I have much more stones than I can reasonably use):

I got this one from Otto few months ago, its a great and very nice brick, but as my main use for middle grits is currently a quick edge refreshing (followed by a finisher of choice eventually) and I use them for polishing rather rarely, I will let it go and try an Aizu instead which should provide a bit more agressive edges (if anyone has a nice one, I might be open to a trade)…Anyway, this one is a great stone, very useful in a polishing progression (I tried it once in a progression Shapton 1k-Natsuya-Kasabori-Narutaki kiita-Nakayama maruka-Nakayama kiita, with great results), has a very pleasant feedback with Atoma-generated slurry, but can, of course, be used also without it... Then it lasts a while until enough slurry is formed and the stones tends to burnish more than to polish and feels actually rather hard (I would compare it to a Lv 4 stone)…The finis his then, not suprisingly, generally brighter and also finer…Edges are, as already mentioned, a bit less agressive than from an average Aizu or e.g. my Aoto, but still pretty toothy…Link to a gallery with quite a lot for pictures is here: Kasabori – rhamphorhynchus – album na Rajčeti - there are some photos with and without generated slurry, I think its no problem to find out what is what…

Got this one about 6 years ago from Shinichi Watanabe, it was one of my very first naturals, I got it (with a significant discount) for 88 000 JPY, with a pretty simple description: „Ultimate shiro suita“ …OK, I was unexperienced that time and probably wouldn’t pay that much for it again, but still, it survived since that as the only natural I got during that period, all the other pieces have already been replaced by newer acquisitions…I believe, Maruo suitas don’t need any special introduction, they are pretty easy to use stones, even for beginners, this one is no exception…Examples of the finish the stone is capable to do are in the gallery a link to which is here: Maruoyama shiro suita from Shinichi Watanabe – rhamphorhynchus – album na Rajčeti

There are also some photos I wouldn’t include to a gallery nowadays (like those from the Yoshikane hakata), but for some reason I can’t delete them…Recent photos of the stone are at the end, as can be seen, there are some slightly protruding su at about 25% of the surface which may cause occasional scratches if polished also on that area, but still, if it is avoided, a nice kasumi can be achieved pretty easily…Edges are rather toothy, pretty ideal for general kitchen use, just cut some tomatoes after finishing on this stone and the knife just flied through them…

Honestly, although this has been sold as a Nakayama and also the kawa looks pretty Nakayma-like to me, its a bit less fine than any Nakayama I have ever tried has been, but, of course, not all Nakayama stones are necessarilly super fine and hard …Anyway, whatever it is, it is a great, user-friendly allround stone - large, pretty, consistent, with no toxic lines or cracks (none of the lines or namazu can be feeled significantly or causes a problem) and a great feedback (particularly once enough slurry is built), it makes a very nice kasumi pretty easily (just be aware that its necessary to add a bit of soda to the water used for polishing to neutralize the acidic reaction of the stone; but I think most experienced people here do that as a default already) and gives nicely agressive, useful edges, comparable to those off the Maruo suita. I have sealed it in the meantime to prevent any potential problems, as mentioned, its no super dense stone…

Link to the gallery of this stone is here: Nakayama tomae – rhamphorhynchus – album na Rajčeti

Btw., I also have a 312 g piece originating from a Lv 4 vintage Nakayama kiita maruka (my 1 year old has dropped it - fortunately not on her head - when I was sharpening and just went to the toilet for a moment), its the larger one depicted on two of the pictures, if someone would like to use it for making fingerstones (they are of excellent quality, as was the stone itself) or as a nagura, just let me know and we can discuss the options; the above part of the stone survived the fall fortunately, but I still consider to keep a part of this piece as well, maybe as a nagura…The link to a gallery of this stone is here: Vintage Nakayama Maruka Kiita – rhamphorhynchus – album na Rajčeti - at the end, there are some examples of the finish after using the FS…

Hopefully I mentioned all the important information, but anyway, should anyone has a question or would like to know some additional info, let me know! I am located in the Czech Republic, insured shipping using Czech Post will be around 20-25 USD within Europe and about 10 USD more to e.g. USA… 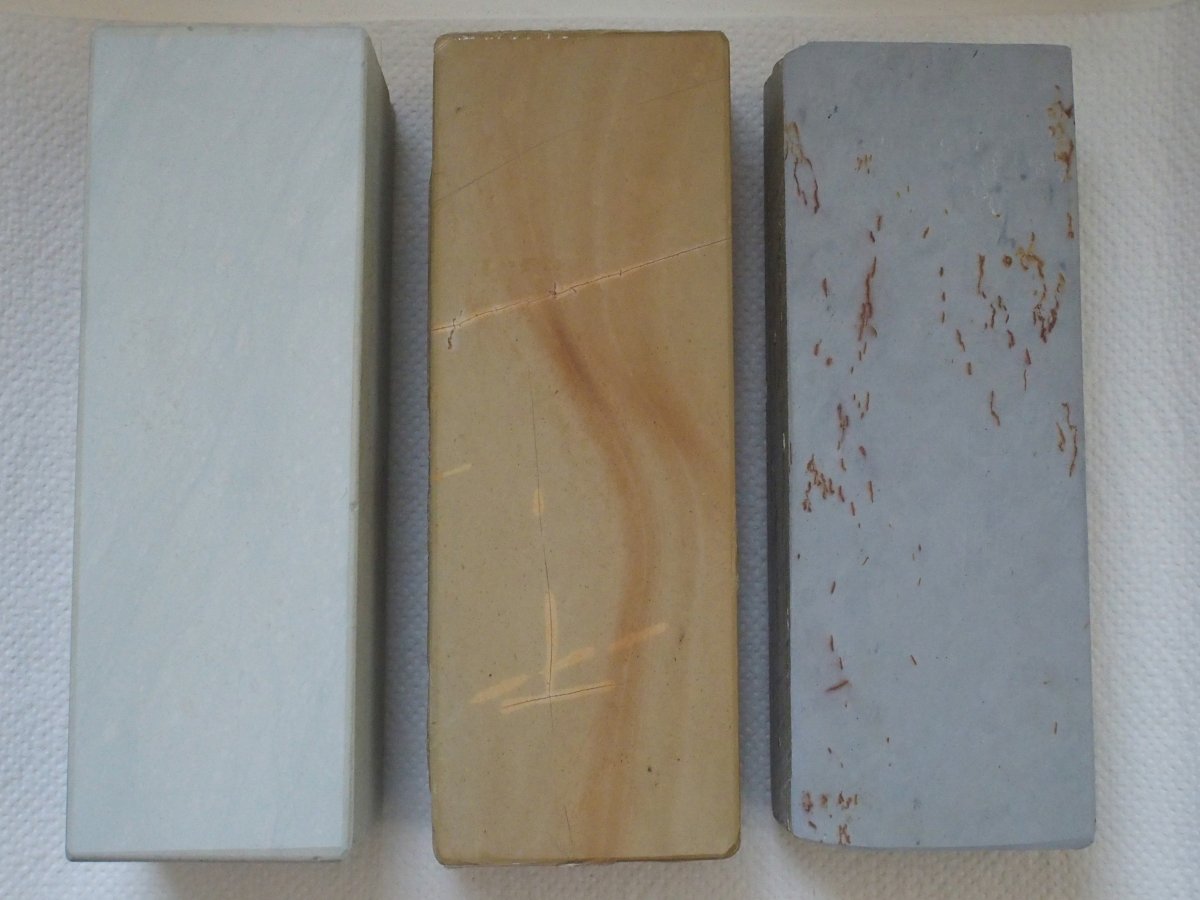 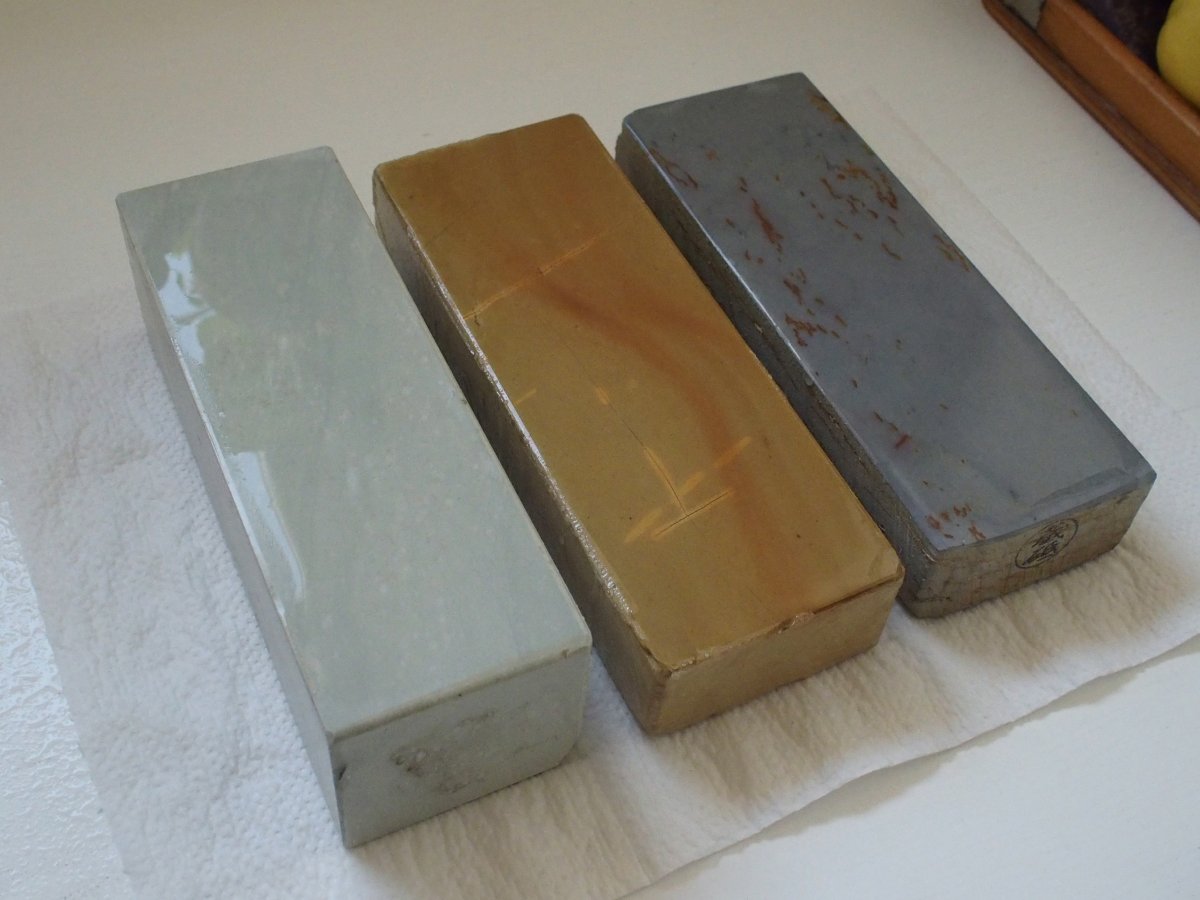 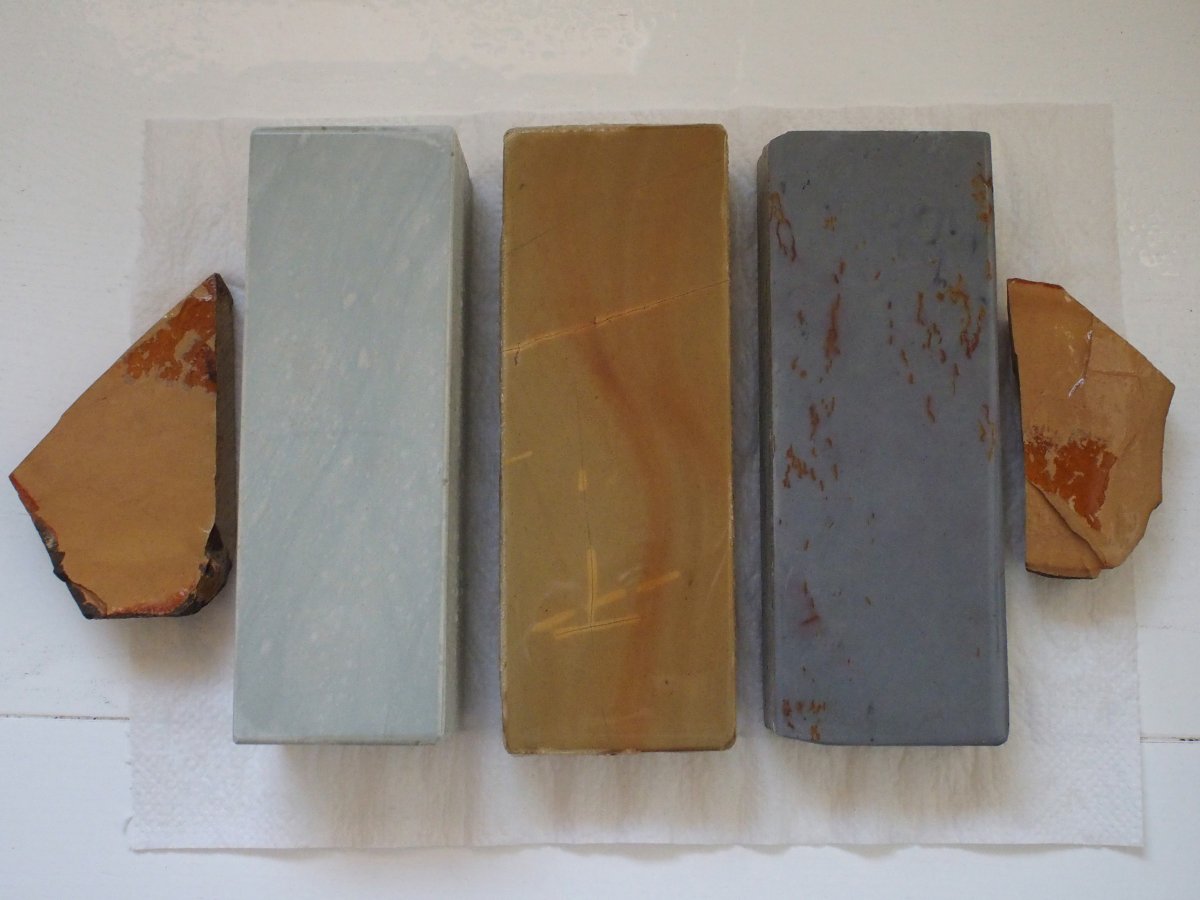 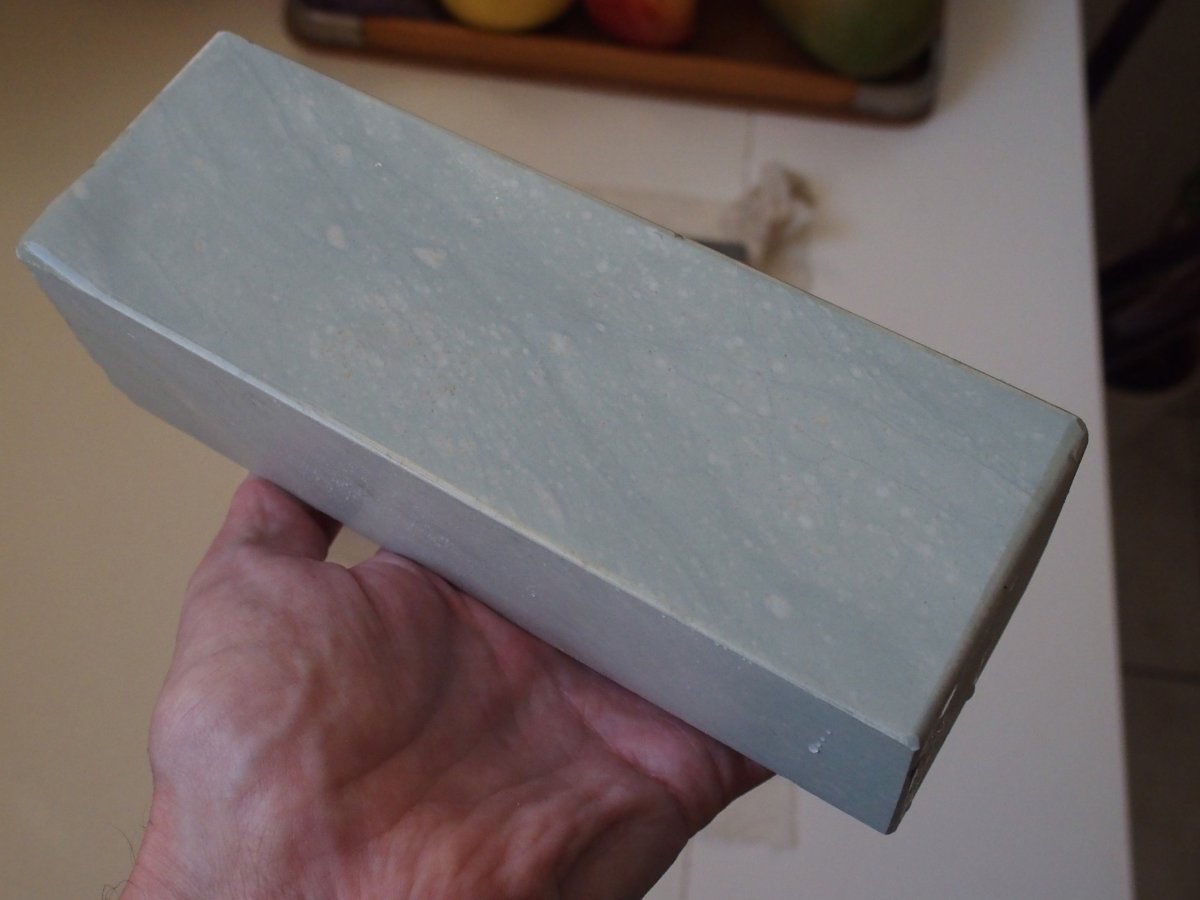 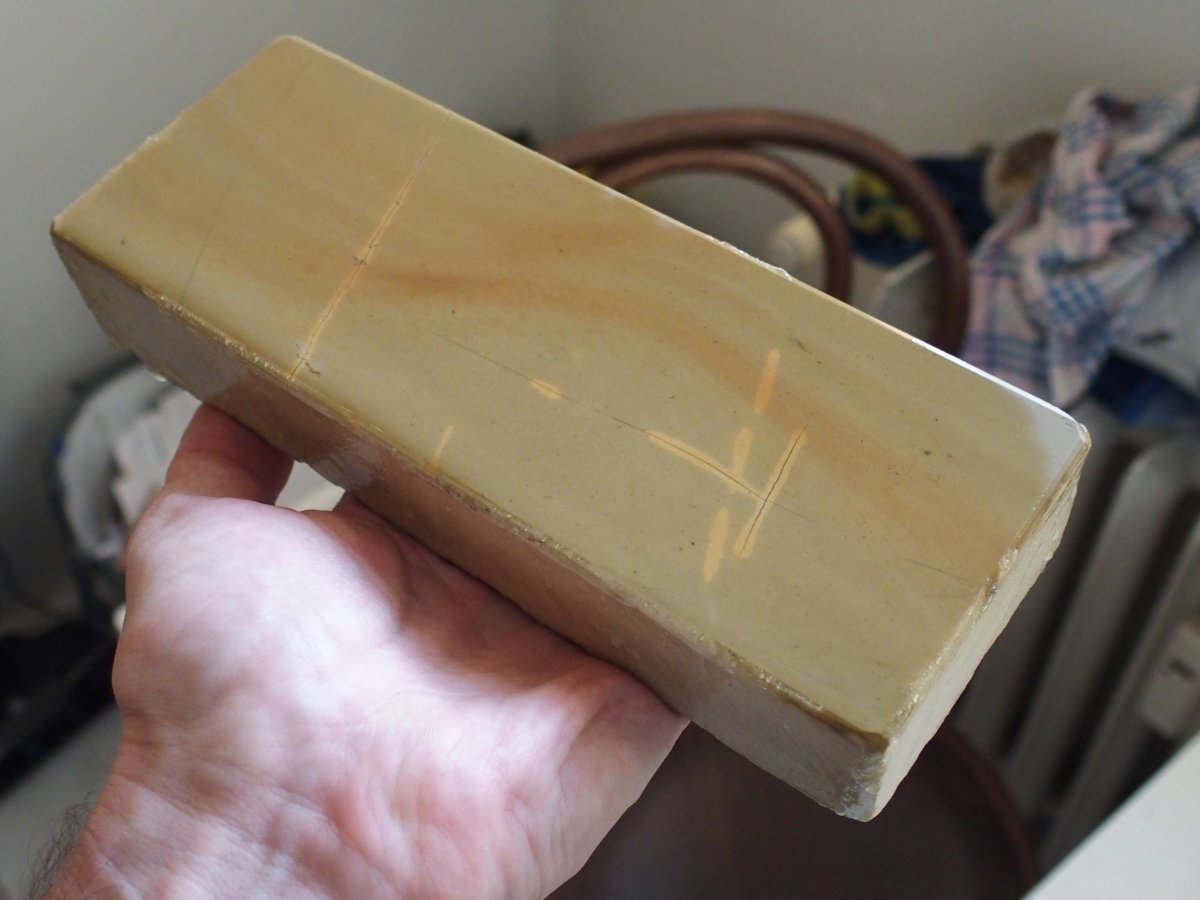 None of the maruka pieces is available anymore...
K

Update - Kasabori is sold as well, just the Maruo and Nakayama remain, if someone likes any of them, just write me a PM and we can discuss, I can eventually also provide some additional videos, pictures, etc...
K

The Nakayama IMO works best with a little bit of slurry, generated by a fine nagura, then it becomes a monster, as regards the cutting speed...Its really very fast and the feedback is super pleasant, kind of creamy, with super easy water management...Here are two videos showing the speed on two different knives:

And here are some videos showing the finish starting the stone like that, again on two different knives (sorry, sometimes the camera had a problem to focus properly):


And, after using it quite frequently lately, I should also correct a bit that what I wrote about the stone in the original post...It definitely IS fine...what is also quite obvious from the finish of the cladding for instance on the Munetoshi which is very clean and fine (the stone doesn't burnish, at least not the cladding, but provides a clean, fine polish)...My initial impression that its not very fine was probably caused by using it relatively freshly after trying to raise the slurry with (quite new., i.e. quite sharp) Atoma 600 which obviously disturbed the surface of the stone so that it appeared then coarser than it actually is...And I also mentioned that if no neutralizing agent is used in the water used for polishing, some flecks may occur on the knife polished...Actually - in the mentime I used it several times without adding anything and it was no big issue and the finish was basically as clean as with adding a bit of soda...

For what it's worth - I know the OP personally and he is a stand-up seller.

Will the Nakayama self slurry? I expect the Maruo would right? Pictures of Maruo finish would be great.
Last edited: Jul 28, 2022
K

gbupp said:
Will the Nakayama self slurry? I expect the Maruo would right? Pictures of Maruo finish would be great.
Click to expand...

Yes, of course the Nakayama will selfslurry, its a fine stone, but not particularly hard (which is a not that common combination), about Lv 3,5...There is a plenty of photos in the gallery a link to which has been put into the original post, there the stone has been used with water only...But it acts pretty similar with the slurry raised by the fine nagura (like I posted in the videos above), as regards the feedback and the resulting finish, creating a bit of slurry just speeds the things up a bit - but is not necessary at all...Its just my favourite way how to use the stone...But you just save maybe a few tens of seconds doing that...

As for the Maruo - this, of course, selfslurries as well, as regards photos of the finish, quite a lot of them are in the gallery I also mentioned in the original post - but to make it easier for you, here are links to both galleries again:

There are some rather old, but also some quite new photos of the finish...But if you want, its no problem try to make some totally fresh ones
I didn't play much with the Maruo lately, but as regards the Nakayama, I can in full honesty say that the more I play with it, the more I like it...
K 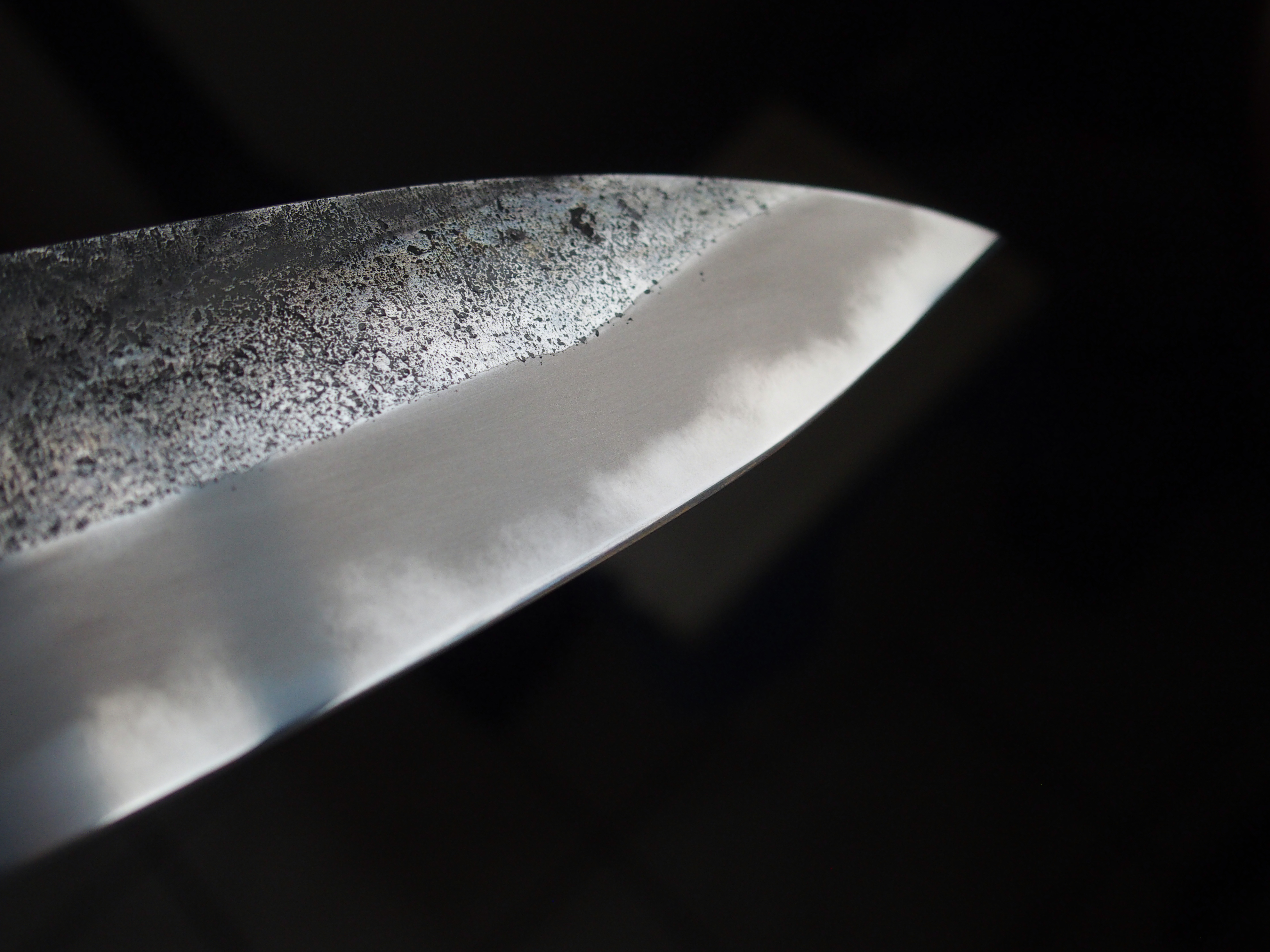 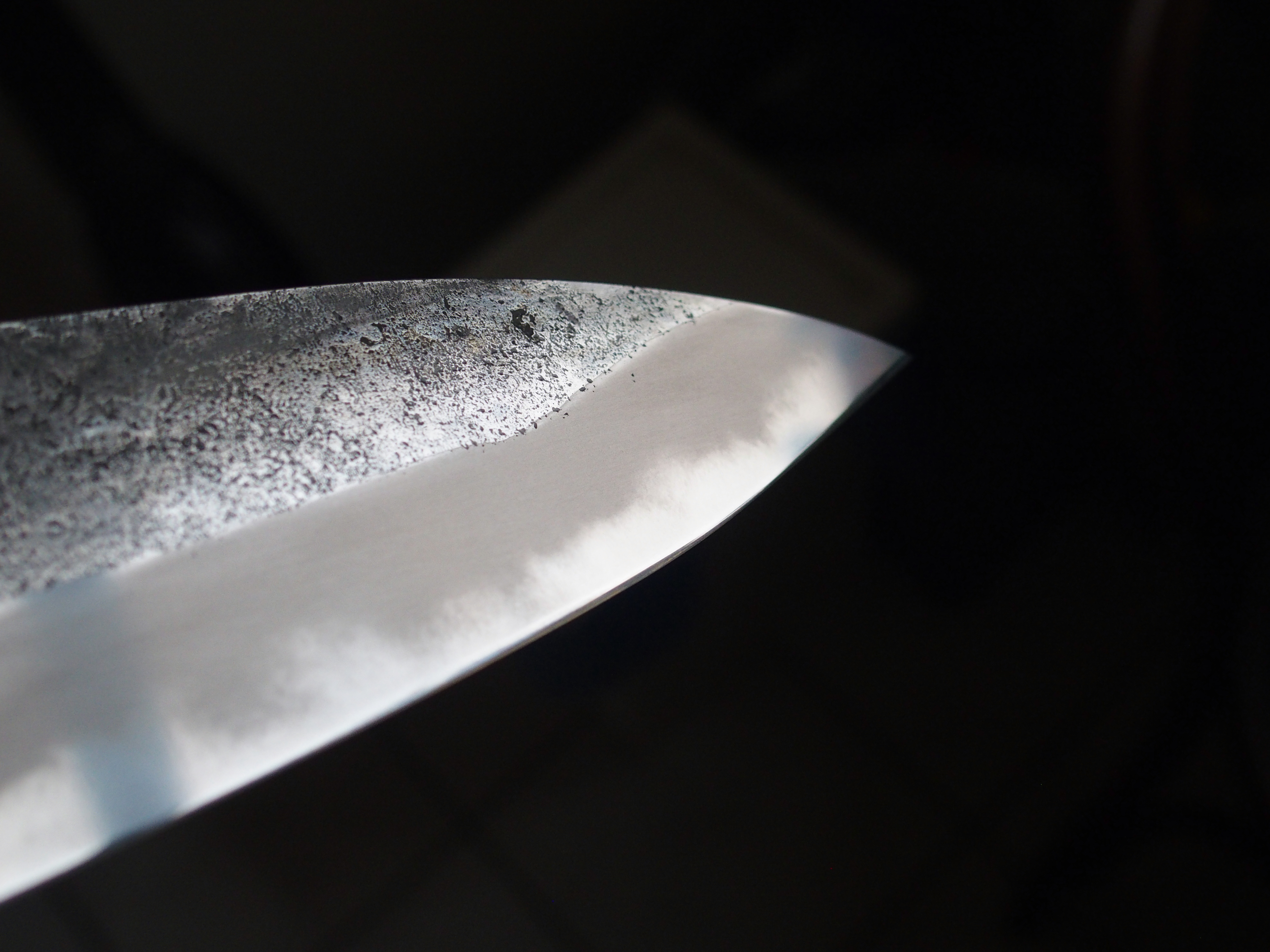 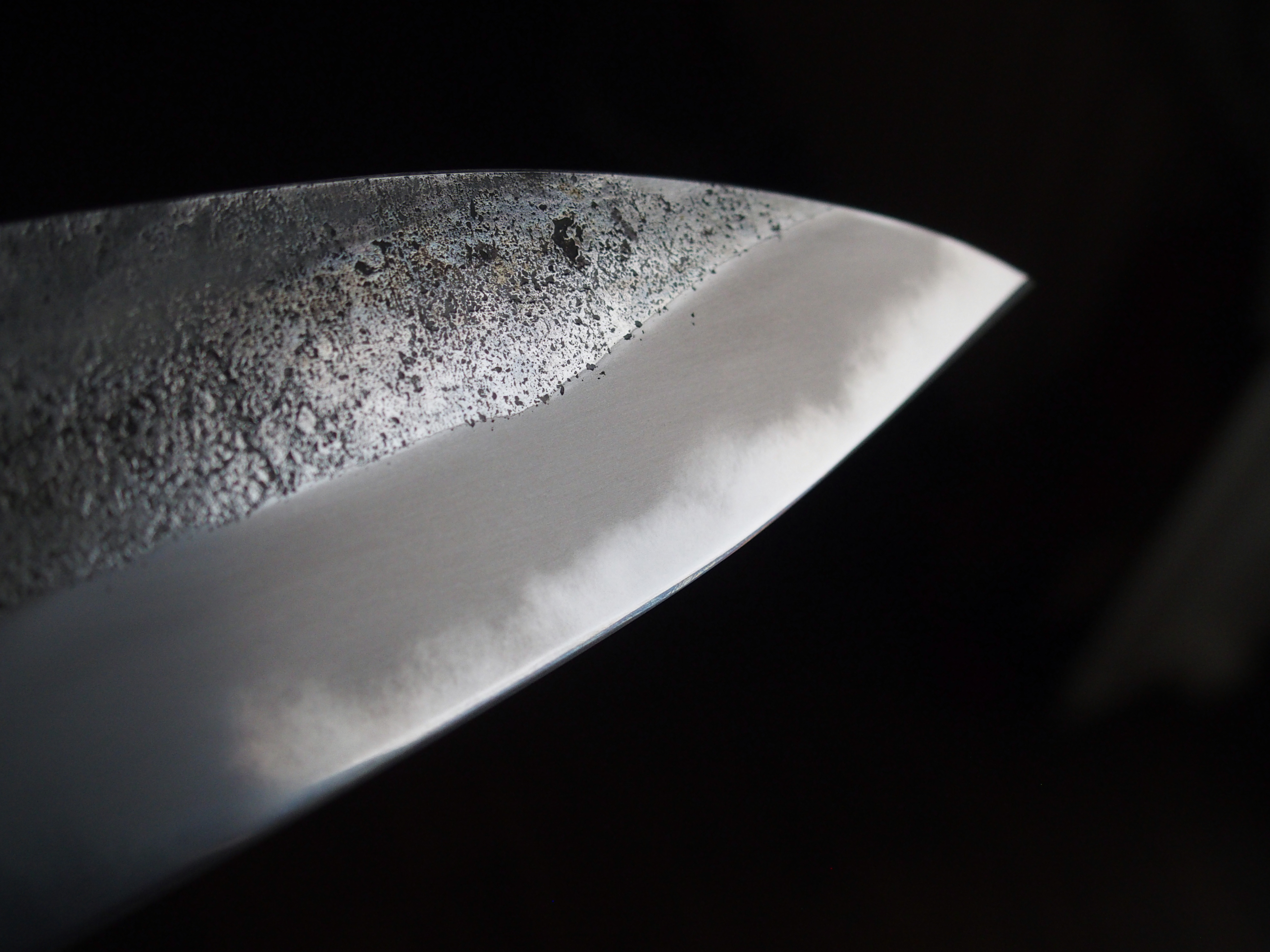 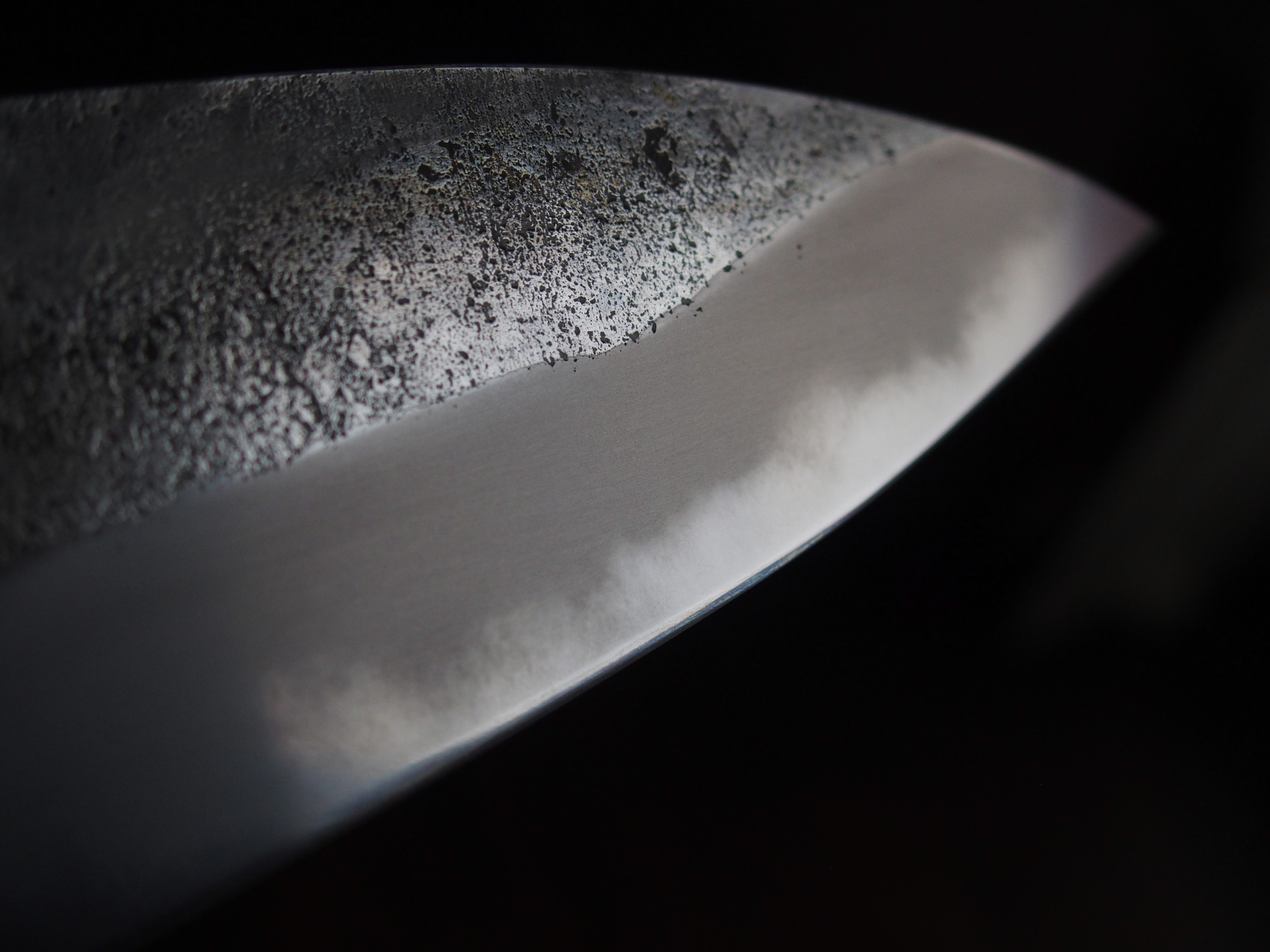 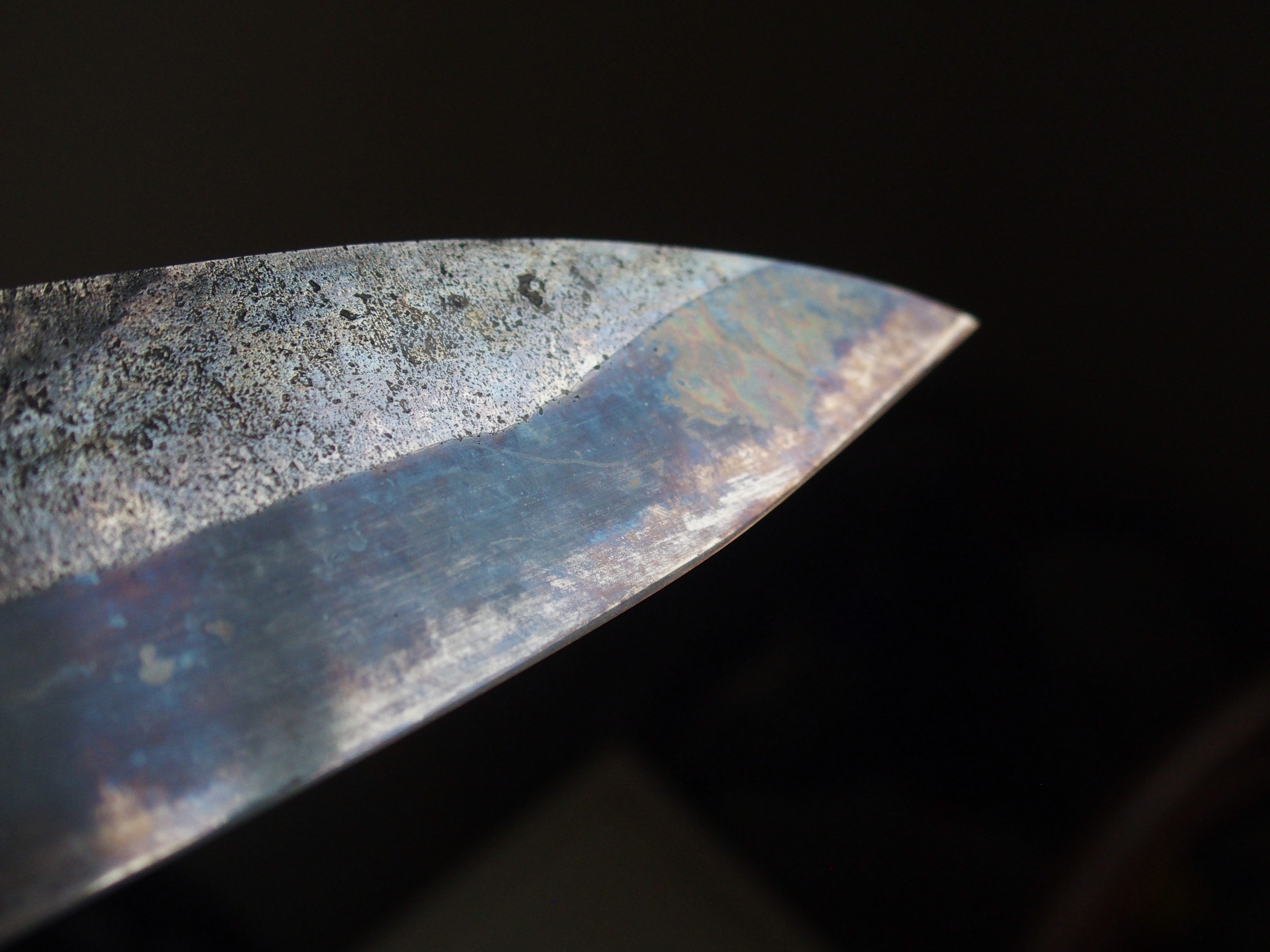 I played today a bit with the Maruo suita, here are some photos of the finish as well as one of the knife before I started...And I will also add a link to a video of the finish:

I also lapped the stone a bit, it needed to be flattened anyway, the protruding su which I mentioned in the original post dissapeared almost completely, there is just one very small area with them left currently... 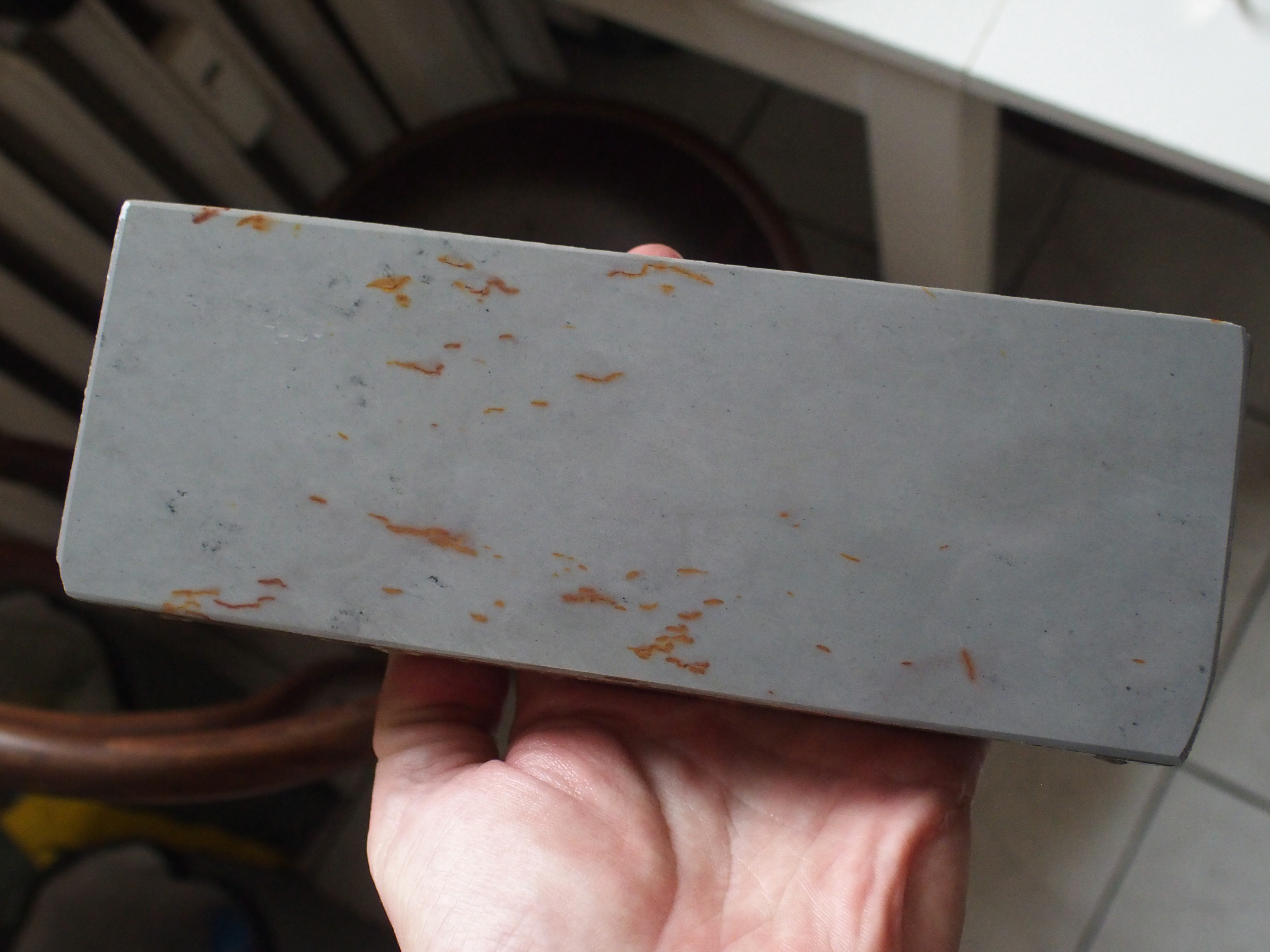 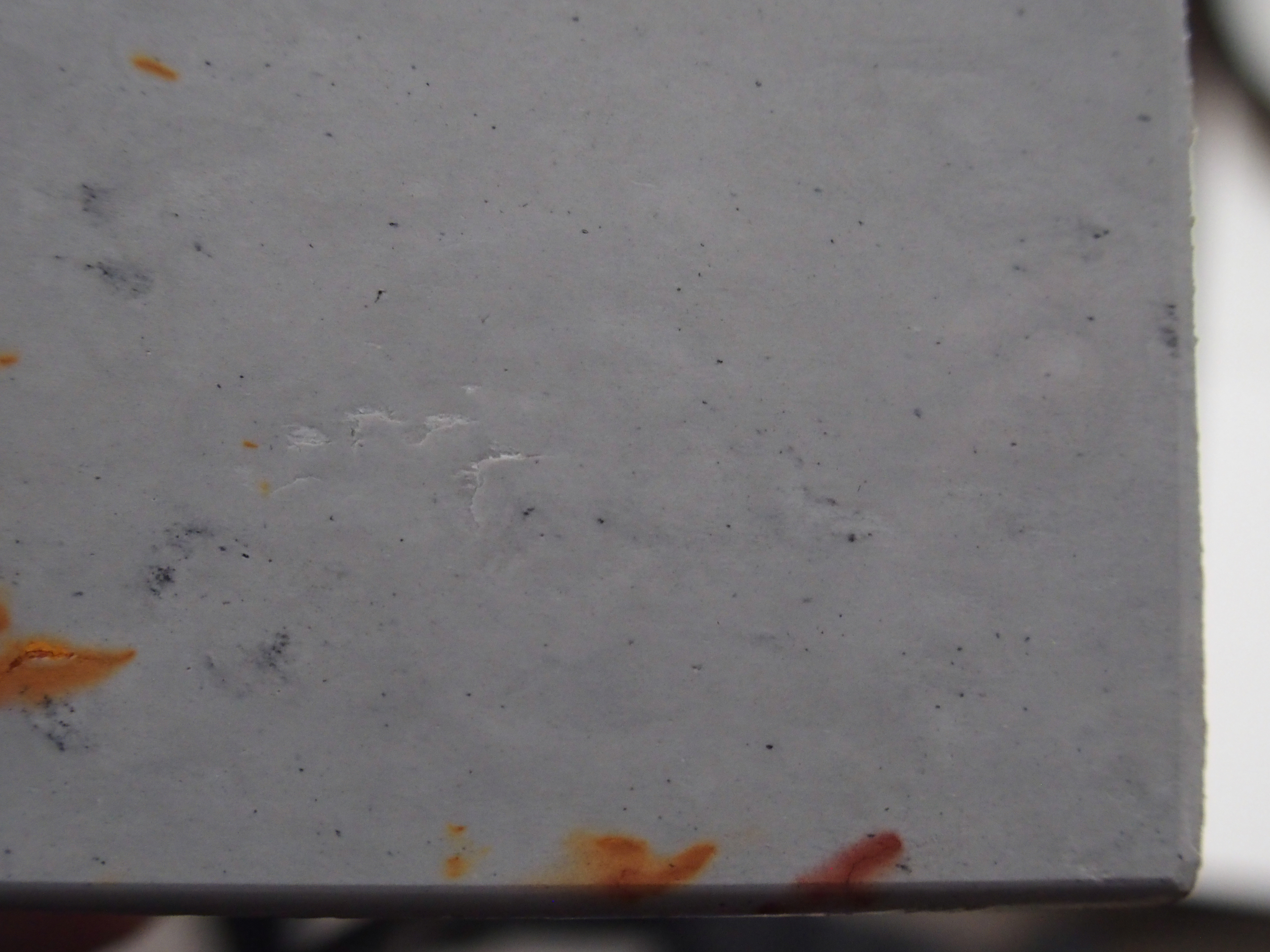