I am really interested in trying out some Western makers without spending too much or waiting too long, Shi.han just restocked some 52100 KU and Fredrik Spåre MCX is coming next week. Since both of them are highly regarded in the forum, which one would you recommend and what are some of their strengths? I am kind leaning towards Shi.han since I do not have experience with heavy Workhorse type of knife, but the MCX Honyaki is really tempting too...

I haven't tried a Spare. Shi.han's work is impeccable. Outstanding fit and finish. Capable of taking a very keen edge. Tough enough to never have to worry about it. The factory bevel is really a little too tough for me. I did thin it out a bit out of the box especially near the tip. It feels pretty good on the stones, not my favorite, but nothing too annoying. Deburrs easy. The 52100 takes a really nice patina. The KU is subtle, understated, and permanent. It's real burn scale and not paint. His grinds are excellent. Nice old school full convex. The one complaint I have with mine is the neck is too long. Kind of a minor squibble. But I do find it annoying and will probably order a custom some day that is basically the same knife except slightly pointier and a longer handle with a shorter neck. Although I pretty much already have a knife like that except made by HSC. The Shi.han is on the left. HSC on the right. I have heard very good things about Spare's knives from people I trust. But you can't go wrong with a Shi.han. 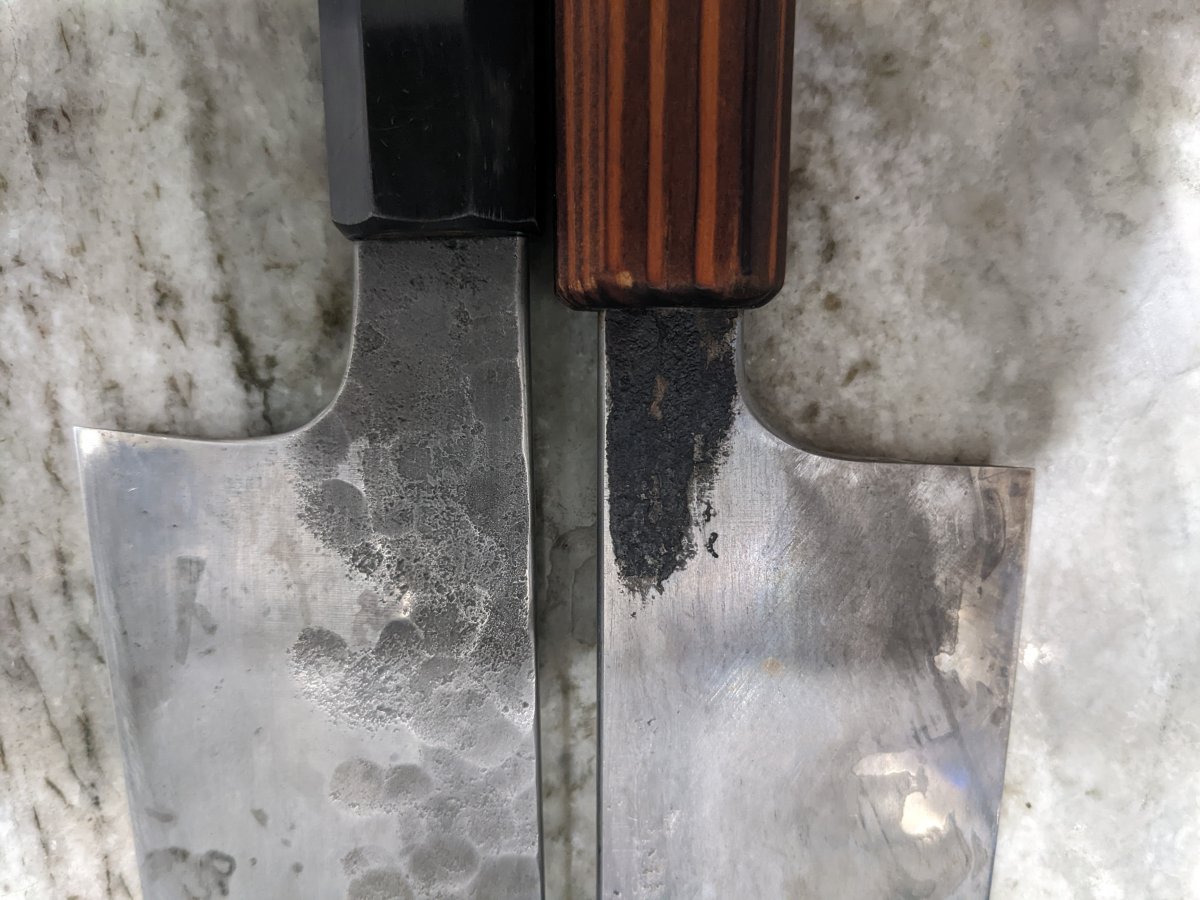 Shihan is excellent but I would not describe it as heavy workhorse.

Everyone should give Shi-Han's steel a try.

I have a 230 from the first MCX batch and just sold a 210 52100 Shihan. Both good knives but very different. The Shihan is extremely robust in hand--maybe not the heaviest of workhorses, but very much a workhorse all the same. Feels very dense and indestructible, and while I didn't put it through the wringer you could definitely use it roughly without worry. Sharpens up well but didn't feel as nice as other 52100 I've tried on the stones.

By contrast, the MCX is thinner, more fragile and delicate for sure, lacks a bit of the heft of the Shihan but is definitely a better cutter IMO. Thinner behind the edge and more chip-prone--this is probably the knife I baby most in my collection. The tip is extremely thin and pointy and one of my best for fine work. The shield shaped handle is very nice.

Both have good fit and finish but in different ways... the Shihan a bit more elegant, the Shihan a little more evidently handcrafted (but not at all in a bad way).

Given that I sold the Shihan and kept the Spare, that's sort of a revealed preference there, but if the Shihan I had was in my preferred 225-250 range I almost certainly would have kept it. If you can swing it, try them both!

Spare is better value for money.

Shi.Han is more to my preference. Bigger, heavier, tougher in every way, and the thermory ash handle is the only thing Ive tried I like better than burnt chestnut. people are saying they dont like his 52100 on the stones as much and OK sure but in use it's incredible. Very very durable, good edge retention as far as these things go, slow patina formation and very stable.

The Spare for me is more something to use on special occasion because the tip is SO thin. With the Shi.Han I will blast through stuff without worry.

I honestly believe the 240mm 52100 gyuto that Shehan makes is the best overall compromise in the knife market and so while the price at 550 certainly isn't inexpensive I think it's well, well worth the ask.

I've not had privilege to try many different 52100 blades but I am lucky enough to own a Shi.han 240 Gyuto, which has served me very very well over the past couple years both at home and especially in pro kitchens (tough, not too reactive, great edge retention and geometry). Note- my particular gyuto was purchased used and has a custom profile: a little flatter from what I understand from the seller).

Aside from the neck length preference, I agree with Stringer's comments. I have put a lot of work in mine though: thinned and sanded/polished to near mirror. For me, Shi.han has the je ne sais quoi (also a lot I can sais qoui), and it just works perfectly in the hand as an extension of the body.


timebard said:
Sharpens up well but didn't feel as nice as other 52100 I've tried on the stones.
Click to expand...

Who would you recommend, that has better feeling 52100 on the stones?

I think Shi.han makes one of the best all around knives out there. Great fit and finish, rounding of spine and choil. Traditional forging that I love, great steel and heat treat. They feel pretty bullet proof and handle all foods really well. My issue is that I found it boring. I want my knives to wow me. Weather that is cutting action, food release, edge retention etc. I never got any of that from Shi.Han. I am not bad mouthing him, great guy, great knives but I would go for the Spare to see if there was a wow factor or decide what the "Wow factor" I am currently looking for and go for that.

SilverSwarfer said:
Who would you recommend, that has better feeling 52100 on the stones?
Click to expand...

Kippington and Prendergast 52100 both feel better and touch up easier IMO. And to be clear, Shihan's doesn't feel terrible or anything, just not as nice. I imagine this is a trade-off to the extra toughness of Shihan's heat treat.
K

I’m a bit of a Shi.han fanboy, so take my words with a grain of salt. I’ve had my Shi.han in A2 for a while and have used it a lot. I’m not one of those people who can really distinguish how a steel “feels on stones”, but I’ve used enough knives to get a feel for my preferences when it comes to steel and sharpening/edge taking and Shi.han’s A2 is one of my favorites; deburrs super cleanly, holds its initial edge very well and stays extra toothy after extended use while not being too hard/brittle. I haven’t tried his 52100, but I did a lot of research on the forum before I bought my Shi.han and saw many posts from people who’ve been members a long time and have used a lot of knives in a pro environment and they all love it.

I think the durability aspect of his knives is kind of underrated even though everyone mentions it because most people here don’t need a knife this tough. I wouldn’t hand one to someone with no experience with nice knives and let them hack away at a chicken or something, but in a pro environment where it will see some abuse or you might leave it on your cutting board and someone else can pick it up to cut something real quick, I think a Shi.han would be my first choice besides a true “beater” knife like my Dexter-Russell Chinese cleaver. I once used my Shi.han to chop up a big slab of crispy roast pork belly that still had some small rib bones embedded in it that I didn’t see. The bones been softened a little from roasting for a couple hours, but any other nice knife I owned would’ve chipped pretty badly on contact. The Shi.han went right through them and ended up with three small deflections in the edge near the heel that came out after maybe two sharpenings.

I haven’t tried a Spare, but I follow him on IG and his knives look great, I really want to pick up a cleaver from him some day. His knives definitely look thinner overall so you’re likely trading some food release for a bit of ease of cutting, although in my experience, the Shi.han cuts better than some of the choil shots suggest.

I don’t know if Spare is taking orders currently, but he seems to have a pretty high output of knives to choose from. If you don’t want to pick up a stock Shi.han, you can ask about custom specs and profile and it’s usually only a couple months wait at no additional cost.

Here’s a cutting video I took if you want to get an idea of performance. Like @stringer and @SilverSwarfer, my Shi.han has been sharpened and thinned some to maintain the geometry. The original grind, a slightly asymmetric convex, is slightly altered, but still mostly intact.

Thank you guys for all the advices! Seems like a really hard choice, Timebard also mentioned Kippington workpony which is another knife I’m interested in but not available now, I might wait few days for more details on the MCX then decide since there are some changes in the new batch.

EricEricEric said:
Buy both then sell the one that didn’t make the cut
Click to expand...

Might actually do consider how quick they sold in BST.

Have both … would give the edge to my ShiHan. The Spare is nice and there is a place for it in my kitchen but my 52100 ShiHan Gyuto is sweeeeet. Never fails to put a smile on my face when I pick it up. YMMV.