Answering some questions from another thread here but thought I'll make this into a new thread so people could find it easier by the Title.

The stone was labeled as a "YAMAICHI SHOHONZAN" but Badgertooth pointed out that it's a Shoboudani which MM sells on his eBay. Link to the stone on MM: http://www.metalmaster-ww.com/product/628


Badgertooth said:
Funny enough, the only one I ever tried was from MM. Cheap but good and probably doesn't get enough time in my sharpening rotation. Not as soft as I thought it'd be at level 3.5 but that's not an issue. I'd still be keen to try the big level 3 he's got.

Asteger said:
I have/have had several. One of the very knife-friendly finer stones, for sure. Generally easy to use, not too fine, good for finishing. Tomae are probably superior to most other Tomae that suit knives. I've heard of some very good suita, but don't own and haven't tried one.
Click to expand...

Thanks, buying from MM can feel like a bit of gamble, you get a good price but he usually won't answer any questions and in this case the stone was even mislabeled. Thanks for pointing out what it really is. I pulled the trigger because of your and Asteger's comments.

I would guess the hardness to be around 3, it's not very hard and produces mud quite quickly, not as much and quickly as an Aoto but much more than a Suita. It feels coarser than my Suita but definitely finer than my Khao Men so I would guess that it's around 5000 which is great for a low level fine finish.

The feeling of sharpening is very nice, for me almost perfect. Smooth but not too muddy, not too soft, not sticky at all, a very nice sound, and a nice earthy smell.

It is quite fast. I've test sharpened on my Herder 58 HRC Carbon knife which is probably my easiest to sharpen knife, so that take that in mind looking at my pics. But the stone is definitely faster than a lot of my other stones: 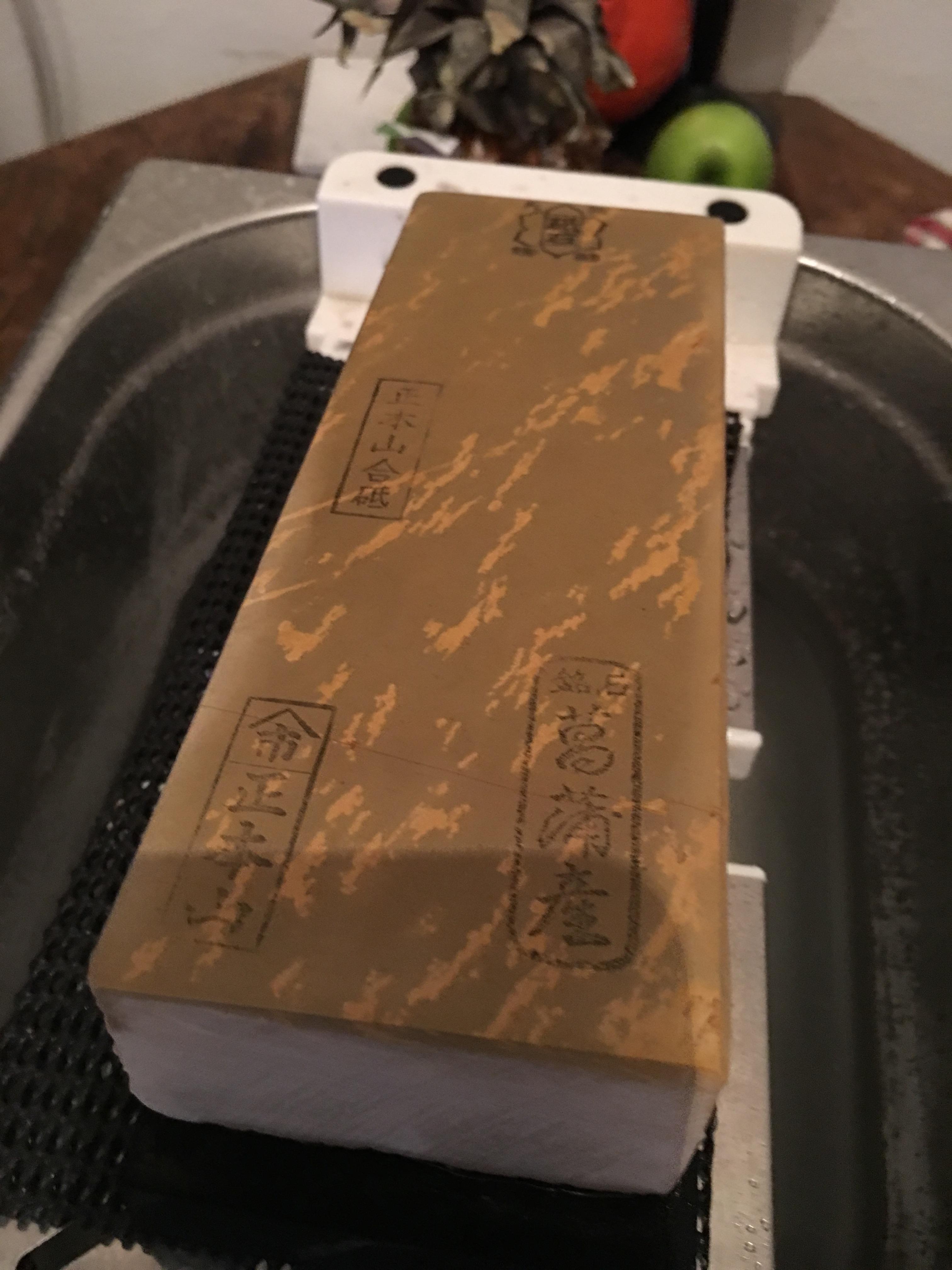 After 20 seconds of sharpening: 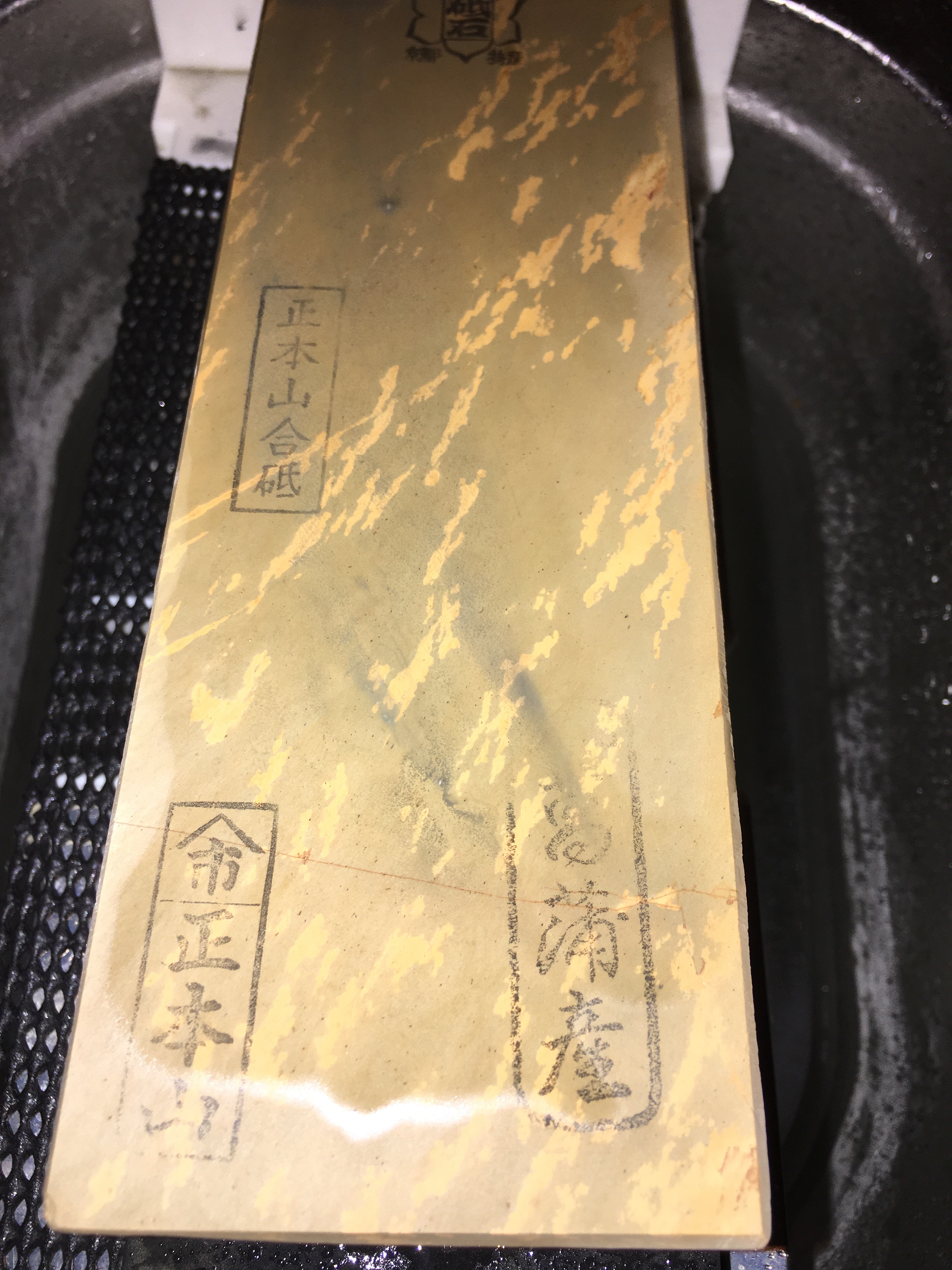 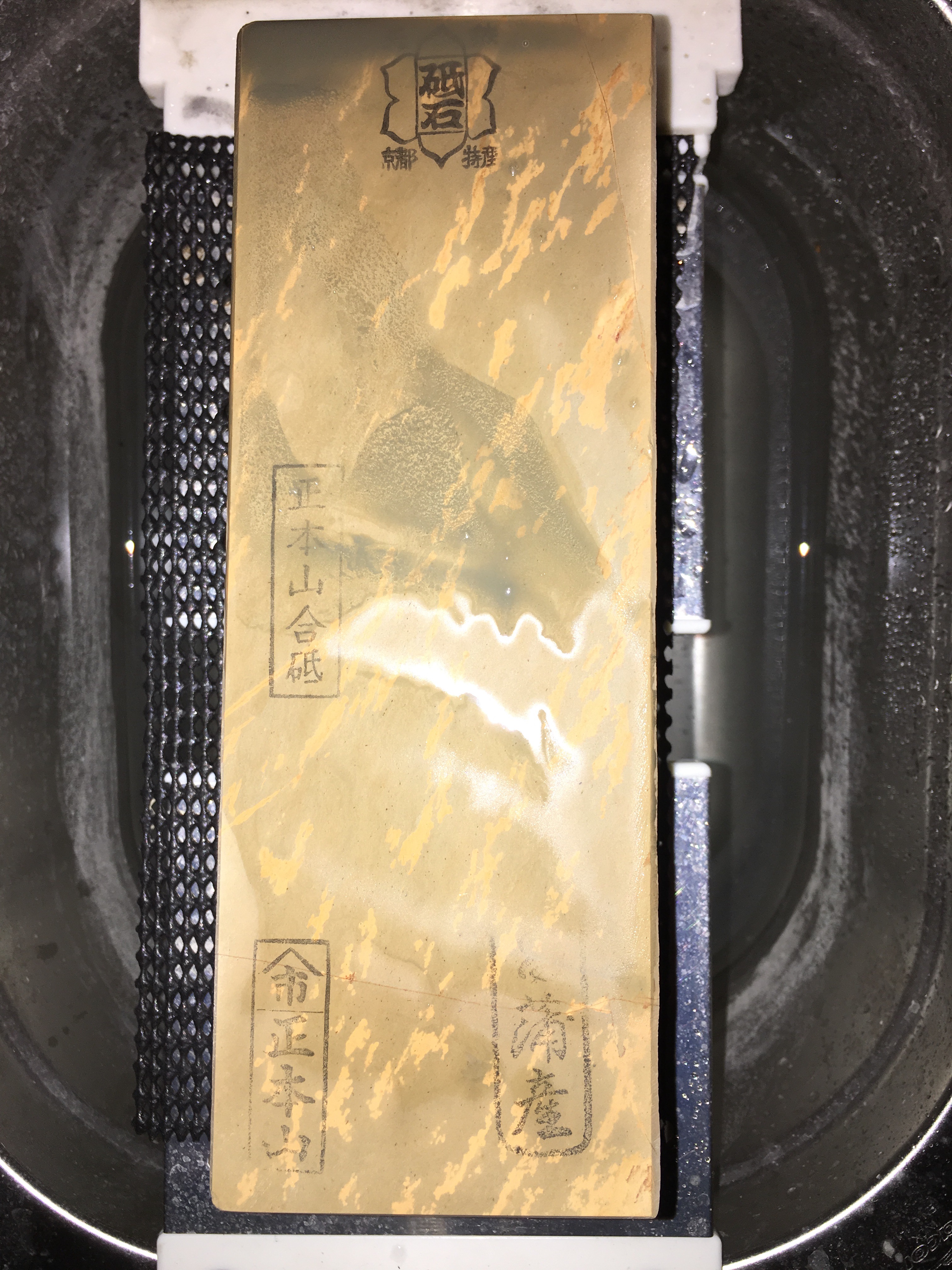 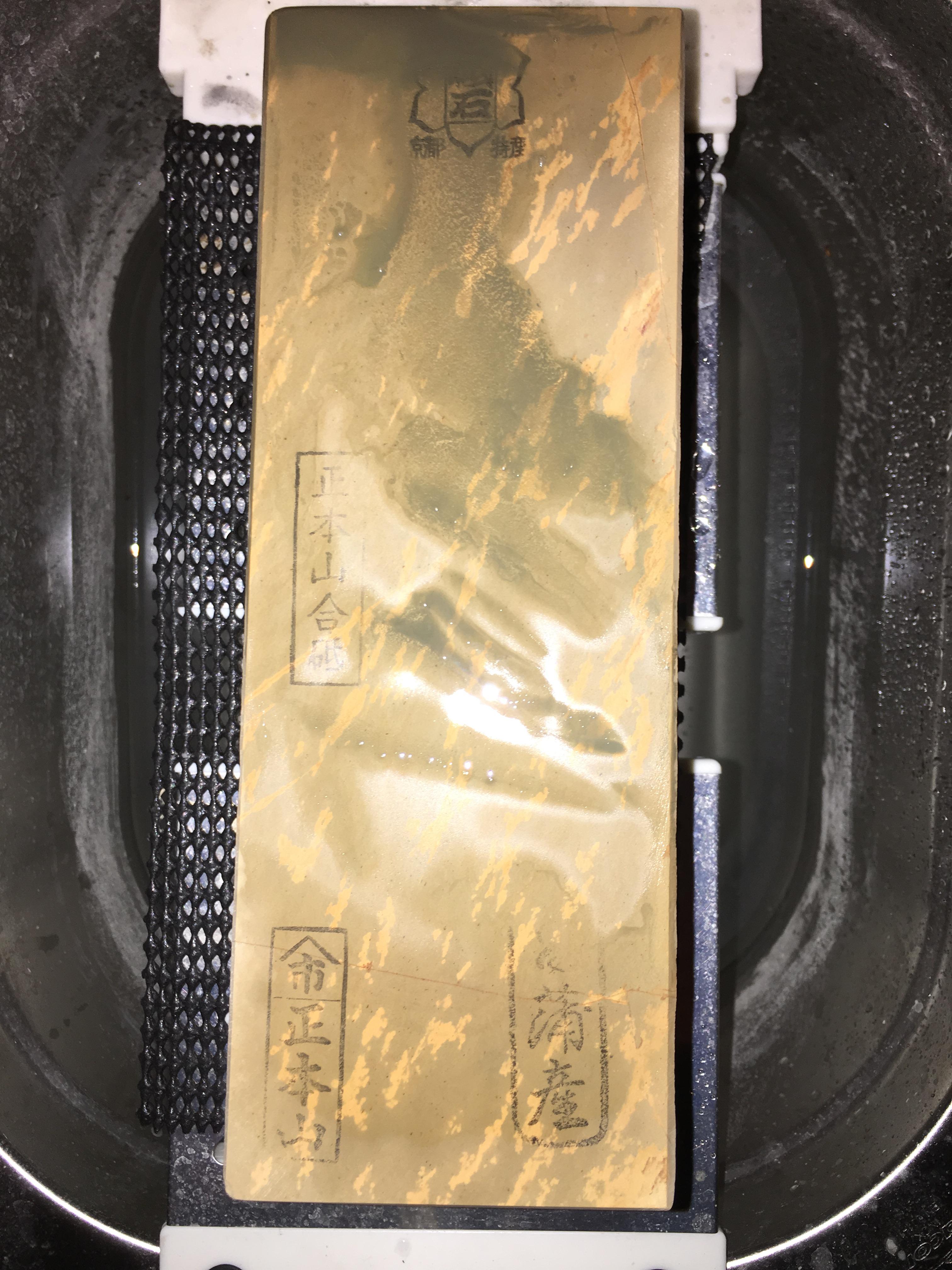 Interestingly, the Shoubudani Tomaes on MMs eBay have three stamps but this one has four stamps.

It's this stamp which is missing on his other Shoubus:

Perhaps it's for the Namazu (Catfish) pattern. Any idea, anyone?

I think the big asterisk that needs to accompany my guess with the mine is that I said it *looks* exactly like a namazu patterned stone labelled as Shobu on his eBay. But this is pure conjecture. But from the way it is behaving for you, it certainly gives credence to Asteger's description. In the end, it is nothing more than a label for a stone that sounds absolutely awesome for knife finishing whatever its provenance.

But you are right, if you compare the other three stamps on the stone, they are exactly the same. I also sent the a picture of the stone to Shinichi who confirmed that it's a Shobu. But perhaps that stamp is the Yamaichi stamp which according to Shinichi is the distributor. This makes even more sense when you compare the stamp to this Yamaichi (which has otherwise other stamps): http://www.kitchenknifeforums.com/s...another-J-Nat-Saw-this-one?highlight=yamaichi

So, I was wrong when I wrote that the stone was mislabeled.

Last 3 of the 4 characters of your last picture just denote 'real mountain'/honyama. Top character I dunno

Great looking stone...I was eyeing this one or a similar one some months back have you tried it out on wide bevels yet?

Nope, just got it today and will lacquer it before I do much more but I think it will probably be fine.

MM has one more similar one: http://www.metalmaster-ww.com/product/627
Although the Namazu pattern is not as nice looking.

Wondering if this is similar to yours http://www.ebay.com/itm/262105772497?_trksid=p2055119.m1438.l2649&ssPageName=STRK:MEBIDX:IT I didn't even notice the one you linked since I tend to look at his ebay store more often than the MM website, though sometimes the availabilities differ

Hard to say, the colours are different. The one on eBay is more greenish so it might be a little harder? According to MM they're both 3,5. The only difference in the charts by him is that mine has a little more "grinding power" although difference might be negligible.

Just snatched up the one on ebay. There's still the one on his normal site if anyone else is interested. Thanks for the review, benny
B

Up to now buying from MM has been a bit of gamble : Some good, most excellent and some awesome Jnats. I like BIG stones and can not afford big ones from other sellers. I pay for the stone not for the service. Up to now only one stone has a inclusion; I sharpen around. BTW I like hard stones and fine Jnats, use synthetics for low grit. I am not able to see any difference between different low grit stone used at the beginning after finish sharpening on fine grit stone.

Ive got a okuda suita from him and it's solid. He's got good prices on knives too.

Smashmasta said:
Just snatched up the one on ebay. There's still the one on his normal site if anyone else is interested. Thanks for the review, benny
Click to expand...

Nooooo that's the one I was eyeing! XD
Hope it's good. Would be curious about how it performs

foody518 said:
Nooooo that's the one I was eyeing! XD
Hope it's good. Would be curious about how it performs
Click to expand...

Gah, sorry foody, didn't mean to swoop in there like that!

I'll post some pics when I get it, but considering I'm still waiting on an order from MM that I placed two weeks ago, it may be some time.

Haha no worries. I'm trying to limit myself to just getting an Ohira Renge Suita during the holidays

For my orders it seems like he only ships out during the weekends. And then add 1-3 or so weeks from there (I'm in the US)
B

bennyprofane said:
MM has one more similar one: http://www.metalmaster-ww.com/product/627
Although the Namazu pattern is not as nice looking.
Click to expand...

Thanks to you and Smashmasta for the reviews...couldn't resist giving this a try.

Hopefully my 4-stamper will be close to the quality of yours (at least functionally, even if not aesthetically).

FWIW I was eye-banging this last night and despite trying to free up some funds, very nearly bought it. I reckon it's one hell of a stone. A smart pick.
B

Badgertooth said:
FWIW I was eye-banging this last night and despite trying to free up some funds, very nearly bought it. I reckon it's one hell of a stone. A smart pick.
Click to expand...

Thanks! I'm picking up lots of great tips from you guys.

Do you still have the Shobudani that is shown in post #1 of this thread? Do you use it very much? Sounds like yours might be a bit harder than the ones benny and smash reviewed? (Though I appreciate such things are subjective to a degree.)

Thanks to you and Smashmasta for the reviews...couldn't resist giving this a try.

Hopefully my 4-stamper will be close to the quality of yours (at least functionally, even if not aesthetically).

Enjoy. Things get really interesting when you throw in the permutations of different naguras (as is almost always the case), but these stones seem to accept and work with a wide variety very easily.
You must log in or register to reply here.
Share:
Facebook Twitter Reddit Pinterest Tumblr WhatsApp Email Link