This is based on a King Arthur recipe, with only minor tweaks: 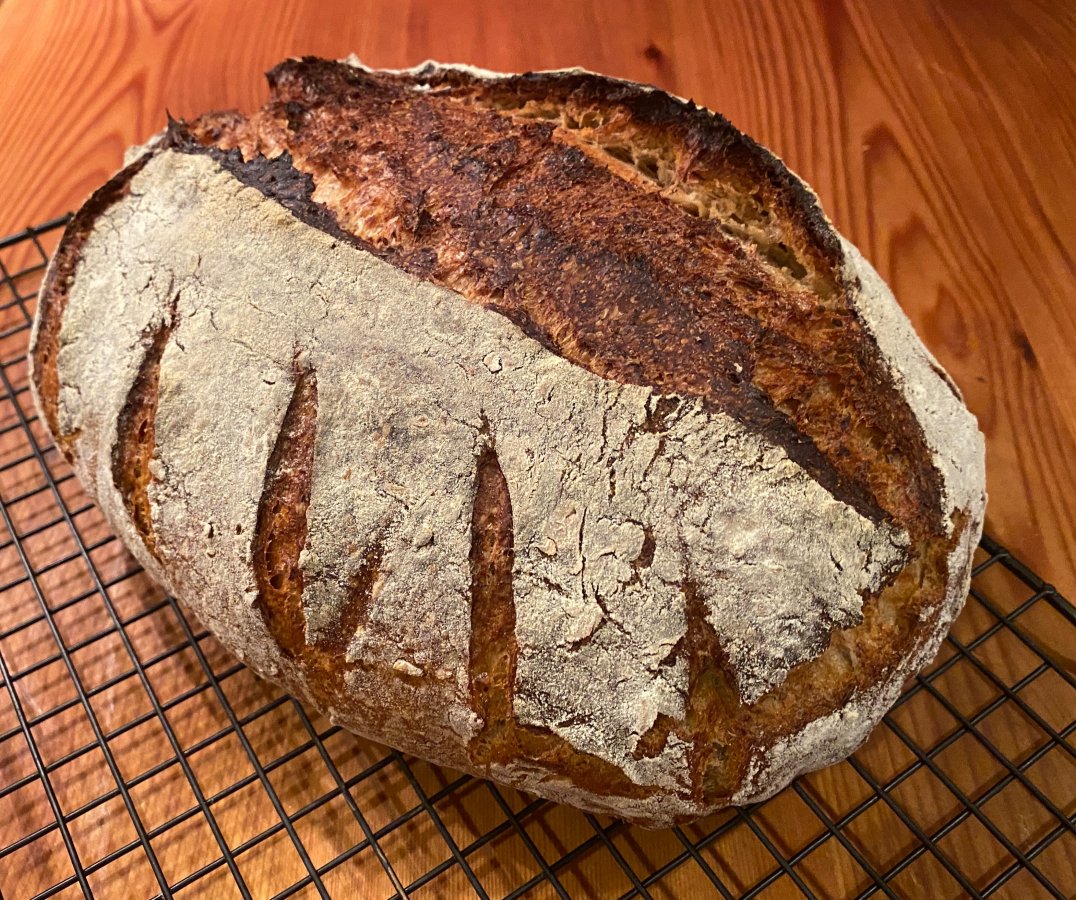 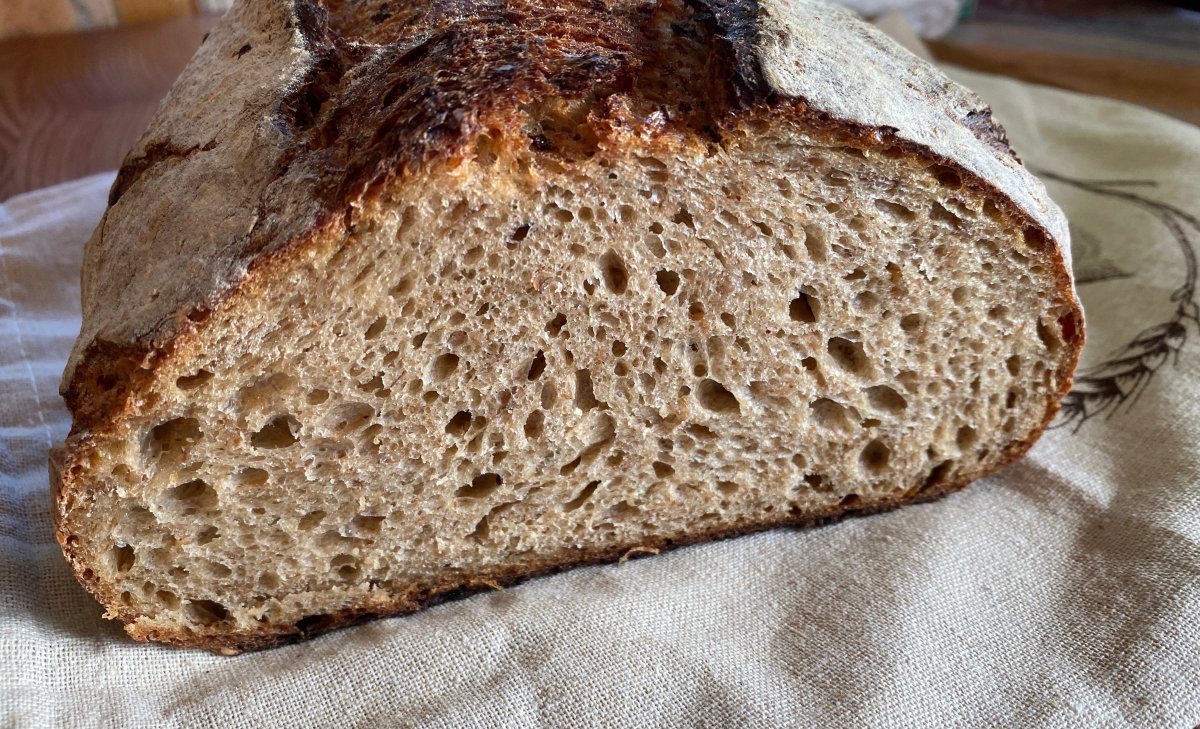 This is a 77% hydration dough, so it’s quite easy to handle. The crumb comes out fairly dense and chewy, with smallish holes. No big Swiss-cheese cavities that way, which is what a German-style rye bread is supposed to be like. Yet, it doesn’t have that really heavy and dense crumb that tends to turn people off German-style bread. (Unlike some other German breads, you cannot use this one as ballista ammunition during a siege.)

Overall, this is a hearty bread that goes extremely well with charcuterie, cheese, smoked fish, and similar foods. (It's definitely no good if you want to eat your bread with raspberry jam…)

The crust on this bread is to die for. The absolute best way to eat it is about 90 minutes after it has come out of the oven, with nothing on it but fresh butter and a few sea salt flakes. That literally is a slice of heaven.

For the beer, I recommend something nice and dark, such as Bavarian Dunkel or Doppelbock, or a double stout. Be cautious with strongly-hopped beers, such as IPAs. The beer should be dominated by malt, not hops.

I suggest using a starter that has developed a decent amount of sourness, which really lifts the flavour.

In Bavaria, the most common addition to this bread is caraway seed. Half a teaspoon is about right. Alternatively, coriander seed is also also a popular ingredient used by a lot of Bavarian bakeries. (Don't use both caraway and coriander; two spices are not better than a single one.) If you use seeds, add them to the soaker with the beer.

Michi said:
Unlike some other German breads, you cannot use this one as ballista ammunition during a siege.
Click to expand...

I loved the read and look of this recipe. But I don't have a mixer with paddles, so I always try to simplify bread recipes to reduce kneading amount / time.

Below is my take on this recipe, dialing up the rye content (in order to reduce kneading):

1) Mix starter and beer.
2) Mix flours and salt.
3) Mix flour salt mix into starter water mix
4) Knead the resulting (pretty wet) dough for 5min by hand /with a paddle.
5) let rise for 20min in its mixing bowl
6) knead dough ball for another 5min
7) let rest for 6-10h (can be outside the fridge if it's over night in a cooler climate, probably in a 'warmer' fridge shelf if this is during the day in southern France)
8) prep a well floured surface and form the pretty sticky dough into a nice ball. Be careful not to de-gas entirely. Let the ball sit in a well floured proofing basket or similar for 2-3h.

9) preheat oven with cast iron dutch oven to 470F
10) when dutch oven has been heated up (probably 60min in the hot oven), carefully take it out of the oven, put baking parchment paper inside, and CAREFULLY pour the dough ball into the dutch oven. Don't de-gas it this close to finish line!! Dig some pretty deep (>1 inch) scoring marks into the ball.
11) cook for 25-30min, then remove lid, reduce temp and cook until internal temp is around 95-98C / the crust is nice and dark brown

We tried your bread recipe and it seems great. Here is what we made at home.

I will try to get a picture when we cut it. It is fresh out of the oven.

We used oats and honey as that is what we had.

Well, I had some for breakfast and it was good. I put good Irish butter and some orange marmalade on a slice.

And that knife was my mom's and it is my favorite bread knife. It is a Henckels 5-star bread knife around 50 years old.

I just made another loaf, this time with a different flour. Instead of my usual Caputo Cuoco Tipo 00 flour (13% protein), I used Caputo Manitoba Oro Tipo 0 flour (14.5% protein). This made a noticeable difference. Even better gluten development, and the crumb ended up with a beautifully light and slightly moist texture, still chewy, but not rubbery.

The other change is that I stuck the dough into the fridge for 18 hours after fermentation because something else came up and I couldn't bake the bread when I had intended. The long cold fermentation definitely improves the flavour. There is a lot more complexity in this bread than when I bake it straight after fermentation. 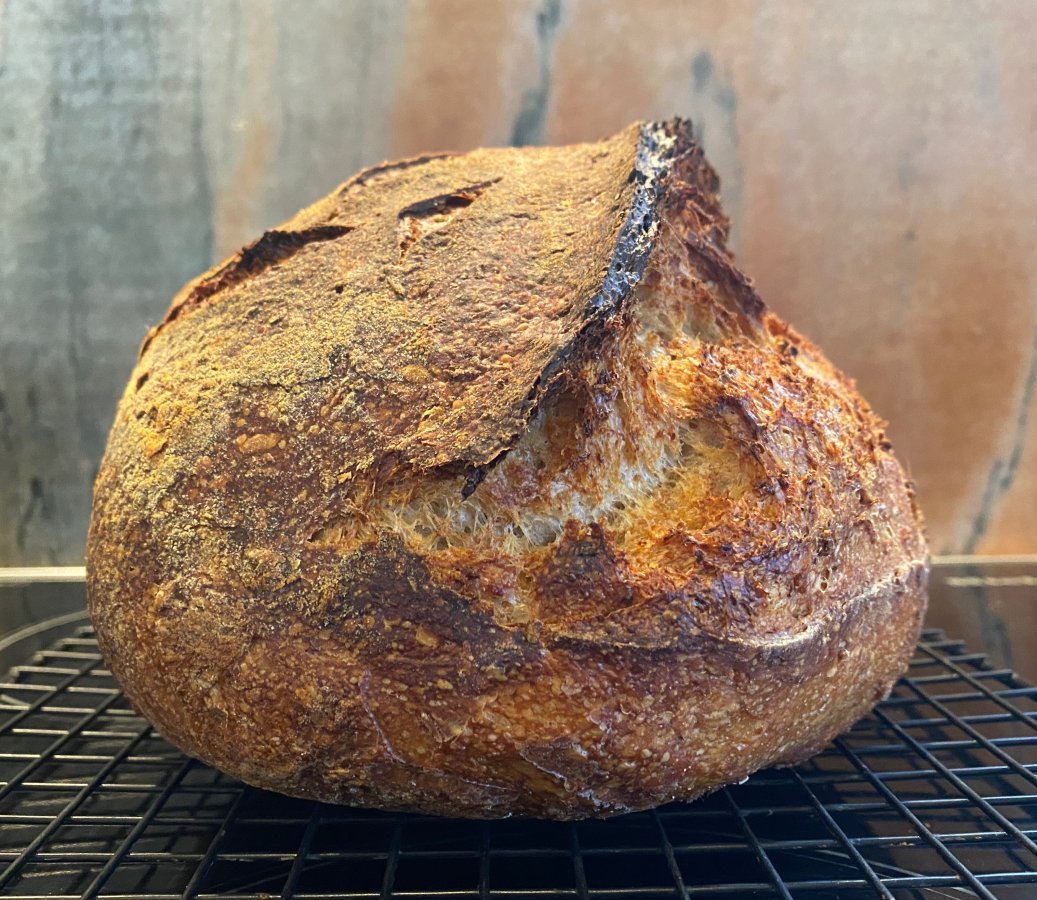 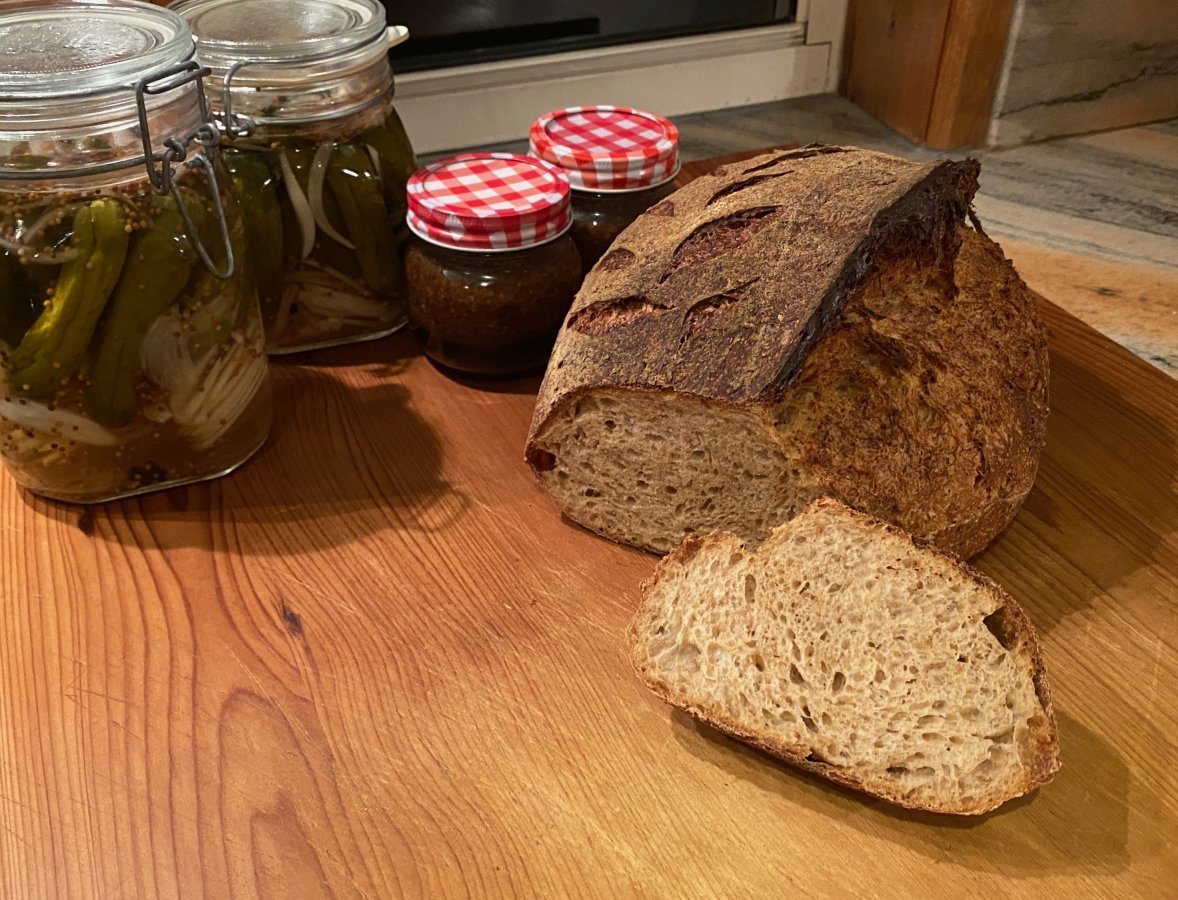 wow that looks amazing. I may give it a shot, altough baking is not my strong side. hahah

More of the same 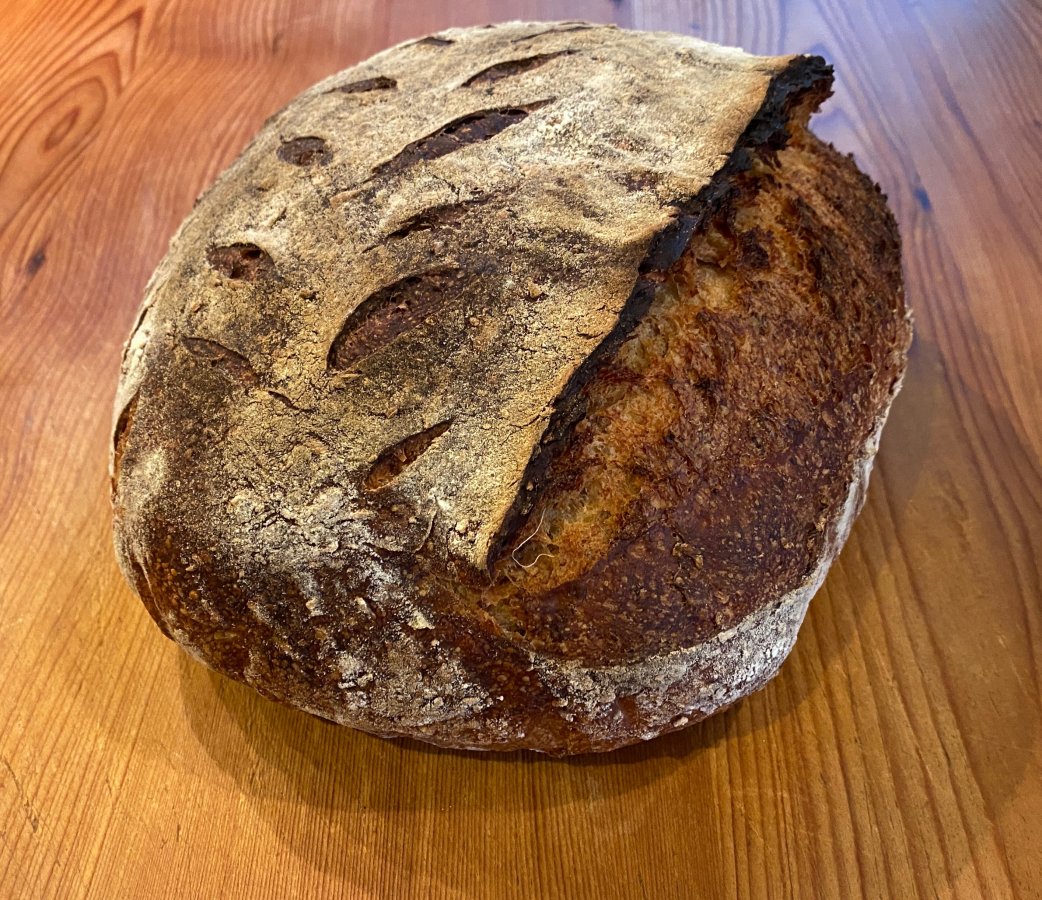 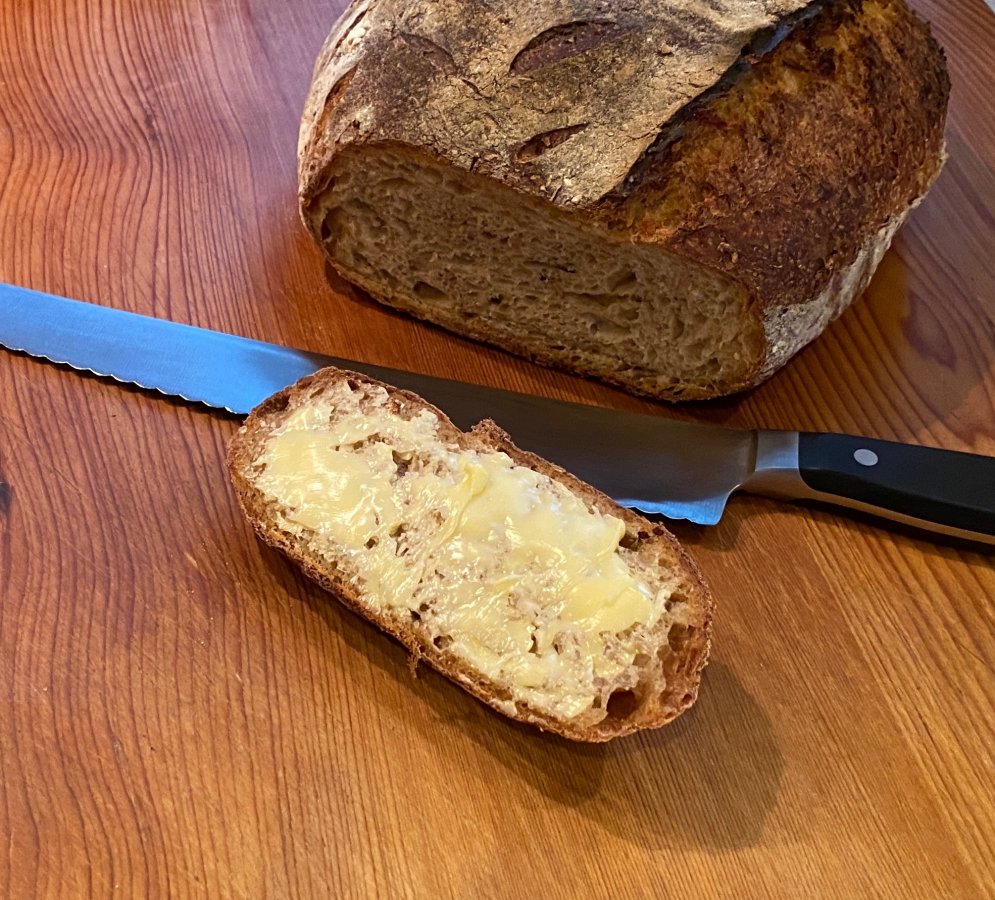