Awhile ago, when my father got sick and ended up in the hospital, I commissioned Spike to make me a knife that I could give my father as a thank you for all that he has done for me over the years. He made me, the man I am today and I hope that I have lived up to his example of honor and loyalty. My father was a 5 tour Vietnam Naval combat corpsman attached to the Marine corps, He has received 12 Purple hearts and 42 combat air medals for flying Medi-evacs, he was shot down 5 times and captured and escaped 3 times, He was the last Naval medical personnel in Vietnam when the war ended. He re-enlisted and went back to Vietnam so that he could bring my mother and sister back to the states with him. They were on the second to the last plane out during the evacuation. The last Americans in country were the Marines and embassy personnel. The man is considered a true hero by many Marines and quite a few Vietnamese on both sides. I have been fortunate enough to have met several of the men whose lives he saved during the war. Yet, he never speaks of it and asked about his medals, he gets angry and says he only got them because he survived and others died. They are the heroes, he was only doing the best he could.Well, my father is a true hero to me, despite the tall tales and bravado that fathers have for their sons, The out and out lies and the pranks. The discipline and embarrassment, the toughness that is pounded into you, despite all of that he made you the man you are and I wanted to say thank you.

That is the background set for the making of this knife. I asked Spike to make me something that looked like it was made a hundred or even a thousand years ago, something with a sense of age to it, I sent him a couple of hippo teeth because I thought they would help with the theme and they had a good feel to the hand, I told him I wanted to keep the tip raw and he could do whatever he wanted with the body of the handle. I gave him a photo of a Teruyasu Fujiwara Gyuto and told him I wanted something similar, but with a Spike twist. I was not disappointed with what he came up with. I call her "Fang"

I will let Spike give you all the specs on the knife.

I received it about a week ago and have been using it ever since. When I opened the box I was struck by the beautifully rustic saya that accompanied it, I wasn't expecting that. It had a perfect friction fit and no pin, I will let Spike tell you what wood was used, as for the life of me I can't identify it. The handle was a thing of beauty, it really did look like it had been around for hundreds of years especially with the hand done scrimshaw. The dragon and the spiral pattern come from a very old family piece a sigil , so to speak. It fits perfectly in the hand and has a warm feeling that only ivory can get. The copper/bronze bolster was lightly sanded with emery, so it had a satiny rustic look to it, like some sailor might have done. The blade was battleship grey from the mustard patina? An appropriate melding of form function and materials. The fit and finish is immaculate as any jeweler worth his salt would do, You see Spike approached this as a jeweler not a knifemaker you can tell in the aesthetic it is different somehow. If I didn't know what Spike was, I would still know that this knife was made by a jeweler. It is elegantly beautiful with the rustic qualities of a working mans knife.

I have used it all week in my kitchen for just about everything. Proteins to desserts to vegetables. I have to say that right out of the box I shaved all the hair off of my cooks arm and he was scared. This thing slid through everything and nothing stuck to the blade and if it did the next sliced pushed it off with no resistance. I cut potatoes, garlic,mushrooms,carrots, butternut squash, chickens, steak, fish, squid and proceeded to peel tomatoes with it and it was a dream. The edge is sharp wickedly so, but not polished, it is toothy the way i like it. It lets you know you are cutting something and it feels magnificent in the hand. That big tooth of a handle is surprisingly ergonomic and quite comfortable after cutting for 6 hours straight. I think my father will love it with his arthritic hands. The edge retention is good, I have used it for six days straight and haven't put it on the stones yet. I would say we are about 85% as sharp as we were. If I put it on the ceramic hone I hit 95%. I have always loved Spikes 01 steel, his HT is always dead on and his blades are the least reactive 01 I have used , after almost a week I barely have anymore patina then it came with. Spikes patinas are always so uniform and clean it is amazing to see in person.


All in all, I have to say this is one of the most comfortable and aesthetically pleasing knives I have had the pleasure to use. It is one of the best cutters I have ever used and I am jealous that I am giving it to my dad. If I ever get the funds again I am going to commission another one for me. I now have had the pleasure of using two of Spikes works and Both of them excel at what they do, he is a true craftsman.he cares and it shows. I highly recommend That if you are looking for something highly unique that nobody else has, you should without a doubt see Spike and have him make you something special. Thank you, oh so very much my friend,
Son
'
'

"Honor above all else, except loyalty" 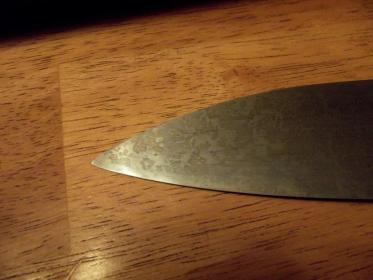 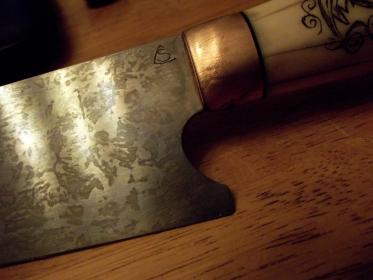 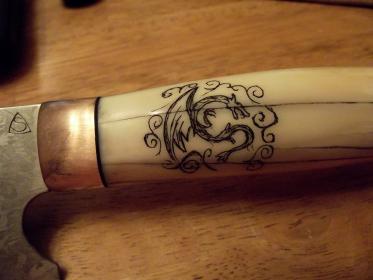 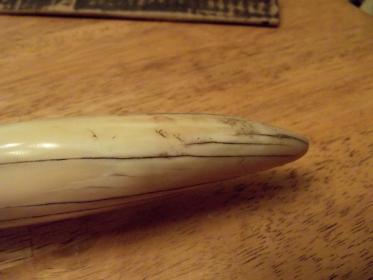 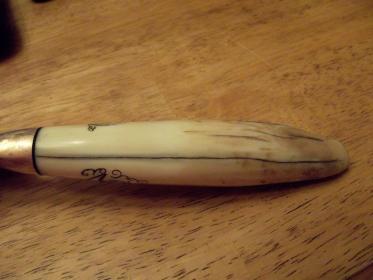 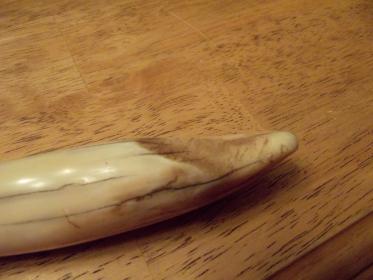 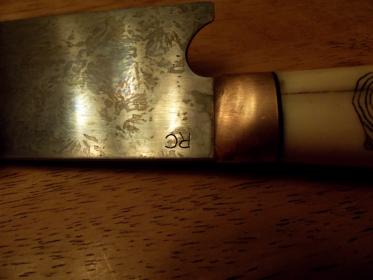 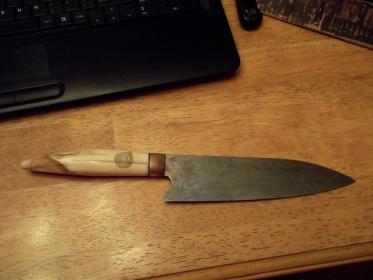 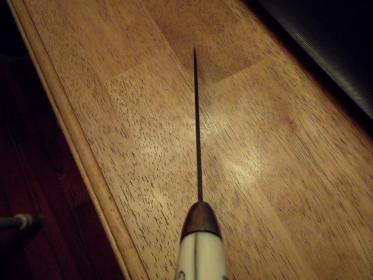 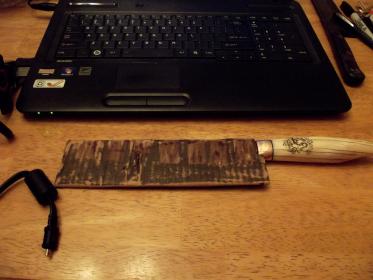 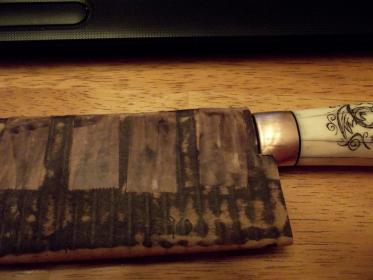 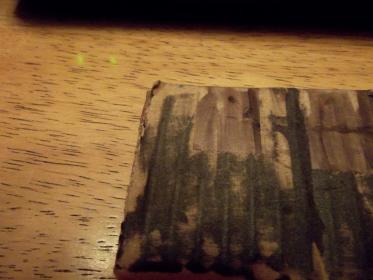 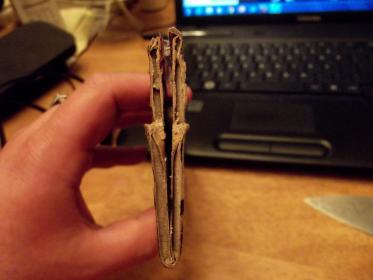 don't you love the saya?

I am sure that your dad will be honored with it. It says what you wrote and so much more. I am honored, and humbled that you shared it with us.

Love the end work and the sheath that spike put on it.

Good looking, and to hear it cuts like a champ is just icing on the cake.

the funny thing is that cardboard and tape sheath says more about my father than the knife ever could, it looks old and beat up, it's barely held together, but it does it's job and it does it well. He was the sheath that protected and held are family together during the tough times of our lives. Come to think of it the last time I saw him he was being held together with surgical tape comforting my mother. My father brought back a few things from the war and they almost all were held together with cardboard or wrapped in yellowed paper and cracked crumbly tape. It Is fitting and appropriate. I will send it to him like that and I'm sure he will laugh about it.Thank you Spike, you were there you know. welcome home.

What an amazing package! And a great story behind the guy that owns it!
3rd MED is one of my best customers here. Nothing but respect for Navy Corpsmen.
They've brought more than a few Marines back from the dead on a Saturday night at the E club.

Cool story and a great knife. Bravo Spike. Hope your father is pleased with it Son.

Thank you very much for sharing with us, Son.

Great story as usual Son. Unbelievable knife. Great way to wake up and start my day.

Son, you always have the best stories. -Be they happy or sad, they're always heart felt and full of emotion.
Great idea on the knife is your dad into cooking too? Is that where you got your interest in it?

It goes without saying, but great work and creativity Spike!

Nice sheath, lol. It adds to the "found in a trunk in an old sailor's attic" thing it's got.

That is a really cool knife.

Inspiring. That's all I can say.

Justin0505 said:
Son, you always have the best stories. -Be they happy or sad, they're always heart felt and full of emotion.
Great idea on the knife is your dad into cooking too? Is that where you got your interest in it?

It goes without saying, but great work and creativity Spike!
Click to expand...

My father is an amazing cook , just like my mother. He once upon a time and it is a little murky used to catch and cook reptiles for the Houston Safari club back in the late 60's (before they were officially started in 1972 and turned themselves into a wildlife preservation society), while he was recovering from his war wounds. apparently wealthy Texas ranchers, hunters and oil men would have private dinners and barbecues and eat wild exotic game that they hunted.

Wonderful spiritual and inspiring. Such amazing work from the heart.

Thanks so much for the positive feedback on this knife! I asked Son about his father before starting on this, so his depiction informed the process. I am humbled by the experience.

The beauty of the knife almost matches the story behind it. Thank you both for sharing.