I had one more half an onion left. So I did one more to demonstrate how useful the vertical method is for finely mincing (brunoise). 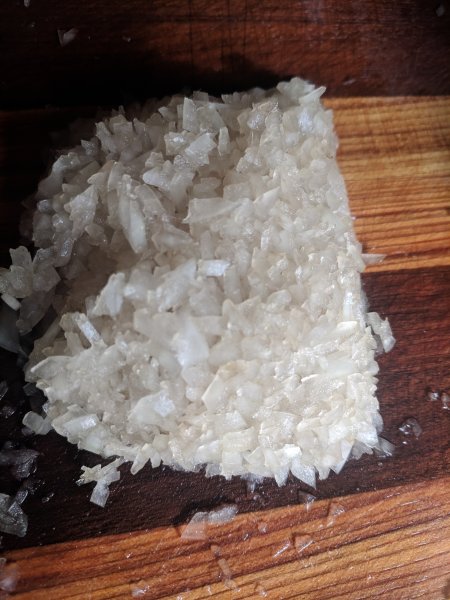 Today I did some work on a Forgecraft 10" Chef Knife. I received this knife in what appeared to be pretty much new old stock condition. I have used it for about a year. Just touching up the edge here and there. I decided I needed to really put it through it's paces. I started with King Deluxe 300. Then shapton glass 500. Then glass 2000, 4000, 8000.
I stropped in between grits on leather, paper, soft wood, cork. Not all every time. Just I tend to remove the burr working gently through lots of media.
There were some low spots from the original grind. I didn't bother smoothing these all the way out. I just gave myself a few mm of cushion between them and the edge. They will work there way out over time.
I did notice a very crumbly weak shiny wire burr break off when I first went to the glass 2k. It left a visibly jagged edge several inches long. I assumed this was fatigued metal. Went back and did a few more passes on the 500 until I had nice fresh strong steel. I didn't notice anything else funky as I went back to the 2k and up the progression. Anyways. It performs pretty good. I will probably rehandle eventually, but this one is in immaculate condition, so it seems a shame to mess with it. I have a couple more much rougher ones that will get new kicks.

First, from when I bought it. 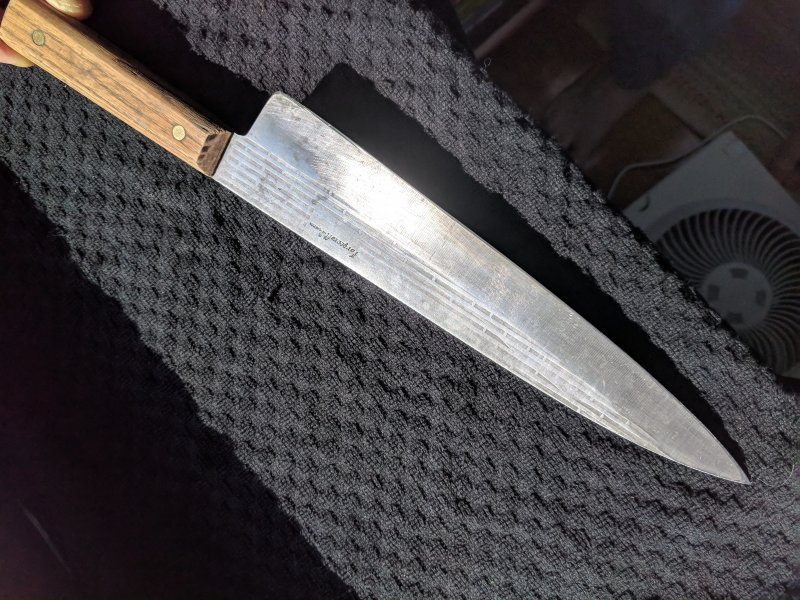 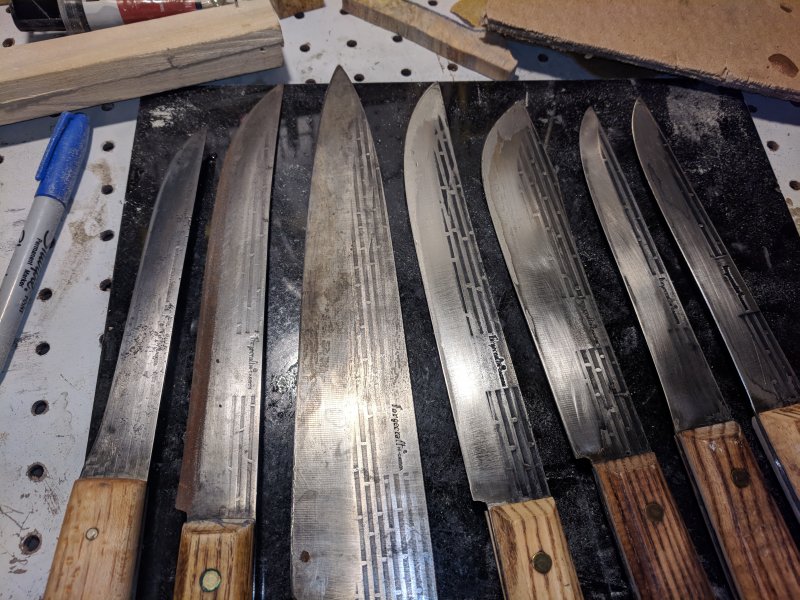 Today after sharpening and polishing the bevels. You can see the low spots. 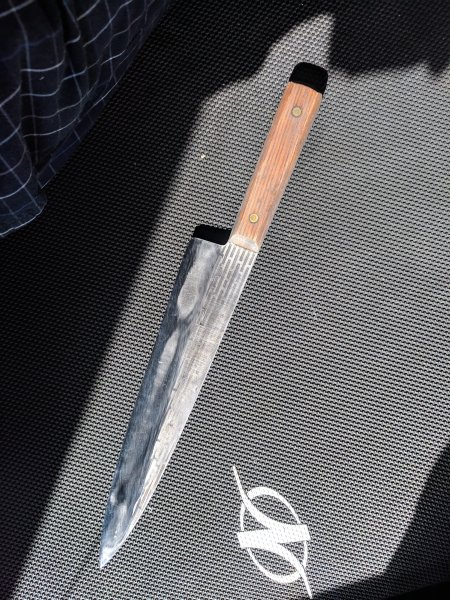 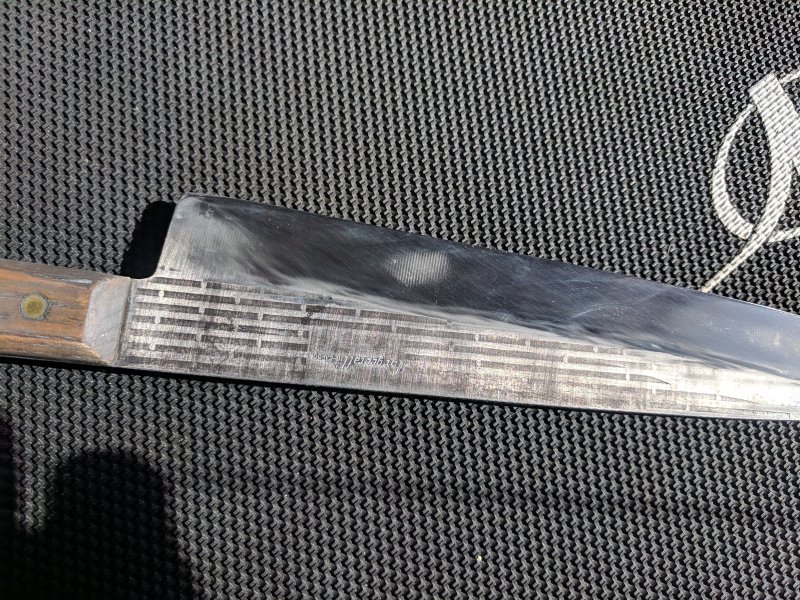 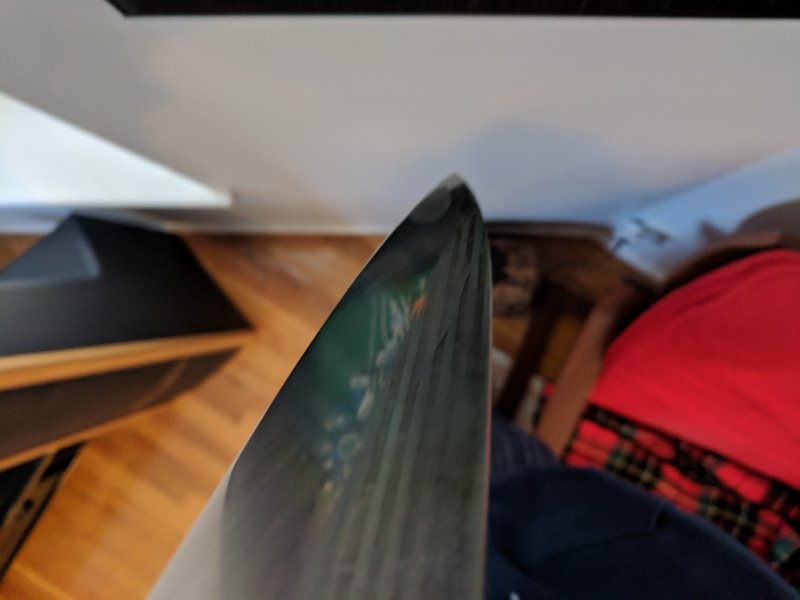 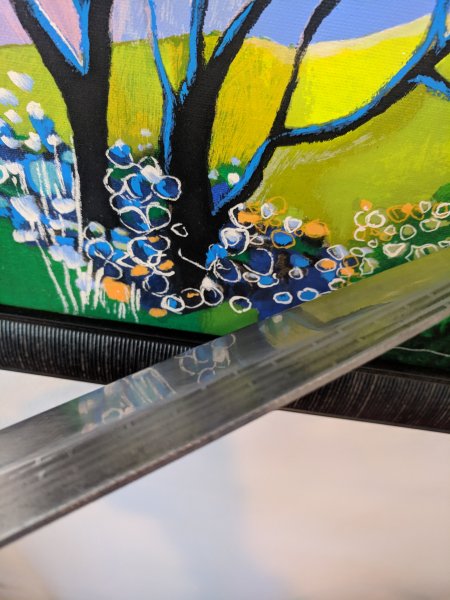 And the patina after some test cutting. The first onion turned black in like 3 seconds. 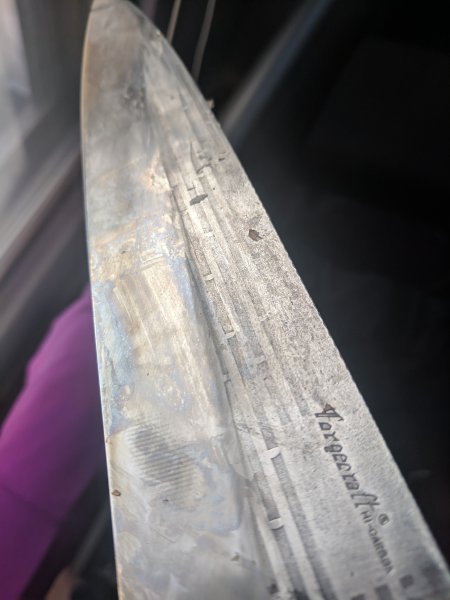 I put a handle on the Martell Petty blank. I am pretty happy with it. Bocote and peened brass pins. Sorry that the photos are crap. I still need to finish the blade. I did a vinegar and mustard etch and then sharpened to 2000 grit. I plan on taking it to 8000 and then polishing the blade road with sand paper. It will give a nice contrast with the dark part. At least for a little bit until the patina turns everything gun metal gray. 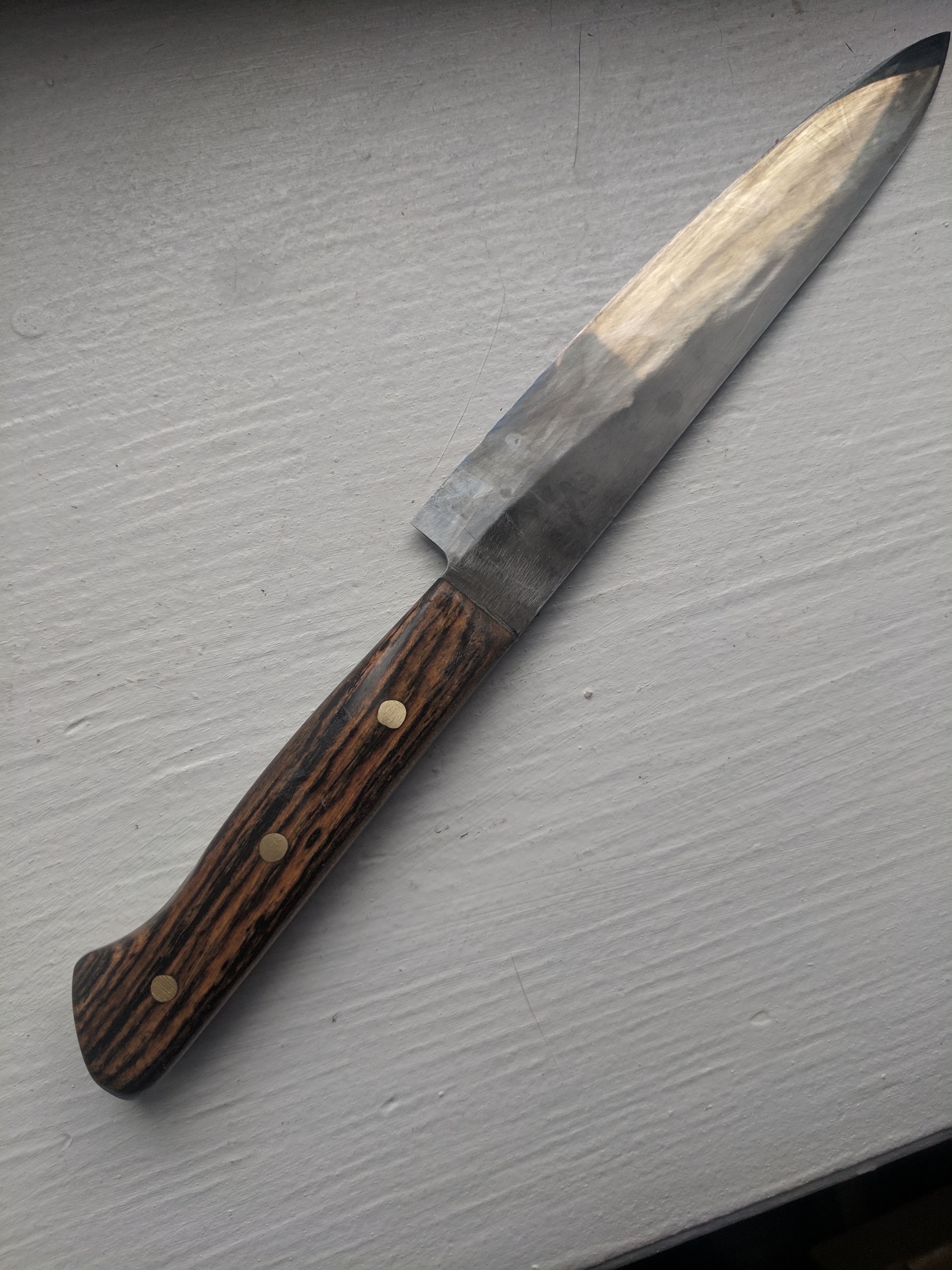 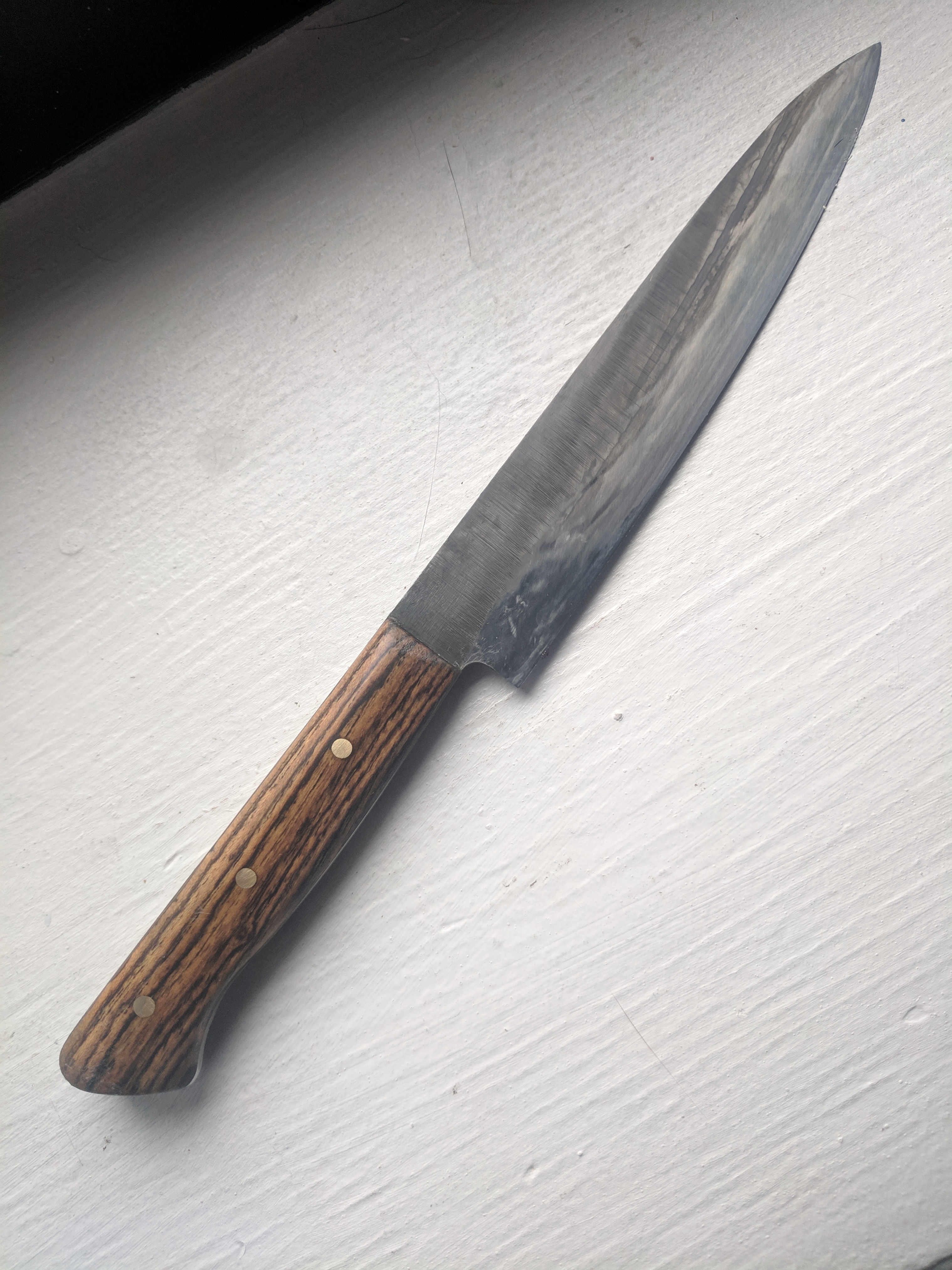 Nice job, I actually like it as is rough and rustic blade. Bocote is one of my favorite woods, so two thumbs up!

Started working on my next project today. My first knife starting from annealed steel. I'm using 1095 that is .14" / 3.5mm thick. The blade profile will be similar to Watanabe or Masashi. Tall, 270mm santoku basically. With a Sabatier style Western handle. Brass bolsters. 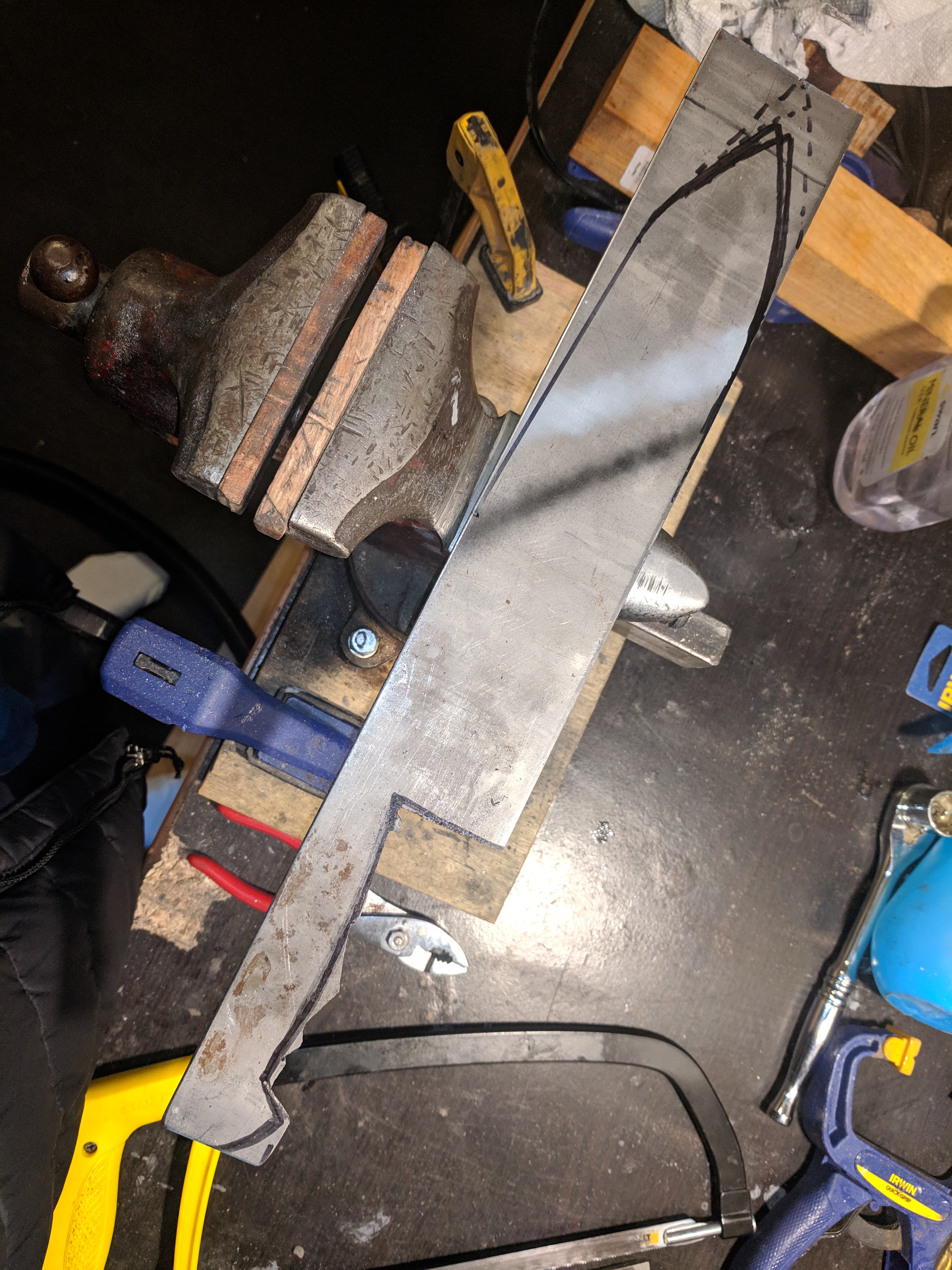 My neighbor asked me to sharpen his cleaver. I didn't really know what to expect. He was a garbage collector in Boston for a lot of years. One day this fell out of a garbage bag and he kept it. Foster Bros 1180.
She's a beautiful beast of burden. I cleaned it up, but not too much. Didn't want to ruin the character.
First I got most of the chips out and established a new convex bevel with the slack belt. Apexed it and deburred by honing in hand with a Debado 200. Further deburr with split leather paddle loaded with CrOx and then clean split leather paddle. She's sharp. 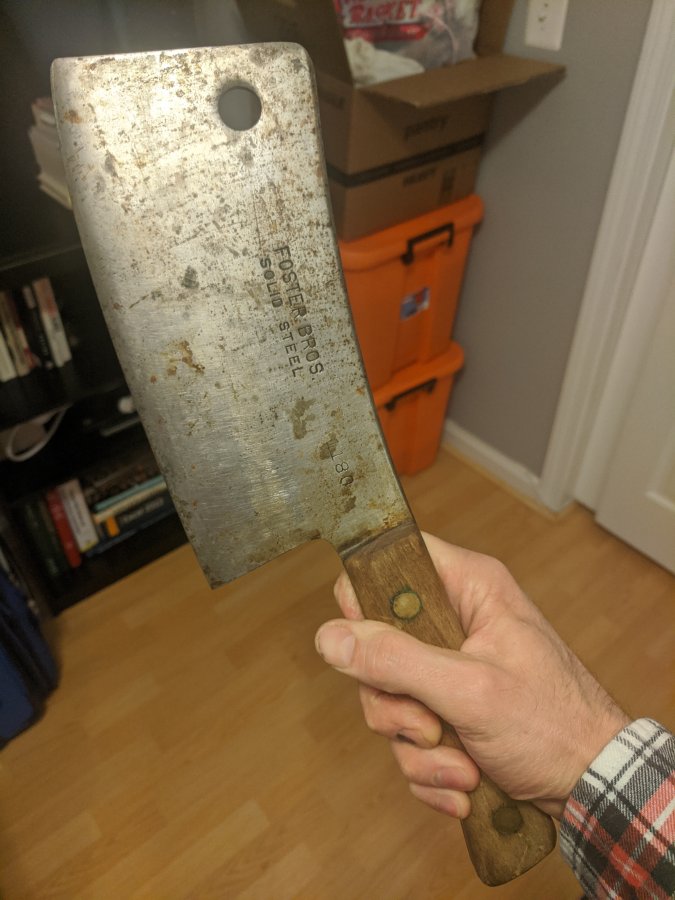 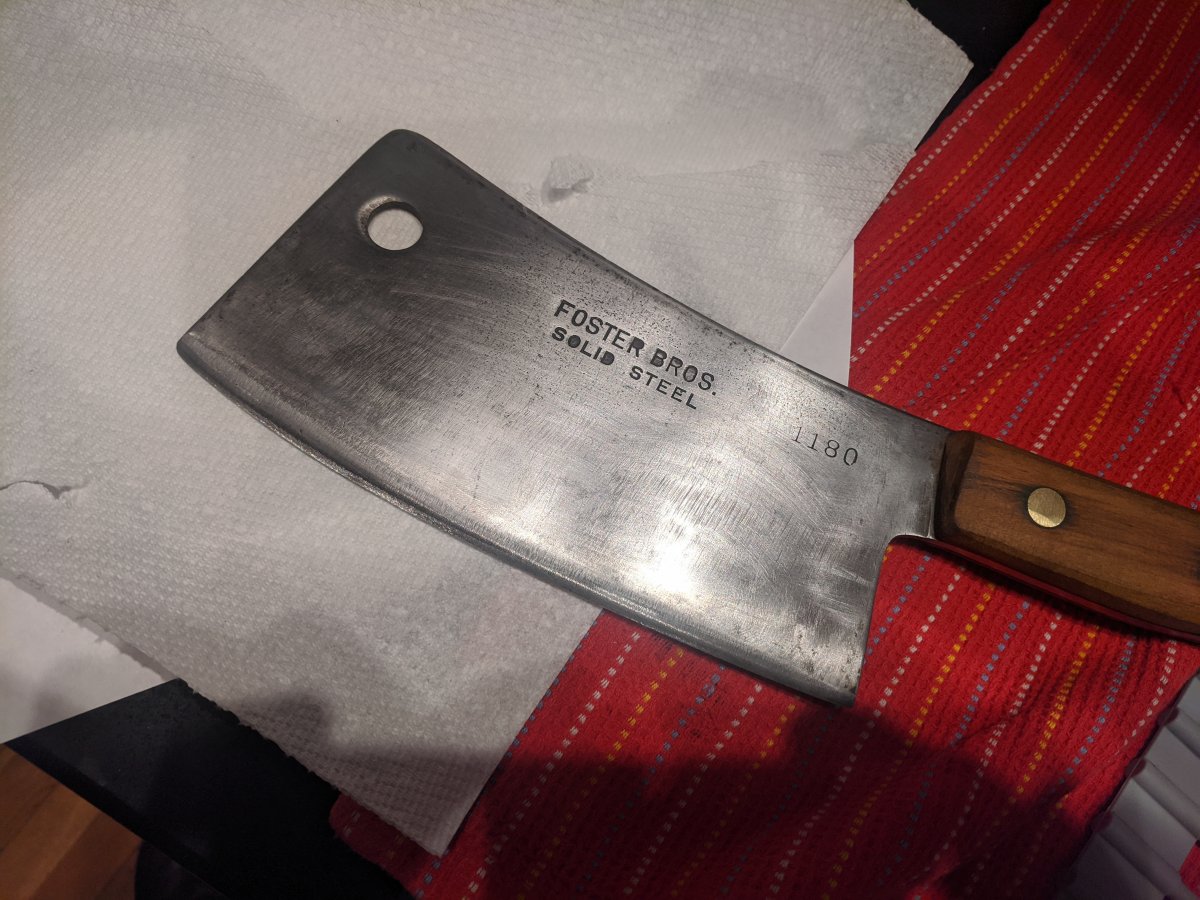 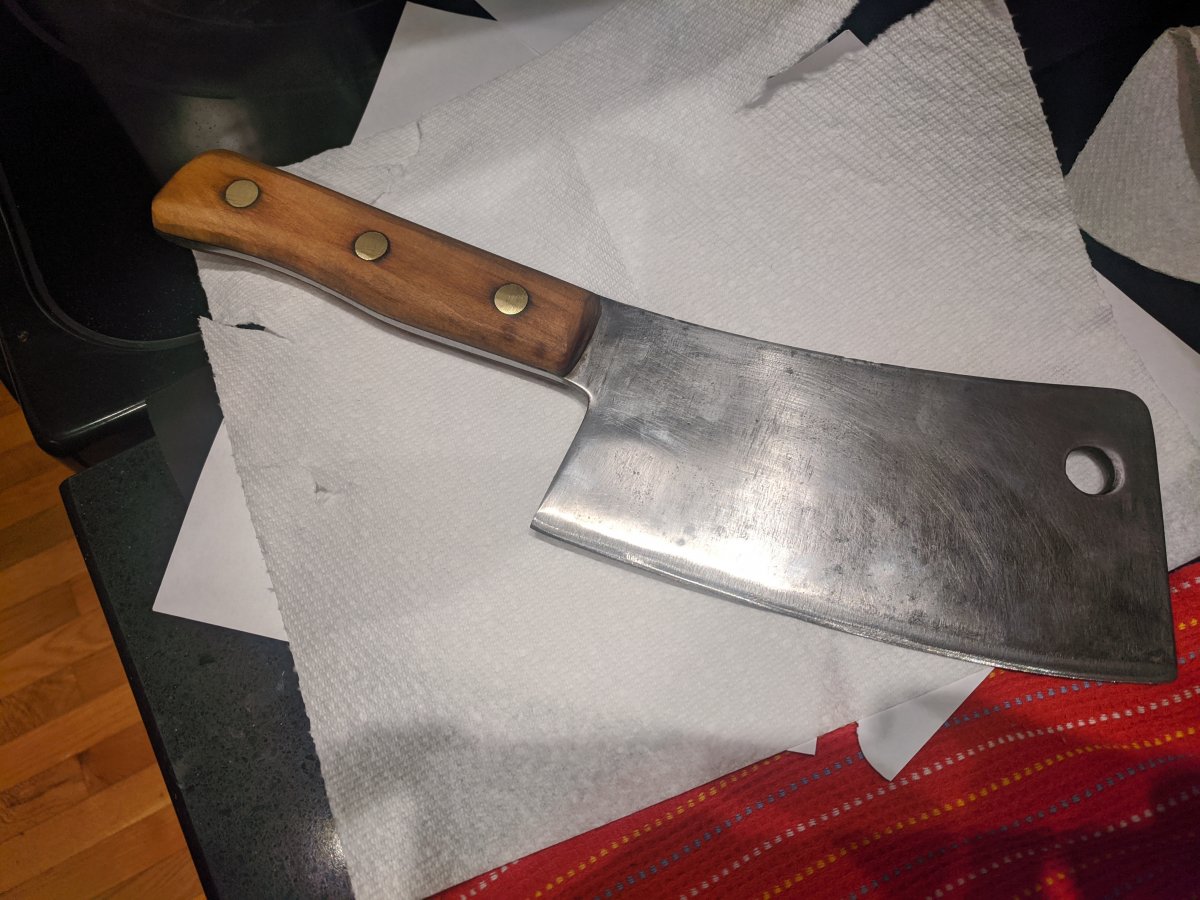 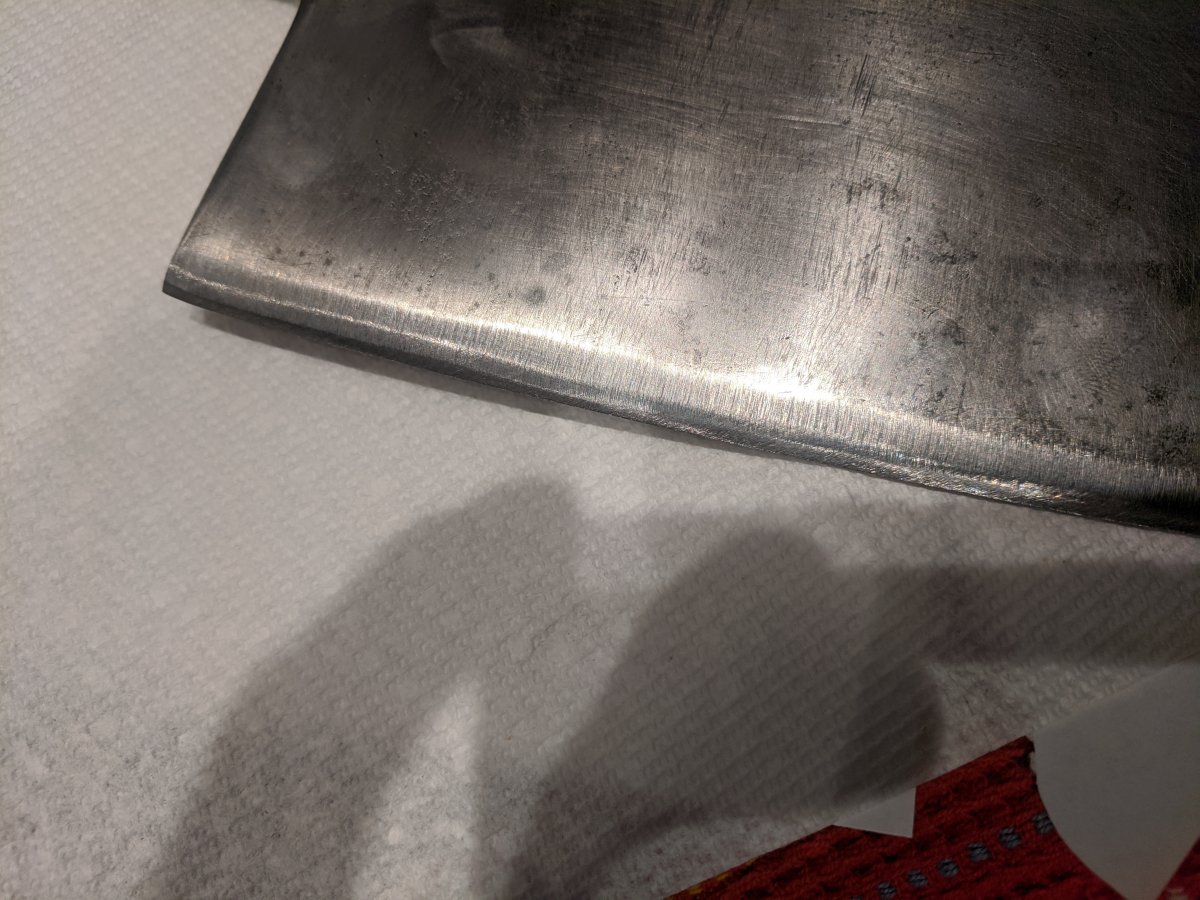 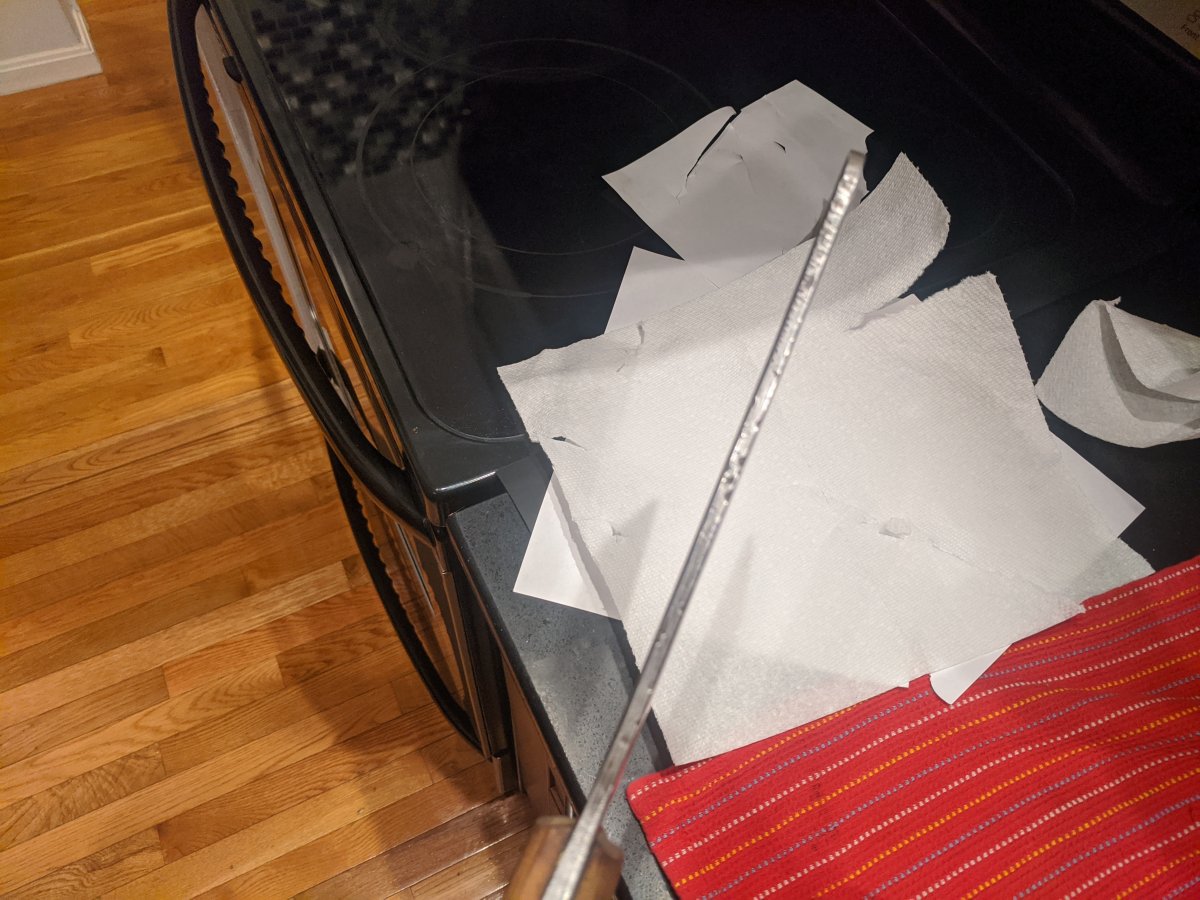 I did a once over with the belt sander on the handle. I also polished up the faces a little. Knocked off the rust.

stringer said:
Started working on my next project today. My first knife starting from annealed steel. I'm using 1095 that is .14" / 3.5mm thick. The blade profile will be similar to Watanabe or Masashi. Tall, 270mm santoku basically. With a Sabatier style Western handle. Brass bolsters.

did you finish this one?

inferno said:
did you finish this one?
Click to expand...

Not yet. I gave up on trying to grind it in my apartment, lol. I'm working on alternative metal working arrangements.

heheh i understand. i bought a small corded beltgrinder (for wood) that i can use outside my house for grinding steel. it beats sandpaper/stones/files at least.

I might try something else to get it done. In the thread where the dude converts the Shig from a santoku to funayuki he uses a little orbital detail sander clamped upside down. I have a regular Bosch orbital sander I think I can use the same way. Beats the hell out of trying to do it with the Crystolon and my steel files. And less noise and mess than using the belt sander with the platen.

stringer said:
One day this fell out of a garbage bag
Click to expand...

stringer said:
Beats the hell out of trying to do it with the Crystolon and my steel files
Click to expand...

What stage are you up to? Sound like you have finished the profile and moved on to the grind? Im not so sure an orbital sander is quieter than a belt sander by a large enough margin to justify the reduced efficacy. Smaller pads. Less useful motion.... The belt sander is definitely the fastest/easiest option.... I would suffer the clean up for that. I empathise with the noise point. If noise concerns prevent you from spending a few hours grinding, files probably are your best option ?
You must log in or register to reply here.
Share:
Facebook Twitter Reddit Pinterest Tumblr WhatsApp Email Link