Sujis seem to get lumped together when there are a few attributes that give rise to different sub-classes of suji. Length is an obvious attribute, so I won't discuss it in depth here. The other attributes I think are important are (1) flex/thickness, (2) blade height, and (3) edge bevel ratio. The type of grind also matters, but I think that spine thickness and edge bevel ratio each contribute more to the overall performance of a slicer than the grind does, provided that the suji isn't super duper chunky behind the edge. Stiff slicers and flexible slicers are more or less useful in different applications. Sujis with a fair amount of height can better function as line knives or quasi-gyutos, where shorter knives provide less board clearance (grip and technique can mitigate this). Taller sujis will also be stiffer than shorter ones, all else being equal. And sujis with heavily biased edge bevels will tend to steer as they cut, making them less useful for uniform portioning of taller/denser products and producing paper thin slices.

Sujis with thicker spines are stiffer than those with thinner spines, all else being equal. Depending on your application, stiffness (or lack of flex) can be a liability or an asset. When portioning steaks, for instance, I prefer to have a suji with a thicker spine and minimal flex. I also prefer these knives to be on the long side and with a forward balance so that the knife itself can do a lot of the work. For other tasks, like skinning fish, I like to have some flex in the blade. It's not necessary, but it does make things a bit easier when skinning an entire filet. Sure, I can do that with a super stiff suji or yanagi but... again, I prefer something flexier. And for making super thin slices of something, it is important to have a blade that is not too thick (which makes getting paper thin slices difficult) and does not steer.

For these reasons, I think it can make sense for people to have multiple sujis with different attribtues to fill different cutting niches. I have two proper sujis (an Anryu AS 300 and a Togiharu 270mm k-tip with grantons) as well as a 210mm Gesshin Ginga petty/suji. Here are some choil shots. Apologies that the photos don't line up better, as it gives a somewhat distorted perception of thickness and height. I give measurements below. 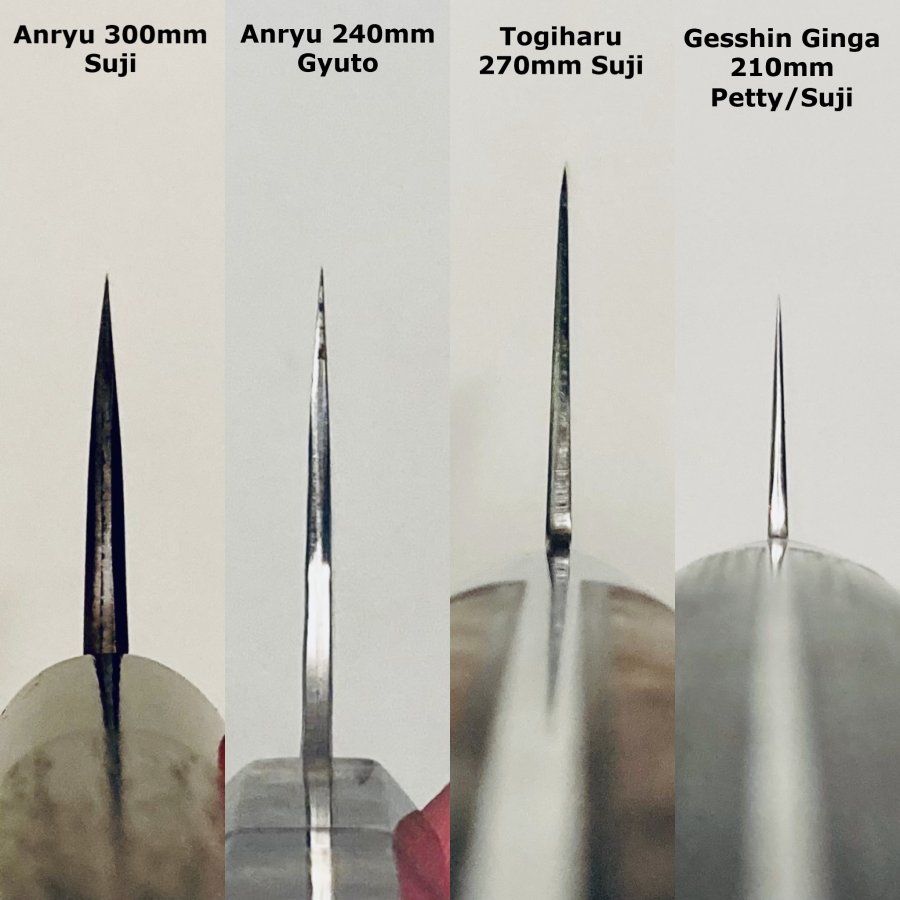 I threw in my Anryu 240 to drive home how different the thickness and grind are on the suji versus the gyuto. That Anryu is stiff and chunky with zero flex, making it my top choice for slicing steaks from roasts and striploins. But even though it's quite tall, at just under 44mm, it doesn't work great as a gyuto because of the overall thickness and chunk factor. It's 3.6mm over the heel and 2.5mm halfway down the blade. Not super thick like some yanagis, but definitely thicker than the gyuto. Had the grind been thinner and higher, it might function better in a more gyuto-like fashion, but steaks and meat just really push themselves away form the blade as the knife falls through. It's wedgey for much else besides slicing (though I occasionally do a whole meal's worth of prep with it just for fun).

The Togiharu is significantly thinner and has much more flex. It's 2.2mm above the heel and 1.7mm halfway down the blade. It's 38.5mm tall which doesn't leave a ton of room for knuckles but could function on a board in a pinch. The flex makes it less good as a general prep knife. Though it's nimble, the flex means that doing horizontal and vertical cuts on onions feels a bit... dicey. But the biggest thing that works against it as a general purpose knife is the 80/20ish asymmetric edge bevel which makes it prone to steering. This also makes it bad at doing paper thin slices of roast beef or turkey or whatever, even though it's a pretty thin blade overall. This matters less when slicing sashimi or cured salmon because you're not slicing through thick product. Fish is also quite delicate and yielding, so it doesn't fight the knife as you slice through. But for doing thin slices, I end up reaching for my Victorinox fibrox granton edged slicing knife. Boring. Vanilla. Cuts real good tho.

The Ginga is a classic laser. Very short, so not great for board work. Stringer has pointed out that you can adjust your grip and use even very short knives on a board, and while this is true, it's still less than ideal to use something that's only 31mm tall to chop on a board. As a wise man once said, you can drive a car with your feet if you want to... that doesn't make it a good idea. It's 2mm above the heel and thins out similarly to the Togiharu. But because it's much shorter than the Togiharu, the tip is much closer and doesn't flex around as much when you use it to dice an onion. The edge bevel is also a nice 50/50 so it doesn't steer. It's a great knife for cutting cooked proteins and for butchery. I use it a lot for removing silverskin. It's also really good at portioning smaller items like tenderloins. It doesn't have the length required for portioning big steaks, but there's a lot it *is* good at. I like this knife a lot and it gets used much more often than my other two sujis (which I also like a lot, but have less need for as a home cook).

So with all that said, I invite you all to contribute your thoughts on suji styles. What sujis do you have and what tasks do you love or hate them for? What attributes do you think are most important in determining suji performance? Does grind matter more than I said it does? And is there a "Goldilocks" suji out there that's moderately long (like 240-255) with enough height to chop on a board, an even bevel to avoid steering, and some flex but not enough that it causes problems?

My experience with sujis is on the limited side of the scale (270 Fujiwara FKH, 270 Mazaki, 210 Ashi Ginga), but to me it seems like there's roughly 2 main classes:
-Fatter, heavier, stiffer, which excels as a slicer (for example portioning out steaks, or cutting nice slices off a roast). Especially at denser stuff like cutting cured meat something stuff works far better.
-Thinner and lighter, which excels for trimming and filetting.
I'm inclined to agree with you that at least for cutting meat the grind is somewhat less important. If your meat goes 'crack' or wedges I think you have other problems...
Like you said; either type can sort of do everything, but they clearly perform better at certain things.

For chopping with blades that have low blade height, cut in the bottom corner of your cutting board so your handle is actualy off the board; then it's actually not a problem at all.
G

I like symmetrical, medium height, stiff. I like a suji that I can use for gyuto tasks as well, around 40mm and hence the symmetry. I’ve never liked a flexible blade mainly because I was never trained in classic cooking techniques with the typical Western slicing carving, and boning knives. So for trimming I tend to use a petty, honesuki, yanagi, or my style of suji.

One thing on height and flex: a very thin blade that is slightly taller is stiffer than a narrower one, as is one that is thicker at the neck and tapered. So I can get very thin slices with the Mazaki.

A wide bevel or notably convex grind seems to be better for slicing meat, but worse for anything else with the short height. I used to switch knives a lot more at work but now I try to use fewer of them per day, hence my preference for versatility. Also depends on the setup and workflow of your particular kitchen.

A severely asymmetric bevel ratio seems to be a middle ground between a suji and yanagi: a steeper angle and less fragile, but can be prone to steering (although I’ve read threads about sharpening to compensate for this and I’m not proficient enough to speak definitively, and I feel like the user can also adjust technique for this). Because the bevel isn’t as tall as a single bevel, though, it is effectively thicker at the shoulder which is closer to the edge at least on the examples I’ve used like that. So it’s again more purpose specific and closer to the traditional Japanese fish-focused knives.

I ordered a custom Mr. Itou 270mm suji. It seems to be taller than many other options, close to a Gyuto. I'm expecting it to be great for portioning steaks and slicing roasts.

I'm also considering a Nigara Hamono SG2 300mm Sakimaru suji. I particularly like the curved tip, just because it reminds me of the knives that our taqueros use for slicing the meat for tacos al pastor. I guess it is gonna take a little extra attention when sharpening but I'm ok with that.

The only hands-on experience that I have right now with a Suji is with a Yu Kurosaki Shizuku. That one is the main line slicer of a co-worker and I'm the one who covers his shifts, so he allows me to use his knives (he is the head chef of a brother restaurant from the one I work at). He knows that I use them with a lot of respect. It is the only line knife used. It certainly does the job.

My biggest experience with slicers is with Yanagibas actually, since I have worked as a sushi chef many times. So, because of that, I'm very used to thick and stiff blades, for many different tasks. Any flexible knife feels weird to me... I even do Katsuramuki with a Yanagiba. Heck, I can even use a Gyuto for that. 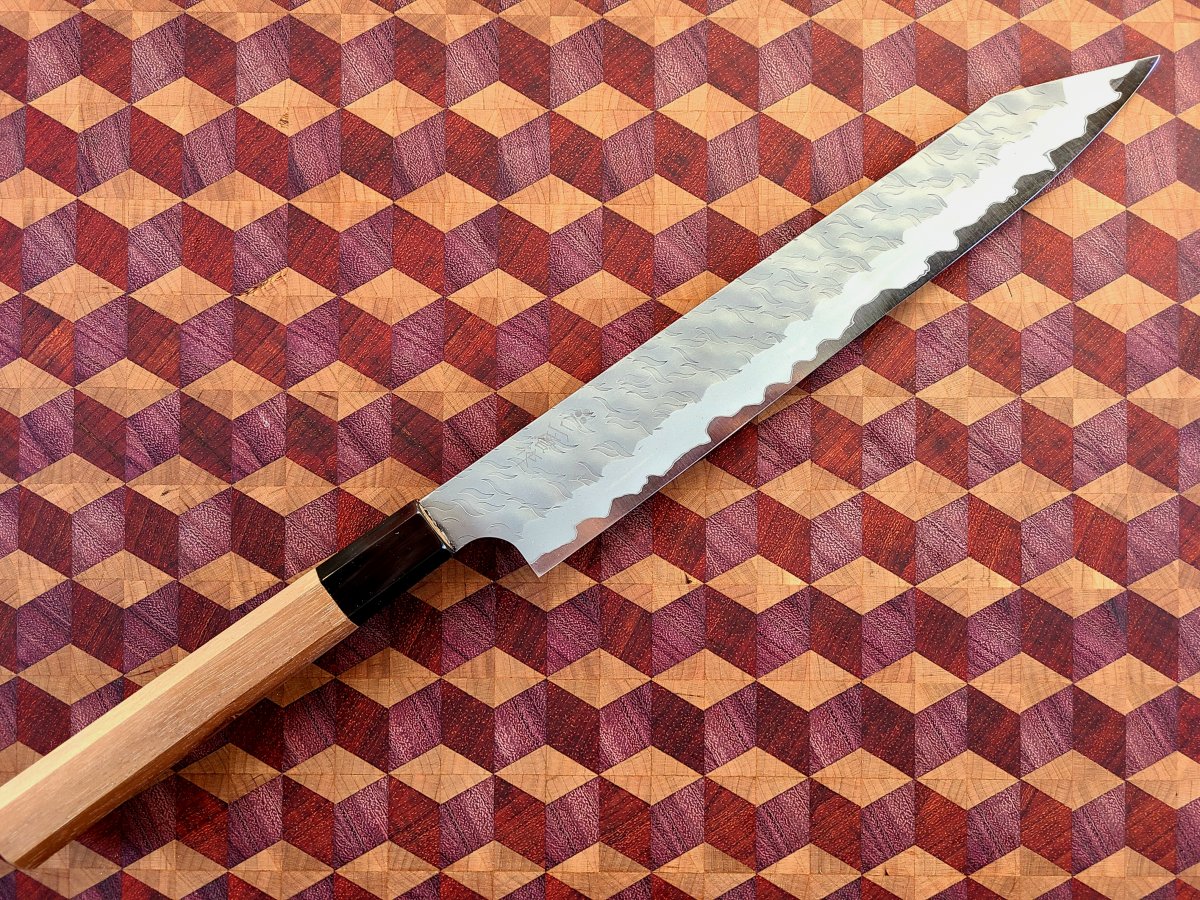 What do you like about them? Just the look? My 270 has a k tip, but I don't know that it confers much of a functional advantage.