sadly I need some cash so I am selling a couple of my Watanabes.

First is my 210 Pro Line Blue Steel Wa Gyuto. As it is carbon steel it picked up a good patina which I cleaned off for the sale I also thin my knives slightly with each sharpening as such it doesn't have that fresh from the maker shine. I think I've only sharpened it twice. The pictures do a good job of showing the knife condition and I consider it to be in great condition. Many of Wanatabe's gyutos are considered to be "mighty" however, of all the Watanabe gyutos I've seen or used this one is the thinnest. It's not quite a laser but I find it to be about perfect for my tastes. I just pulled out the calipers and the last 1/4" of the blade it's thinner than my Takeda nakiri and about 1 inch from the edge it's only about 1/10th of a mm thicker. It has the ho-wood and buffalo horn handle. This knife sells new for $300 I'm asking $220, buy pays actual shipping costs.

Second is my 165mm Watanabe kurouchi nakiri - Standard grade, with the blue steel upgrade. The blade of this knife is in excellent condition, the kurouchi on the front of the blade is kind of uneven looking, that is the way it was from the factory, I don't mind it as Kurouchi is not meant to be pretty but rather pure functionality. The ho wood and plastic ferules on these knives are super hokey, so I replaced it the handle myself. It is the first custom handle I ever made. It is made of ebony and a burlwood body, I can't remember the name, it's been too long :biggrin: and a stainless spacer. I personally think the handle is super comfy and is overall pretty awesome, but as it was my first it's not as immaculate as my later handles but still really nice. This knife sells for $145, given that it has the cool custom handle I'd like to get $130, plus actual shipping. Both knives have their original boxes. Please let me know if you have any questions. Thanks! 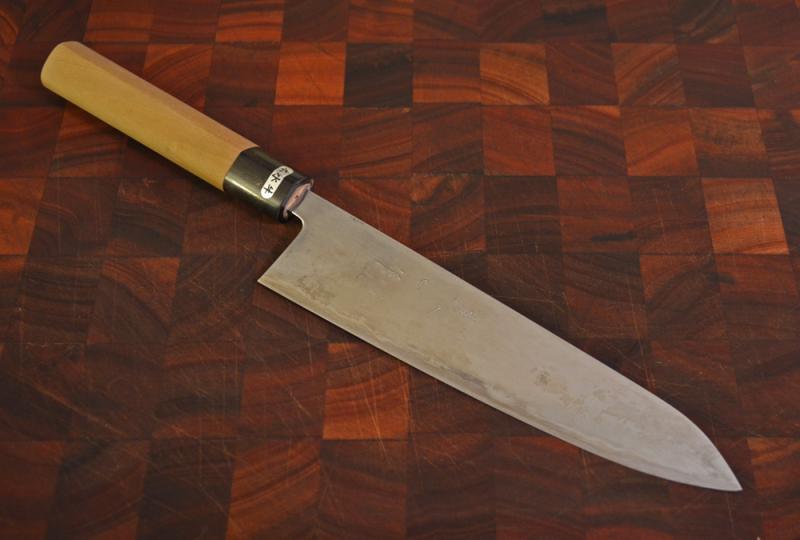 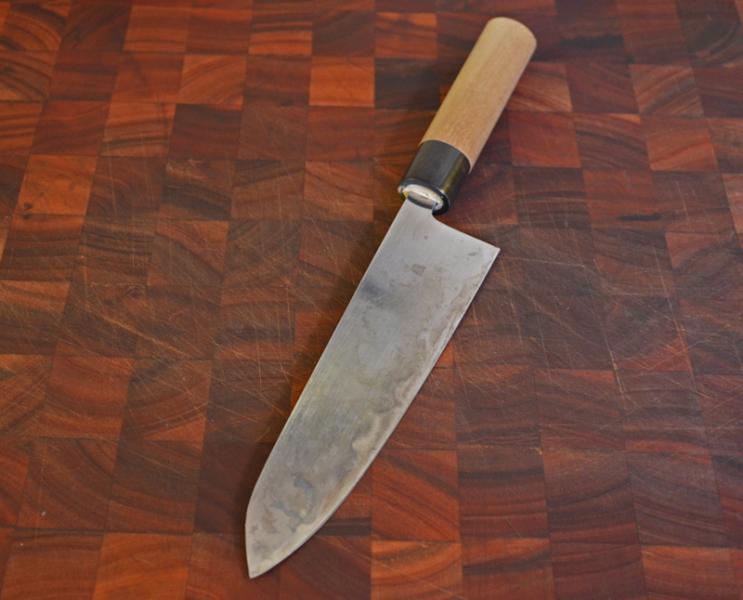 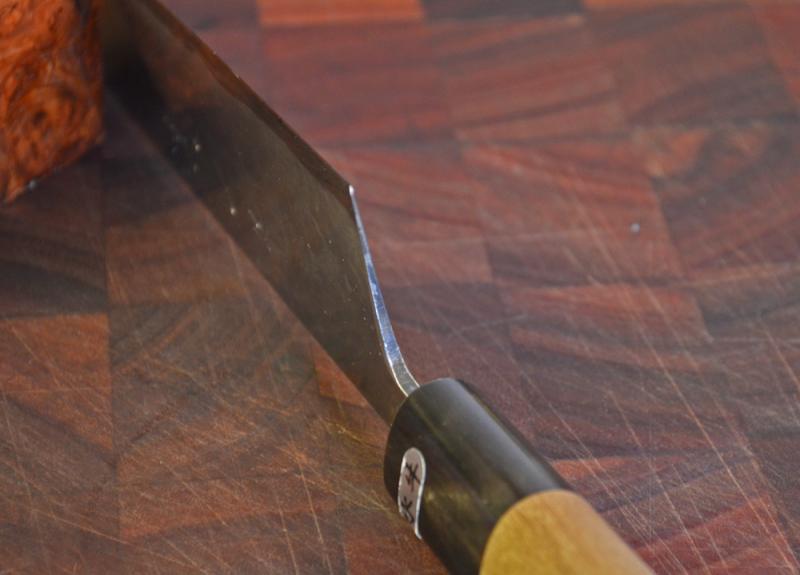 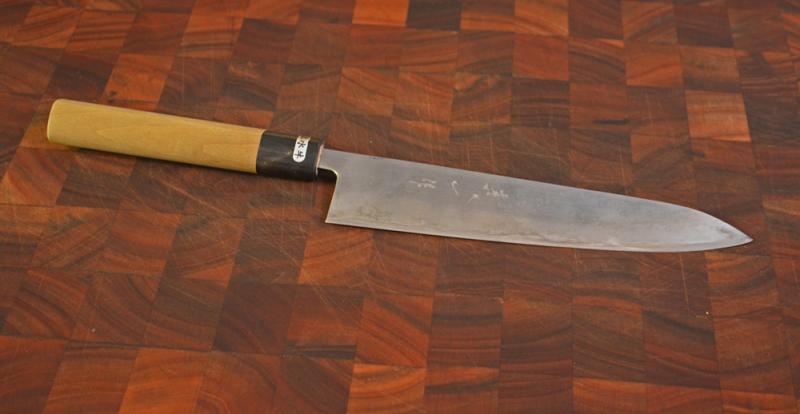 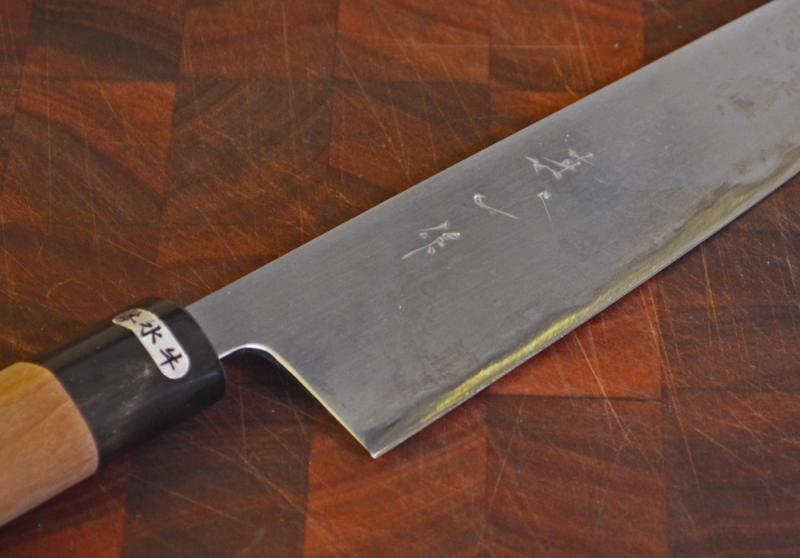 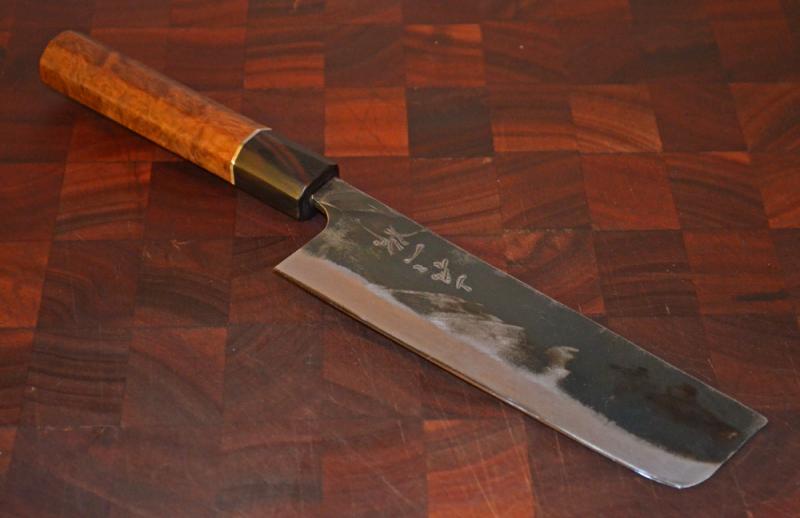 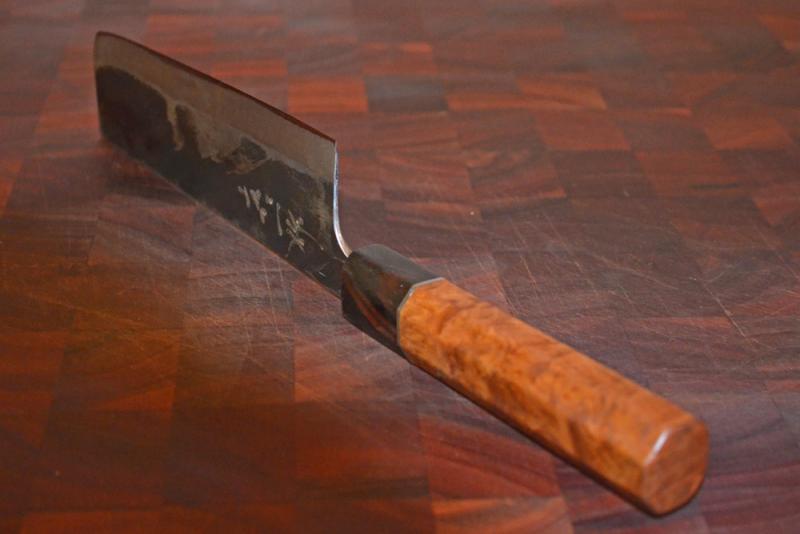 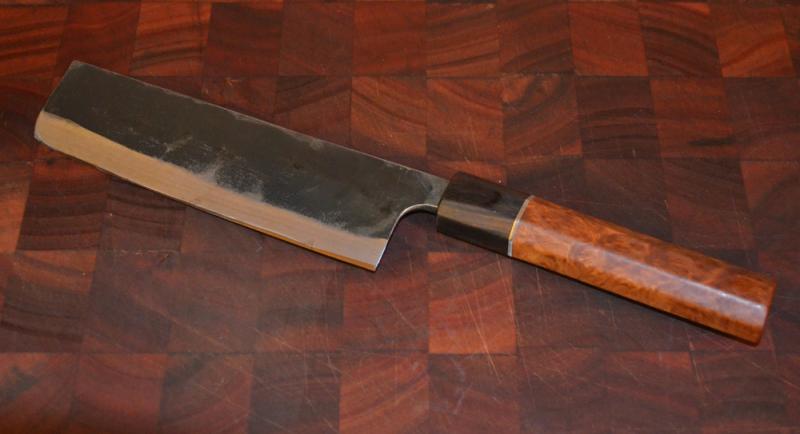 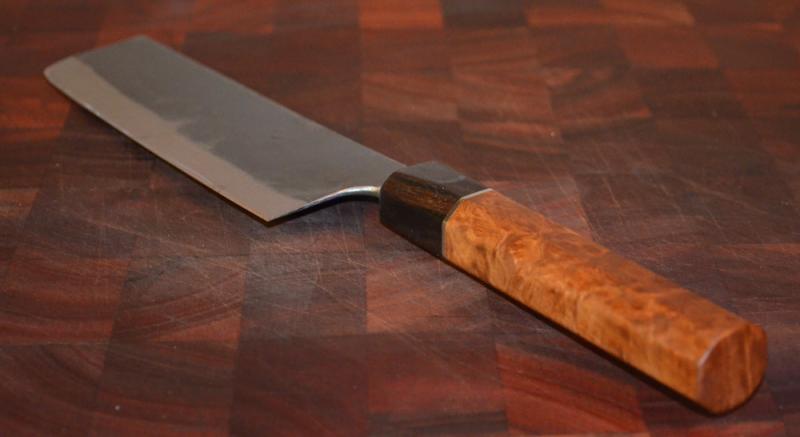 Congrats on the quick sales Andy, and to the lucky buyer/s.
L

Hey Andy, are you just showing up here to torture us? Great knives, one can never have too many Watanabe knives. That gyuto really would have tempted me but I was too late anyway.

apicius9 said:
Hey Andy, are you just showing up here to torture us? Great knives, one can never have too many Watanabe knives. That gyuto really would have tempted me but I was too late anyway.

It would appear that way. After these I don't think I have any Watanabes any more. Kinda sad, he's always been a favorite maker of mine. Alas all part of my goal to get my collection down to a manageable size.

Andy777 said:
Alas all part of my goal to get my collection down to a manageable size.
Click to expand...

you'd be surprised, I think I'm currently around 15 or so. Probably still a ton to some people here but a fraction of others. I'd like to get it down to maybe 10, it's very slim pickings from here out. I need to at least sell another cleaver or two but I don't know how I'd decide.

I am not sure how, but I stumbled across an old thread of yours in the B/S/T area of KF. I bookmarked it because it was the best cleaver I had ever seen (perhaps still to this day). Remember this one?

I'm curious which cleaver (or cleavers) are definitely safe from elimination as you pare down your collection.

That Carter was a killer cleaver, the handle was a little blocky for my tastes but the blade kicked ass. However, I sold it because I had an overall bad taste in my mouth. I special ordered it, waited like 9 months and then Carter delivered a cleaver that was the exact opposite of what I had asked for. I asked Murray if he could fix it and he said it would be better to just make a new one. That one there is the new one that is actually how I wanted it, but with all the back and forth, waiting, and huge layout of cash I just had a bad taste in my mouth. I sold it and bought a 24x30" 14" thick cherry butcher block, one of the best knife related purchases I've ever made.

I think my two most absolute favorite cleavers are my Tadatsuna and my Suien VG-10, I don't know why but they just speak to me. The only other slicers I have left are my CCK, which I won't sell due to sentimental value and because it kicks ass, and my Mizuno, Takeda, and Sugimoto cleavers. Everytime I mention the thought of selling that Sugimoto with the green fish handle I get like 5 pm's asking to be added to the list. How I'd sell one of those last three I don't even know. But who needs six slicing cleavers? I should do a photo post of the knives I have left after all these years.

Andy777 said:
I should do a photo post of the knives I have left after all these years.
Click to expand...

I hope you will Andy. I would love to see it (and am sure I'm not alone).