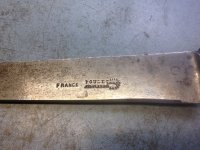 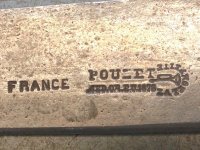 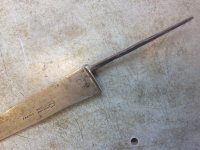 Can anyone tell me more about this flea market find? Made in France, stamped POUZET with the LA TROMPETTE logo. It appears to have lost its original handle and has what I understand to be a rat-tail tang. Any info is much appreciated!!

Hi Tess, this is a part of forum where new members briefly introduce themselves. Please do that and then post the photos in the general area of the forum - you will get more exposure there and thus bigger chance to learn about your knife.

Pouzet is a family that has been very active in Thiers, the French equivalent of Solingen.
La Trompette is a trade mark, not so much a brand as we know it today. It become famous by Pierre Auguste Sabatier who revolutionised kitchen knife making. His model of the chef's has been copied all over the world.
The reference to the World Exposition of 1878 gives an idea.
One would expect the logo to be at the middle of the face. If it isn't, maybe it's a former chef's that has lost a lot of width.
You may try selling at Ebay. Prices have gone crazy these last ten years.
You must log in or register to reply here.
Share:
Facebook Twitter Reddit Pinterest Tumblr WhatsApp Email Link