here is my new knife rack i made out of a oak plank last december.
I really love the look 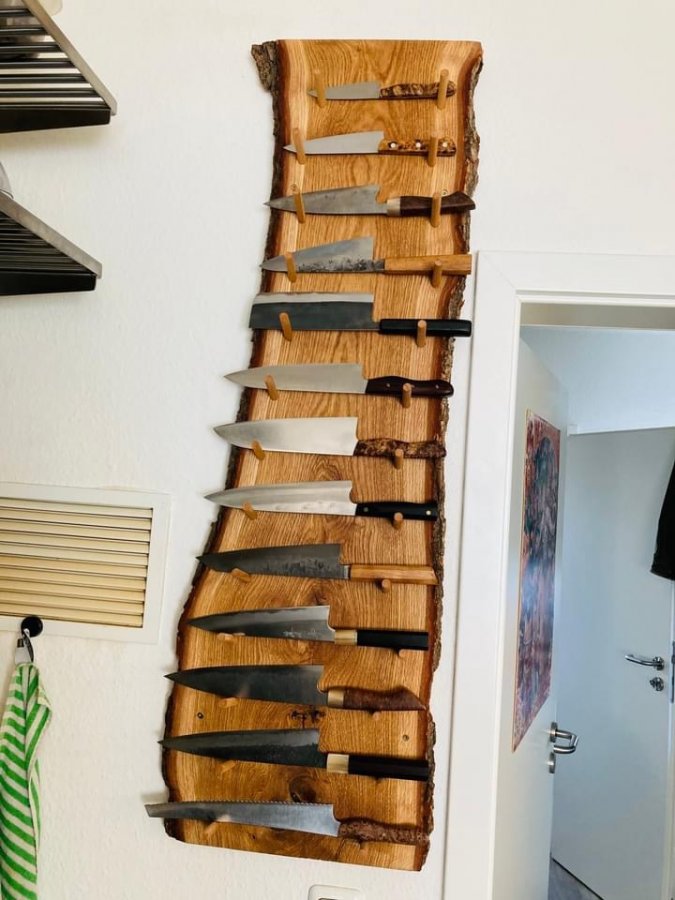 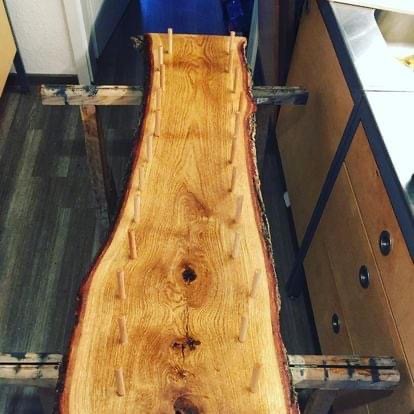 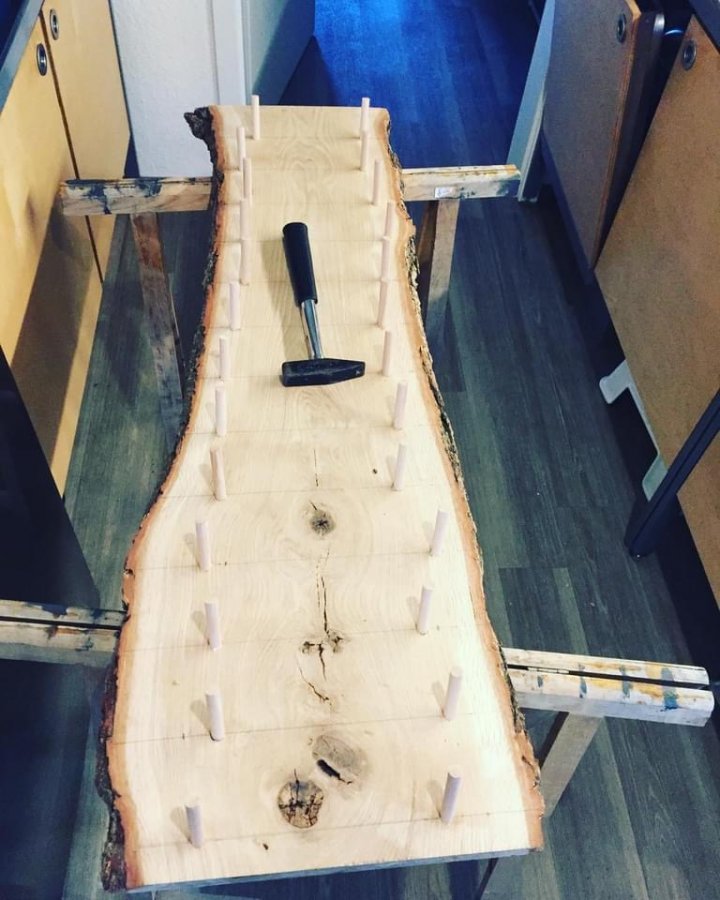 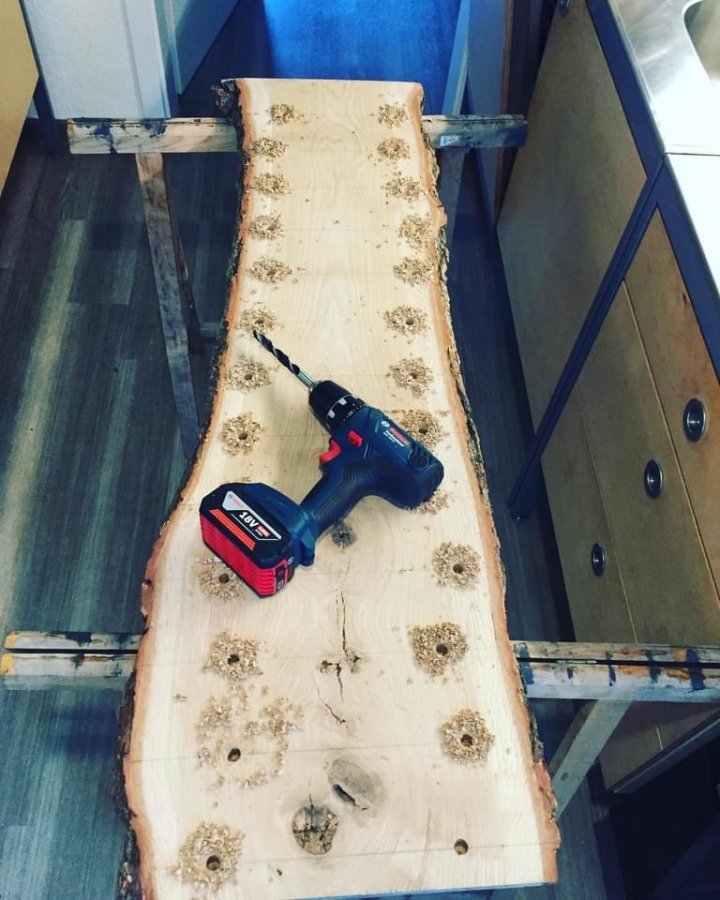 Very nice! It looks like a bit of a reach to grab a petty though...

What's the knife third from the bottom?

timebard said:
Very nice! It looks like a bit of a reach to grab a petty though...

What's the knife third from the bottom?
Click to expand...

timebard said:
Very nice! It looks like a bit of a reach to grab a petty though...

What's the knife third from the bottom?
Click to expand...

It would be easier with gogo gatscheto arms

nah, it‘s no problem at all

..besides i never use the small petty 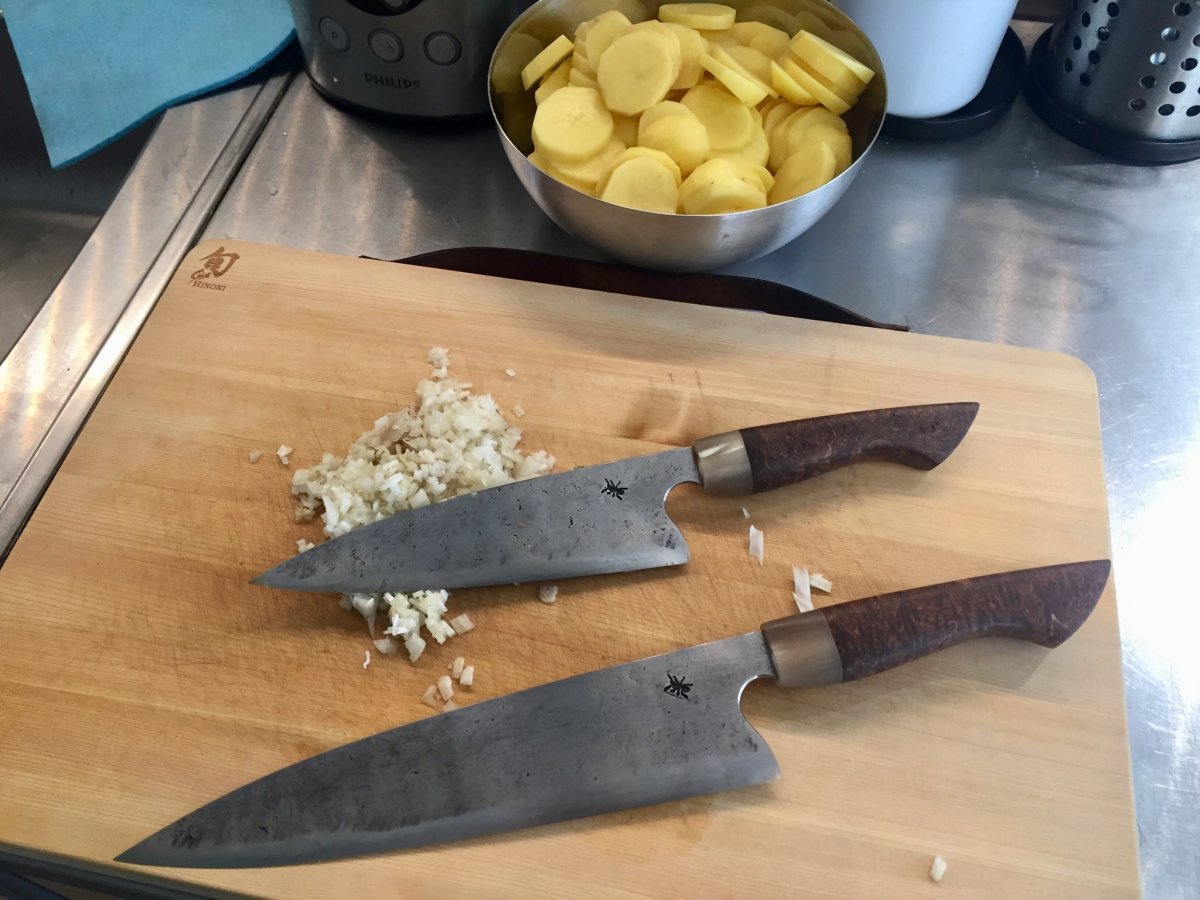 Are you also holding the knives with magnets? Or just the dowels? It’s looks great by the way.

It doesn't need magnets. In the worst case, the knife can tip over and stay put

It doesn't need magnets. In the worst case, the knife can tip over and stay put

I was gonna ask the same thing. Good idea making the pegs long enough to support the knife if it tipped.

I’m having one of these built currently, so your build has helped me get an idea of what I’m working with. Thanks for posting! Should be pretty much the same overall dimensions as yours, except for cleavers instead of gyutos. I figure I’ll be able to fit 8, and we’ve decided that we’re going to have a magnet set in such a way (or maybe just weak enough of a magnet) so that it’s not a very hard pull, but just giving an extra layer of protection. For cleavers especially, considering how far the legs would have to stick out… this seems appropriate. We’re also mulling over the possibility of displaying both knife and saya together, but separate of each other. We’ve imagined either grooves in the pegs that allow the saya to sit behind the knife, with the grooves holding the bottoms from sliding, or even a recessed cutout behind the cleaver. The latter poses more problems, especially since the cleavers/sayas are all different sizes. Excited for it to come together, whenever it does. Had to hunt for ages to find a local woodworker that is able and willing to put out quality work, since I don’t want to ship anything this big or valuable. Any suggestions for my saya conundrum are greatly appreciated!

Hi @cooktocut , I'm very happy that you like my construction and you're building it! I think magnets are great and they will definitely help to make the knives a little safer. you only need it on one side. Since the knives don't lie flat on the wood, I would use stronger magnets. My legs stick out 6 cm. With a Saja I would tend to 8 cm. The Magenete will not help with a Saja. A distance of 12-15 cm from blade to blade would not be bad. So a cleaver would also have space. I'm having one built at the moment and don't know how to put it on the rack yet. an idea i already had is to put rubber shrink tubing over the wooden pins. this ensures that you cannot slip to the side so quickly. They don't cost much and are quick to install. the hoses are also available in brown.
I'm curious how you solve the Saja problem and I'm looking forward to seeing your rack. Good luck with that. Greetings Klaus

Ooh, I like that rubber idea. Way better than fiddling with grooves. Thanks!!

As for the magnets not working with the sayas, yeah that was another problem I forgot to mention. Maybe if it was strong enough it would pin the saya to the wood also, serving a dual purpose, but yeah probably would have to do away with them completely in that case.

@cooktocut ...I also think that if the knives are to be really tight, they should be without saja.

also consider sealing the wood. I have taken natural crevice oil. Because, for example, oak contains tanning agents that could react with the carbon steel. There would then be black spots on the wood and the knives would rust faster
You must log in or register to reply here.
Share:
Facebook Twitter Reddit Pinterest Tumblr WhatsApp Email Share Link