I have seen the work of this Thai smith making this really cool looking knives for what seems to be quite fair prices.

Do any of you have any experience with them so you can share some thoughts about this guy's work?

Post sone of his work, not familiar with him.

I’ve been following him on IG for a few months. Definitely very cool looking work. His blades used to have the cladding running all the way to the edge, but his newer work is cleaner with more core steel exposed. I believe he’s based in Thailand or maybe Vietnam which would help explain why his prices are relatively low.

I checked with him on doing a set of steak knives but after a few messages he stopped responding. I think he got a commission to do knives for a hotel so I assume he’s focusing on that. I believe a store in australia was carrying his work, chefsedge.au or something similar sounding. He looks pretty young so I suspect he’ll be around for a while, hopefully continually improving.

I haven’t seen any reviews of his knives anywhere, and seemingly like 99% of makers who market through IG he includes very few specifications on his knives when he posts (or on his website)j so it’s hard to predict what they’re like. I’ve been tempted to try one out, but in the price range of around $300 there’s many really nice j-knives and also established Western makers like Spare, Smedja, Andrei, which I’ve been trying first since they’re easier to pass along on BST.
N

Anybody know where he is located in Thailand? I have contacts there but I need to know where to point them.

Noodle Soup said:
Anybody know where he is located in Thailand? I have contacts there but I need to know where to point them.
Click to expand...

You can try contacting him on Facebook. He answers after some time though.

This is actually the one that grabbed my interest. He asks $430 USD for it. Hence why I'm researching on him. Otherwise I will go with a Nigara Hamono R2.

I am a professional knife maker living in Thailand for about 4 years.I make knives for sale and custom knives are shipped all over the world. I do everything right step by step. To get a good knife

I have ordered a knife from him. Here's mine:

Overall, doing business with him has been really good.
When the knife arrived, DHL broke a small piece of the handle and he was willing to take it back for repairment. When he was late with the order, he apologized and made a saya to make up for it.
He spoke good English so you can feel confident to communicate with him.

Regarding the quality of the knife, I don't feel that I'm qualified to judge. But from my experience, it's a well built and good looking knife. Nothing jump out regarding the steel or the grind. Here's my effort to take a picture of the grind: 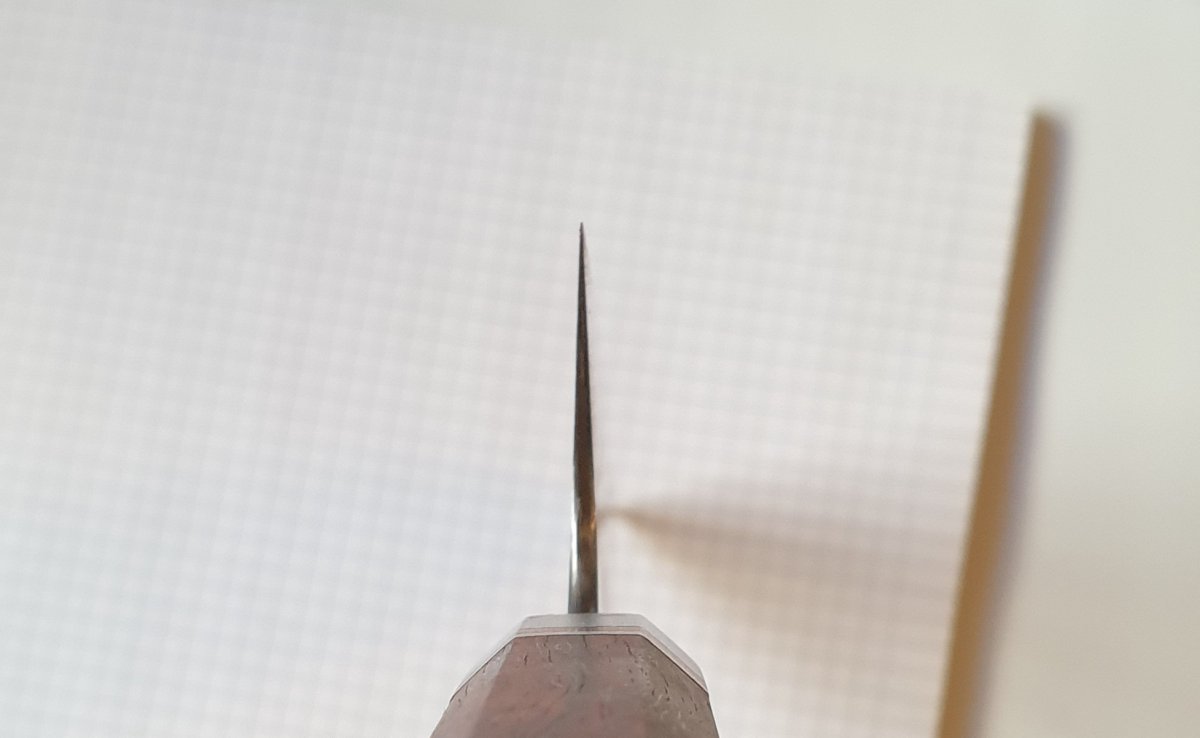 Ok, so now I know he is 4 hours north of Bangkok by car. Kind of out in the middle of nowhere. Still, might make for a road trip if I can figure out the Thai covid rules.

I purchased a gyuto/nakiri pair from him with s-grinds in 52100. They had a nice hand sanded satin finish to them and were incredibly thin at the hollow, which worried me at first. They really are nice cutters and that concern is no longer one. For the price I paid for a matched set with saya, I'm very happy with them. So much so that if I got one at the price point for the pair I'd think it was a good value.

Pardon the bad phone shots, but here are some pictures of the pair. Removed the patina on the gyuto about a week ago. First choil shot is the nakiri, then the gyuto and I tried to capture the distal taper on the gyuto. It's not as pronounced a taper as on a Kamon or Markin, but it's much thinner out of the heel with a nice continuous taper up to where it meets the grind towards the tip. Can't recall the exact price and they may have gone up since then, but it was definitely under $500.00 all in with the saya.