What's the deal with Takeda knives?

I’ve owned a Takeda AS Gyuto since 2011, when the tsunami of bullhype around these blades blew so hard that a few even belatedly reached one of the two retailers on this backward isle. As someone suggested earlier, these were quieter times in the J Knife world— hell even Glestains seemed vaguely still interesting back then- and the chance to pick up a named smith’s work in a larger size seemed far too good to pass up

I’ll admit to being a little discomforted when my Takeda arrived. It was a whopping outsized 240 (250+), with a heel taller than my nakiri at 65+. And whilst it looked appropriately mean and rustic, if felt strangely 2D and light when i pulled it out of its packaging, as if a passing steam roller had just flattened a smaller and more purposeful knife. I expected a butch, rustic blade that would plough though produce, but this thing felt together altogether much more frail, lacking the heft to do the work expected.

I thought the profile sucked on first use, and I’m still much of the same opinion. The weird surface area/low weight ratio and thinness of the blade implies laser, but this big flat ugly porpoise of a blade felt nothing like as nimble as that. You’ve basically got the big flat spot at the heel, which only gently curves until it reaches a bulbous snout - even a few cm away from the tip this thing was still higher than many of the tallest point of many of the Sakai knives I was accustomed to. All that metal just felt unbalanced and awkward in my hands - using it on my undersized, overcrowded kitchen counters seemed unnecessarily challenging, like an anorexic ballerina choosing to flap around Oxford St whilst wearing a sandwich board in a mild gale. 10 years later and it probably remains my least used gyuto as a result.

Yet despite all that I don’t dislike the Takeda, and I can totally understand why good people rave about its cutting qualities. It does sharpen easily to a ridiculously keen edge, perennially achieving that pointlessly satisfying stick in board thinness. And given the right produce and mission it provides an unparalleled experience - aim it as some greens and some field mushrooms (for example) and there’s a weird, detached weightlessness to the way that giant flat heel silently scalpels down on produce. Get it right and a pile of perfectly sliced veg silently and magically seems to appear in front of you, with none of that sticking and rolling around the board nonsense.

Either the profiles have changed or I have two outliers, but neither my 210 nor my 300 gyuto has any flat spot to speak of. When I first got them, I wasn't used to this kind of profile and it was accordion city whenever I cut things. But I quickly adapted to it, adding a subtle rock to my chopping motion, and that took care of my issues. This also got rid of any similar problems I had with other blades which was an unexpected side benefit.

I'll also throw out that I really didn't care for the kogatana -- at least as a kitchen knife. It's just way too thick behind the edge to do any sort of paring knife work, and was a total wedge-monster when I used it on the board.

+1 on the kogatana comment. I think it would suck for use as a paring knife. For many non-food prep jobs in the kitchen like opening vacuum sealed packages I find it very useful. Others may differ and have a different approach which is great too.
M

I have a 210 NAS Sasanoha. It is such an odd knife. Thin, almost flexy, with an axe like grind.

It's the king of food release when you're cutting soft foods like mushrooms. It definitely feels wedge-y on denser items like carrots, where you really need to be actively slicing on your cuts.

The steel and heat treat are great... it's just the grind that's weird.

Currently it's not taking up a spot on my knife strip, and it's back in the box.

labor of love said:
I dunno. You either enjoy cutting food with an Axe grind or you don’t.
Click to expand...

I tried one, they are not for me

btbyrd said:
Either the profiles have changed or I have two outliers, but neither my 210 nor my 300 gyuto has any flat spot to speak of. When I first got them, I wasn't used to this kind of profile and it was accordion city whenever I cut things. But I quickly adapted to it, adding a subtle rock to my chopping motion, and that took care of my issues.
Click to expand...

You made me doubt myself for a bit, but I dragged the old beast out tonight and there’s definitely about 10cm of flat at the heel, followed by a very gradual rise. I wouldn’t have expected Takeda’s profiles to be consistent to be fair. Hurriedly taken, not so helpful, pic below.

For the sake of accuracy, my memory seems to have exaggerated the heel height a bit. It’s actually ‘only‘ about 63mm high 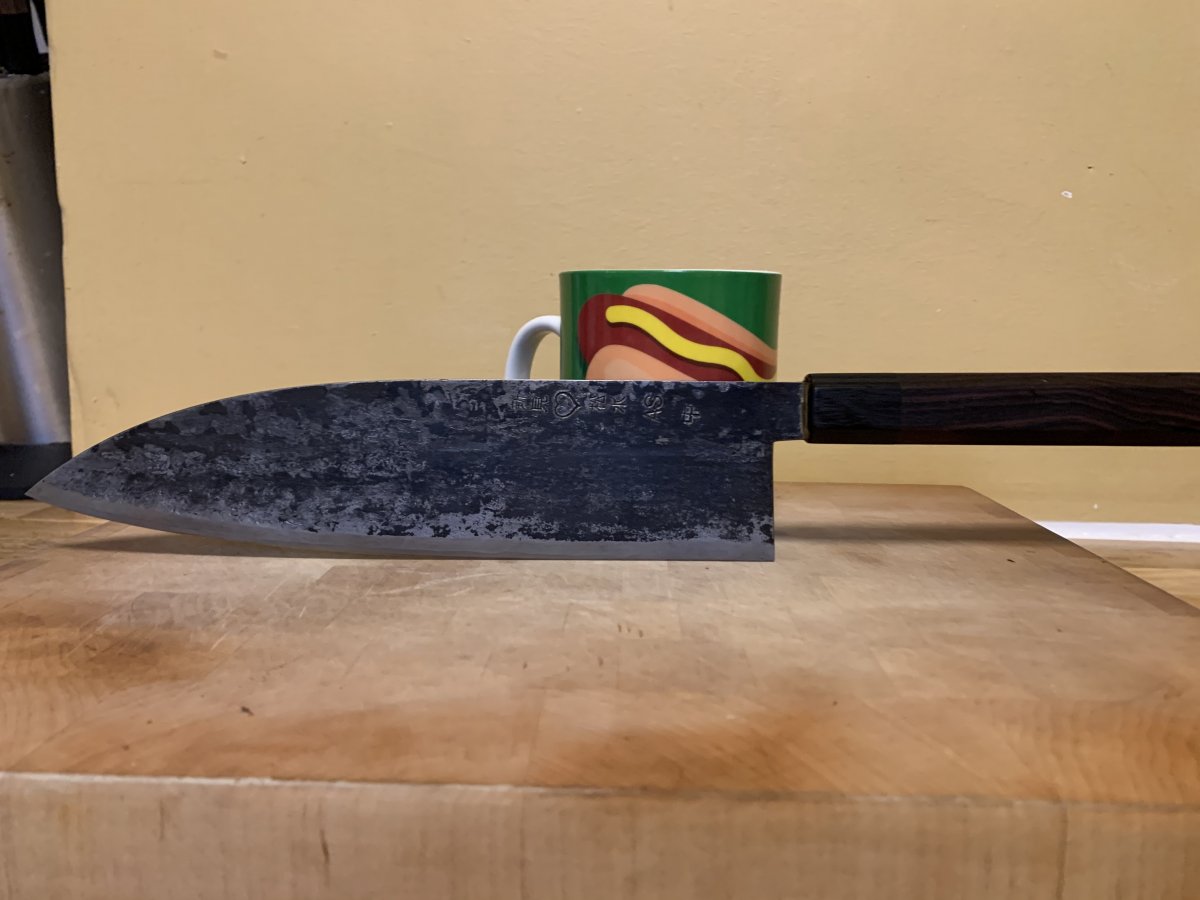 I was going to try one because it looks super thin and tall, it would be good for vegetables, but some also said it wedges badly, especially I cut carrots often so gave up hope for it.

I think the thing about Takeda blades being massive wedgemeisters is a bit overblown imo, or at the least mine doesn’t tend to provide the resounding cracks when cutting through oversized carrots you’d expect from such a reputation. But there’s definitely a marked change when moving from soft to harder produce as mushy_pork suggests, One second you‘re gliding weightlessly through veg (with a slightly goofy smile on your face), but then something marginally harder seems to provide sudden friction and resistance to a surprising degree (illusion blown, smile gone).

To a certain degree the profile, balance and lack of heft aggravate that feeling. I find myself babying it to an extent and holding it differently than any other gyuto, so the transition to ‘actively slicing’ seems really marked and a little forced given its ease in cutting other things. I suspect more confident users with more precise knife skills may have a better experience than me.

Best use for the Kogatana IMO. 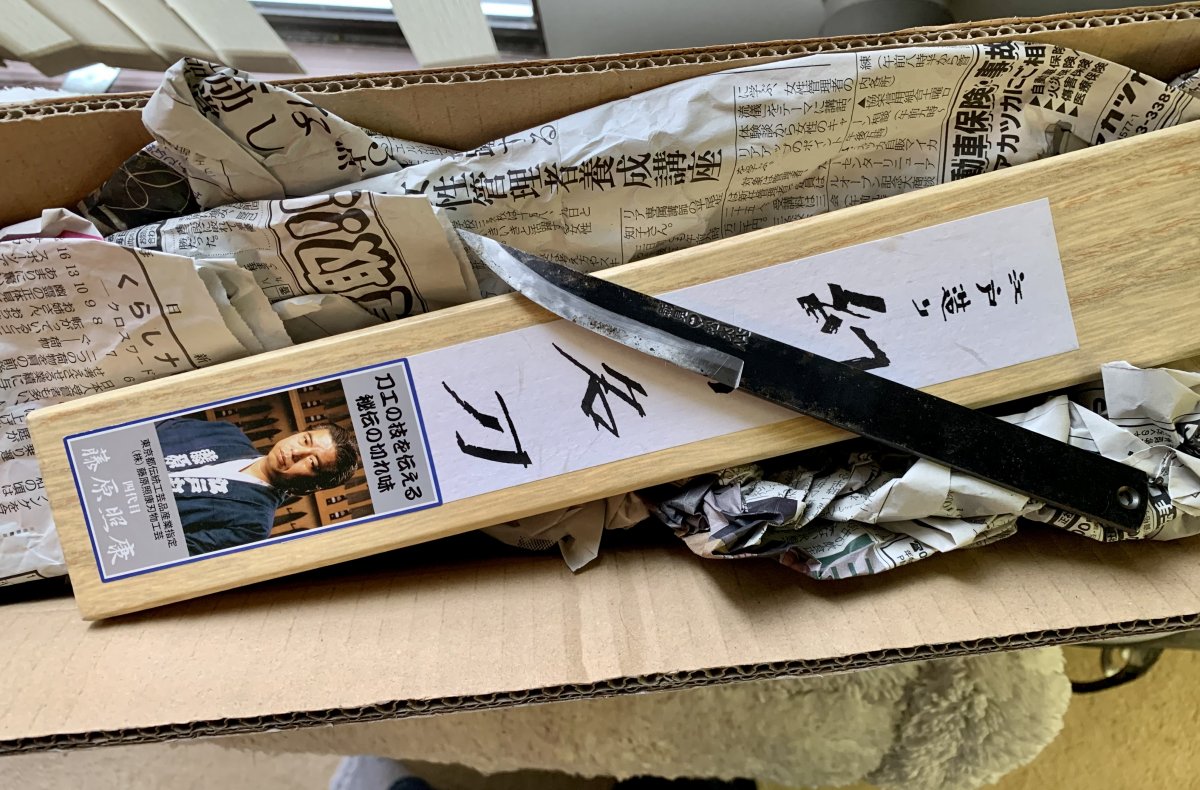 I guess I could pull out a Shig or Kato or Maumasi to do the same job but the little Kogatana is handy, always sharp and a LOT cheaper. Now ... let’s have a look at the TF that just arrived!

Man, you had a Kogatana out near that box and your hand didn‘t accidently slip towards that smug face? You disappoint me

Look at his eyes taunting you, me, you, us.

Jason183 said:
I was going to try one because it looks super thin and tall, it would be good for vegetables, but some also said it wedges badly, especially I cut carrots often so gave up hope for it.
Click to expand...

Me too, I hate wedges when cutting carrot.

I must admit that I have a lot of knives. Gyutos especially! With all the fuss over TF’s work I figured I had to step up to the plate and try one or two for myself so that I had my own experience to judge them by. In my view knives are so personal that I really can’t completely go by others comments. I like to have my own experience to draw upon. I guess the thing is that the makers, TF and Takeda included, have their own vision when they forge a blade. I like to try to get in touch with their vision. I’m not a pro or work in a commercial kitchen so I have the time and inclination to try to understand what and why the makers make what they do. Otherwise I would just stick to a Myabi Black Gyuto and save a lot of money.

Brian Weekley said:
I must admit that I have a lot of knives. Gyutos especially! With all the fuss over TF’s work I figured I had to step up to the plate and try one or two for myself so that I had my own experience to judge them by.
Click to expand...

Let us know how you get on. For all the hyperbole and daft banter, I’ve owned a couple of TF Mabs and thoroughly enjoyed both of them - grinds seemed good in my case and I didn’t expect perfection with F&F (which is fortunate as both handles are a bit shoddy).

FWIW I find TF’s less unique than Takedas, which is less of a backhanded compliment than it first appears. I love cutting certain things with the Takeda, but it’s pretty darn poor at others comparatively, to the extent that I rarely get through a board of prep without reaching for another knife. The same‘s not true of the TF I still own, which is a great all rounder, certainly comparing well with many of my faves in pretty much every category. I’m generally a wa handles kind of guy, but the balance and that finger notch on TF definitely works, and the steel/HT is definitely damn good.

So yep, I can see the appeal of a denka and I’m almost certain it’d be a great blade to have. But I’ve also dithered for so long (a mere decade or so) that the eternal debate over the same inconsistency Issues slightly grates. It just seems a bit of a predictable gamble, plus I can’t help feeling that I’d rather push my money towards a more deserving maker who doesn’t turn what should be a premium experience into so much of a lottery to begin with.
You must log in or register to reply here.
Share:
Facebook Twitter Reddit Pinterest Tumblr WhatsApp Email Link