Difference between Chotaro and the many other Tailor scissors I've tried:

Peak sharpness is higher. The handle loopholes are slightly bigger and angled better. The smoothness of the movement is far lighter and more continuous. Much much less of the binding that occurs sometimes as the scissors are closed. The blades still make continuous contact with another though. The very tip increases the curve slightly, or pressure against each blade, for stronger contact, so that the tip can still cut without splaying apart. This pair has the higher end hardware I've seen on scissors -- which are nickel colored pivots that protrude farther for more contact at the wrench location when adjusting the blade. Some others have it too, but most don't. As for compared to other Japanese forged tailor scissors -- the curving isn't done quite as well, and the sharpness doesn't seem quite as exquisite, and the lightness in cutting isn't as good. But materially, they are mostly similar, and good enough for most people.

These do feel nicer in hand compared to Shozaburo deluxe I've had, and they do cut better by a tier or two. Action is lighter as well. Steel feels like white 1. I haven't sharpened it though, so I can't give any detail on how it is, aside from that it seems very hard and sharp -- and more so than the Shozaburo deluxe.

The scissor blades have minimal rust-- only at one small spot at the cutting bevel at the tip. The pivot does has patina and pitting. The tips have a kasumi on the spine. The blades don't seem to be sharpened much from the user before me. When I bought them, I had learned that the scissors had been adjusted by the then-existing generation Chotaro.

If I have to compare Chotaro to anything, it would be the high end Tokyo chisel and plane blacksmiths, since Chotaro is their peer in scissors blacksmithing.

Information about the third generation Chotaro

Information about the scissor blacksmith lineage 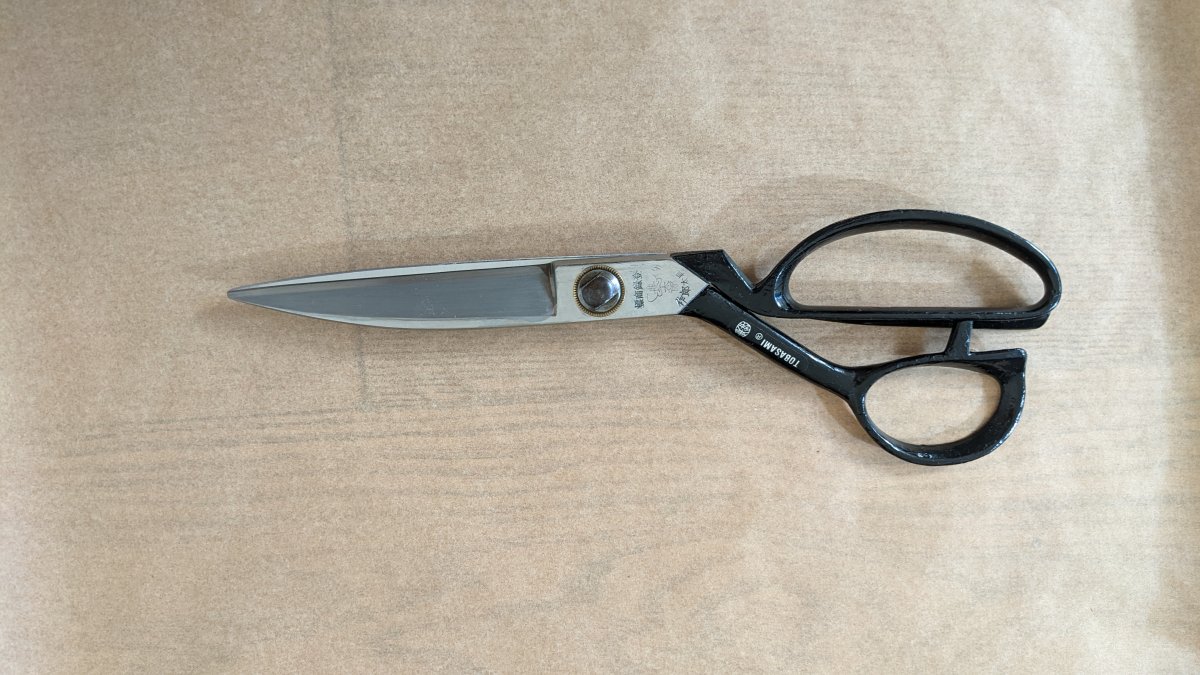 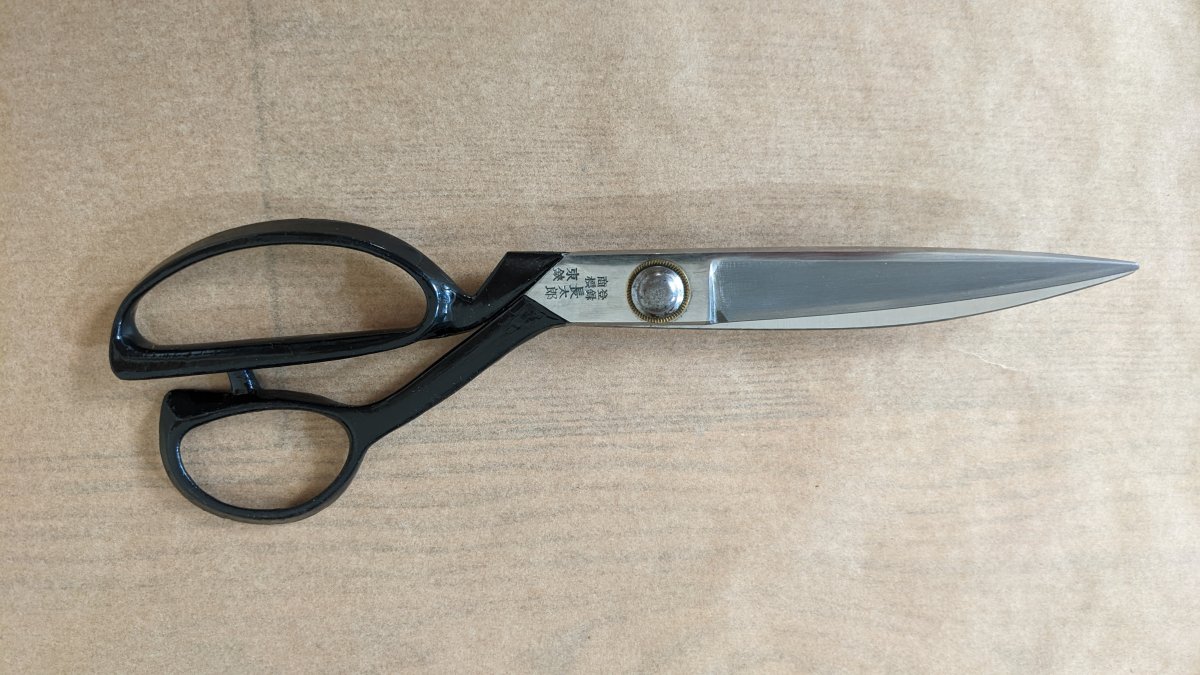 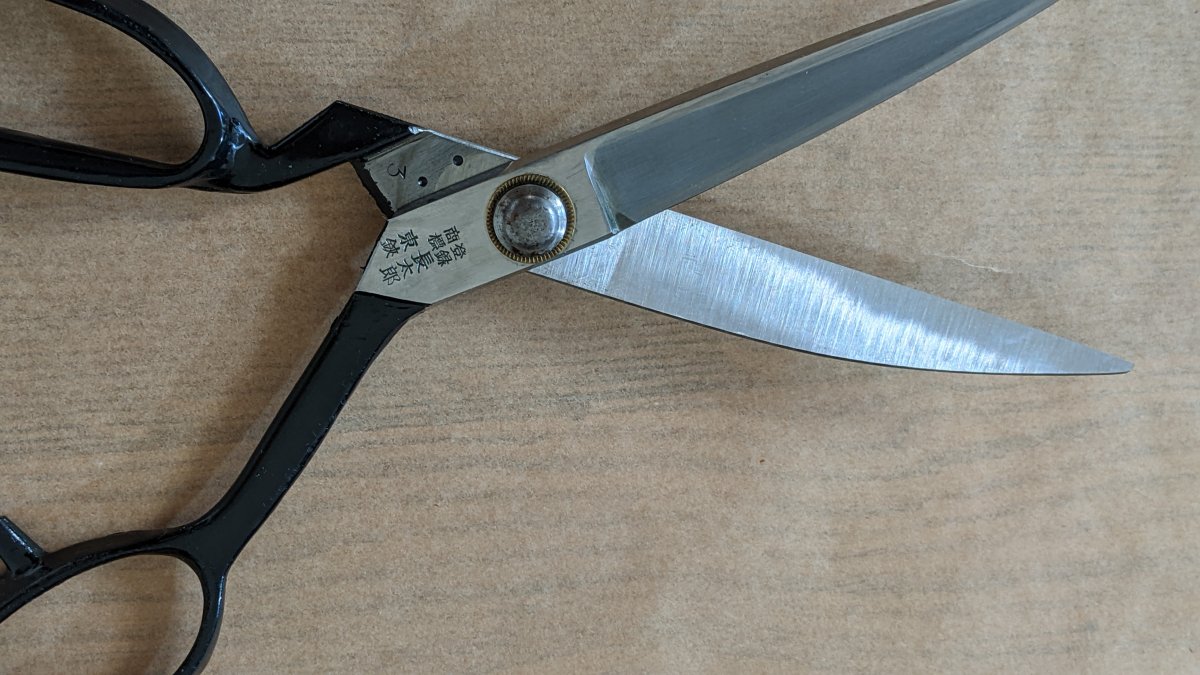 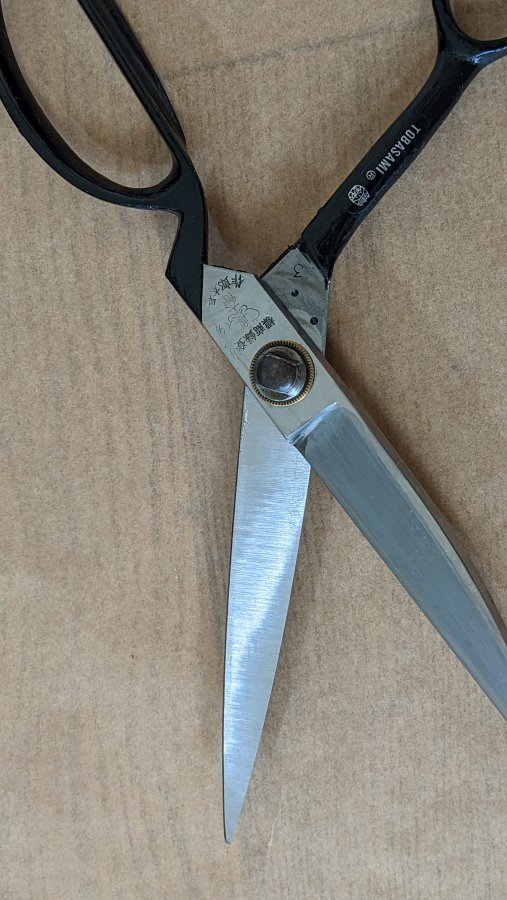 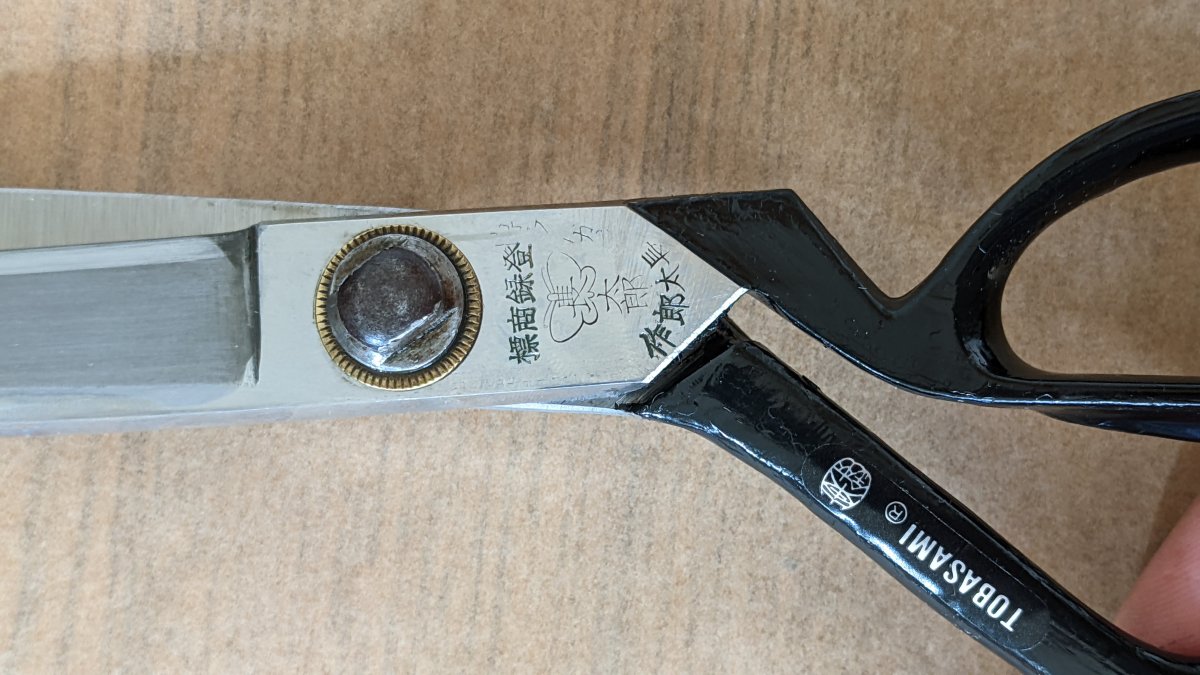 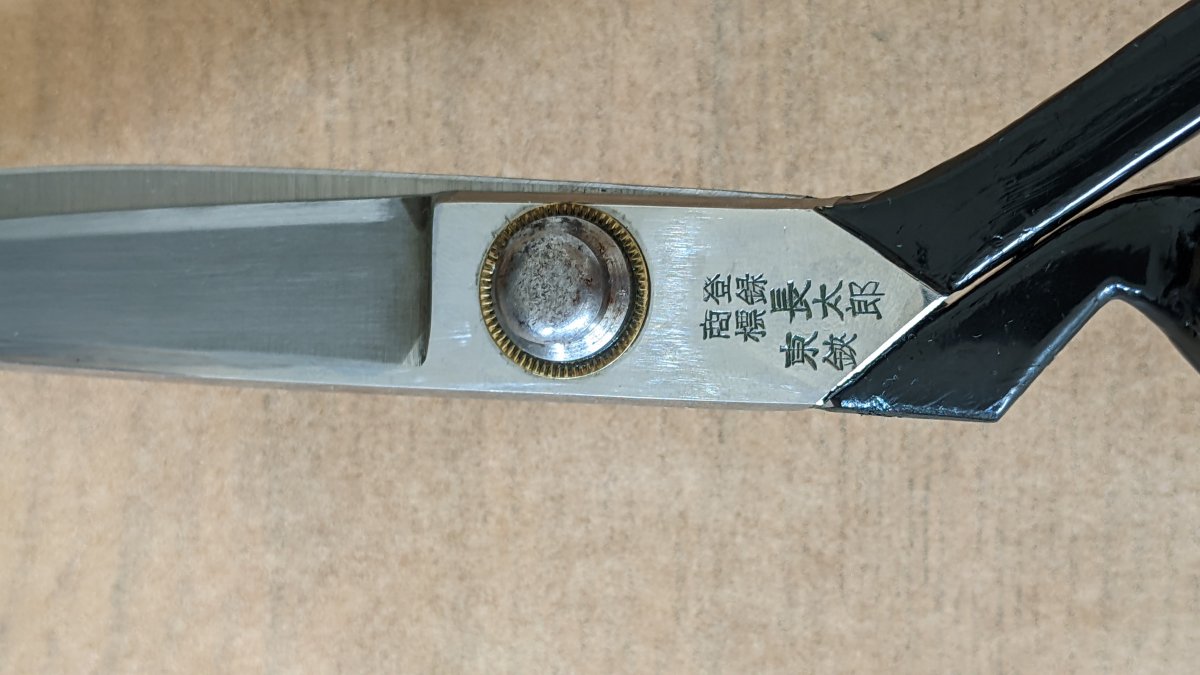 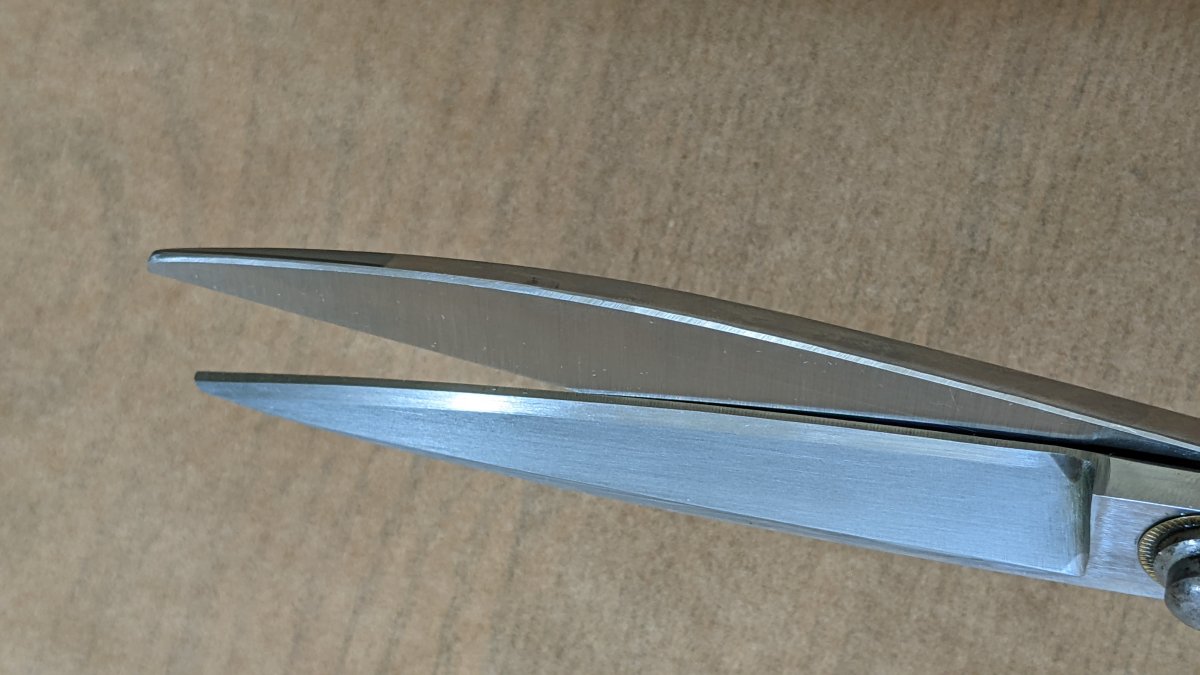 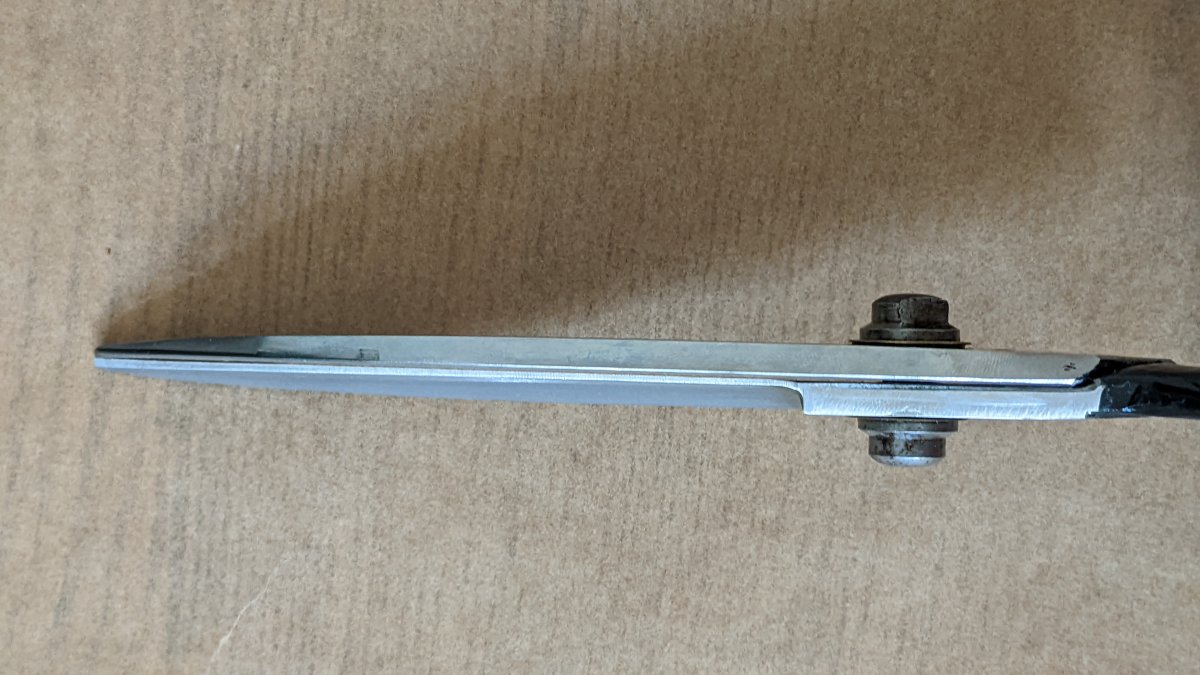 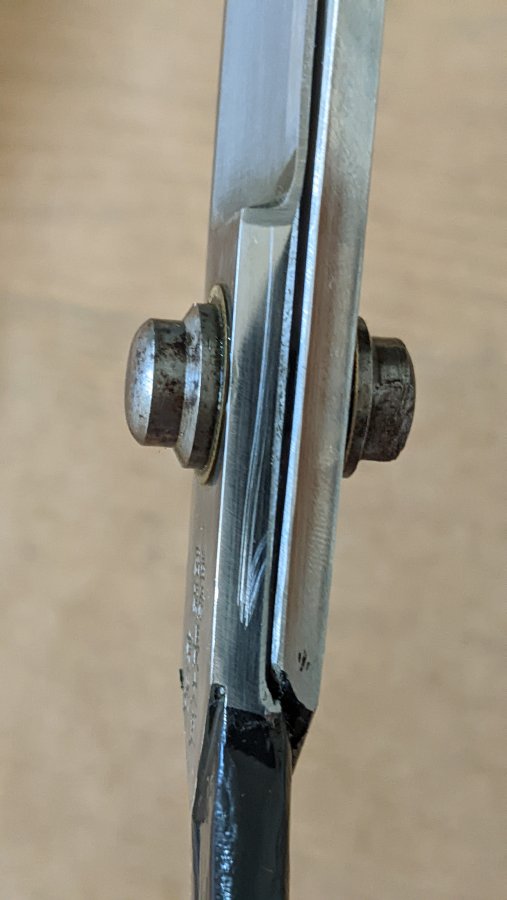 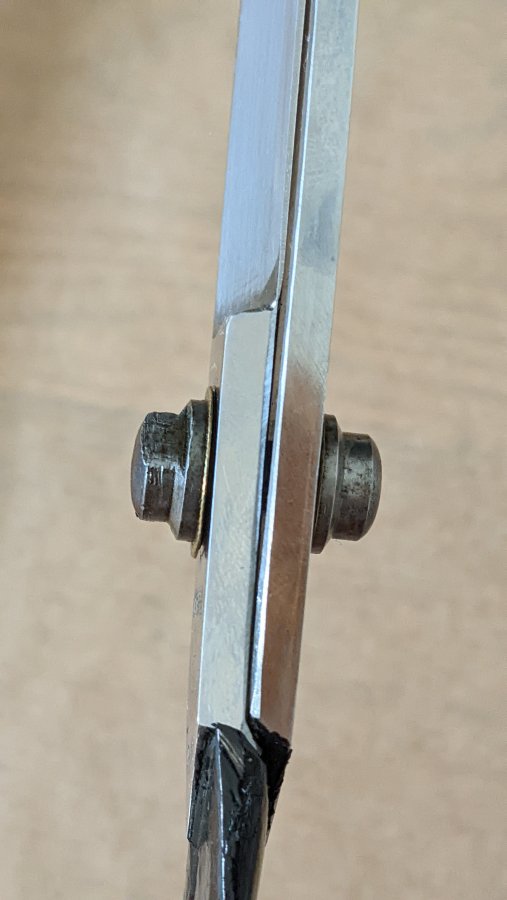 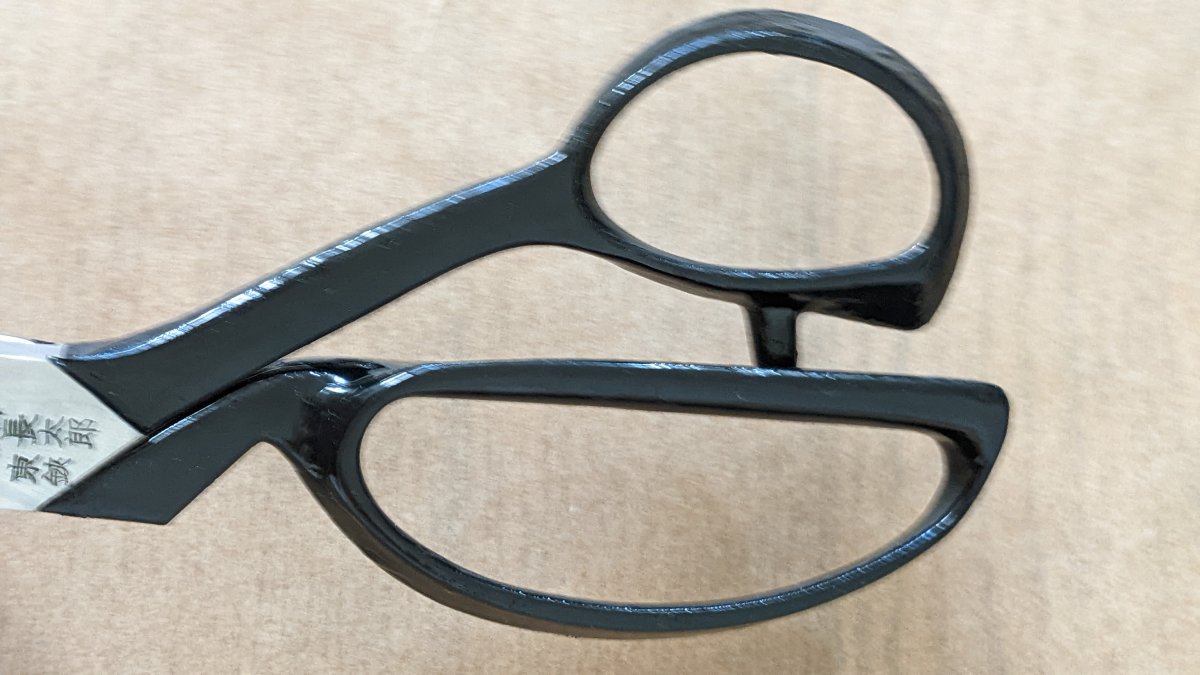 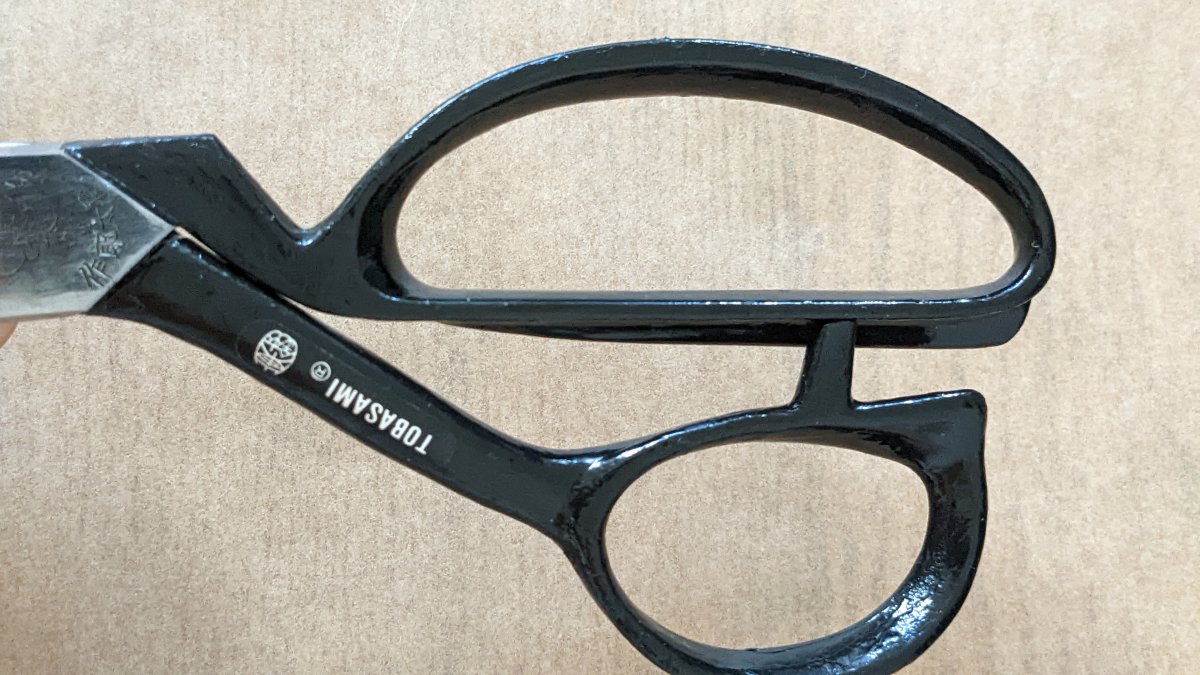 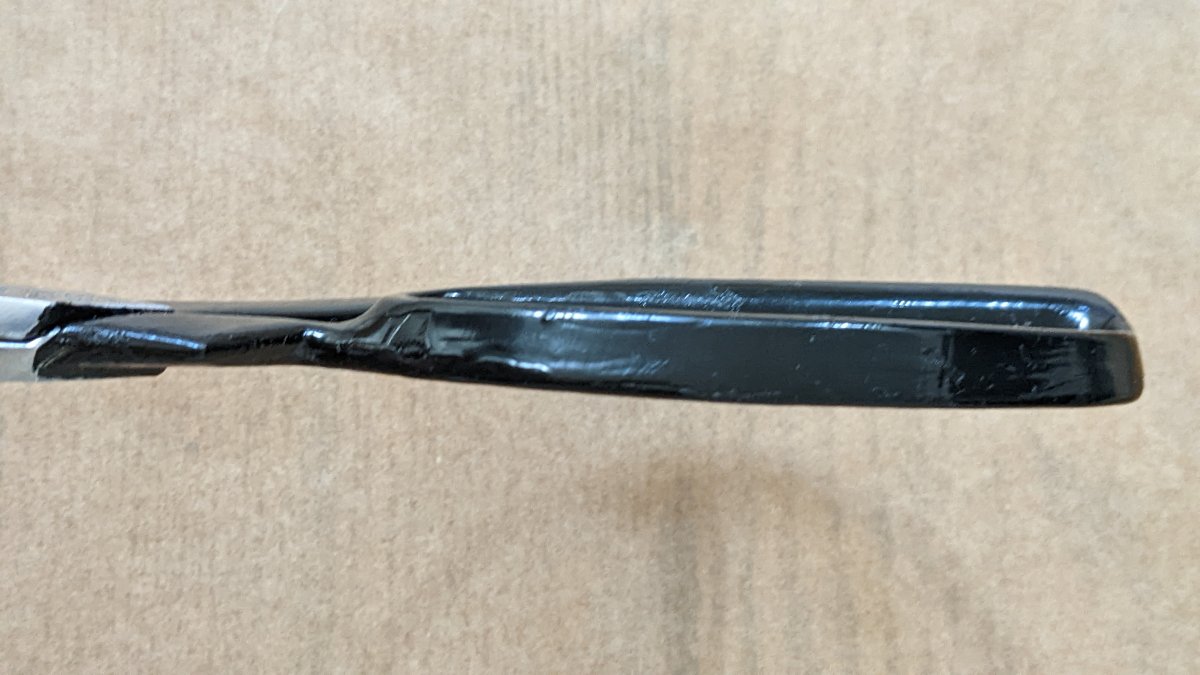 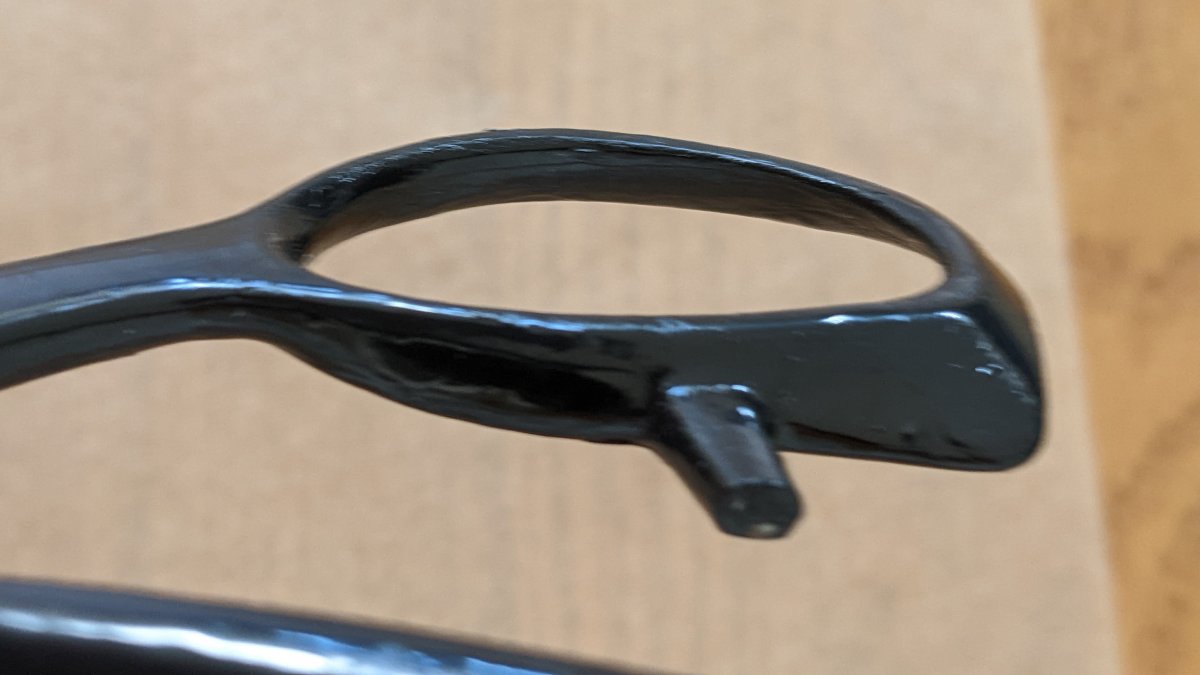 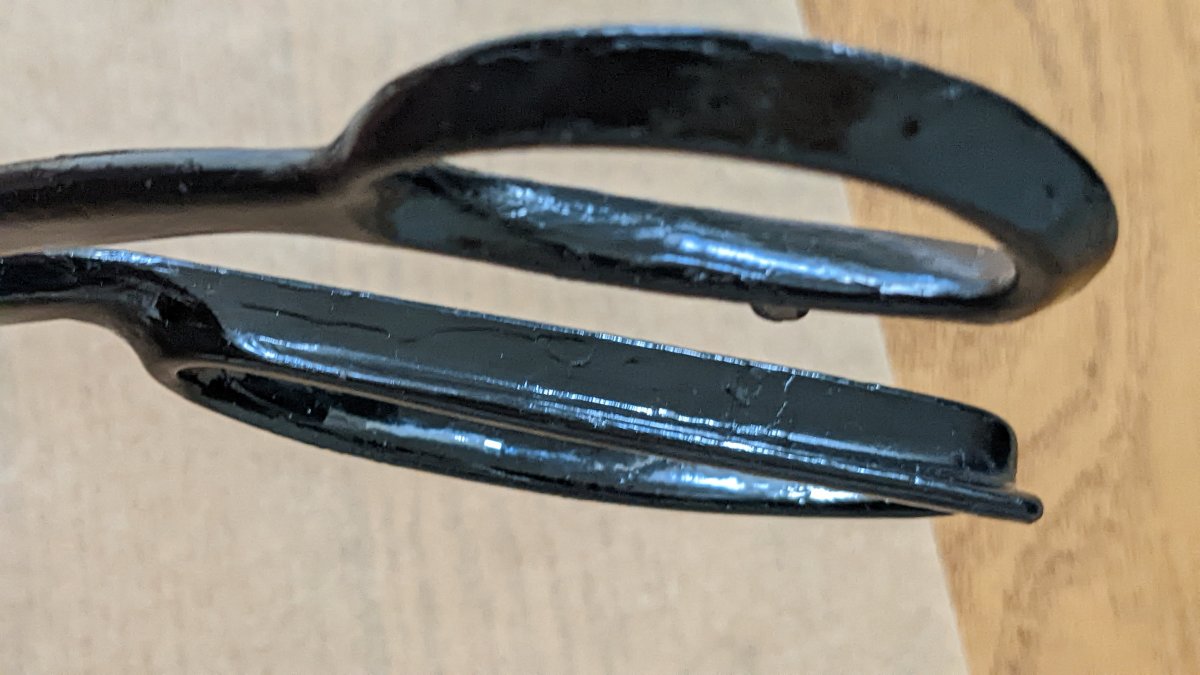 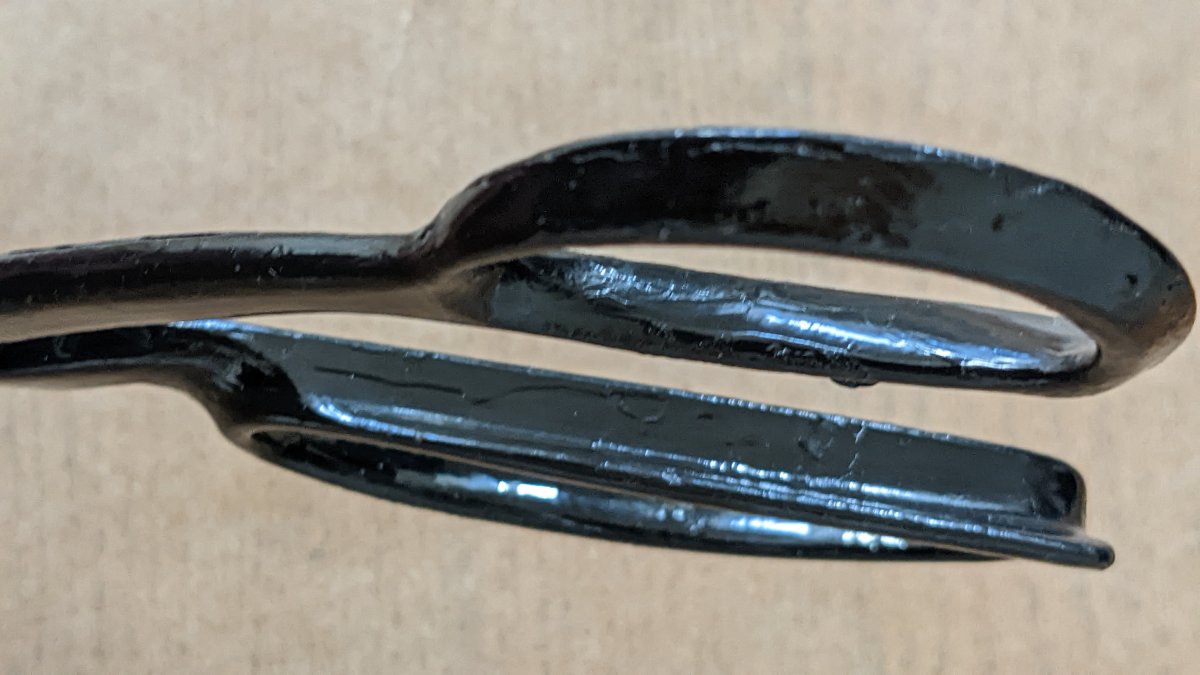 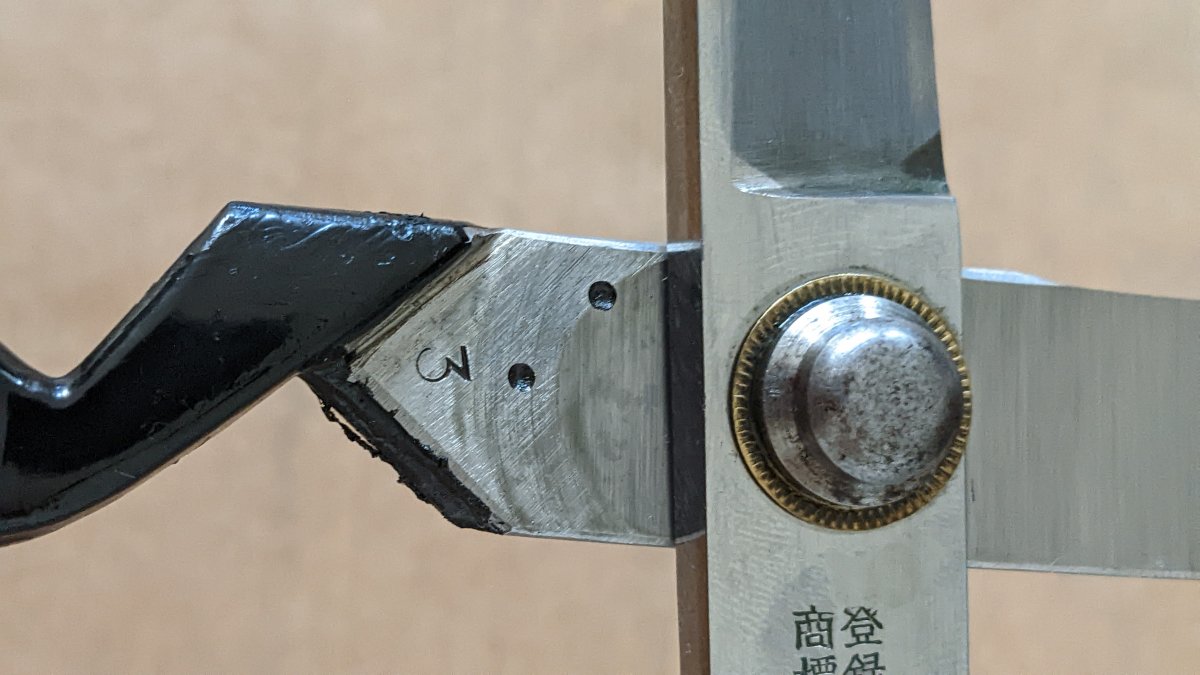 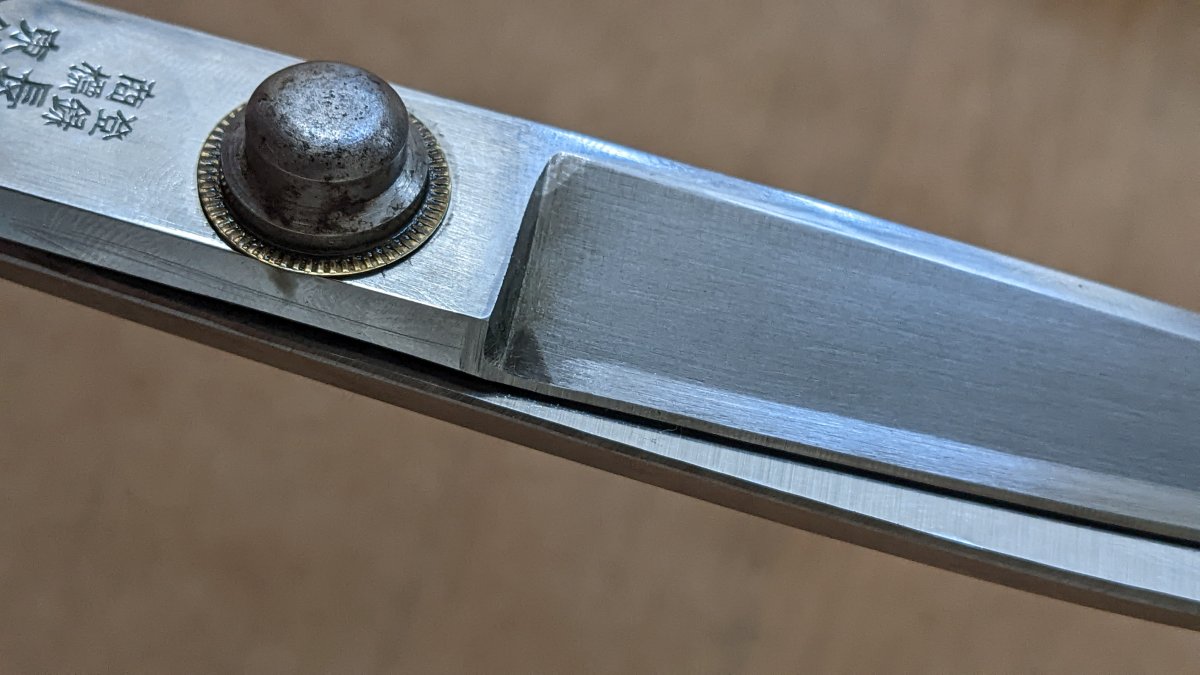 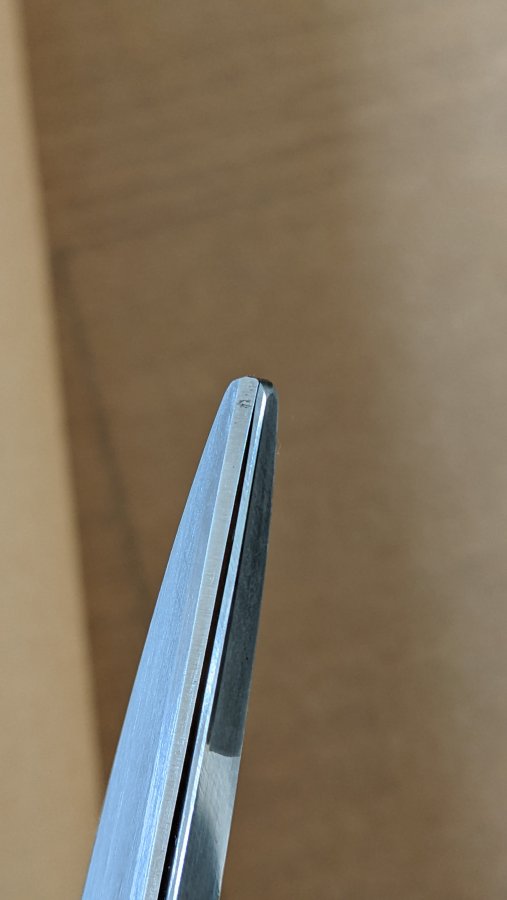 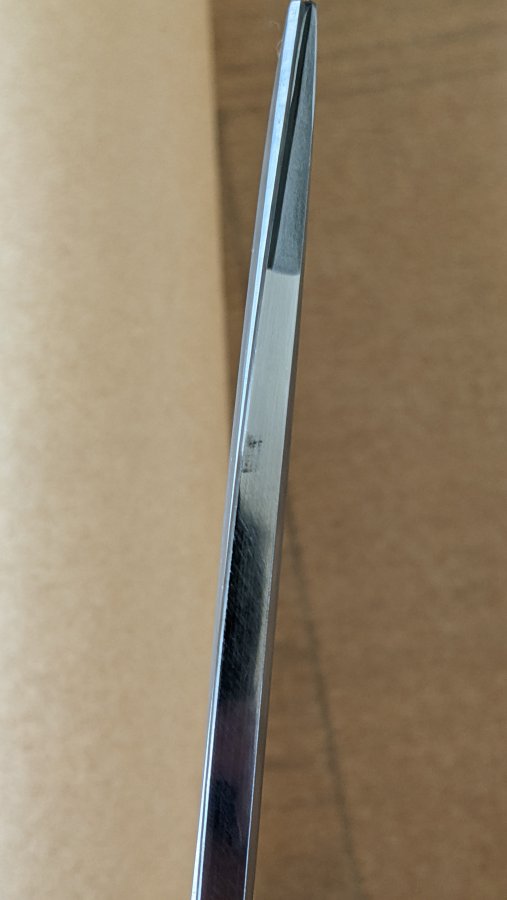 Looks kinda simple but I tried other scissors too, and the chotaro still cut the best, and without the cloth slipping between the blades. 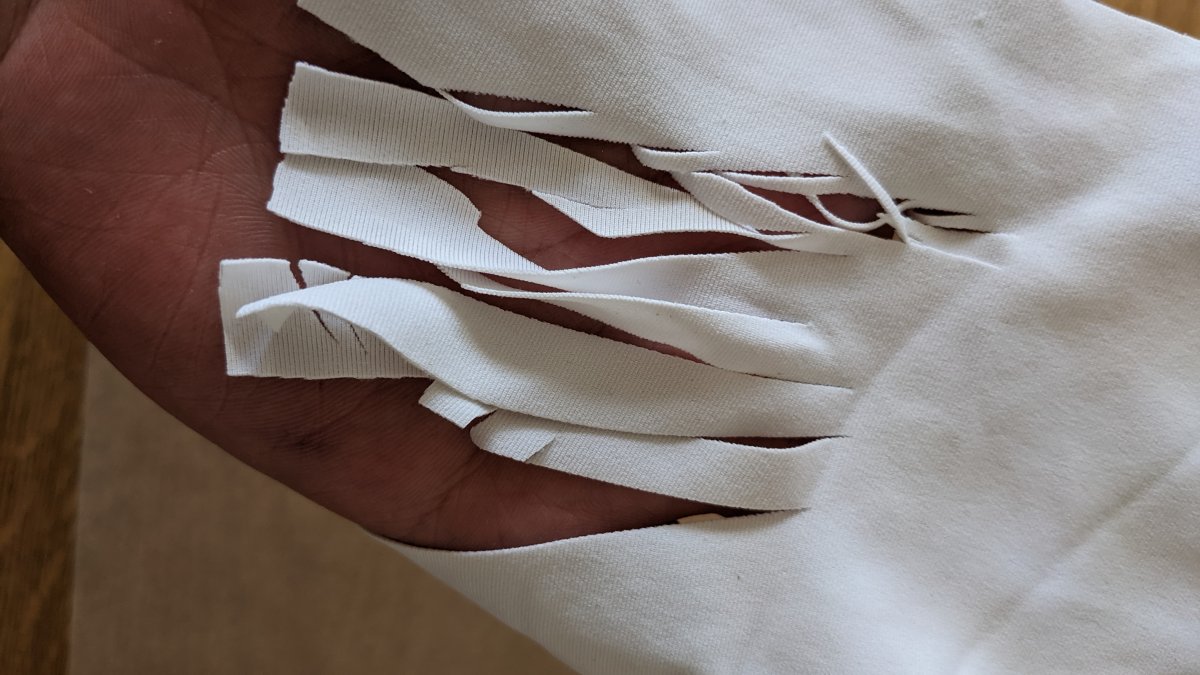 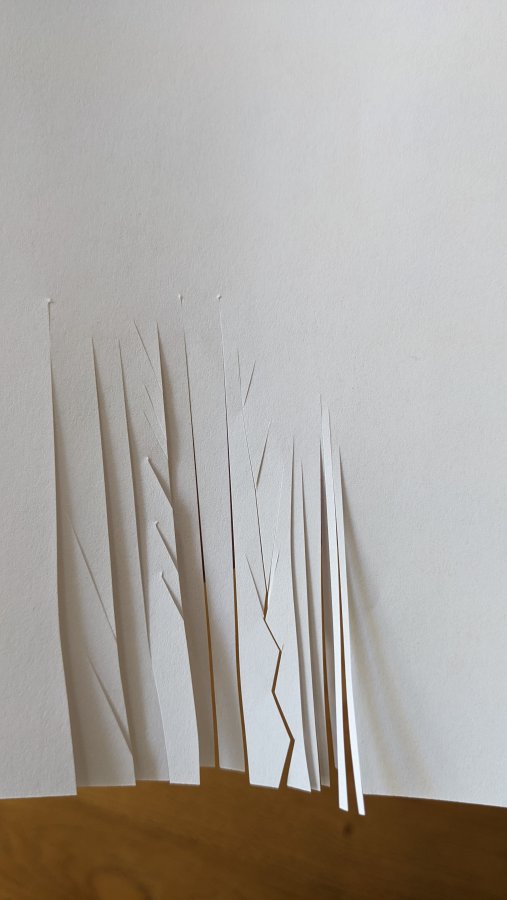 Would you consider trade for stone. I ve couple great stones which are redundant to me...
R

Stones trades -- not at the time since I'm downsizing.

Stones trades -- not at the time since I'm downsizing.
Click to expand...

Razors and knives -- got enough of them, sadly (or happily)

The Chotaro scissors aren't unobtainably rare in Japan, but I haven't seen them much on the English web -- similar to Kamijo razors.
R

I don't think I can overstate much how well these scissors cut.

The most similar I guess would be a 270mm denka I had years ago, but with perfect balance and responsiveness. The denka felt a bit clunky.

Free returns, and I'll make a label you can print out

I’m extremely curious as to why you have these to begin with and what experience you have with fabric?
R

Chotaro was supposed to be the best blacksmith for tailor scissors of all time in Japan -- or at least so near the top that comparison to anyone "better" wasn't necessary. I brought them to JKI for Jon to try and he did agree that they were better than the tailor scissors that he has in stock, if that price point means anything. I also had the other guys in the shop try it too, to good results compared to the blue 1 scissors in stock.

The action is absolutely amazingly light. . . I'll try to take a video of it. Listen to the "shink!" sound as the scissor closes. That is the sound of blades contacting.

Now, tailor scissors can be made to cut well. . . I've been sharpening some cheaper ones and they can cut crisply too I think, but the action is not as nice.

Uh. . . hmm. . . why I have these -- it's because I like blacksmith tools. Chotaro is a blacksmith lineage I had been able to learn about, and it goes quite a bit way back -- it actually has a lineage I can trace online. I can't say quite the same thing for some kitchen knives sometimes.

It is also connected to the industrial revolution in Japan, with the introduction of the booming textile industry for both new domestic clothing, and cloth shipped abroad. So it'
s this blend of old and new and history -- since roman style scissors were one of the earlier places that swordsmiths went to, when making swords wasn't viable to make a living. I think that was in the 1800s, but I don't remember exactly.

Basically, it's worlds apart from other scissrsors. Not of course, absolute magic, but it's the most magical blacksmith tool I've used. I just wanted to try it once, as with many other things (like the honyaki . . . . or tamahagane or togo steel).


With fabric -- like I've described, the cut is light but it bites and stays and the blades don't separate. Often times, especially with thicker or more pliable fabric, the blades push apart, and the cut is not made. Or even with thin plastic.

I mean -- hey! If you want to try it, I can send it over for half the price, then you pay the other half if you decide you want to keep it. I know you guys are incredulous scissors "can really be that good" but there are kitchen knives that go up and up and up in price. But these scissors are that good, and I'll bet my reputation on them. Just let me verify the address with one more person on the forum, and I'll send it over.

There are many that have Chotaro in the name but only as reference to the lineage, not that they are made by chotaro
R

Ok a little stupid but $190 shipped conus. Cheaper than the Japanese market price, and only $20 more than the tailor scissors at JKI
Last edited: Mar 20, 2022