I bought this knife a little while ago from DrNaka. It's a great knife, but I need to sell it if I'm ever going to buy myself a 270. Here are the specs:

Edge length: ~245mm
Height at heel: ~53mm
Spine at heel: 2.8 or so mm, almost 3mm
Spine at midpoint: just a hair under 2mm
Spine 1in from tip: just a hair over 1mm
Spine 1cm from tip: .7mm, a little under 1mm basically
Measurements of the grind: 1.5mm at the midpoint between edge and spine and just a hair under 1mm at 1cm from the edge. I think this one might be especially thin, but maybe all the ones from DrNaka are this thin.
Weight: I can't give you an exact number, but it feels a good bit heavier than 170g (a 270mm laser gyuto would be around this number)

The knife is in good shape, but it's definitely been used. There are some slight dings (1mm or less) on some parts of the spine. Not a big deal at all, but I thought I'd say all I can think of. The saya is also in good shape, but has some water stains on it. The edge is in pretty good shape, but you'll want to touch it up.

The blade has a yellow-ish patina from cutting fresh turmeric (which is a HIGHLY staining root) as well as some other patina from general cutting. There are scratches on the surface, which no longer has the stock finish, because I had to refinish it with a rust eraser after I failed to evenly polish it with fingerstones. The grit of the rust eraser I used to finish it looked similar to stock, but the scratch pattern is not as well done and crisp as when Izuka san does it (duh). I can leave the patina on or remove it with the rust eraser, your choice.

If there's anything I left out, just ask me by PM. I have a good rep selling on a good number of razor sites, and I've sold a ton over on SRP and B&B.

I paid around 550USD for this knife and if it's the same price now (in Yen), it'd be 580USD with the saya. Mine is used but not very heavily and still has just as long a life left in it, so I'm asking 475USD shipped with insurance and tracking.

That's a really nice knife appearance and specs, alike! You sure you wanna sell it?

If it sells and I do really regret it, I'll pay up the extra and get a 270 Shig gyuto.

The lowest I'll go on this is 450 USD. That's almost 20% off what I paid for very little use on the knife (more than 20% off what you'd pay now if the prices haven't changed, since the dollar is weaker than it used to be).

I already have a 270mm Shige gyuto and yet I am still considering buying this. If I had the extra scratch at the moment I already would have. Someone should grab this. Tinh? If you do I will put my world famous* 20lb Bacon Patina on it for you. At the least...a bump for Heirkb.

I've got one guy who's interested on another forum, but he hasn't gotten back to me yet. We'll see...

What's this bacon patina? We could always use more pics of blue patina.

The guy on the other forum still hasn't responded, so this is still available for now.

Heirkb's an absolutely stand-up guy and top-notch person to deal with.

heirkb said:
What's this bacon patina? We could always use more pics of blue patina.
Click to expand...

When I first got my Shige, we had a lot of diced bacon on the menu. Brunoise the bacon when raw/cured, then render in a saute pan. That was the majority of what I cut with my Shige the first week or so. Here was the patina after day 1, very blue and stable, I have had very little corrosion issues with it since. 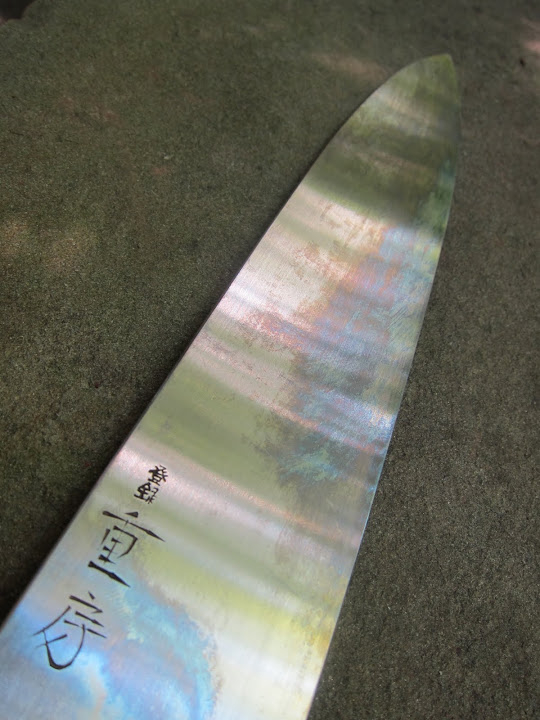 Wow, really nice patina. Especially the thumb patina. I don't eat a lot of meat, but I purposely tried to cut a lot of meat with mine. It's not as nice a blue as yours, though.

Just a note about reactivity, since I know lots of people worry about this for some reason. Below is what I wrote to someone else about it. Look for the bolded sentence if you want a summary; I know I can be a bit wordy at times. Can't help it. :rolleyes2:

I haven't found it to be all that reactive, especially since it has started to form a decent patina. I also rinse it with hot water like DrNaka suggested. I don't know if that helps or has contributed to the knife's fairly low reactivity. Regardless, the knife's been fine on the reactivity front. If I cut for a good amount of time without wiping it at all, the knife will smell a little if I stick my nose up to it. It hasn't flavored my food for a good while, though. Only once a while back after I refinished the surface with a rust eraser did it transfer some metallic taste to some onions. I usually only cut vegetables with it, though, so maybe if you cut mangoes and let the knife sit there a bit, it may transfer some taste, since mangoes are very intense on knives. I don't have any other carbon knives to compare to, but the cladding on my Heiji semi-stainless actually rusts much more quickly than the Shig cladding.

...I just think that reactivity shouldn't be one of the things holding people back on this knife. Maybe price would be a better one, if they can't afford them, or size if they prefer smaller/bigger than 240mm knives.
Click to expand...

Thanks. It was almost completely blue after a week of cutting bacon everyday. Now it has evened out and is mostly gray, you have to turn it to see flashes of blue.

I agree with the reactivity. I haven't had a problem with mine. I keep mine in a hotel pan under the line at work. One day at the end of my shift I pulled out the pan and saw water droplets on the blade, don't know how long they had been there, but it was at least an hour or more. Wiped off fine, no corrosion. After you have a solid patina, they are really not a problem at all. No worse than anything else. The problem you run into is if they don't have a patina, even a finger print will rust. I have cleaned mine with Flitz and even that leaves enough patina to prevent it from being super reactive.
P

I'm gonna bump this one up again. Somebody's gotta want a 240 Shig, right?

You have no idea how many times I've almost pressed that PM button! great price and an awesome knife!

I just sent an offer to someone who PM'ed me, but PM me about it if you're really interested. I may have a tiny bit more wiggle room on the price if that helps.
T

Dang... I wouldn't drop the price. I'd keep it instead.

I wish i had the funds...I would love to add a Shig to my collection.

I was close to it at this point. I only ended up going down a tiny bit more, which I didn't like doing, but I'll live. I can't really justify having two 240 gyutos around if that's not even the size I want. All I really want for what I cook is an 80mm paring, 210 (semi)stainless gyuto or petty, and a 270 gyuto. I don't really need or want much else, so that's why this knife was up for sale. Wait...I do want all three of the main single bevel styles, but that's far off in the future.