So a quick review of knife after having it for nearly a month. 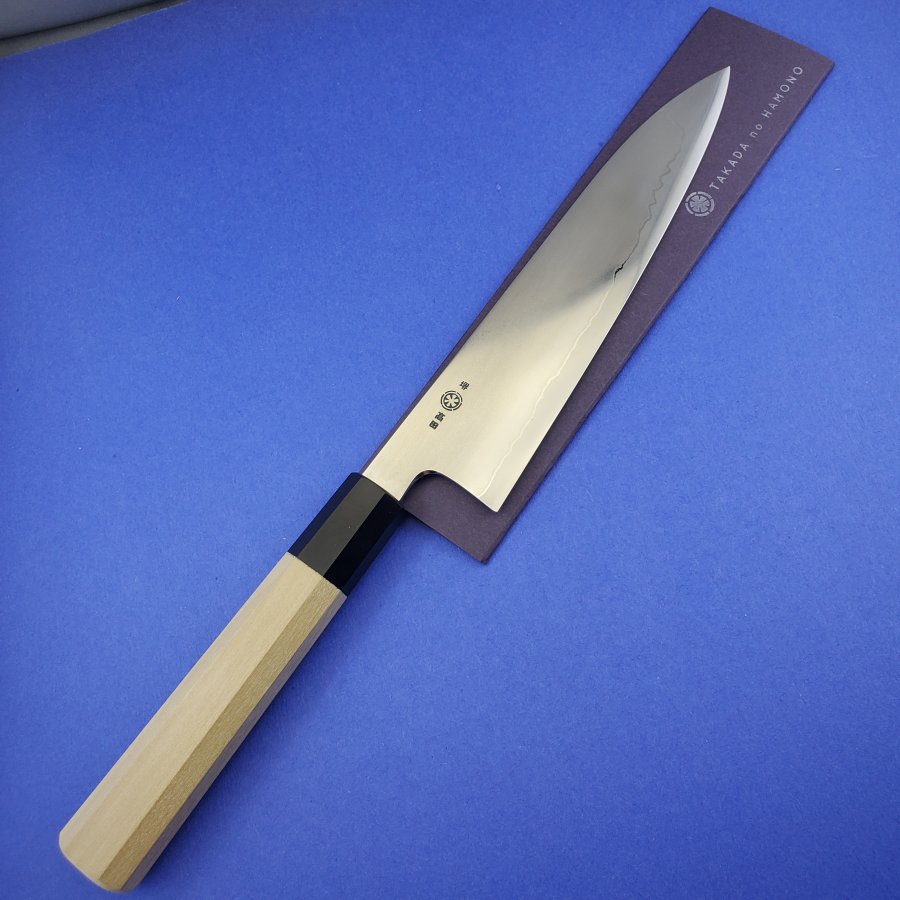 It's a beautiful knife. While the suikboku doesn't show up as much as on carbon steel, it gives a hard to describe cloudiness on the cladding. It is also fairly resistant to scratches which is something I've found to be an issue with stainless cladding. The rest of the knife tends to come like a cloudy mirror making it hard to get a good picture.

Profile is excellent - same as my Kono MM which is along exactly what I like. Just enough flat for good push cutting and enough curve if you want rock with it. For the lasers I've had (Kono FM W#2 and Kono HD), it has a great grind. Takada has managed to get some great convex into a knife as thin as this. This knife has handled cutting duties with aplomb. Only thing I might ask for is a bit thinner tip, but that is splitting hairs as they might say.

This is my first ginsan knife and the steel seems to be delivering so far. The edge was sharp (as expected) and has not required a touch up so far. I do have to say it is "stain-less" as opposed to "stainless" as I've managed to patina it (by leaving it with a tomato sauce on it for a few hours as I forgot to wash it)

Nit pick is that the handle is a bit poor quality for a knife of this price. I find it a perfect size and the ho wood balances the blade perfectly. The problem is that the top and bottom of the octagon are not parallel. I'd originally thought the handle wasn't installed properly but it turns out it's a bad shape of the handle. In this pic you can see the bottom (at the top in the pic), is not parallel to the top.

As another thing, which I forgot to take a picture of but you can see in Tosho's pics, is that near the tip on the right side is that more core is exposed than on the left side. I suspect that this is due to the forging rather than the grind, but it could be considered a small flaw to the ultra-picky.

So far my opinion is that this is a great laser - thin, decent food release while still having a solid feel that you don't need to worry about chipping as the edge has enough meat.