The “What… wait… what?!” Review: Makoto Kurosaki SG2 Bunka

SG2 in itself is not bad... Echizen knives can be great... Yet it doesn’t change a single thing to the fact that, in general, I personally despise both.

I don’t have a negative experience of them. SG2 was okay from Sukenari, and the couple knives I tried from Echizen were okay as well. I liked Takamura a lot, Ryusen unquestionably puts out great knives, Shigeki Tanaka was learned in the Takefu Village and I’m real fond of what he does. Nowadays he operates back in his family shop in Miki and I consider his flow to be rather independent of Echizen, yet not radically different and he does use SG2 – and VG-10 – prominently too.

It sorts of goes hand in hand, you know… generally despising SG2 (and VG-10) and Echizen that is. Over there it’s like 75% of knives are either steels. But I think for me it bottoms out with all of the bling bling made by the “young wave” around these nowadays mundane steels… or some of these young makers having a few different lines of the latter. So from overabundance and “tape-à-l’oeil” redundancy they inevitably have me rolling eyes. You could say I’ve grown visually allergic to them. 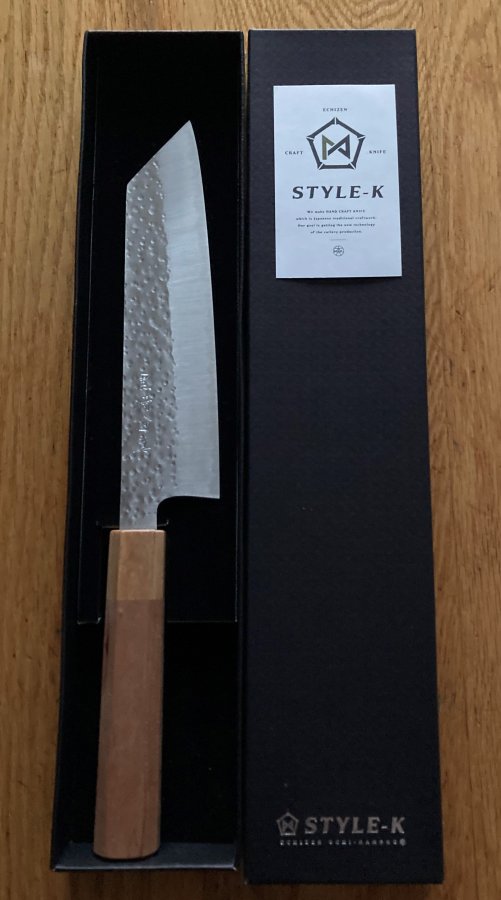 It’s fitting that I’ve not been particularly drawn to their profiles and geometries either. Making abstraction of the above ranting, they’re just not my jive for “tools” so it’s easy to ignore them… but one. I think Sharp Knife Shop have restocked this M. Kurosaki Bunka three or four times since I shop there – that’d be roughly 2 years and a total of four-five occurrences. If I’ve not looked into and carted it each time they had it, I never once did. 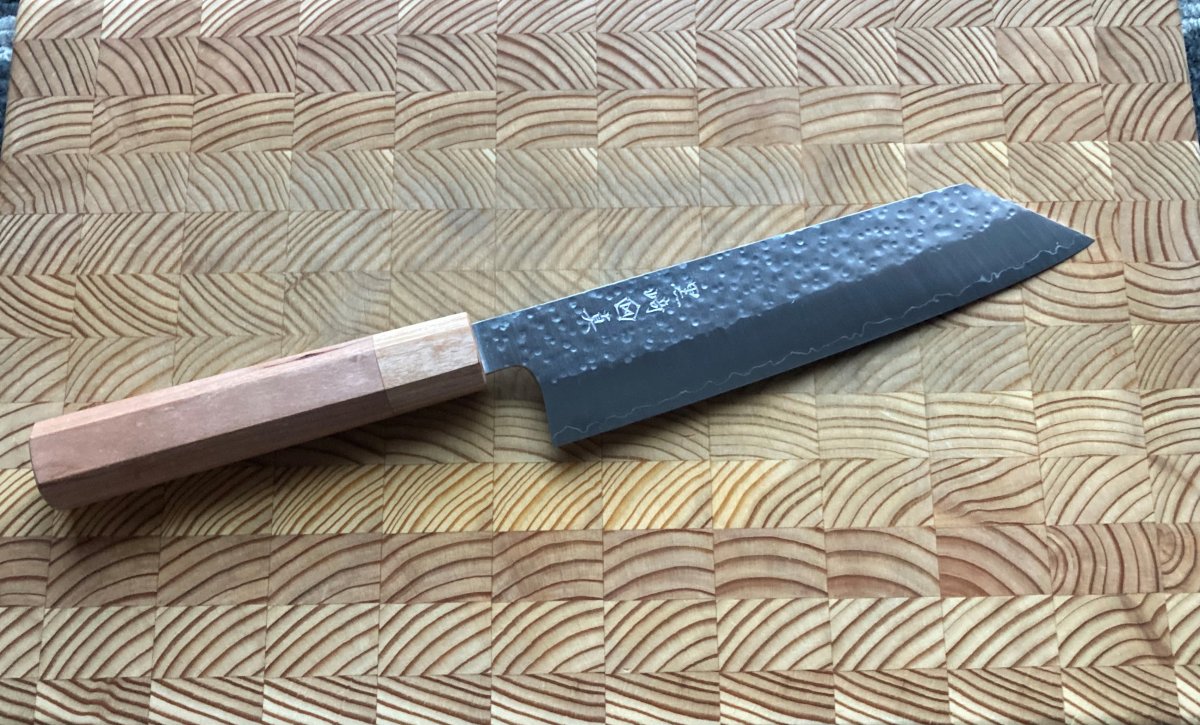 Yet… SG2… thin wide bevel geometry not a place I’m readily willing to go … one of the cheaper looking bling bling finishes that spell “Echizen made”… Even the handle I wasn’t so sure about: looked almost as cheaply disgusting as Mazaki Ho and Walnut… Really, no surprise I convinced myself out of it every time. 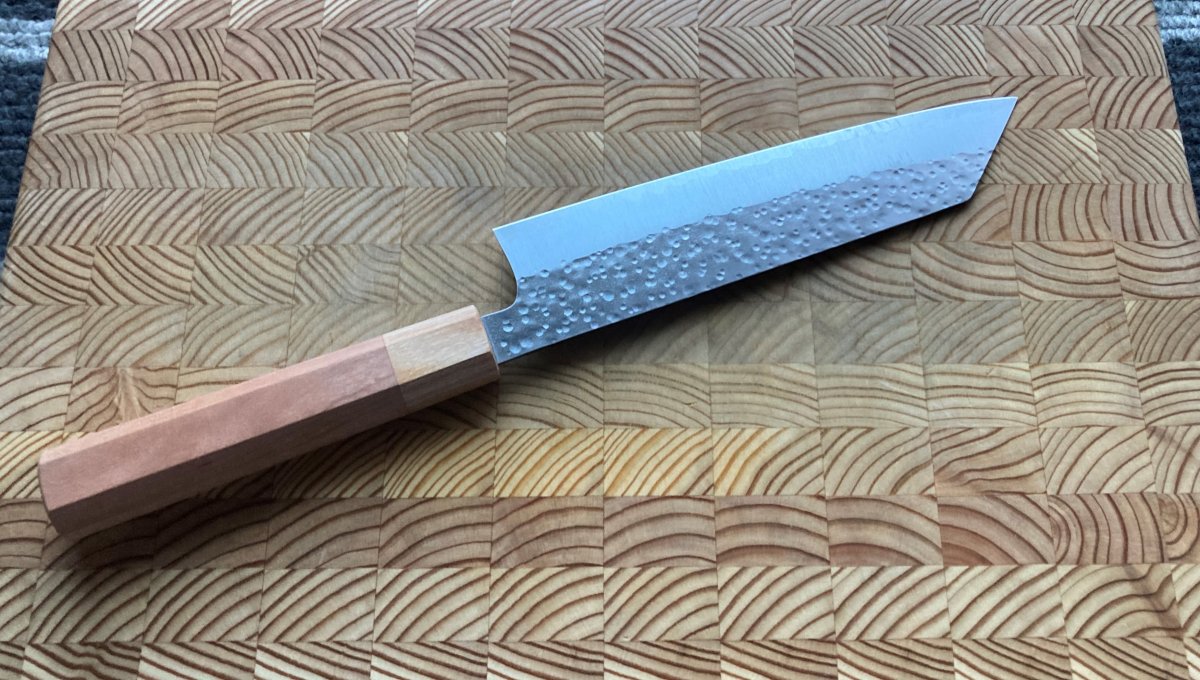 Its true appeal: shape and profile – at that a strong one for me. I also dabbed with tall Bunkas and like them but I think I ultimately prefer a Nakiri at being tall. For a Bunka, and through various experiences, this M. Kurosaki was easily the one drawing me in the most. Only problem: could I stomach everything that made me rather frisky at the idea in the first place, or would it just be like a “Meh & BST” situation? I mean when you purchase a knife, you’re not supposed to roll eyes at it OOTB, are you? 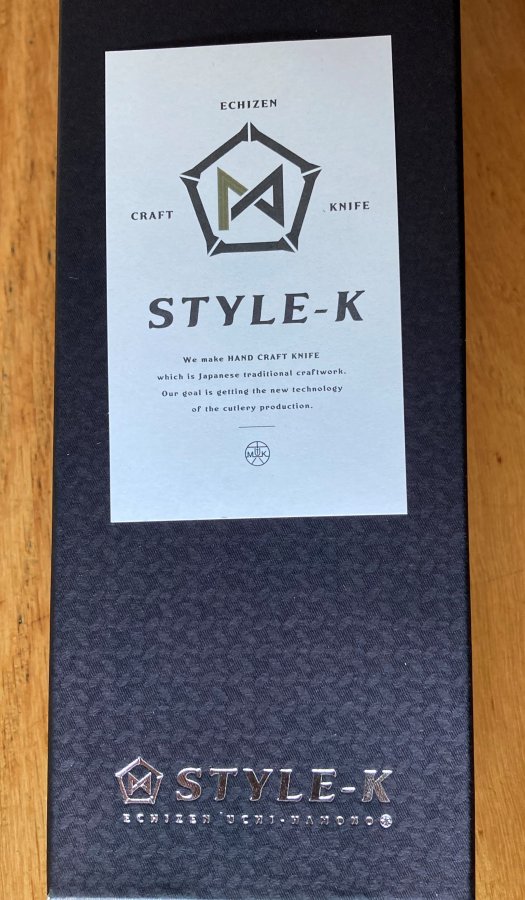 “Style-K” branding, English greeting card and subtle crisscross patterned black box… are a bit surprising. On one critical hand, if say Zwilling/Miyabi decided to send their knives in the “traditional” J-boxes, it would probably look something similarly “patently westernized”. Betraying fully Japanese belongings here would be the clumsy engine-translated note on the card. The black felt liner with a ferrule cutout is as nice as these things come. Not pictured but dutifully present was a VCI fold protecting the blade. 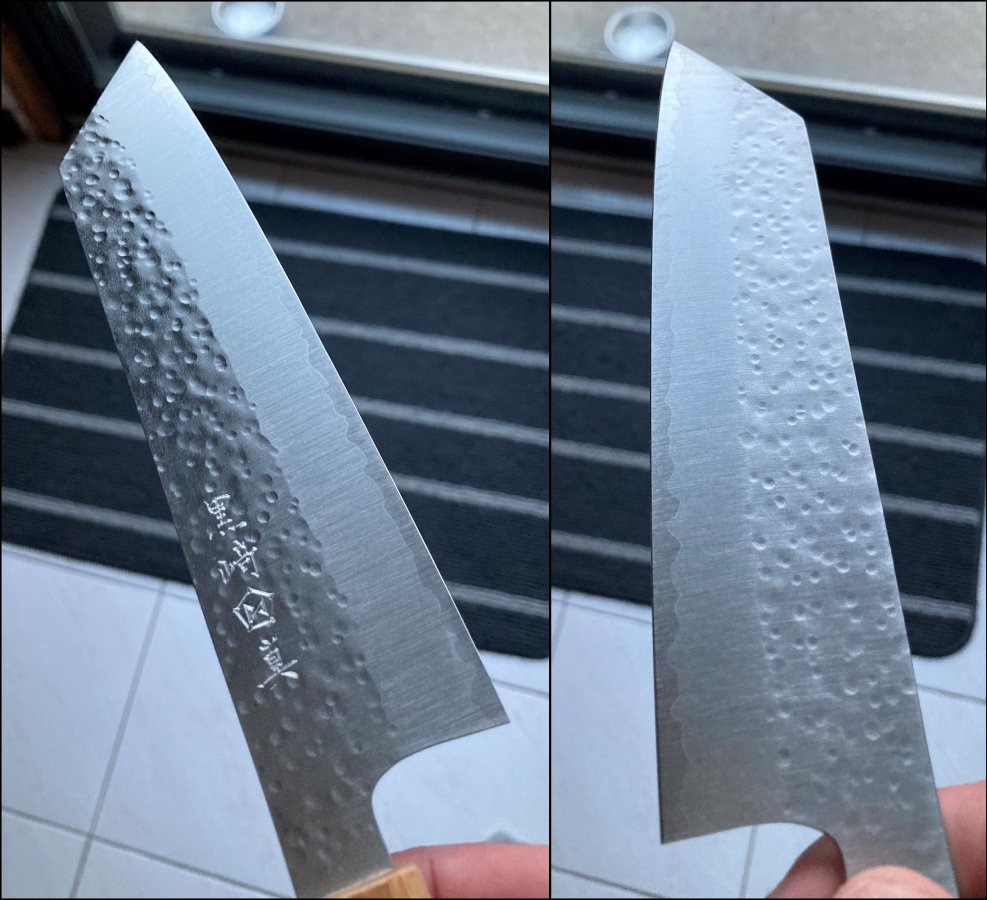 Tsuchime finish is pretty insipid, avoiding there the “in your face” bling bling factor (albeit bling bling is often times insipid in spirit) and I think its worst attribute is how consistently artificial and ugly it comes off especially in pictures. First person however it’s mostly blending in, shiny and forgettable enough. Force is to admit though, despite not being catastrophic, that it’s probably the most aggravating attempt at looking nice I ever encountered first hand. Seems the same than some of Takeshi Saji… perhaps the latter uses the Style-K branding as well? 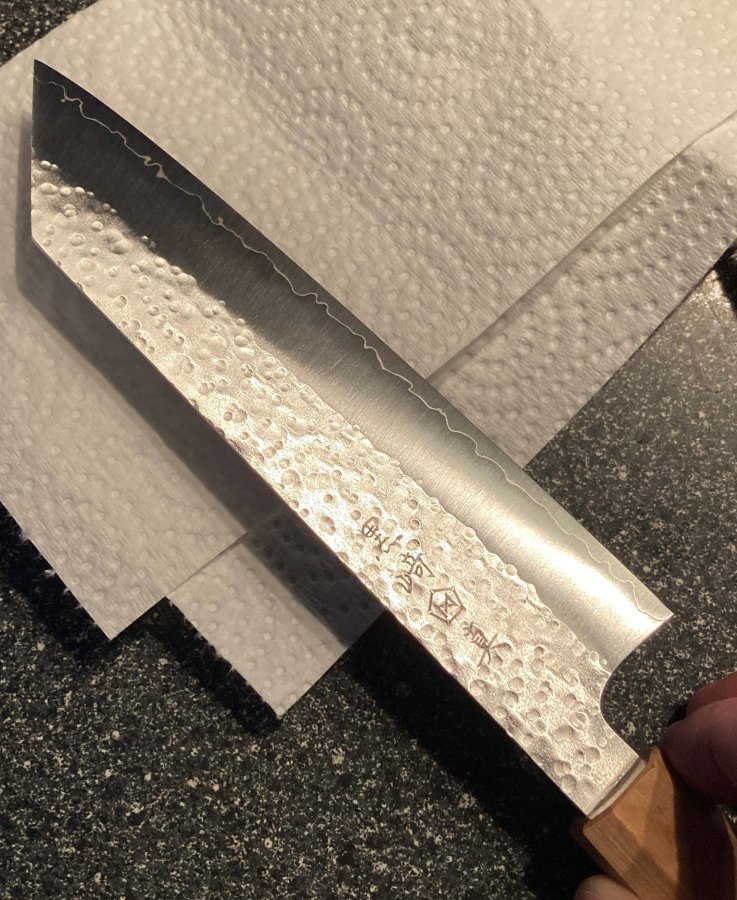 I get it now… it’s random paper towel pattern Tsuchime.

The American cherry handle has natural pinkish hues which aren’t always so pleasing, giving either lavish or blushing impressions depending on light. As it comes OOTB though it’s rather plushy and sickly pale, so it does need work anyhow, and I could already imagine it giving darker halfway reddish brown and rosegold hue, and the blonde pakka coming out more naturally shaded and patterned. Here I’ve tried to capture it under its most “natural” color. 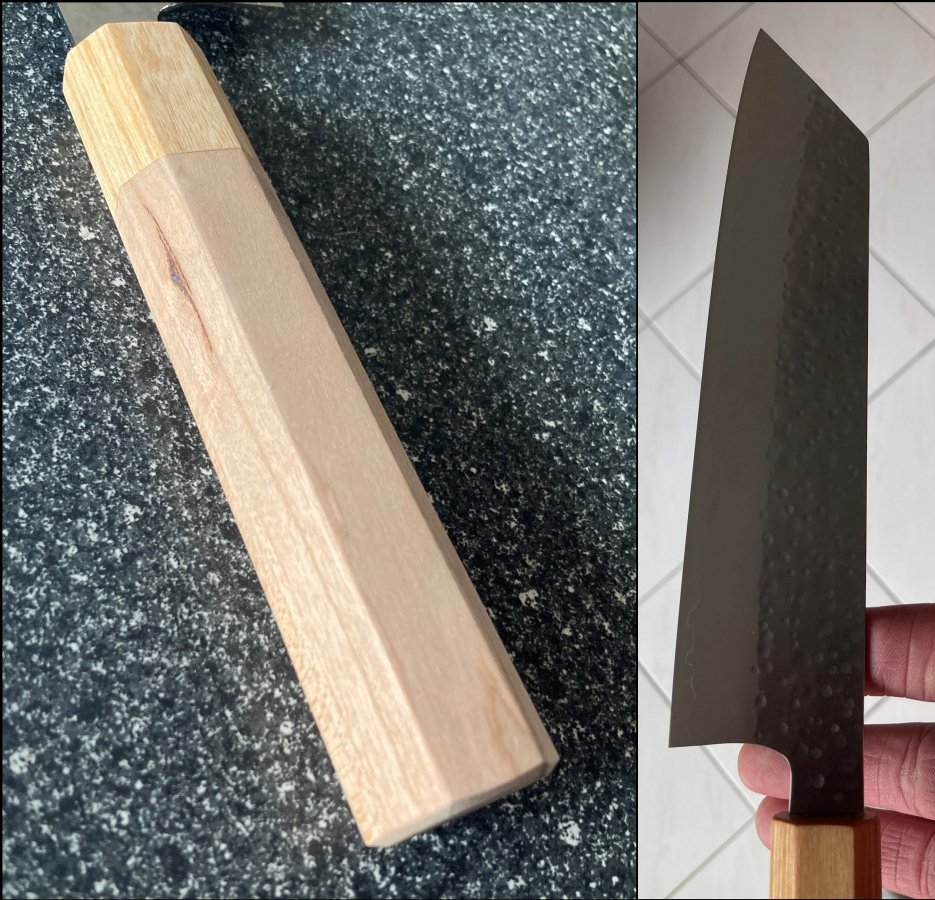 Otherwise it is a well sculpted unit with a nice if discrete grain pattern, balancing the blade quite forward as shown above and further discussed in part 3.

I guess it’s already addressed some above, the cosmetic aspects at least, but I tend to separate F&F from cosmetics because the latter is a personal affair, while F&F can be more formally discussed, so let’s add the usual tentative shot at capturing spine and choil work at once… 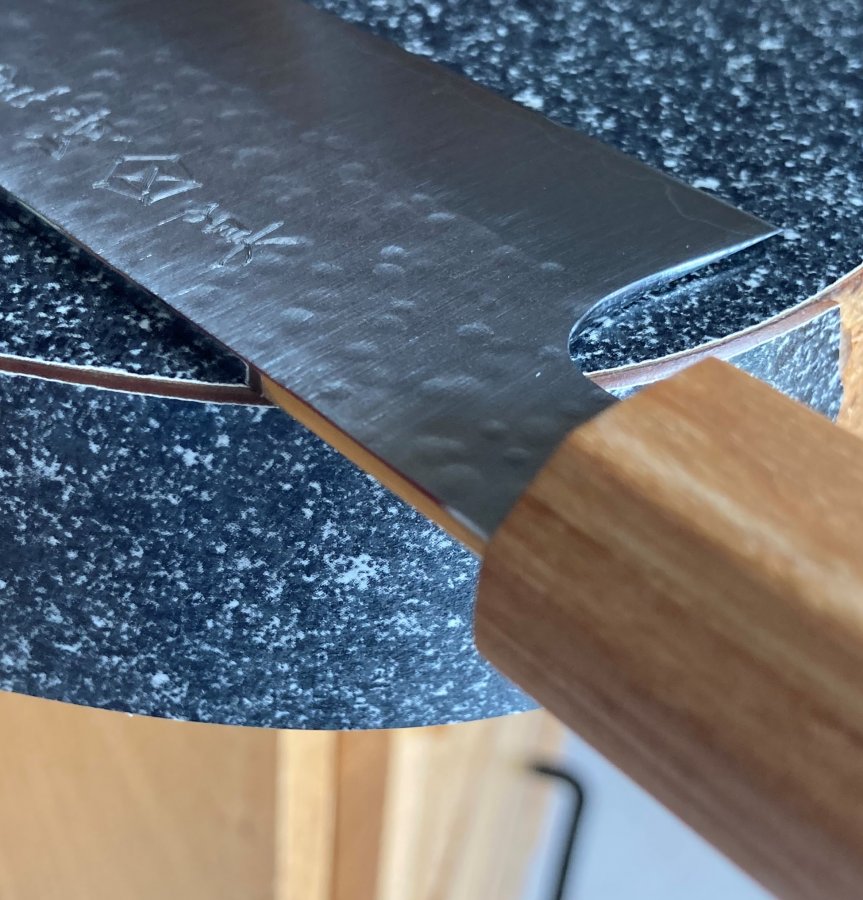 … and while it’s just about sufficient it’s nothing extraordinary. No roughness or sharpness left behind much to the touch which is almighty fine by me, but visually it looks like how it’s done. Otherwise the ferrule is fitted nicely with the handle, the handle fitted straight with the blade showing no glue/epoxy overflow. The insert is wide enough though that you can actually easily see a thick layer of the bonding agent. These are obviously no tailored made handles but I find the size quite aptly appropriated.

Let’s start with the profile first since it’s indeed what got me here with this knife:

For those dead set on a real flat spot, this is a no go. I personally find it efficient with various cutting motions without ever getting any accordion cuts. The flat adapts pretty well to the gradual belly and slight slanting of the blade, getting easily twice as wide not so far from where it stands in the picture. 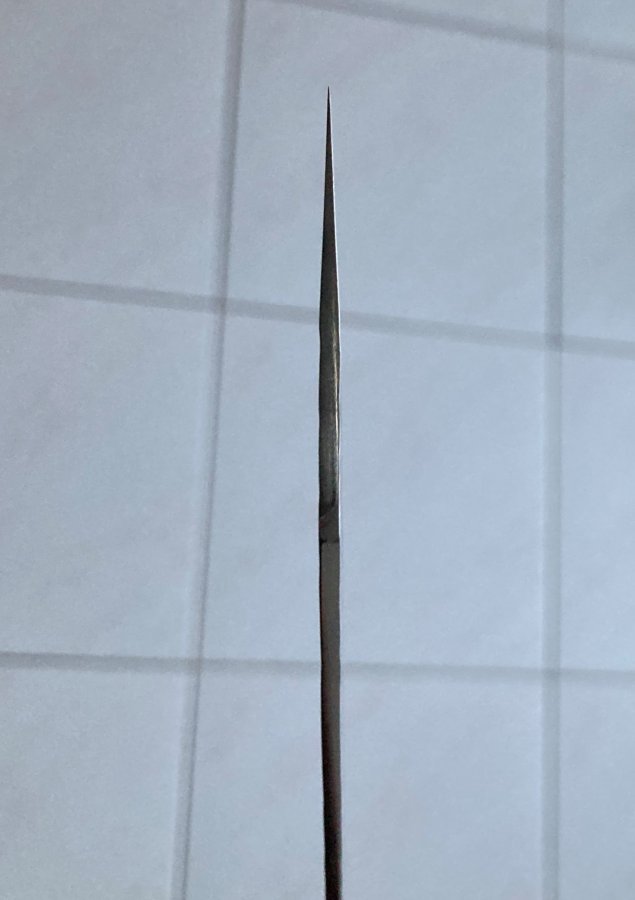 One thing Makoto Kurosaki got right is to have that tip area pretty thin. Since the knife is balanced rather forward for such a short and light blade, which suits it rather well adding some extra versatility to its absolute nimbleness, the laser tip tops it all nicely making for thrilling efficiency in preps. It’s really the dream Bunka-utility knife to me. 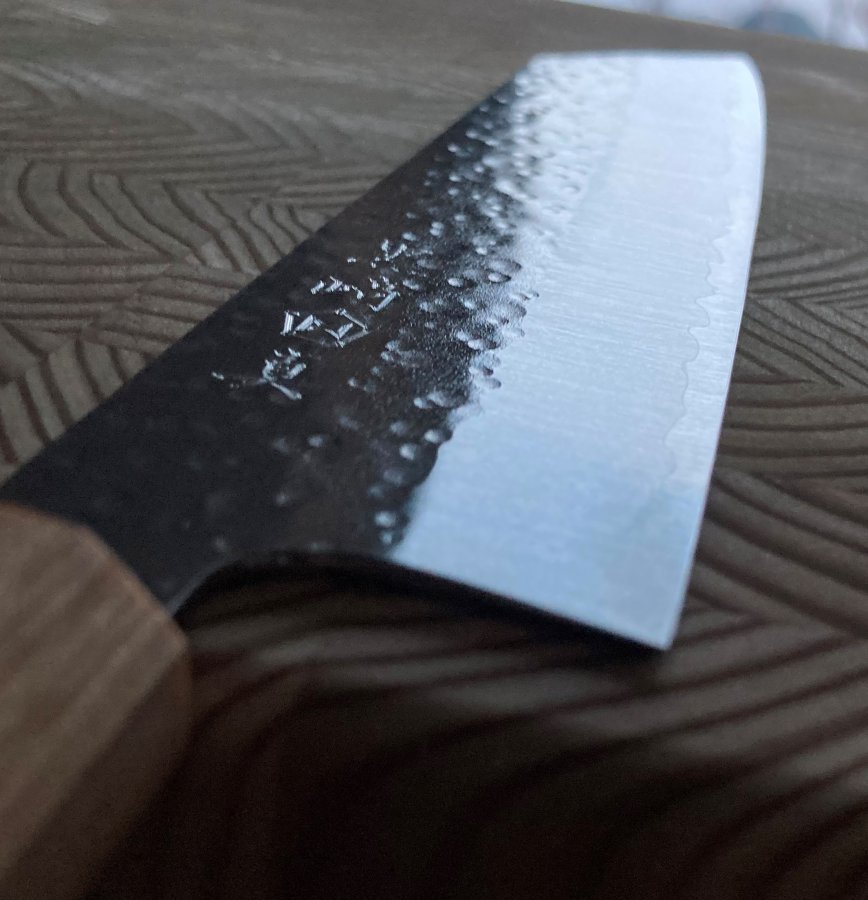 On the positive side as well, the grind seems to be carried really well and I couldn’t find the slightest fault to catch my eyes or the tinniest indication of possible thicker spots or overgrinds. Sadly, from there on things are not as kosher as I would have liked them to be. 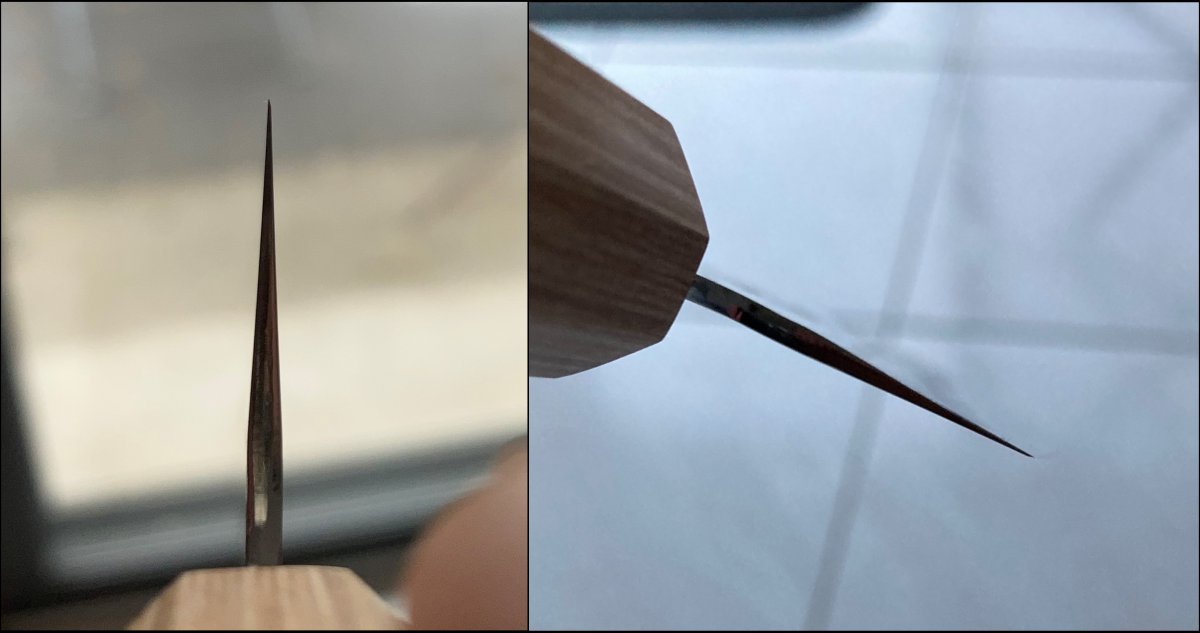 Looking at that choil shot, if you remark that it’s not so thin BTE, you’re quite correct. However with this kind of steel, I figure it’s a good compromise to avoid brittleness and I’ve not found separation to suffer much from it overall. The problem here is rather that, while overall geometry from the choil would tend to betray obvious righties favoring (nothing uncommon), the edge was weirdly sharpened like 70/30 favoring lefties. 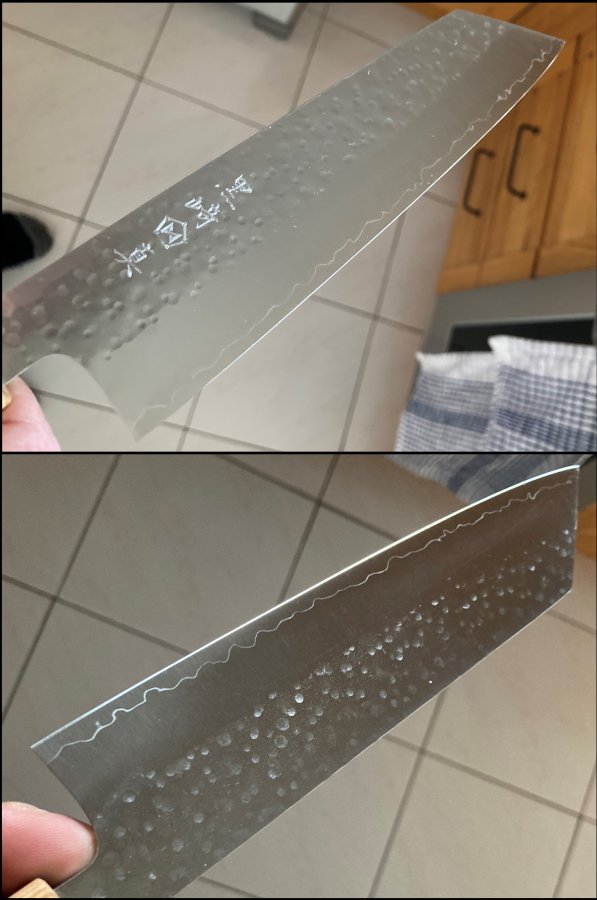 Of course as we all know, OOTB edges aren’t made to last forever, especially this one: poor enough that it would even be difficult to assess any undesirable behavior the conflicting asymmetries generated if any. Since I had to sharpen it from the onset, I went to at least regularize the edge to about symmetrical. It started cutting exceedingly well then and I couldn’t find any trace of anything weird. Still, it’s almost the worst aggravating aspect of this knife OOTB, but at least THIS can be fixed whereas the Tsuchime is there to stay… Seriously though, I’ll still have additional work killing that inclination here when I’ll get to thin it: my initial sharpening/leveling barely camouflages it some.

As for performance – as considered after sharpening – I have to say that separation and release are rather nice with it, however both can be hindered by the very same effect which is some tendency of the very flat beveling to stiction. When it hits, coupled with relative crispiness of the Shinogi in some cases as well, you can get things like wedging slightly in bigger onions, or a few carrot planks sticking to the blade excessively stubbornly, or whatever else of the sort. But it’s minor quibbling really: even cumulating worst case scenario of food vs motion it mostly manages real well once sharp enough. It’s probably saved there mostly by what also refrains it having more laser-like abilities: the rather thick BTE.
Last edited: May 2, 2022

Afterword: don’t expect happiness OOTB. It’s but just generally presenting a rather nice side. Don’t expect purely awesome cutting behavior. It’s but just quite good how it comes – if of any decent sharpness. If ready for some work and if the shape really calls to you though, I still think it has strong qualities that, provided righteous instinct, might combine natural and intrinsic performance enough that you’ll be charmed with it.

FWIW – and depending on your tastes my appreciation is still mostly liable not to be worth much – I really like this M. Kurosaki’s Bunka… even where in my old scoring system this fellow here would barely make it a 3/5 even hitting rather of a soft spot with me. In my rotation and use however I must admit it secured a pretty earnest place. It’s become a tool I jive with indeed.

Now a look at some of the rather emergency work needed with it, or at least a clear sign of me liking it: 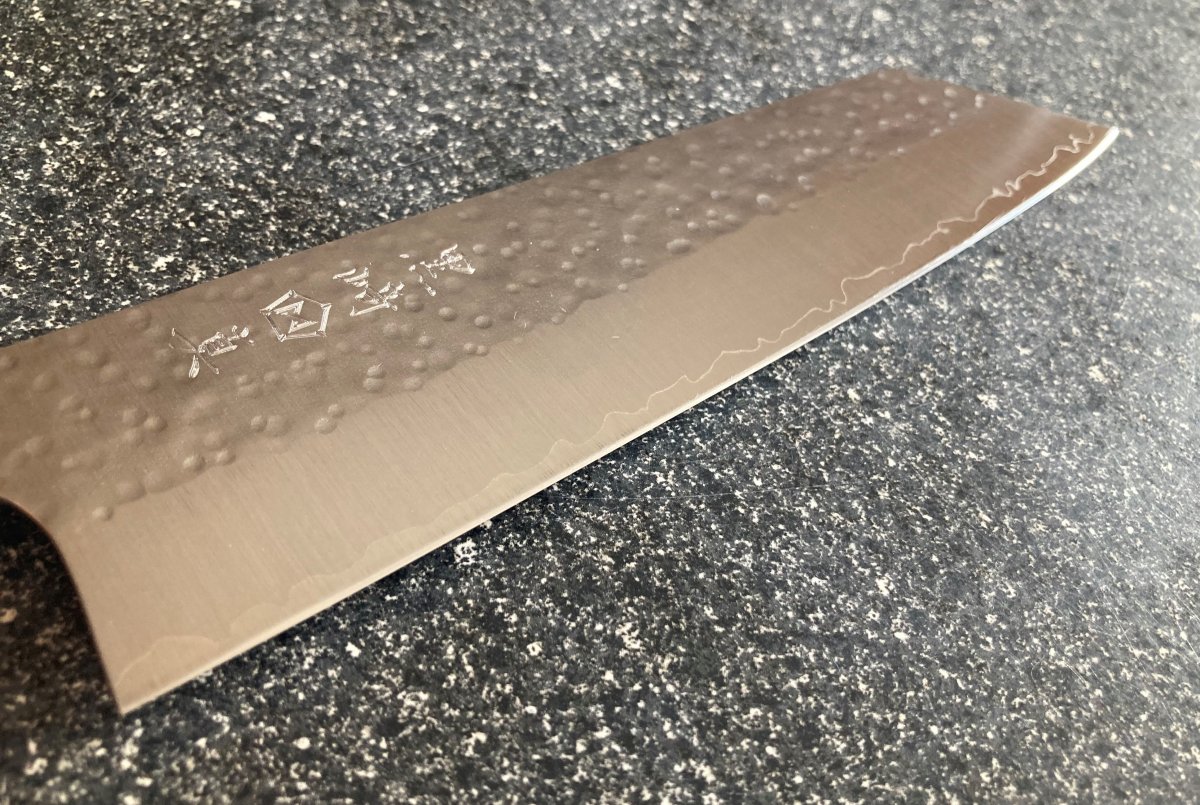 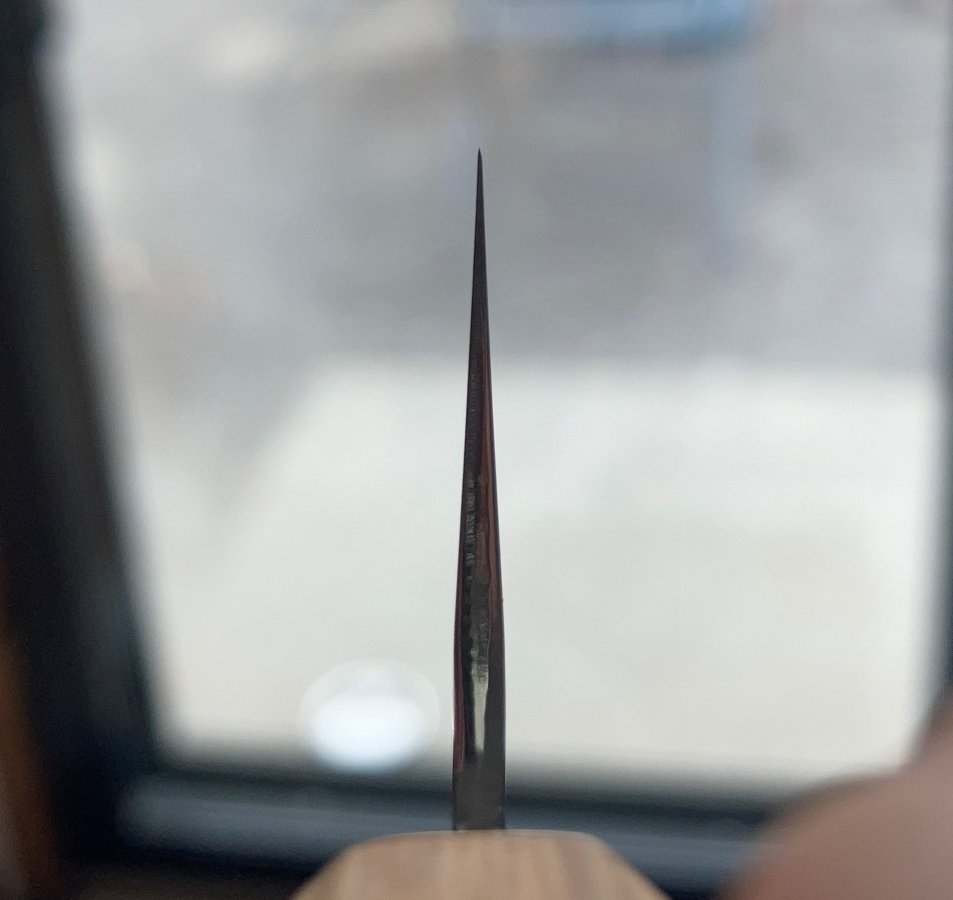 As already pointed out, it's not like it's gone or close to be. 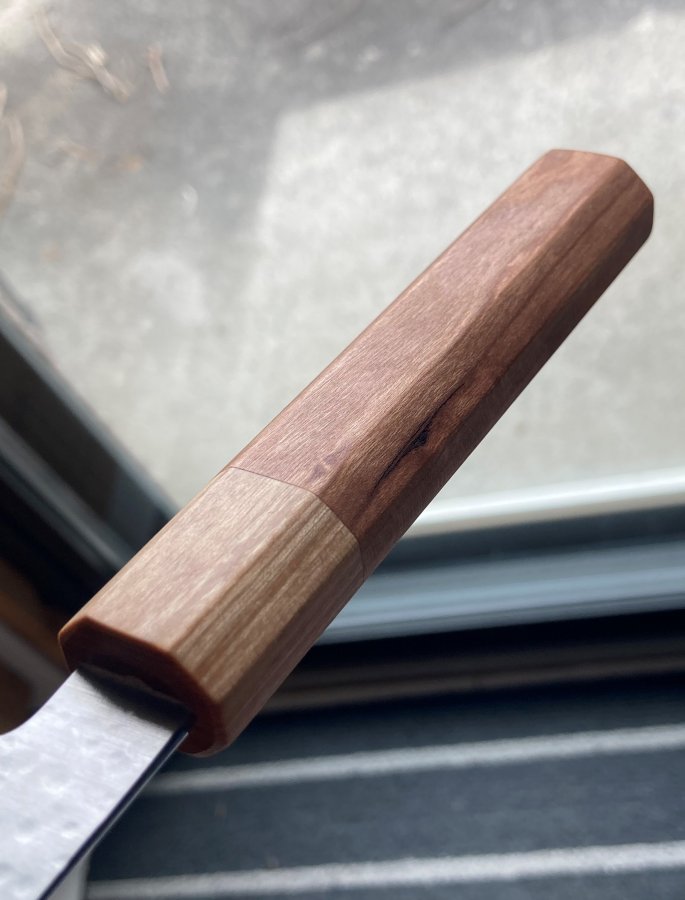 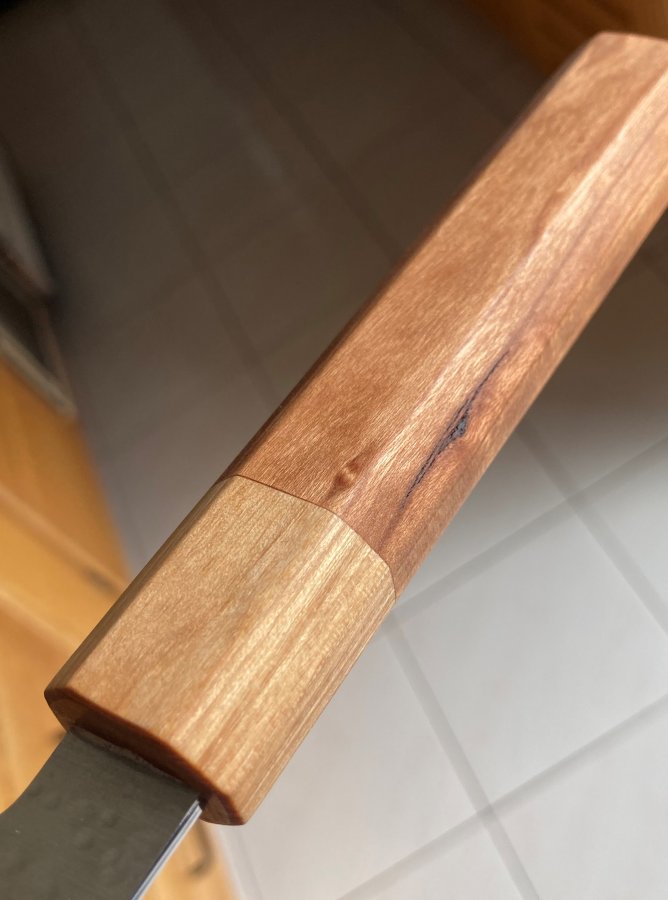 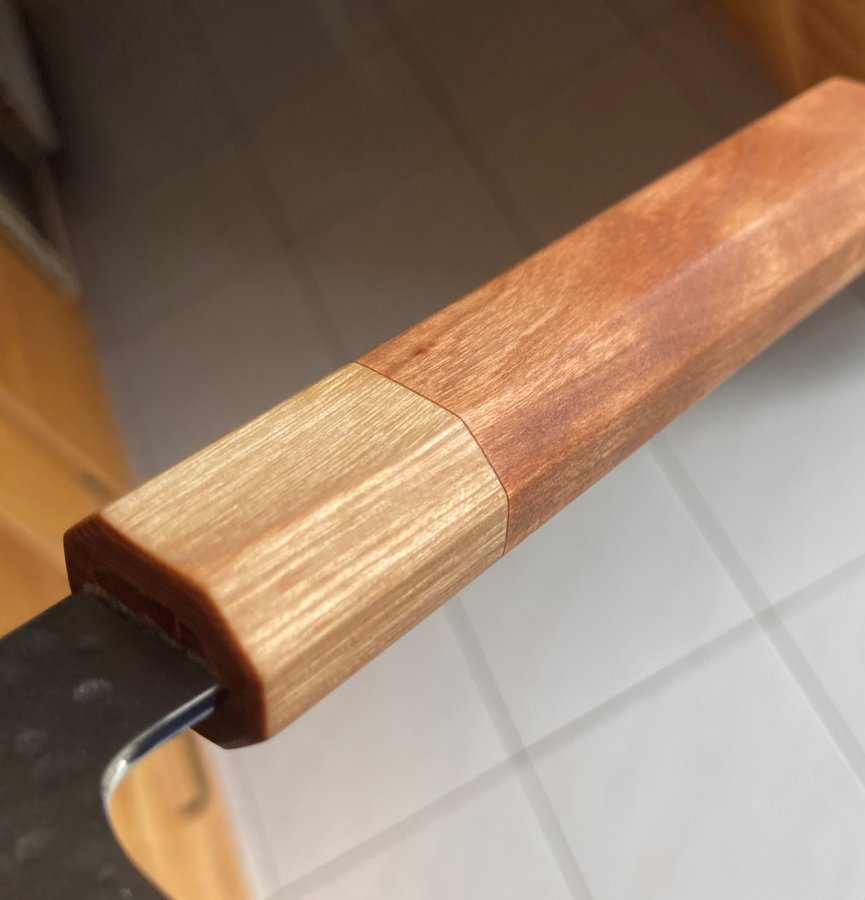 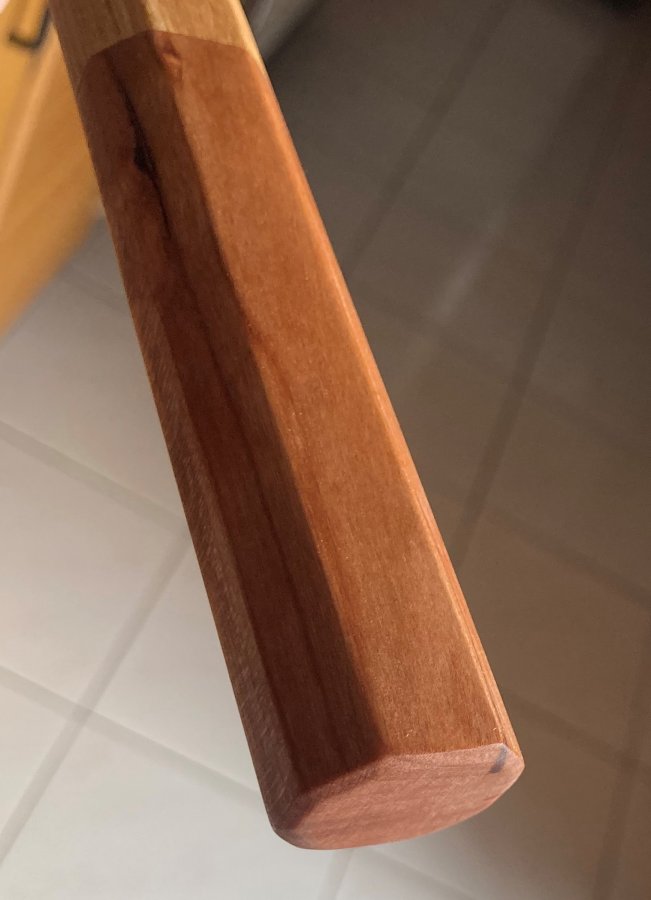 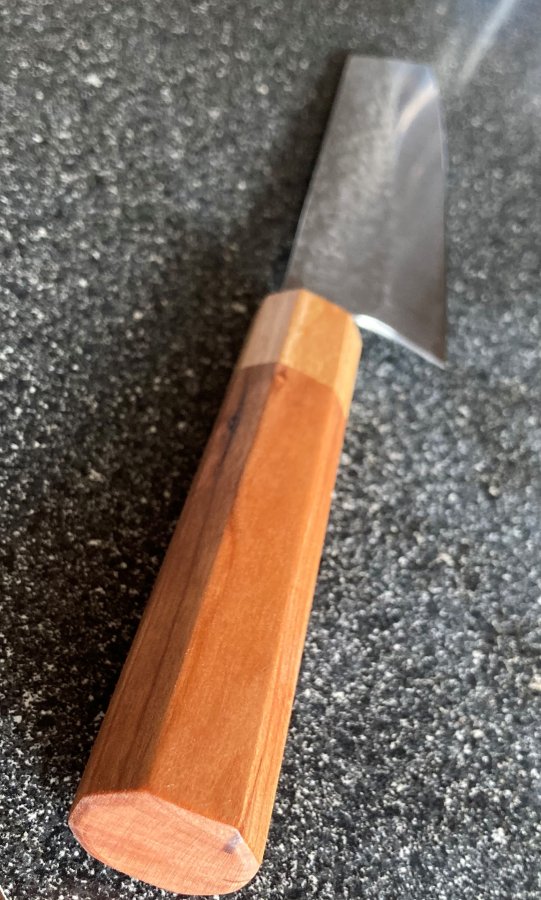 I got a Ryusei (VG7) Gyuto. No tsuchime, migaki finish with a hint of kasumi on the bevel. I personally like the very clean look and I truly believe that the cherry + red pakka handle fits very well. I have many knives with that kind of looking handles, pale wood and redish wood ferrule.

The performance is what makes me truly love the knife though. Like yours, there is a light curvature on the cutting edge and I found the same results as you. It favors different cutting techniques (which Is what fits me best) without accordion cuts.

I also like how EASY and fast is to sharpen it, yet the edge lasts a good amount of time, 4-6 passes on my Shun 1000 stone on each side, a deburr, strop and it kills. Less than 5 mins work.

I still don't understand why so many people s#it on VG7. It is a very rightful steal IMO, at least in this knife.

I own many other knives, many of them "higher end". Yet my Ryusei is my favorite of the bunch. It is both, my main prep knife and my line knife.


Thank you for your honest review and I'm glad that you found a tool that jives with you. That is always the best part.