Well I decided to take the jump to hobbyist and so I'd like to start with a little about me and then we'll get straight on to the knives. I work mainly as an artist in the north east of England. I do a lot of work with movie prop replicas for collectors and costumers, very occasionally for small independent movie projects as well. I do also do more traditional artist stuff like oil paintings but I'm finding I have less and less time for that.

I love to drive, I started racing karts when I was 10 and kept going into cars into my early 20s until the reality of paying for racing started to bite a little too hard. I play guitar and violin, I'm married to a vegetarian and so we mainly cook veggie food (I'm the designated food chopper), and I like to relax with a glass of whisky, another little hobby. Less expensive than knives, but barely.

Anyway, on to the sharp things. I've been making knives for about 5 years now, just a few a year until now,. often for friends but also as commissions and sometimes just for fun, and they sell when they sell! I'll stick with showing off the kitchen knives, though I do make various outdoor ones too.

Do please ask questions, send messages, whatever, obviously I love to talk knives and anything else that I enjoy!

This is an early one, steel from Delbert Ealy, ordered by a friend.

Another one for a friend, this was for her 30th birthday. Apparently I've ruined her for knives, as now she expects them to be sharp.

This was a custom order. The steel is from Devin Thomas, and went to a chef who asked for something similar to his Kramer, but with some changes to the profile. I feel it almost ended up as a cross between a Kramer and a more Japanese profile. He liked it though!

Another one for a friend. He tried one of mine and liked the gyuto shape. Another person converted to actual sharp knives, his wife told me that the first few meals cooked were accompanied by giggling while things were being chopped and diced.

These last two are the most recent this first one was done just because I wanted to use some feather pattern. Turned out quite nice, definitely a favourite pattern.

And this one was kind of a mistake. I ordered some Fireball pattern Damascus from VegasForge for myself. Well, I got it, got it mostly done and went for a test etch...oops, it's raindrop pattern. I have to say the guys at VegasForge were great and sent me some fireball at a great price to make up for the mistake. I finished it up and I'm kind of a convert to the raindrop pattern.

Hello Paul. It is awesome to have another knife maker on KKF. Your work is very nice! Are you on IG or maybe have an FB group?

You also have a really wide spectrum of interests.

I am looking forward to see more of your work
C

Thank you both! Matus, you can find me on IG and FB @thorntonblades.

Beau Nidle said:
Thank you both! Matus, you can find me on IG and FB @thorntonblades.
Click to expand...

BTW - as a Hobbyist Craftsman you can put links yo your social media in your signature should you prefer to do so.
D

Welcome to the forums. Those are really nice blades. Do you have any taper and choil shots you could share? Not for all of them, just as a sample.

DisconnectedAG said:
Welcome to the forums. Those are really nice blades. Do you have any taper and choil shots you could share? Not for all of them, just as a sample.
Click to expand...

I only have two of those knives in hand right now, but here’s a couple of those shots. I was using my phone for them so hopefully they look ok on something bigger than a phone screen. These are both workhorse grinds. 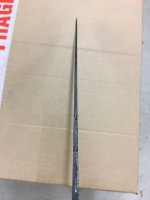 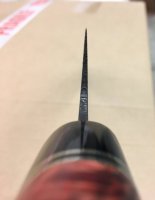 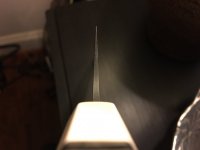 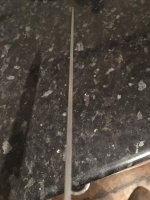 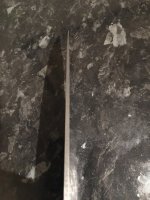 Thanks thirstyOne, I'd be happy to give him a knife so he can do the honourable thing...

Anyway, I tried a quick vid, this knife is up for sale in the hobbyist sales forum. I can't seem to get it to embed in the post so you'll have to actually click the link, sorry...

While you’re at it make one for Nigel Farrage as well please...

Had some new handle material delivered today. Both way too pretty for outdoor knives, I'll have to make some more kitchen knives for them. And I can probably get two handles out of that darker block. 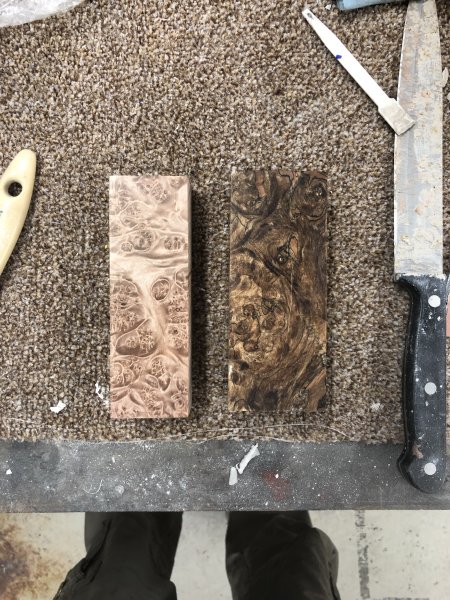 Hi Paul, where in the North-East?! I am a maker in Newcastle, thought I was the only one!

ForeverLearning said:
Hi Paul, where in the North-East?! I am a maker in Newcastle, thought I was the only one!
Click to expand...

Just across the river mate, got a workshop in Gateshead. Small world!

Couple more in the works. I have some petty's and a nakiri profiled out as well, just haven't done any grinding on them yet! 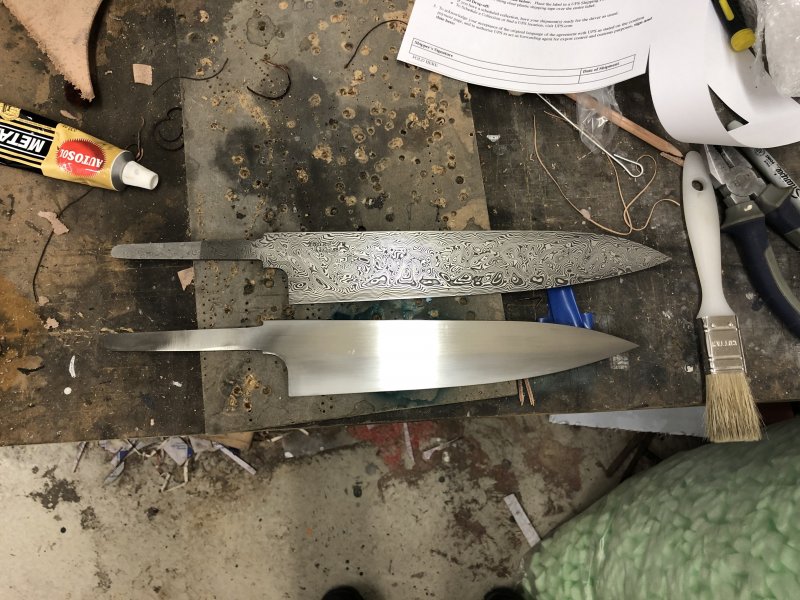 I know this isn't a kitchen knife but I thought I'd share it anyway. 9.5" bowie (15.5" overall). 400 layer san mai damascus with fitting of more damascus and silver. 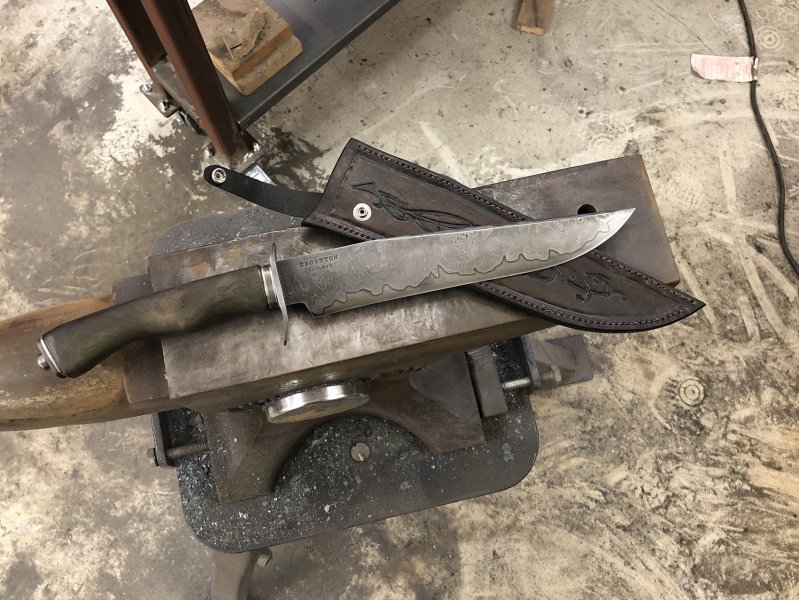 Gorgeous knife and sheath as well! What's the handle material?

Thanks man! The handle is stabilised poplar burl, dyed green.

Also made this leather sheath over the weekend. I know most folks probably prefer wood, but this might be a cheaper option for people needing knife protection. Would there be any interest in this? 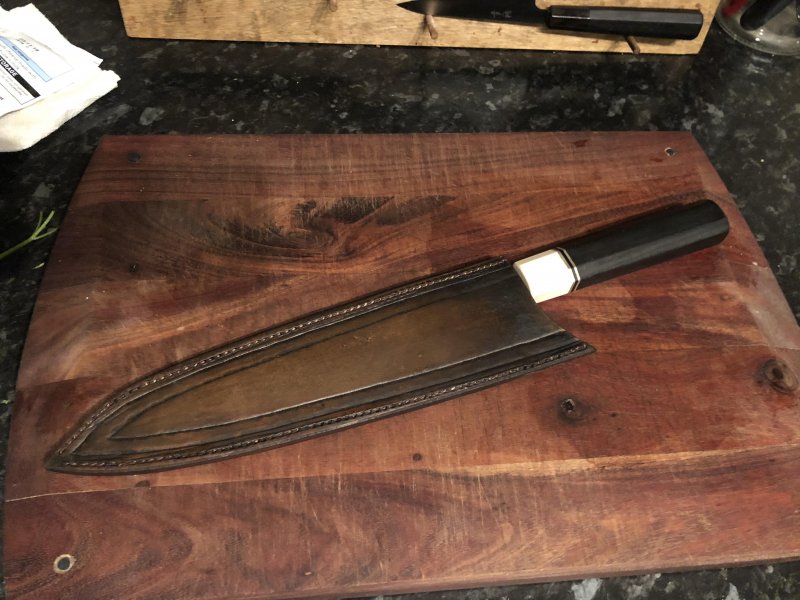 I definitely think so, I'm dangerously close to buying some leather crafting tools myself. What weight did you use, 6-7?

I know I speak only for myself when I say absolutely everyone here wants to see that thing cut and onion and a potato.

This is what I wanted when I ordered the damascus from vegasforge last time. This one is staying with me! Maple burl, african blackwood, with silver and carbonfibre spacers. 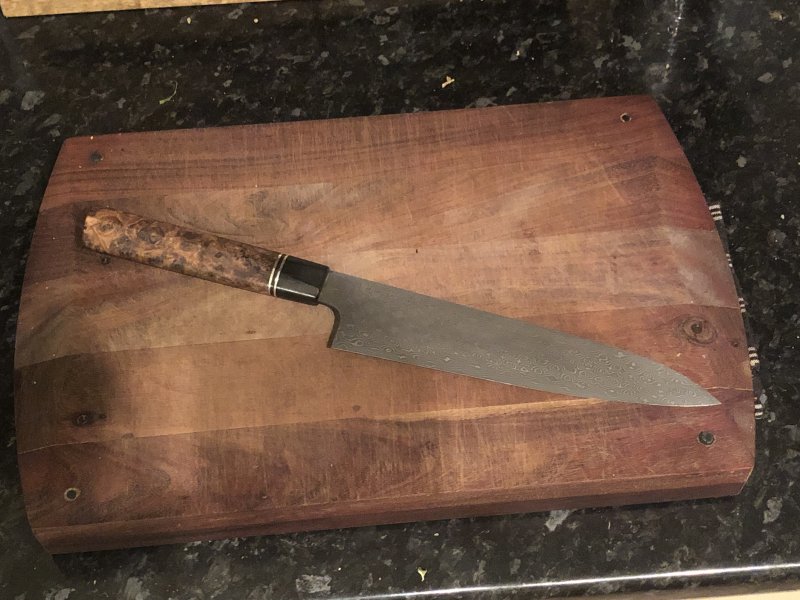 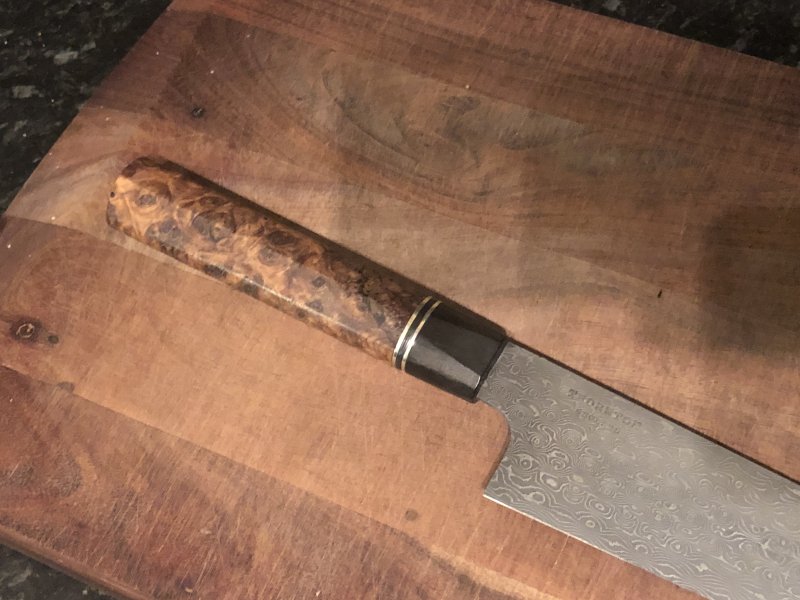 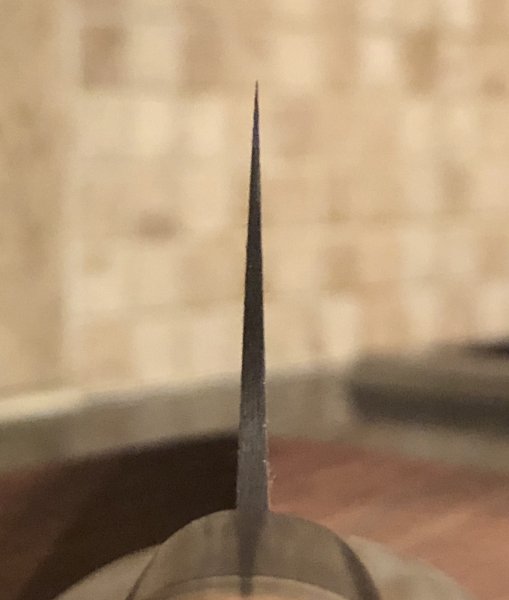 Another lovely knife! If you don't mind sharing, has the maple burl been stabilized, and what did you finish it with?

Caleb Cox said:
Another lovely knife! If you don't mind sharing, has the maple burl been stabilized, and what did you finish it with?
Click to expand...

Thank you! Yes, it's stabilised. There are very few non-stabilised woods that I'd consider using for a kitchen knife. I simply polished it on my buffing wheel with a couple of different wheels and compounds.

Here are two that I posted a while back without handles. I'll get some better shots and they'll be up for sale. And if anyone has suggestions for taking choil shots then I'm all ears. 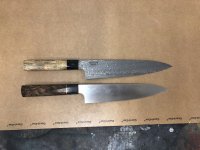 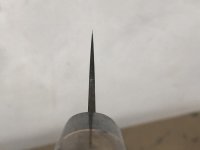 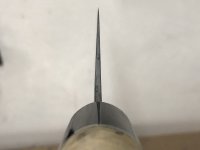 Beau Nidle said:
I know this isn't a kitchen knife but I thought I'd share it anyway. 9.5" bowie (15.5" overall). 400 layer san mai damascus with fitting of more damascus and silver.

This beauty was on a recent "viewer knives" video on Walter Sorrells' YouTube channel. Congrats on the recognition!

It is really cool of Walter to do this.

Caleb Cox said:
This beauty was on a recent "viewer knives" video on Walter Sorrells' YouTube channel. Congrats on the recognition!