I recently picked up both; to be perfectly honest I had had them both on my list and after getting the one had a bit of cerebral flatulence and forgot that Kagekiyo is presumed to be forged by Y Tanaka. So I found myself with an excellent opportunity for a side by side comparison. Both are Blue 1; the Hitohira is sharpened by Kyuzo, whoever he may be, and at least one Kagekiyo has been sold as forged by Tanaka and sharpened by Morihiro but I have no idea if this is known to be the case for other Kagekiyo or how to tell.

The Kagekiyo is 20g lighter; the Hitohira has a dark wood handle, presumably either ebony or Blackwood, that accounts for some of the extra weight and the difference in balance. The blades look extremely similar down to the finish but are visibly not quite identical. I took measurements and the qualitative impressions are validated as follows: the Kagekiyo is slightly taller at the heel, thicker over the heel but more tapered towards the point; the Hitohira bevels are not quite as tall and the wide bevel intersects the spine slightly more forward (tipward) than the Kagekiyo. I am not including a table because the difference in each measurement is no more than a few hundredths of an inch. I have the feeling that the differences are more subtle and complex than a simple linear extrapolation of a half millimeter in one direction or another. I think the Kagekiyo is flatter and the Hitohira has more belly, but I can’t say for sure this isn’t an artifact of my sharpening.

hitohira: black handle, marble ferrule, right side in the choil shots. Spines are hard to tell because the Kagekiyo is much more chamfered. 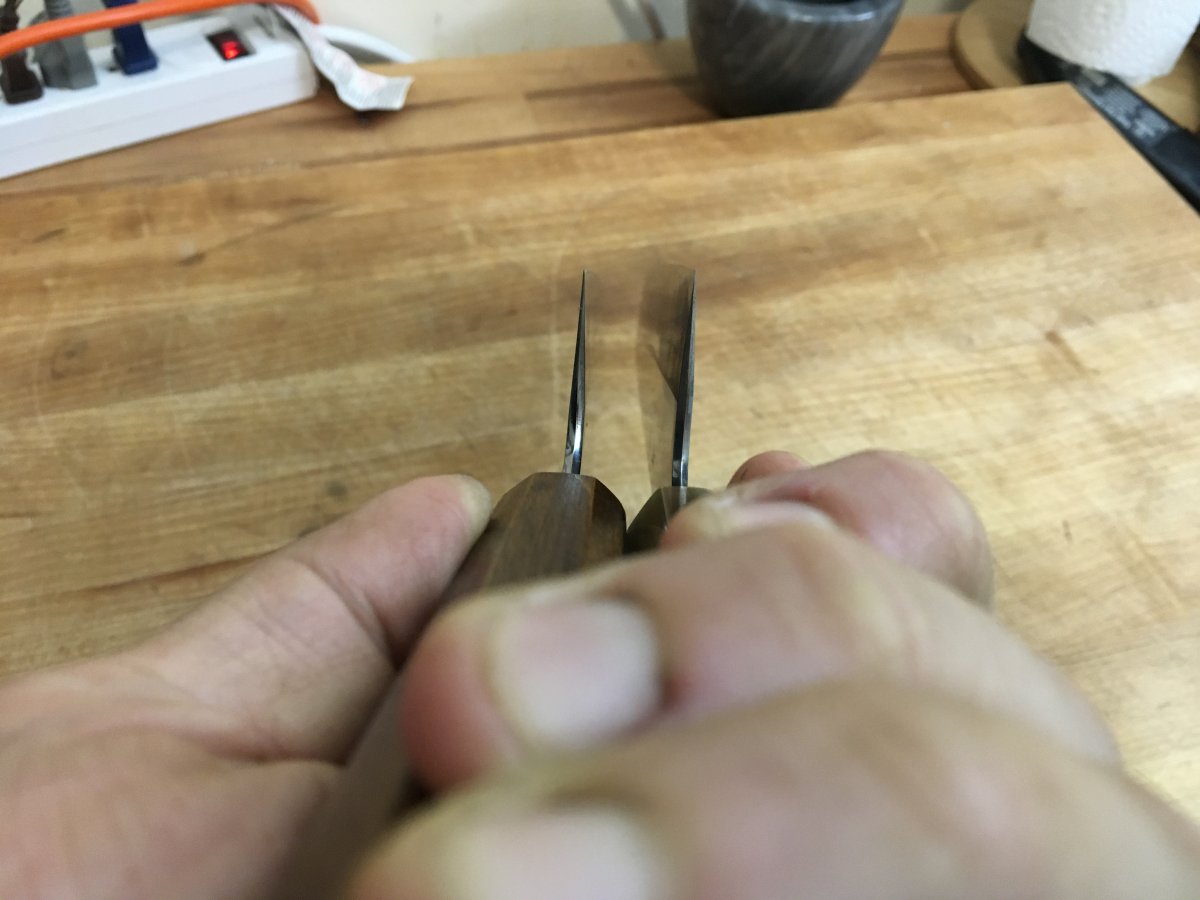 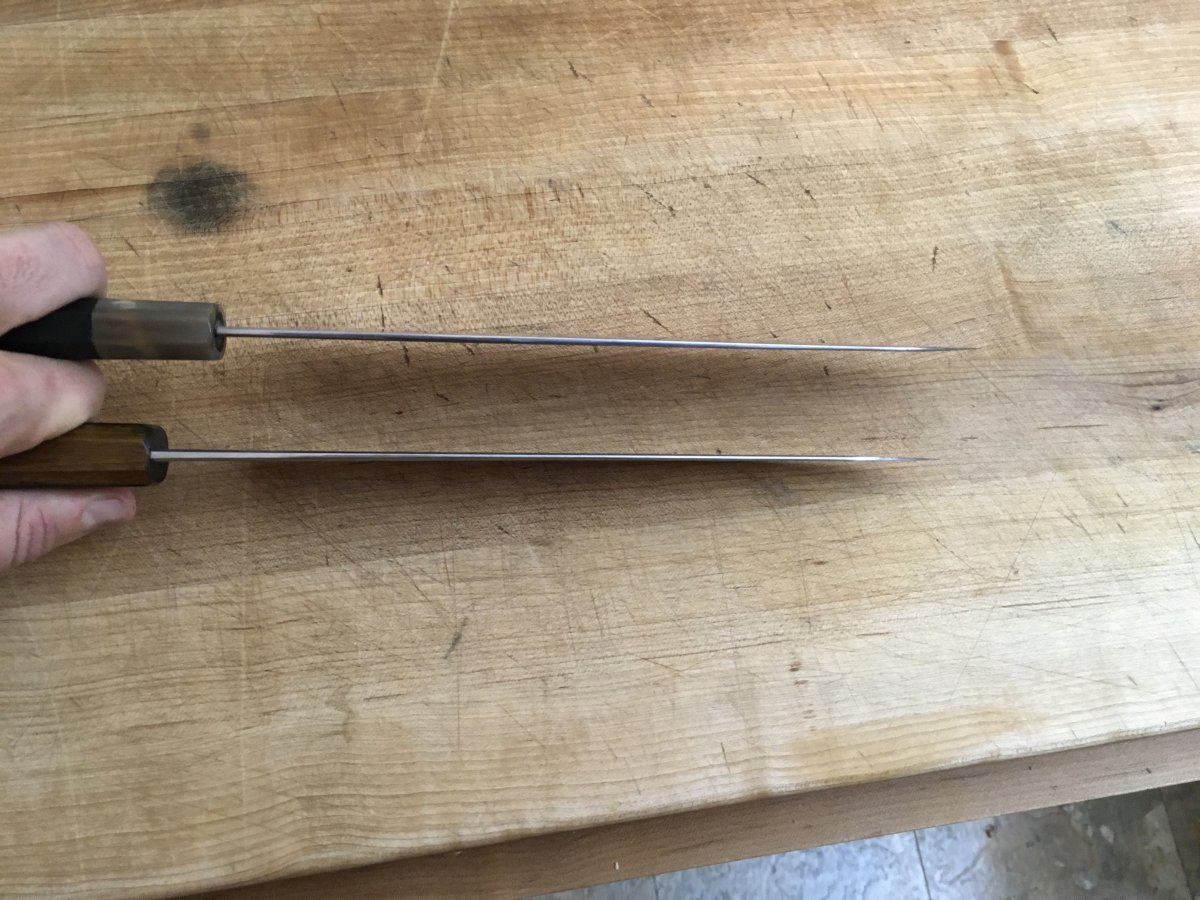 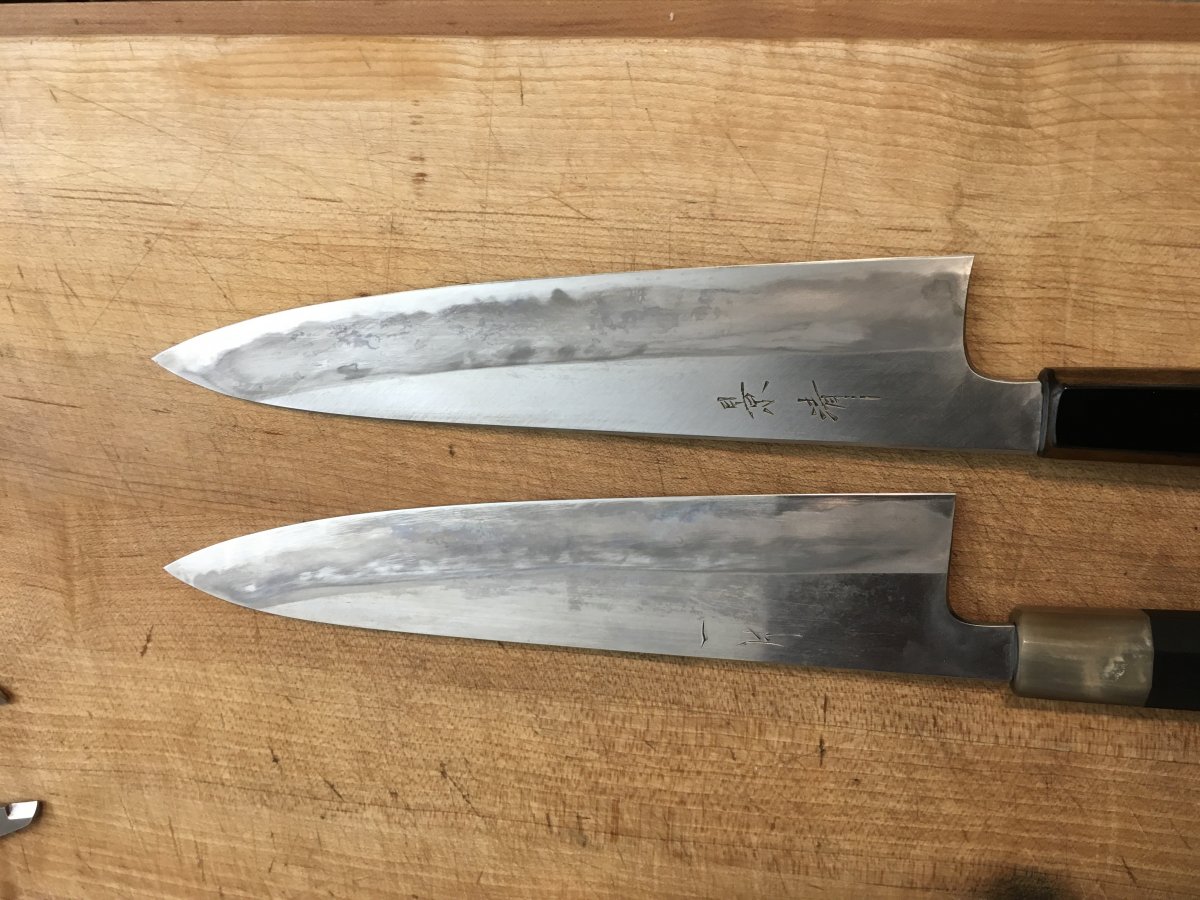 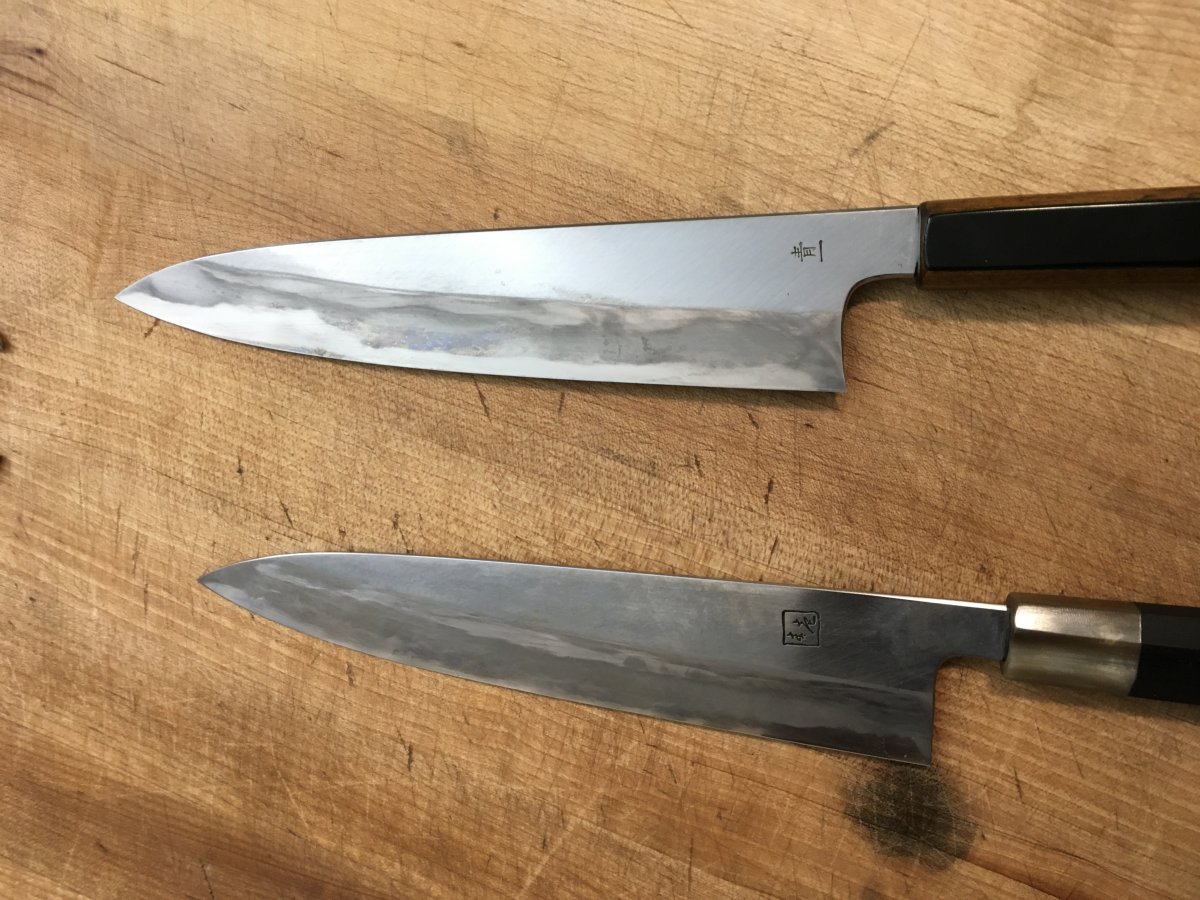 Unfortunately my current job (downtown Milwaukee) is doing just about sweet FA for business so I don’t have a really good test suite available. For now I made some Brussels sprouts with bacon and leeks and some small steaks, doing half of the cuts with each knife. As a general impression the result is again what one might think upon seeing and holding the knives: the Kagekiyo is slightly more laserish and the Hitohira does slightly more of the work on its own. The Kagekiyo is slightly quieter but slightly stickier. All the differences are certainly faint but nevertheless consistently perceptible. If I had both close to hand and needed to make a small number of precise, fast cuts I’d pick up the Kagekiyo, and for a longer task I’d pick up the Hitohira.

I wouldn’t call either one “better” than the other, and though certainly not identical there isn’t a clear reason to keep both — but neither is there a clear reason to let go of one in favor of the other. Eventually I’ll have to do just that though, otherwise I’d have to admit to being a collector.

Still denying your a collector

... Good comparison, I have a kagekiyo and was a little curious how it compared to those hitohira Tanaka.

Super interesting.
I really find it crazy that Old Fuji's are so valued ... but all these other knives are not.
Love seeing knives that are used/ Sharpened/ thinned and actually put to good use.

two real beauties you've got there.

do the photos exaggerate the marbling on the horn ferrule? if not that's quite characterful
G

I wonder where an old fuji falls on the spectrum; has anyone got one that they’ve compared to one of the newer Tanaka offerings?

in the last photo there’s some shadow and reflection on the ferrule of the Hitohira. It is a nice one though

I do in fact have quite large hands and those are Sakai 240 so around 230 actual heel-to-tip. Hahaha