This is the internet. Where are the cats?

i'm not a cat person. not even close. having said that, we have a cat. gray tabbie, female named Fergie. coolest cat ever. better recall than my dog. I say her name, and she comes running. she really has gravitated towards me, and not my wife. the irony, since my wife is the cat-person. she is getting so old now. misses the target on big jumps, and is losing weight. my vet said she is running down and to simply enjoy the time. I will know if we enter into the next phase. pretty sad.

this cat will sit on me any chance she gets. I buy extra sushi for her. I am gonna give her the best final year(s).

Fergie. her nickname is "NO-FERGIE!" since that is what we say the most. she chews on plastic like a drug fiend. no iPhone charge cord is safe. plastic bags? good luck.

she got lost a few months ago, and my wife found her on the internet - Next Door app. the person asked me, "how can you prove she is your cat?"
"okay, how many iPhone cords has she chewed up?"
"come get your cat...."
I showed up with the kennel and a few iPhone charge cords. we adopted her after she chose me. she was in the room..the last chance room. euthnasia after that. I walk in and was looking at another gray tabbie. cleaopatra or something. I felt a tap on the head and turned around. Fergie had her arm thru the cage and was reaching out to tap me on the head. I said, "this cat. well take this cat" 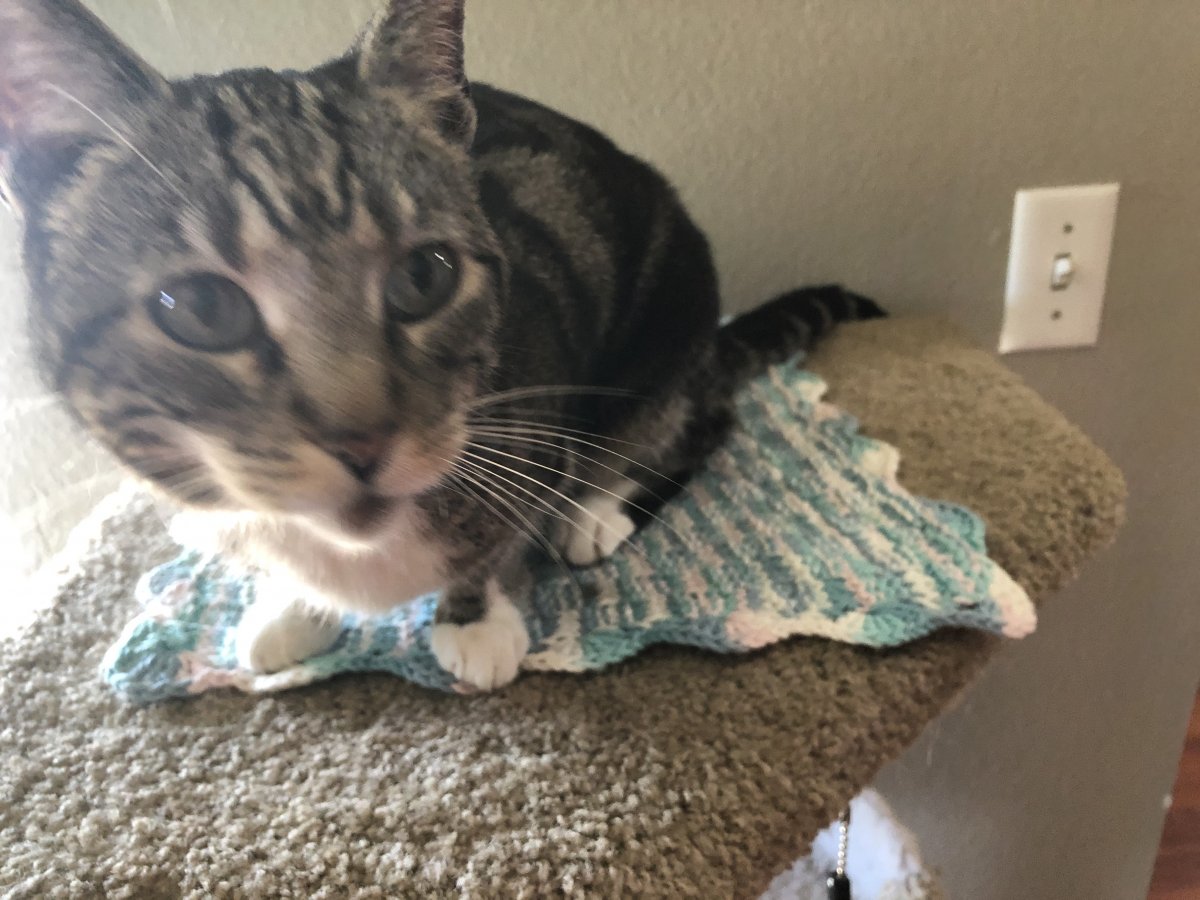 chefwp said:
Since they were brother and sister I challenged my wife and daughters to come up with known brother and sister names. It was either gonna be 'Lucy and Linus' or 'Luke and Leia...'
We did add a puppy to the mix last summer. The kids really wanted to add to the peanut gang theme and name him "Snoopy," but, well, no way... We did compromise on "Charlie"
Here he is peering into the cat door to the basement where the cats can take refuge from his puppy hijinks and their boxes are down there away from him too. He is "peering into the catworld!"
View attachment 128569
Click to expand...

I like your camera shots Lucy has that look on her face and Linus curled up in security blanket.

Charlie wants his friends to come out and play.

Just have one cat. Her name is Kali. She isn't too social, but does play with the dogs. Here's a good picture of her. Pure bred Bengal we got from the humane society. 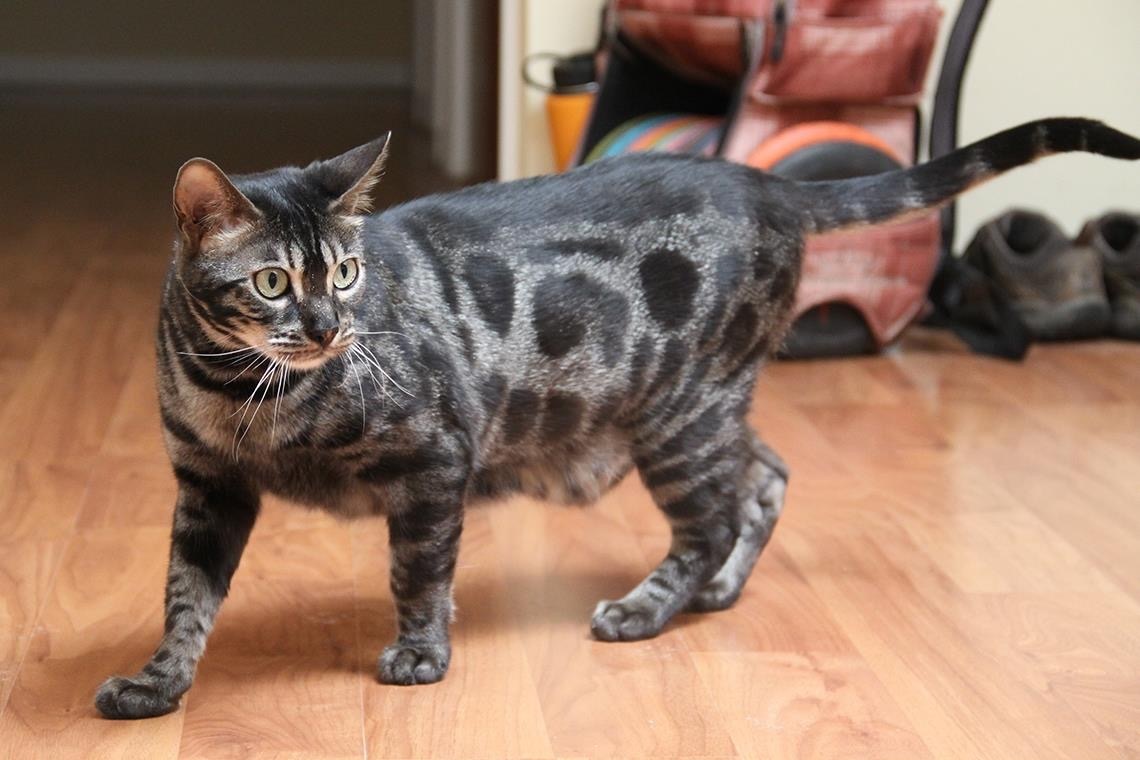 Keith Sinclair said:
I was trying to kickstart this thread after the dead cats on a table it stalled.

I know others on this forum have cat pictures.
Click to expand...

Yeah, that wasn't very appropriate at all.

Nina and Simone are litter mates. They are 12. We got them from a shelter when they were 6 weeks old. Their litter was found screaming in the closet of a abandoned house in Detroit. The mom had gotten in there or gotten locked in there and had the babies and couldn't figure out how to get back out. She died but all 6 kittens lived. Nina has a lot of dog characteristics. She loves to play fetch and comes running when I call and would sit in my lap 24 hours a day if I would let her. Simone is a scaredy cat afraid of her own shadow who loves to have her whiskers brushed. They kiss and cuddle constantly especially during the winter. 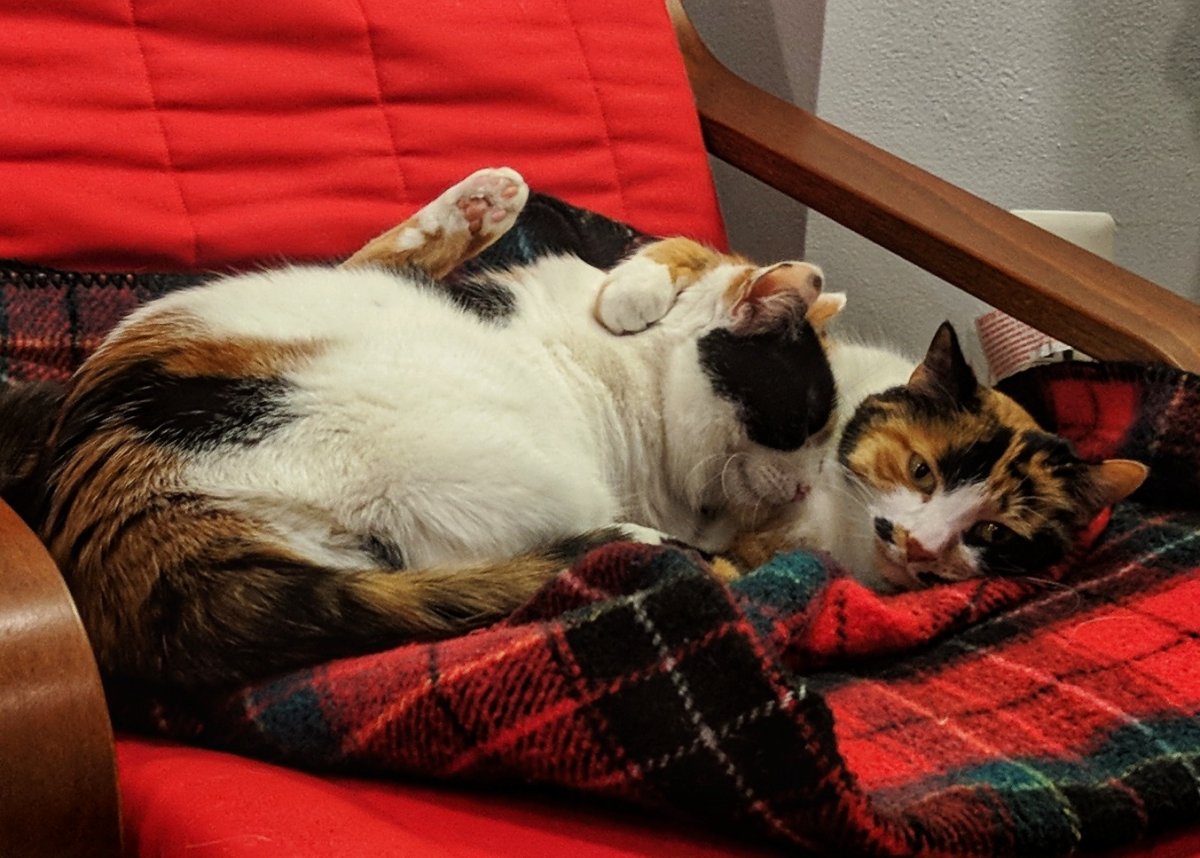 Dug up an old one of my cat Ivan. He is now 14 years old and still loves to relax but this is definitely my favorite picture of him 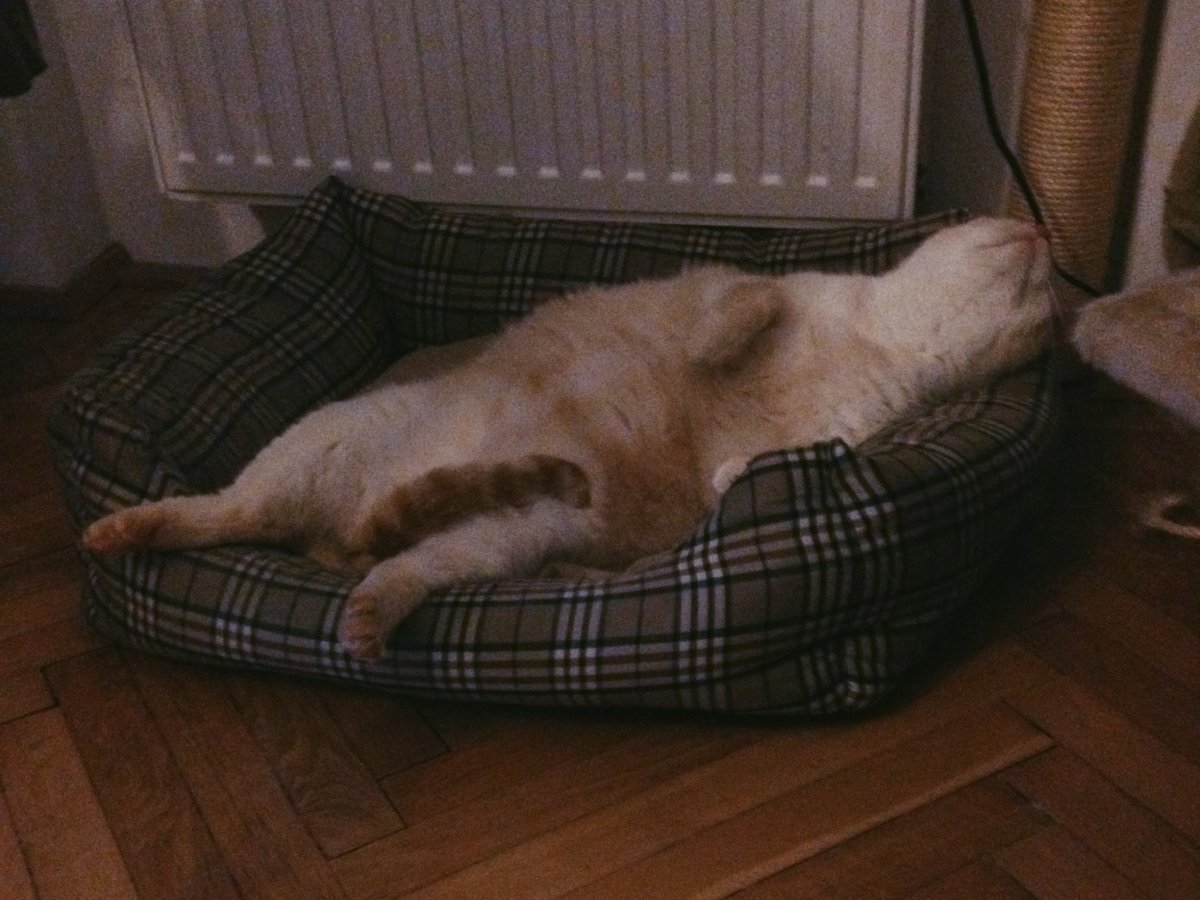 Here's another picture that I enjoy. Just to show you that she thinks she runs things. 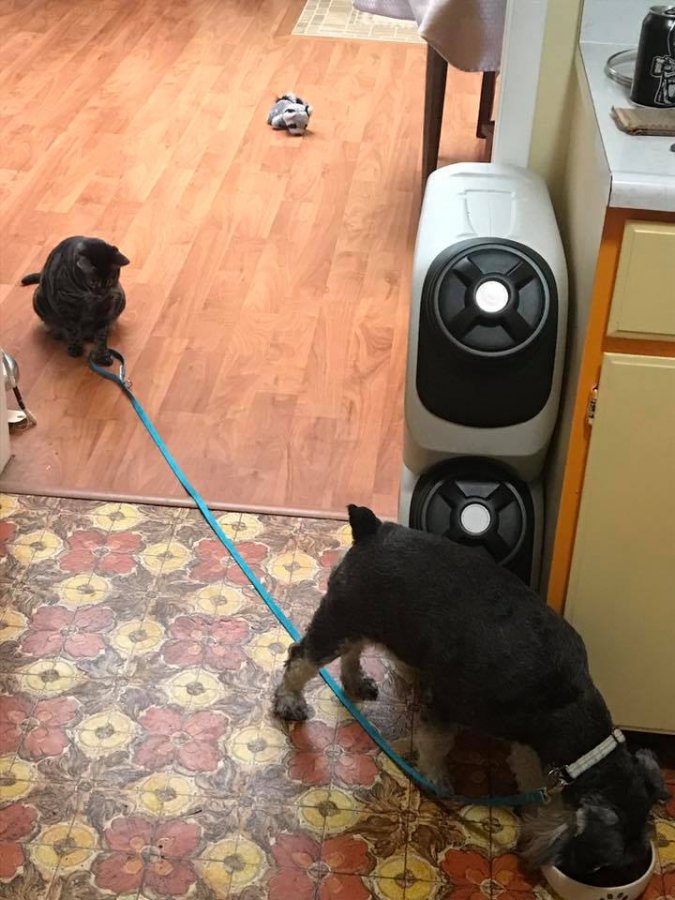 Here's mine right now. Napping on the bed. Her name is ushi btw, its japanese for cow. Unfortunately the dude that gave her the name died a month or two ago. 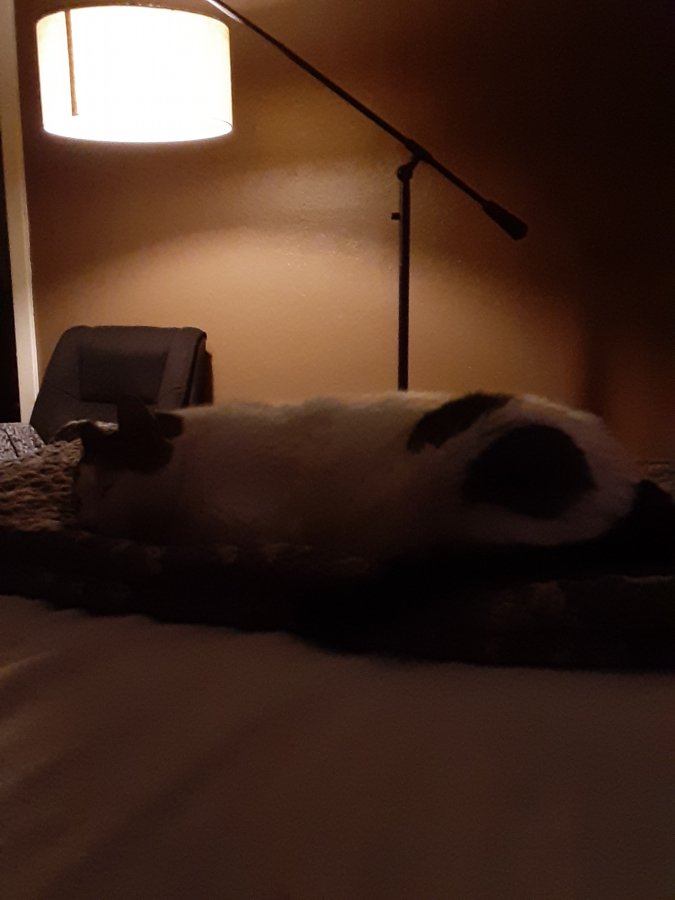 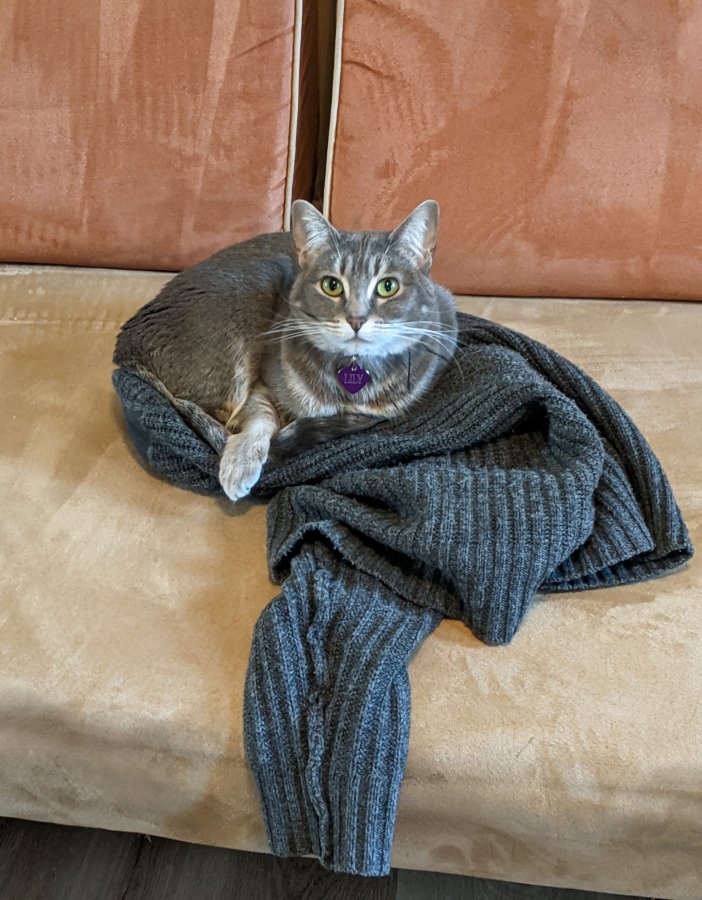 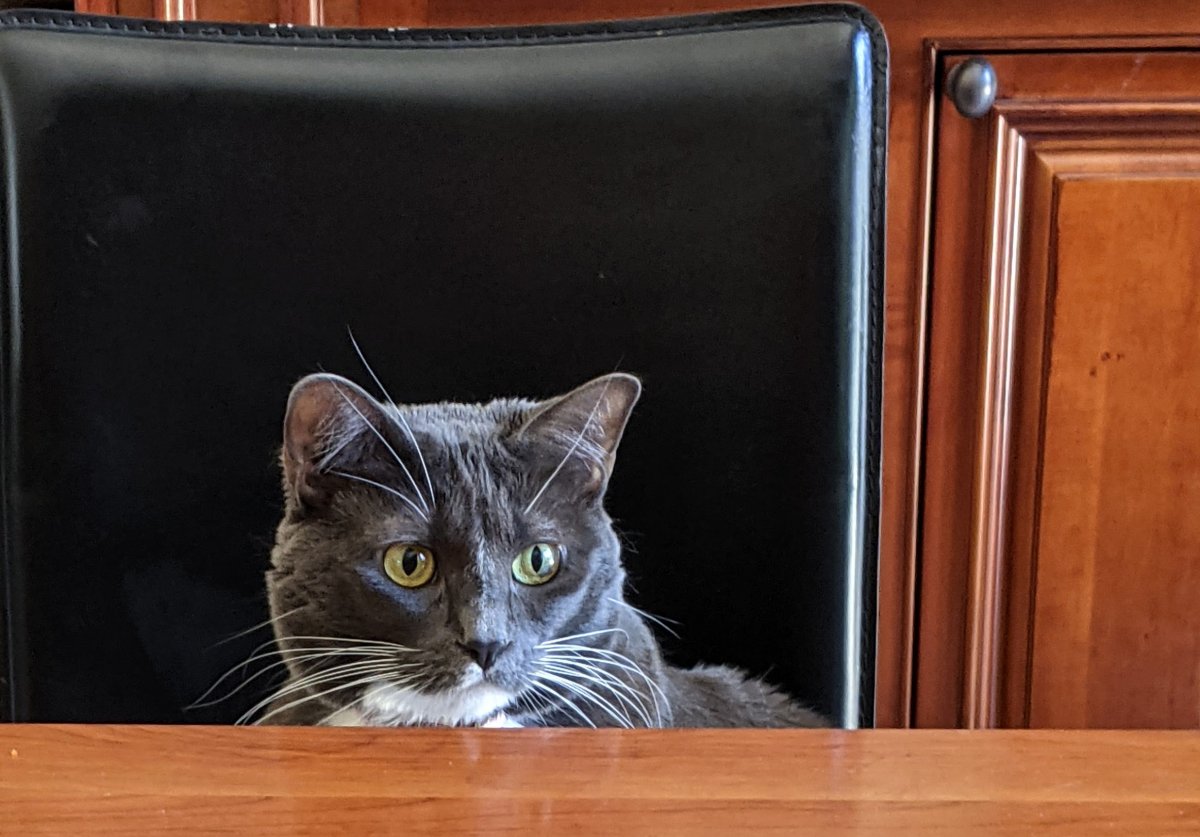 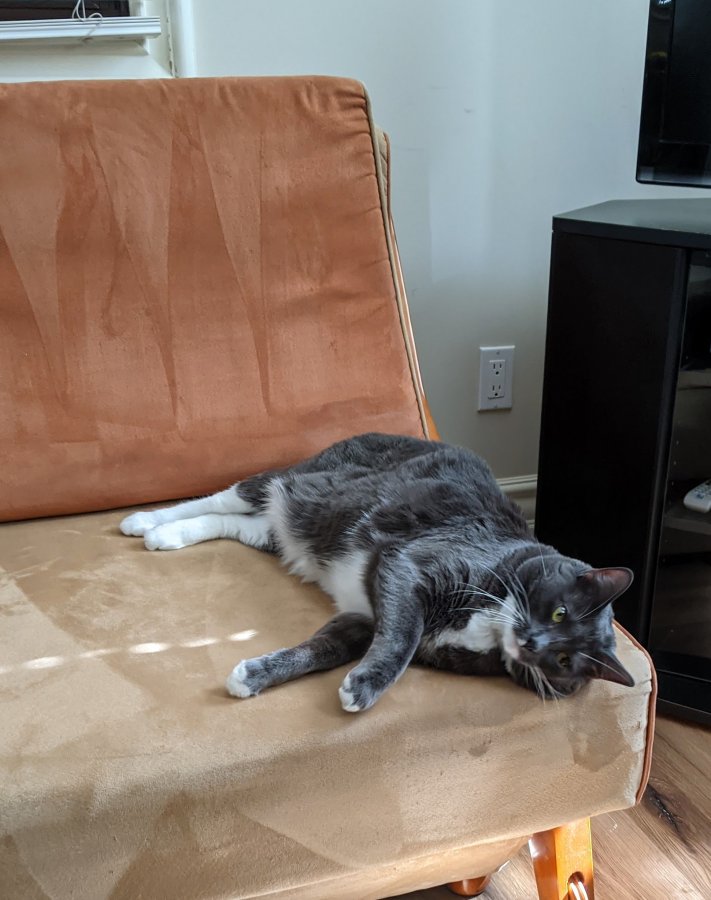 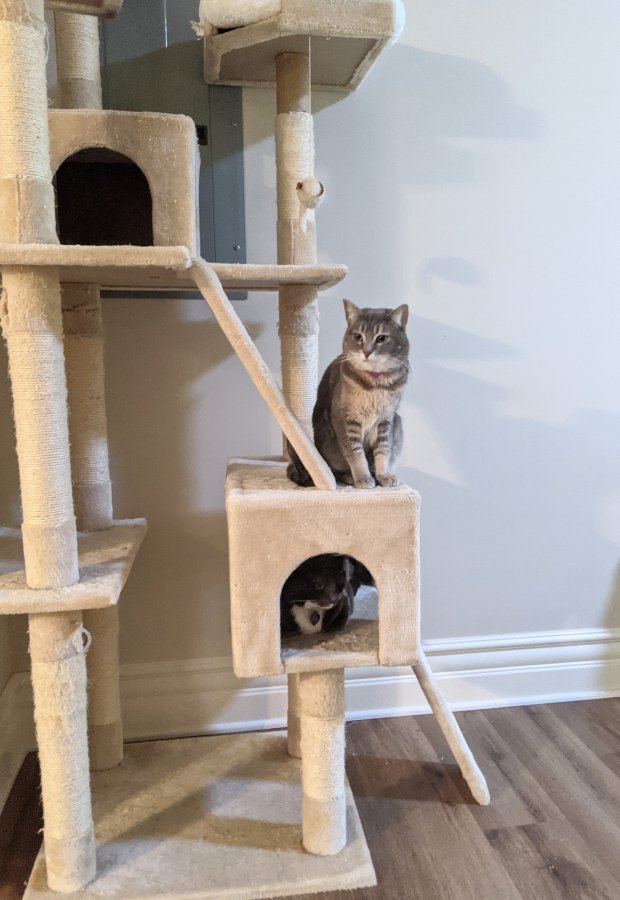 Pete the trash panther (found as a pup in a restaurant parking lot a couple years ago) says hey! 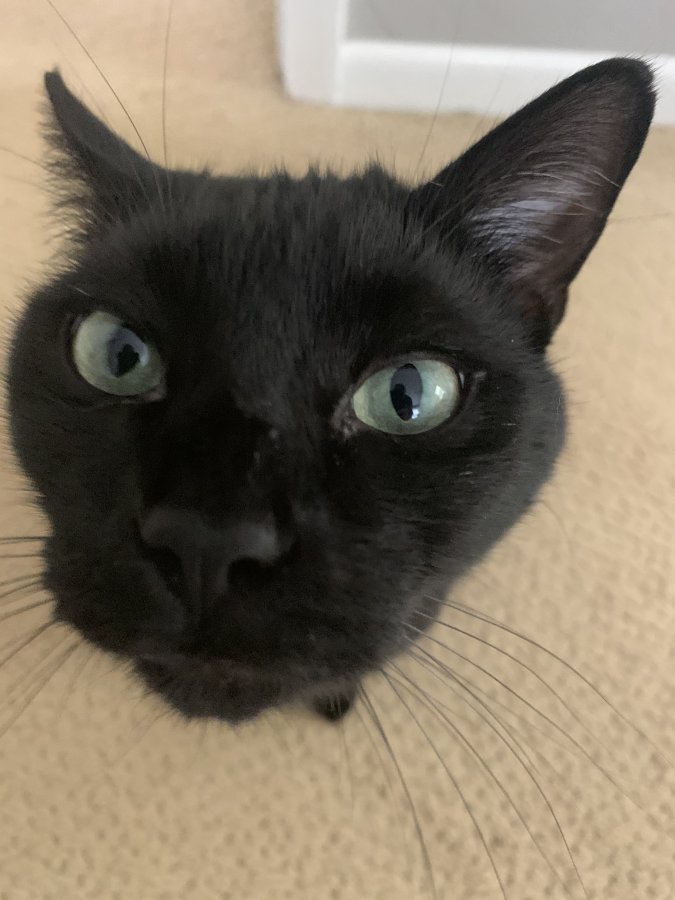 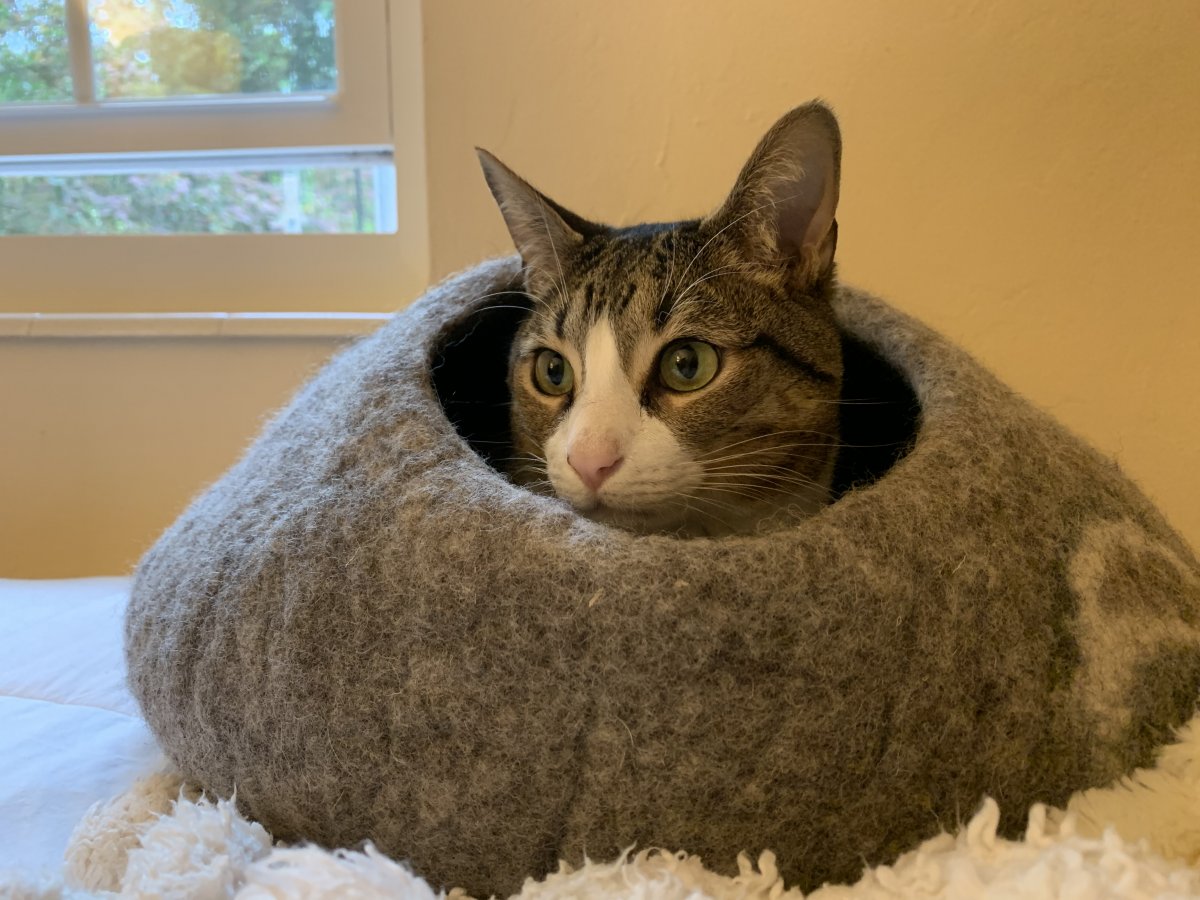 4 cats here,,,,,, 3 were abandoned cats that showed up on my patio and decided to stay, and one that was born here.

Cali is a small calico (but she's also "da boss"), and unknown to us, she was pregnant at the time she showed up. Her sole kitten is a female orange cat named Nikki. We also have an orange male (named Potter) who appears to be Nikki's "daddy". (they look nearly identical)

Potter was given his name after being found curled up in a flower-pot on my patio, trying to get out of the wind during a wicked winter blizzard. He's probably been here for 12 years or more.

Our latest arrival,,, is a large female Tuxedo named Sassy,,,, one of the smartest cats I've ever come across. Beautiful cat with a great temperament,,, she was declawed and micro-chipped, and would probably not have survived the entire winter if left outside. She was fully grown, but,,, weighed as much as a bag of feathers when I found her. We took her to the vet to get the microchip read, but the chip rendered undecipherable code, so we couldn't find the owner, and decided to keep her. She has fit in very well with the other cats.

Worth mentioning, I get a lot of racoons and deer visitors. I've had as many as 10 deer standing in a 30 foot circle in front of my living-room windows. The deer show up mostly in mid-winter, to graze on my lawn and eat the shrubs.

The racoons show up from early Spring, 'til early winter. The females get to know me very well, and in Spring-time, they bring me their new babies so I can baby-sit while momma loads up on some much-needed food. The mothers trust me completely, and the little ones are just sooo curious. They come right up to me to smell my feet,,,, and they'll actually climb my legs if I'm preparing plates of food for them. I've got one pic (if I can find it) where there are 19 racoons at my feet while I'm standing out on my patio.

I think there's something very special and "good Karma" when you can earn the trust of a completely wild animal.
Last edited: Jun 9, 2021

Our tortie George is known as “bossy girl” because she rules the roost. She’s under ten pounds but owns the boys who are all damn close to twenty pounds each.

Here she is letting Jensie snuggle. 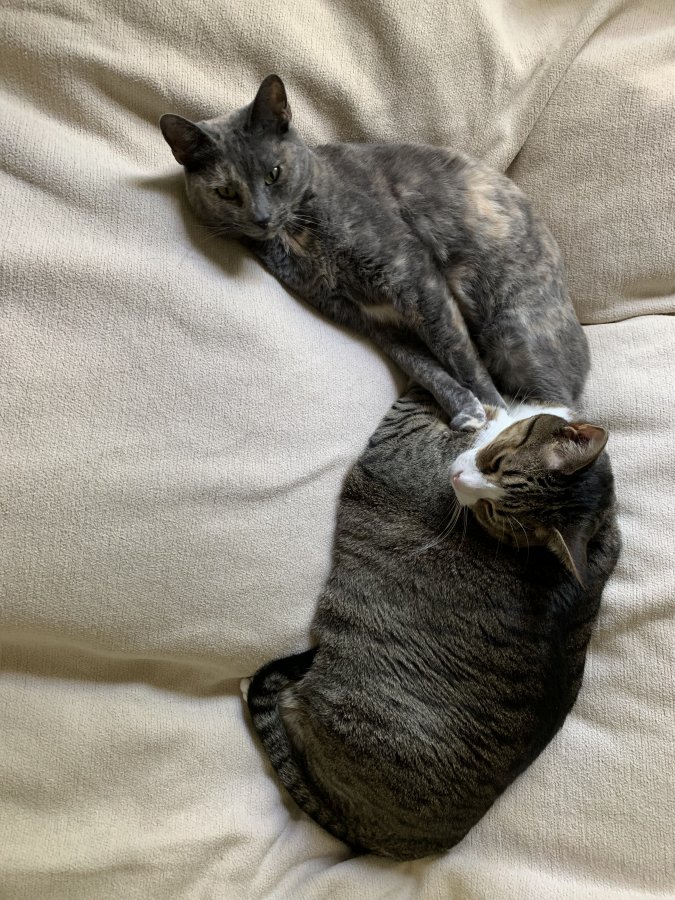 And a glamor shot. 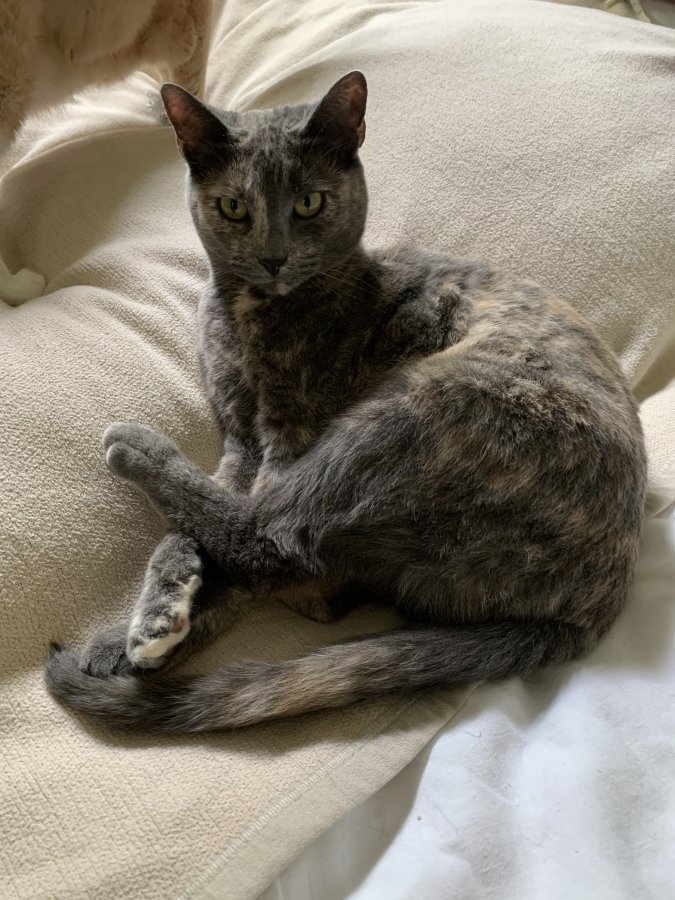 That's cool. Rescued mammals of all kinds as babies bond with handlers. Even big cats.

That guy Kevin Richardson from South Africa
called lion whisperer only interacts with lions he has known as small cubs. When saw him on 60 minutes I thought holy moly, looked him up on line. He has detractors who say it is serious risk esp. for others who think they can cuddle with big cats. He is on UTube as well.

Many large cat species are under pressure in the wild. We have dominated the planet it is animal lovers & dedicated scientist who offer hope of preserving wild animals.

See this is why I started this thread. I don't know why some people are full of hatred, and cold hearted. But the ones that do things for animals like this, and actually care are what make up for those others.

Thanks to everyone who decided to participate in this thread.

Last several thousand years is just a spec in time. Egyptians worshiped cats because they were planters & cats hunted.

Man's relation with the first wolf's goes way back. They were a great aid for hunter gatherers because of their sense of smell and natural pack hunters.

Going farther back in time upright walking Hominids were easy prey for the big cats.

I'm about to jump to 5,,,,,,. There's been a young female hanging around for the last two winters now. She was until recently, almost impossible to approach,,,, very skittish,,,,hissing and growling,,,, BUT,,,, she's undergone quite a turnaround in the last few months, If I'm working out in the yard, she follows me like a puppy-dog. She's also re-invigorated my old neutered male who is constantly scanning the bush, waiting for her to show up. I feed that male on the patio, and he always leaves half of his dish for her,,,,,,, (he's a smoooooth operatorrrr!!!) She's gotten to the point where I can give her a head-scratch, and she'll lay down next to my chair when I'm sitting out on the patio, but she's still very jumpy if I move suddenly. Patience and a soft voice = progress.

Hi Keith,
I'll try my best, but it may take a little while. All my pics were stored in my old desktop, and I fried the power-supply. I've got to bring it in for repair, to try and salvage my hard drive. Although,,,I may still have some of those pics stored in my camera memory cards. I'll look this weekend. I'm going for Covid-19 vaccine dose #2 tomorrow. Pfizer. 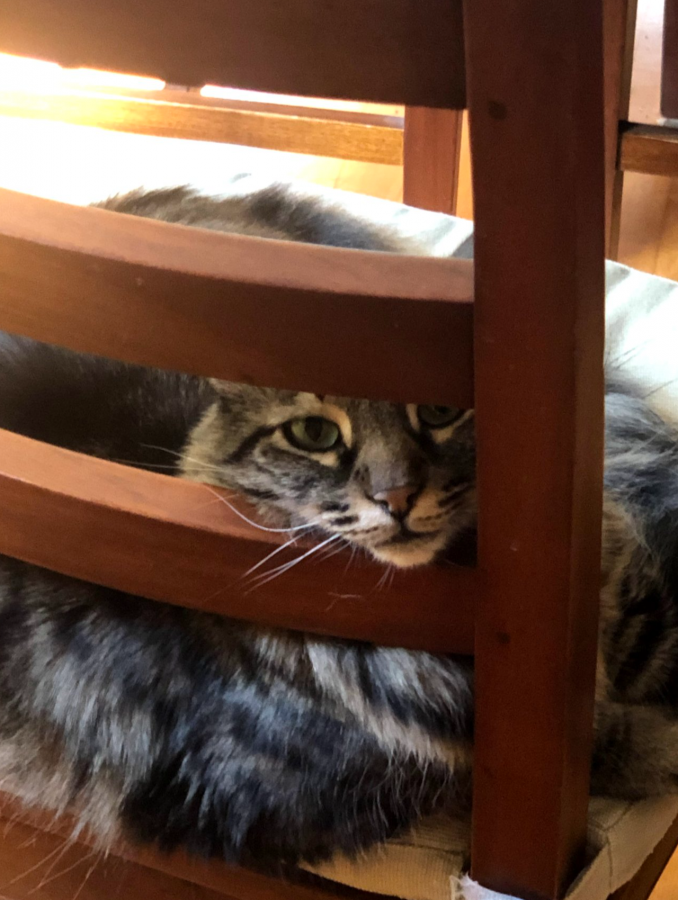 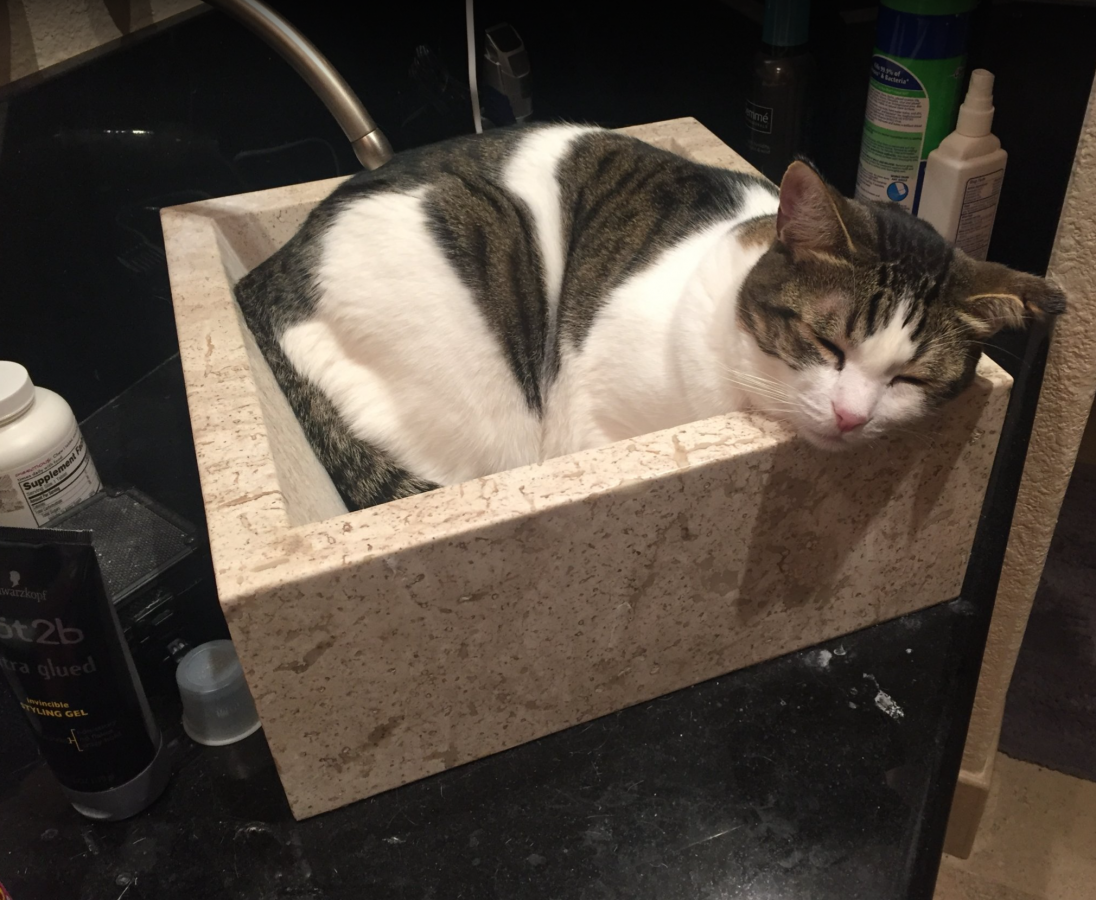 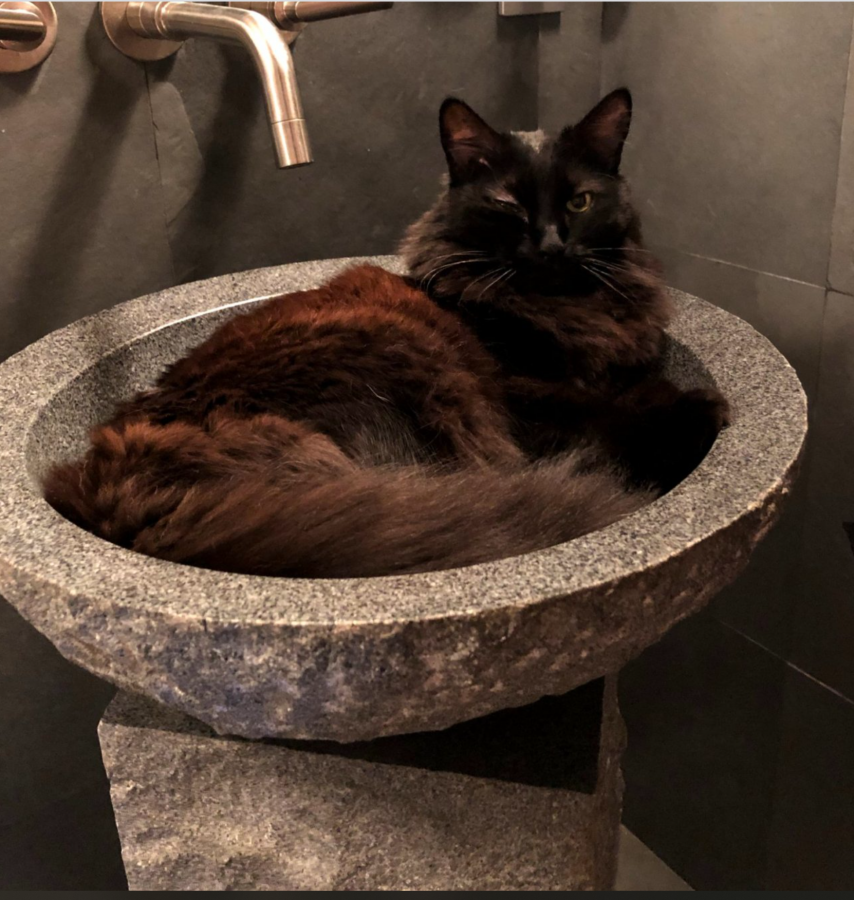 are these maine coons?

inferno said:
are these maine coons?