I have been thinking of adding a 180mm Gyuto to my rotation. I realize that most of the topics on the board tend to be how to get bigger knives but for more delicate work, vegetables, fruit, working in smaller areas on smaller boards I was wondering if any have thoughts on this size and any particular makes that they would recommend?
R

I find the size super useful as a line knife, or for small, quick jobs. Mazaki 180 petty was my longtime go to, at almost 40mm tall and a bit oversized it's almost as big as my ginga 210 gyuto but very nimble. Speaking of, I had a stainless Ginga 180 that was great, sold it off to a coworker who didn't have any decent knives but ended up replacing it with the 210 shortly. Wakui looks like another great option, haven't used this size from him but extrapolating from my experience with other Wakuis I wouldn't hesitate to jump on one. Tanaka vg10 with the western handle would be my budget pick, big fan of those as well. That's another one I passed along to a friend in need of a solid blade, but often considered replacing. Takamura r2 would be worth a look for delicate work, but it's definitely not as tough/forgiving as the Ginga. If you have the budget and don't want any flash it'd be hard to top the Ginga for this purpose. Won't keep an edge like Takamura but it holds up alright and Ashi stainless is nice and easy on the stones ime.
L

I have the Mazaki 180 petty, and it's a bit too low for my chubby fingers to be used for chopping on the board. The Munetoshi 165 petty, on the other hand, feels like an actual mini-gyuto that I can work with on a cutting board, and I can highly recommend getting one.

I used to use https://www.japaneseknifeimports.co...0-wa-gyuto-no-box?_pos=4&_sid=5bc0a4f6f&_ss=r as my small gyuto and it worked very well for me. Especially when traveling and staying in at apartments or houses. I find this size very useful when you don't have space. Now, I have a 180x45 custom that I use for this purpose and it also works very well. 40mm or so at the heel makes it possible to use it on the board.

I live in a small space and use a 190 Laseur... works great once you get used to the lighter weight and slightly difference balance point.

I have had or have quite a few 180 guutos and use them a lot. Some of them have already been recommended, I would also recommend a couple of budget knives, Fujiwara Kanefusa FKM and Misono moly, both AUS8 stainless. The FKM Is more robust, I keep an 800 grit edge on it (Shapton pro 1000) and use it for butchery and small tasks like making an omelette including dicing cheese; it also has a larger handle. The Mosono moly is more nimble, thinner, lighter with a smaller handle, I keep a 2000 grit edge on it (Shapton pro 2000) and use it for more delicate tasks like cutting the skin off if a cucumber and slicing it for a salad, and mincing a few herbs. Both available at JCK.

Love 180-190 gyutos, especially combined with a larger gyuto (230-250) for bigger stuff. Have a small one at hand for small meals typically.

What are the pros and cons between a 180mm gyuto and 180mm santoku?

I have two Tanaka 180-190 Gyutos. One Yo Ginsanko, the other Wa Blue Damascus.

I like them a lot, but they are completely interchangeable with my 210s.

The only one that really feels any different is the Kaeru due to its girth.

CiderBear said:
What are the pros and cons between a 180mm gyuto and 180mm santoku?
Click to expand...

What do you mean??? Santoku is obviously a girl knife


Both can be used in place of each other, gyuto usually has a more useful tip, so could be a bit more versatile, not always though.

I use 180mm at home. Good size for my board and sink.
I have 4 very different ones: 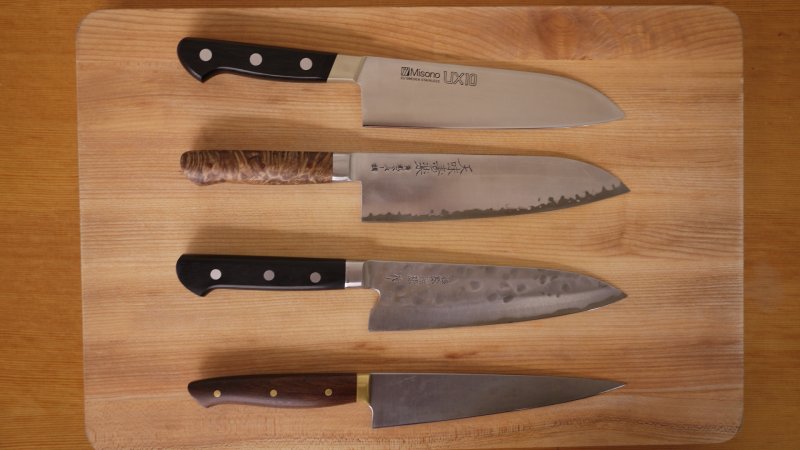 ^^^^ Nice handle on that Hiromoto

I personally find 180 gyutos a little restrictive, but I think a lot depends on your cutting style ie chopping vs push/pull cuts. I would say a shorter Santoku is more useful than a short Gyuto. YMMV

CiderBear said:
What are the pros and cons between a 180mm gyuto and 180mm santoku?
Click to expand...

As a home cook, I like using 160-190 mm guyto/bunka/chef's knife when I am working on a small cutting board. Larger knives don't work as well on a small board for me, especially for rocking and guillotine & glide techniques.

No particular suggestion from me, though I would suggest checking if you will have enough knuckle clearance for any option you consider as it could be a problem depending...

Not sure about those numbers. Plenty of 180 Gyuto's out there close to 47mm+ height eg TF Denka/Mab etc.

Corradobrit1 said:
Not sure about those numbers. Plenty of 180 Gyuto's out there close to 47mm+ height eg TF Denka/Mab etc.
Click to expand...

In general, i do find HRC to be correct. There for sure are exceptions though.

Both my 190 Tanakas are in the 45-48 range, although i understand Tanakas tend to run tall 99% of the time. I do have a pretty old 240 Tanaka Gyuto, that is MUCH thinner than what is being produced now, 50mm at the heel and is actually Lefty-ground.

My Tsukiji Masamoto, and Ginga 210s are both in the 43ish range

I really like the little 180mm TF gyuto I brought back from Japan. I use it more than my 240mm Blazen, although the bigger gyuto comes in handy occasionally. I'm looking forward to getting a good 210mm knife. My 8" Henkels chef's knife used to be my go-to, but I've been forcing myself to use my more recent Japanese knives to make sure I know which size I want Mareko Maumasi to make my "last and final" chef's knife.
I

Tough to decide for a particular length. I would say it depends on the available board and counter space. So, in general I would grab a 240, but I also love my 210s and even shorter blades. I really like to pick whatever I am in the mood for... At my gf's place, we only have a smaller board and the kitchen is tiny, so I usually have a 180 there.

ACHiPo said:
I really like the little 180mm TF gyuto I brought back from Japan.
Click to expand...

I thought you bought that little 150mm Denka Urushi from TF...I almost grabbed it last April...

I've been resistant to buying a 180 gyuto, since I'm worried about the lack of any flat spot. Huge bellies turn me off, at least when it comes to knives.

I enjoy the Maz 180 petty, though, and my 180 nakiri, and would probably like an appropriate santoku too. A 180 gyuto with a super flat profile might be good, though, although maybe you'd just call that a santoku...

I keep a 180 gyuto in my catering kit for last minute jobs. Good to have when your work space is about the size of a cafeteia tray. Mine's a Suisin IH, also have a Wat that may get to play this season.

ian said:
I've been resistant to buying a 180 gyuto, since I'm worried about the lack of any flat spot. Huge bellies turn me off, at least when it comes to knives.

I enjoy the Maz 180 petty, though, and my 180 nakiri, and would probably like an appropriate santoku too. A 180 gyuto with a super flat profile might be good, though, although maybe you'd just call that a santoku...
Click to expand...

Anyone have any experience with Mutsumi Hinoura 180mm knives?

MarkC said:
Anyone have any experience with Mutsumi Hinoura 180mm knives?
Click to expand...

His iron clad Shirogami 2 gyuto is a great knife. His 150mm petty knives are nice and tall too!
Wakui is another good Sanjo style option if you prefer stainless clad Shirogami 2.
Last edited: Sep 10, 2019 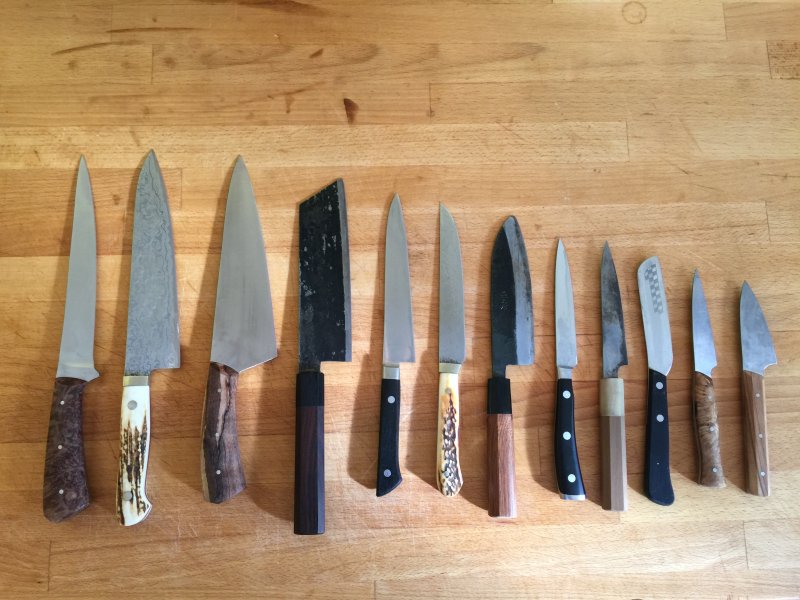 I love 180 gyutos. Use them at home and it’s my go to choice for gifting to home cooks.

My favorite is a mr. itou with a stag handle. The Harner and takeda in the pic were fun too.
Last edited: Sep 10, 2019

Stephen Fowler, suisin high carbon, carter. The suisin is a great knife for the money and is super durable because it is not super hard. 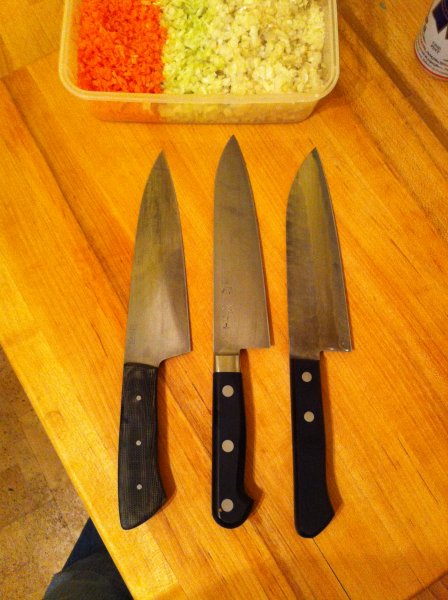 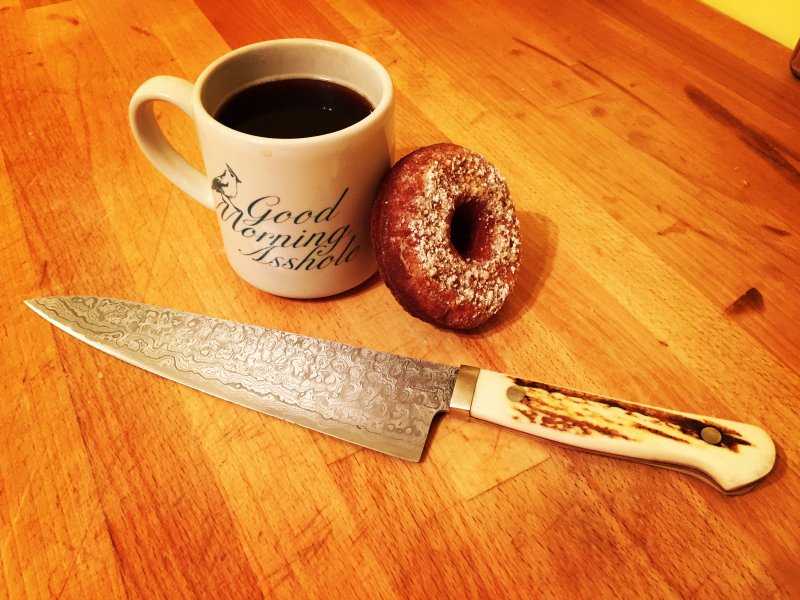 If any 180 Gyuto experts see this, I would love to figure out who made this and how I can get one. 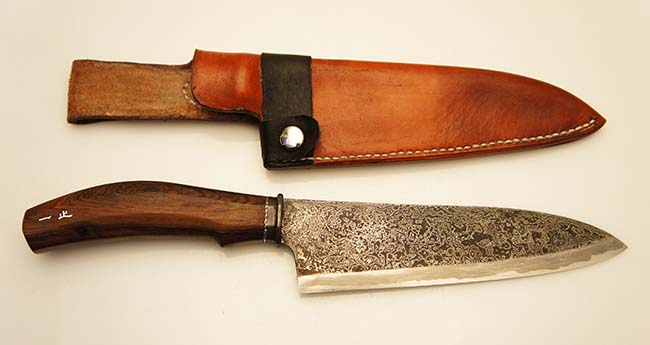 Watanabe is a very classic and classy option for this size as well.
Last edited: Sep 10, 2019


If any 180 Gyuto experts see this, I would love to figure out who made this and how I can get one.

Was that mug a gift from your wife? Love it


If any 180 Gyuto experts see this, I would love to figure out who made this and how I can get one.